Growing Up Poor in ‘80s Mansfield 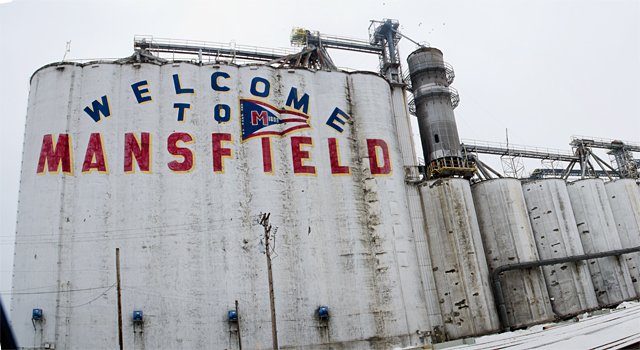 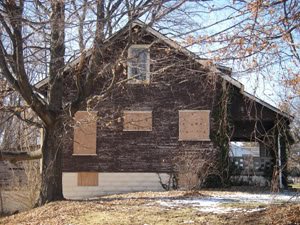 The author’s childhood home in Mansfield, Ohio. Photo courtesy of the author.

I grew up in Mansfield, Ohio. Small enough to recognize the names on businesses as family names of schoolmates; a realty company, a dentist, a chain of funeral homes. But not so small that everyone knows your life. The urban city center is small and tight, surrounded immediately by suburban neighborhoods on one end and poor, multiethnic neighborhoods on another. My father grew up on the latter side of town, with immigrants working manufacturing jobs and the neighborhood as tough as the times. Strife between the immigrants and the African Americans, who had been there longer, was a reality. Dad and his brothers were in a lot of fights, which my father parlayed into boxing at the neighborhood gym. When you grow up fighting, it sticks—he was expelled from high school in the tenth grade for punching his gym coach. He taught me to be a fighter.

[blocktext align=”left”]The middle-class girls acted friendly, but didn’t include me. The lower-class girls all wanted to fight with me.[/blocktext]Mom grew up in a Depression-era family in neighboring Ashland, a smaller, gentler, and closer town. Mansfield was never her town, but she did her best to make it her home when she settled with my father. My Mom had my sister in 1965 and me in 1969, the year of Woodstock. But there was no hippie idyll in Mansfield. Mom taught me to survive.

We were poor. There were those worse off, sure, but it seemed all my schoolmates had more than we did. Early on, clothes were homemade, and when Mom had to go to work and no longer had time to sew, we relied on Goodwill. Board games without key pieces, stuffed animals missing eyes; I never had the “right” clothes. In middle school, I had one pair of borderline “designer” jeans, de rigueur at the time. “Didn’t you just wear those a couple of days ago?” a girl sneered at me while we waited for class to start. Everyone stared. Instead of telling her to fuck off, I turned away, embarrassed. I wanted to desperately to fit in. I hadn’t figured out that I never would, because I wasn’t like them. The popular, rich girls, with their hot rollers and beautiful clothes, tolerated me but were never welcoming. The middle-class girls acted friendly, but didn’t include me. The lower-class girls all wanted to fight with me. I settled with the orchestra nerds, the viola an outlet for my creative side.

[blocktext align=”left”]Poorer meant angrier. Endless Saturday school, a trip downtown in the back of a cruiser for “inciting a riot” after a big school game, where my fight with another girl turned into a melee.[/blocktext]Being poor made me angry. I felt it was the reason I couldn’t belong. I was teased about everything, all tied to money: my crooked teeth, my shitty, rusted bike. Mom tried to teach me that being different was good, but I didn’t get it for a long time. She bought me a beautiful outfit one year for my birthday: velvet, paisley-patterned gauchos, cream-colored hose, and a matching, cream-colored blouse. I was teased so mercilessly the day I wore it to school that I never wore it again. In high school, I was voted Worst Dressed, among other insults. By that time, “fuck off” flowed easily, so I told them to find someone else for their yearbook of humiliation and shame.

Money got worse after the divorce. Mom worked as a short-order cook at the L&K, and I got a job as soon as I was old enough, at Hardee’s. My temper got me fired after four days, so I went across the street and worked at Wendy’s for more than a year, until I had to leave because my boyfriend, who also worked there, beat me up in the parking lot, slamming my head against a telephone pole. I got written up because I was in uniform; time to quit. My paycheck went to Mom. Other kids bought new jeans or saved for college, while my money went to the electric bill or to reinstate phone service. We slept at my aunt’s more than once because we couldn’t pay for heat and it was too cold to stay home. We ate a lot of Ron Reagan cheese with spaghetti, and I was regularly humiliated in line with Mom at the grocery store checkout when she would tear out the food stamp coupons  from their little booklet. You had to tear them out at the register. I would furtively look around to see who knew me, if they could tell that I stuck steaks under the big bag of cat litter in the bottom so we could have meat. I got busted shoplifting at Woolworth’s and the guard wanted to know why I stole gloves and a hat. “I’m cold,” I exploded at the guy, and burst into tears. They let me go.

[blocktext align=”left”]I grew up and moved on, while Mansfield shrunk. During my infrequent visits now, the city seems full of scars. [/blocktext]Poorer meant angrier. Endless Saturday school, a trip downtown in the back of a cruiser for “inciting a riot” after a big school game, where my fight with another girl turned into a melee. The time I ripped a two-by-four off the facade of a bar to chase a girl who was hitting on my boyfriend, who was in the band I lived with for a time. Things progressed—the fencing ring, the drugs, the time we went to someone’s house with rifles in the backseat. Idle hands. 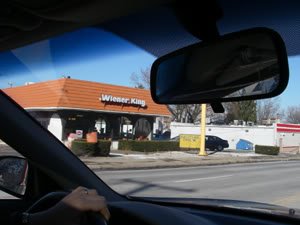 The Wiener King in Mansfield, Ohio, is still open. Photo courtesy of the author.

My sister practically forced me to leave and go to college, which frankly saved my life. I grew up and moved on, while Mansfield shrunk. During my infrequent visits now, the city seems full of scars. The camera shop my Dad’s friend ran, where we would hang out, is long gone. The plant where my grandfather worked is nothing but a rusting, empty hulk. My middle school—torn down, and the pool behind it where I spent every summer nothing but a big patch of grass, as if it never existed. My childhood home is condemned and boarded up, with stray dog shit all over the huge, sad yard. The L&K closed long ago; an internet betting shop sits directly across the street in an old Pizza Hut building. But some things still remain, including some of the people I went to school with, who resolutely hold up the American Dream by virtue of their very existence, working their asses off, raising their kids and grandkids and doing their best. I went into my elementary school after it had closed for the year and was amazed how little had changed in the forty-odd years since I started there. It was so small and quiet as I walked the halls. I could smell my 2nd grade teacher’s perfume. Kingwood Center still bursts with flowers every spring. “The Coney,” where I spent many hours with my Dad and his friends, has been renovated with shiny, art-deco sparkle. I bet they don’t give you a paper straw anymore.

Nina McCollum is a writer living in the Cleveland, Ohio, area.