Hardboiled Coffee Company opened on a cold February day in 2013. I stopped by a few days before and found the doors locked and no one inside. I was so eager for a real coffee shop in Beverly, I didn’t check to make sure of the grand-opening date. I came back a couple days later and wound up sticking around for the better part of a year. 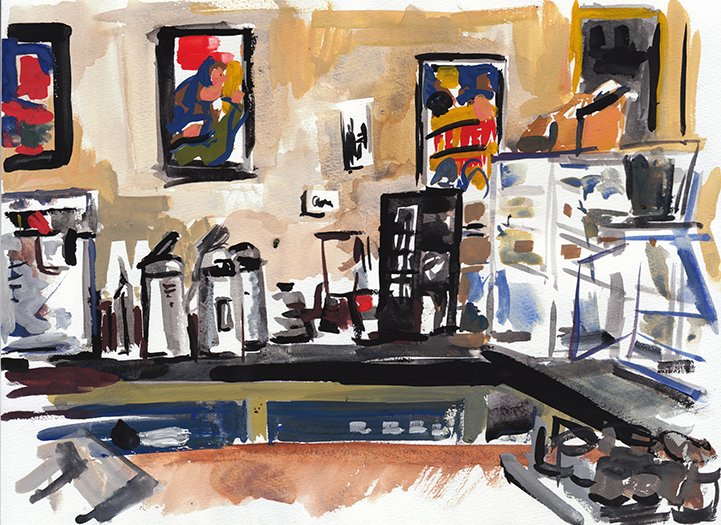 Gregg Wilson was a home coffee roaster for years. After a career in wine sales, taverns, and gourmet retail, he decided to take a chance and open his own shop in his own neighborhood of Beverly, a neighborhood on the southwestern tip of Chicago. Once known as an Irish enclave, it was recently determined to be the most integrated neighborhood in the city. Because it is far away from downtown and is separated from it by several economically depressed areas (as well as several others that are quite livable yet unjustly maligned), Beverly remains little-known to those with no ties there. Many don’t even realize it is part of Chicago. It is a place distinguished by its preponderance of single-family homes and an overall small-town feel. Students of architecture will find no shortage of interesting houses on its streets, many dating from the late 1800s. It is a place both of the city and apart from it.

It is also short on small businesses. The once-thriving retail strip on 95th Street — between Ashland and Western — is now mostly a ghost town. Peering into Shear Soul, Inc. all one is likely to see is a bored hairdresser swiveling distractedly in a barber’s chair. Just past the Metra tracks, on the north side of the street, sits TRANSFORMATION PLUS — Transforming The Mind, Body & Soul. Alas, a glance into the empty storefront below that sign reveals no evidence of transformation of any kind. A couple doors down is a sign that offers the whole block for sale. Topnotch Beefburger near Leavitt is one of the few places that sees steady traffic. Otherwise, cars whizz by en route to the shopping malls in Evergreen Park. Locals always talk up mom-and-pop places but would they actually come in? A coffee shop is nothing without its regulars. Wilson decided to find out.

After nine years of driving a cab, I was looking for a part-time job that didn’t involve driving. I talked Wilson into hiring me after a couple weeks of being a regular customer. Aside from reacquainting me with the workings of an espresso machine after a 15-year lapse, Wilson showed me how to operate the Toper coffee roaster in the back of the shop. I spent a good chunk of my time on the clock cranking out his blends, two pounds at a time. He let me put my book up for sale on the shelf next to the mugs and the old paperbacks. I redid his open hours sign to look like a cut-and-paste ransom note and started drawing on coffee bags. I drew well over a hundred in my ten months of employment. Subjects ranged from famous bygone Chicago landmarks like the Berwyn Car Spindle to White Sox players to at least a dozen different breeds of dogs. We sold these for a $5 premium to set the place apart from other shops.

His shop is in a two-story mid-century Modernist building. The other storefront tenants are an antique store run by the building owners — only open two days a week — and Johnnie’s Barbershop, which has been there forever and a day. Johnnie has been cutting back on his hours as well. When he is open, he has a steady stream of clientele. My favorite are the men with three or four strands of remaining hair on their heads. A visit to the barber is about ritual as much as it is about grooming. They’re optimists. They’ve been coming to Johnnie their entire adult lives, so why stop now?

The old couple from the antique store spend as much time in the coffee shop giving Wilson business advice as running their own. Puzzled people ask us about their hours all the time and leave shaking their heads. Yet, they have a million ideas for making the coffee shop a success. It’s easy to come up with solutions when you have nothing at stake in the outcome. Bickering with the old couple became as much a part of the work day at Hardboiled as brewing coffee.

[blocktext align=”left”]Locals always talk up mom-and-pop places but would they actually come in?[/blocktext]Next door is a Kia dealership and across the street a bunch of trees that used to be part of the Evergreen Country Club were recently bulldozed to make room for a Menards and a Meijer. The paved parking lot stretches south until it merges with the one belonging to the Walmart near 95th Street. Most cars that park on this side of Western go to Kia or to Beverly Bikes, which is just north of Hardboiled. The bike store crew were some of our first regulars. They come in to shoot the shit as much as for coffee or cookies. Commiserating about the evil new mall across the way is a constant. The little storefronts on this side of Western are dwarfed in every way by the big-boxes on the other side. It’s as if the road is a boarderline between two completely different ways of being. We hope that our end is not some hopeless relic of the past but on most days it seems the cookie-cutter corporations have left us in the dust. The bargain prices and uniformity of product appeal to most people more than anything we can offer.

Hardboiled was named after the detective novels and film noirs that Wilson loves. The walls are covered with posters for long-forgotten tough guy crime films and framed paperbacks. Old TVs, typewriters, and appliances round out the décor. Music comes exclusively from LPs culled from local thrift stores. You’ll hear Sinatra, Cugat, and Aretha Franklin here during open hours. Wilson will only put on records from his own collection afterhours. Throbbing Gristle doesn’t really jibe with the look or feel of the place. Putting the records back into their proper sleeves can be an afternoon’s work and I am the only employee here old enough to execute this task correctly. The advantage of listening to records is that divides workshifts into manageable 20 minute increments. Walking over to flip the record gives a sense of time passing in a way an endless iTunes playlist never could.

Not many people come in in the afternoons but there are a few mainstays. A fireman. A few cops. A sharp-dressing car salesman from Kia who eventually got fired for mouthing off to his manager. He was replaced by a different guy. Shifty-eyed and nervous, he seems to run on triple-espressos and conspiracy theories. We learned never to mention 9-11 around him unless we were in the mood for fifteen minutes of nonstop paranoid ranting. We spend a lot of time explaining that “Hardboiled” does not refer to eggs, or to how our coffee was made.

Having a couple restaurants and a grocery store order our beans help make up for the quiet afternoons but Wilson spends a lot of time wondering what it would take to make the neighborhood truly support his place. He donates coffee to every church-mixer, fun-run, and neighborhood fundraiser and advertises in every neighborhood newspaper and bulletin board he can. Still, most afternoons we watch the cars whizz by without slowing, while the Menards lot across Western fills. Most of the foot traffic on this side of the street is made up of lost souls, dragging themselves from the Dan Ryan Woods where they live, to the Saint Vincent DePaul Center a few doors south of the Kia dealership. Occasionally one of them pops in and looks around and asks for a cup of coffee. We usually oblige. People from the neighborhood poke their head in and wonder whether this is an antique store. They want to buy some of the fixtures like the old, nonfunctioning TVs, but rarely come back for what we do sell.

[blocktext align=”right”]Neighborhoods aren’t made in boardrooms but over kitchen tables where dreams like Wilson’s are hatched.[/blocktext]People move to Beverly once they’ve made it. They can afford not to live in an apartment anymore. Neighbors are separated by driveways and yards rather than a mere ceiling or floor. Everyone owns a car. They didn’t move here to be forced to walk. They pay good money to have everything they need behind the closed doors of their homes. They’ve worked hard their whole lives and have succeeded more than most. They’ve earned the right not to hear street noise. Leisure time is spent taking care of the lawn, maybe chatting over the fence to the guy who lives next door. The businesses they go out of their way to visit are institutions they’ve loved since childhood. Places like Rainbow Cone and Topnotch Beefburger are part of their lives.

Nobody ever says a bad word about the coffee. The people that come in offer nothing but praise. But the effort it takes to deviate from their regular routine, to skip the drive-thru Dunkin Donuts and get out of their cars seems to elude the majority of the local populace. A coffee shop of course is as much a labor of love as a practical business concern, but a year-and-a-half of no days off, on no salary will grind down even the sunniest optimist. I stopped working at Hardboiled a few months ago but Wilson doesn’t have that luxury. His shop isn’t breaking even despite being the only place to get fresh-roasted coffee beans for many miles around. A guy can only do so much. 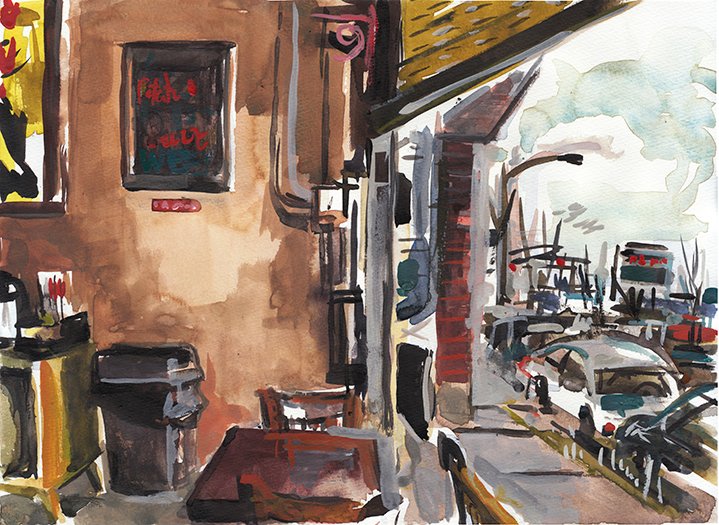 If a place like Hardboiled Coffee doesn’t make it in Beverly it’ll be a black mark against the neighborhood rather than any of Wilson’s efforts. A place like this thrives in Logan Square, in Lakeview, or in Bridgeport. Let’s hope we don’t have to wonder why it couldn’t work out here. Otherwise, this neighborhood becomes just another suburb, indistinguishable from thousands of others all over this country. If Beverly becomes a cookie-cutter kind of place there will be no reason to live here when your car can take you home to some place even further from the center of the city, where the property taxes might be a little lower or there are more Starbucks, Home Depots, and Targets. Neighborhoods aren’t made in boardrooms but over kitchen tables where dreams like Wilson’s are hatched. These dreams depend on people’s willingness to leave their cars in the driveway and to walk into a store and buy.

Sitting in the coffee shop and looking at the barren clearing of the Menards parking lot is like staring across a chasm. A faceless future where there’s no room for strange little coffee shops and interests that aren’t blared at us from every available screen. The aroma of fresh-roasted coffee beans spilling out of the roaster in back of the shop makes me turn away from the window and the dark thoughts its view inspires. I can only hope that distractions like Hardboiled Coffee can last.

Dmitry Samarov was born in Moscow, USSR, in 1970 and immigrated to the U.S. with his family in 1978. He got in trouble in 1st grade for doodling on his Lenin Red Star pin and hasn’t stopped doodling since. He graduated with a BFA in painting and printmaking from the School of the Art Institute of Chicago in 1993 and upon graduation he promptly began driving a cab — first in Boston, then after a time, in Chicago — which eventually led to the publication of his illustrated memoirs Hack: Stories from a Chicago Cab (University of Chicago Press, 2011) and Where To? A Hack Memoir (Curbside Splendor, 2014). He paints and writes in Chicago, Illinois. He no longer drives a cab.