Here on the Ground: An Introduction 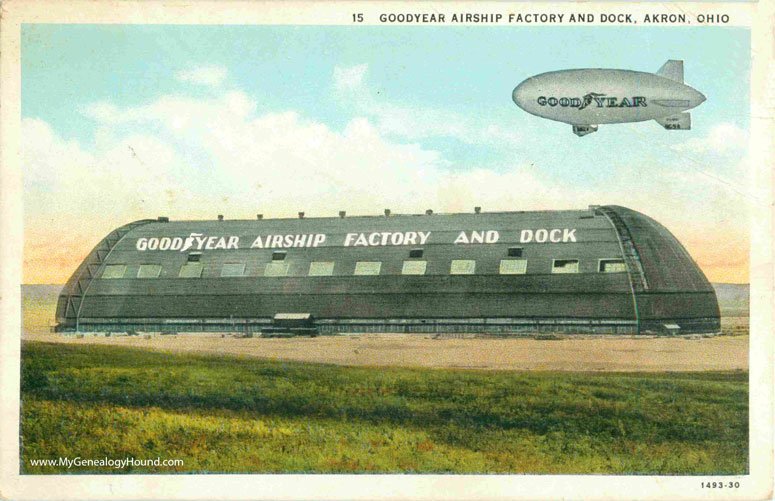 Excerpted from The Akron Anthology.

There’d better be a blimp in here. Seriously: if there is not a blimp in this book, I’m going to return it to the library I stole it from. Right now, I’m like you, Dear Reader. I haven’t read this book yet. I don’t know what’s in it. We’re both here at the beginning. I know what I want. You know what you want.

I want a blimp.

Really, it would be absurd for an anthology of writing about Akron, Ohio, not to include a blimp. It’s our St. Louis Arch, our Golden Gate Bridge.

Then again, the notion of “an anthology of writing about Akron, Ohio” itself seems pretty absurd.

Then again, so does a blimp.

But here we are, at the beginning of that very book. And I can’t help but wonder what will be in here. It’s important, this book. If you’re reading this in, say, Tampa, or Frankfurt, or Middle-earth, you may want an explanation for that statement. Akron hardly seems worthy of so many bound pages, and the idea of those pages as “important” does require some explaining.

[blocktext align=”right”]Is there anything more unbeautiful than the Goodyear blimp? Gray, looming, utilitarian—and yet its sight overhead evokes such a powerful response. Goose bumps, even.[/blocktext]But that’s OK, because one thing we’re particularly good at is explaining ourselves. We do it all the time. We’re like those Whos on Horton’s clover, calling to the world, “We are here!” We have a healthy neurosis, and a Midwestern instinct toward helpfulness. We live in a place that’s used to being anonymous, unnoticed, sometimes degraded, not often celebrated. We live in a place that The American Mercury magazine, back in 1926, described as “unbeautiful.” I’ve never been able to find a better word than that for this place I love more than any other place. “Unbeautiful” doesn’t mean “ugly.” It describes something that is decidedly not beautiful (even though it is sometimes) and doesn’t need to be (even though it does sometimes).

Is there anything more unbeautiful than the Goodyear blimp? Gray, looming, utilitarian—and yet its sight overhead evokes such a powerful response. Goose bumps, even. Its sheer size, its odd grace, its otherworldliness, its uncanny hover, its evocation of long-ago disasters—it brings the same chill that transcendent architecture brings, the spontaneous yet inscrutable appreciation for art in service of function.

Who among us fortunate enough to have been children here—here: the home not just of blimps, but of the All-American Soap Box Derby, the world’s greatest basketball player, the alleged birthplace of the hamburger, the uncontested birthplace of the Dum Dum sucker; a children’s paradise—who does not recall the automatic response to hearing that distant unmistakable drone? Bolt from the house to the outdoors, head craned upward, breath quickening, watching for it to appear above the treetops, a gray whale, gently bobbing on the windstream. Who among us as adults does not do the same, no matter how many dozens, how many hundreds of times we’ve experienced it? Who among us does not instinctively wave? And who among us does not believe that the blimp, in its own way, waves back?

Therefore we are storytellers, by instinct and necessity. We know that we are descended from the best of times—a century ago Akron was the fastest growing city in America—and the worst of times. A generation ago Akron was the first notch in the Rust Belt. And these are stories to tell. We tell them because they have substance: the tales of a great rise and a great fall and a gritty fight back toward grace. And because they are not well known beyond our own borders.

State Representative Emilia Sykes tells of seeking her somewhere-over-the-rainbow and finding it back home in Akron. Andrew Poulsen enters a guitar nerd’s Wonka World behind the nondescript exterior of EarthQuaker Devices. L.S. Quinn leads us back into the old downtown hobbit hole of Mr. Bilbo’s bar. Kyle Cochrun pulls us up to the tragic midnight rooftop of the abandoned Atlantic Foundry building. Jeff Shearl takes us into the backstage strangeness of E.J. Thomas Hall. And Jason Segedy gives voice to the Generation X experience of growing up in a postindustrial netherworld and seeing not the end of things, but new beginnings.

Archie the Snowman, the Black Keys, the Capital of West Virginia—these pieces of ourselves are arranged together here, each an offering from a single voice with something to say.

We are small here on the ground. We know this, because of the blimp. So we put our voices together.

But here on the ground, have you noticed it? That nagging silence? That thing that’s not there?

When was the last time you heard the blimp overhead? A year? Two?

It’s a little unnerving to those of us who’ve known that sound for so long, who’ve taken such pleasure and pride in it. For every other place in the world, the appearance of the Goodyear blimp means something epic—the Super Bowl, the World Series. For those of us who are neighbors to the Wingfoot Lake home base, the arrival of the blimp means it’s a random Wednesday in Akron. A homely comfort. But lately, there’s a void.

In 2014, Goodyear launched a new blimp, dubbed the “NT” (for “New Technology”), whose advances included a much quieter engine than the one that produced that telltale drone. The blimp, among many other things, has for a century been a reliable touchstone while also charting a metaphor of progress, growing from war machine to advertising balloon to living representation of Goodyear’s drive for innovation.

I came to understand this lineage when I was working as a reporter for the Akron Beacon Journal. I used to find any excuse I could to go hang out at the Wingfoot Lake hangar. It was there I discovered something like what is revealed in this anthology—the stories behind the stories. For all the mechanical sophistication and corporate importance and stately history of Goodyear’s airship program, the back end of that hangar was far more reminiscent of a mom-and-pop garage. A stained pot of bad coffee, spare parts cluttering the corners, the scent of welding sparks and machine oil, and a fellowship of old guys who call themselves “Helium Heads,” spinning yarns. Much of the expertise of this strange Akron venture was passed down by the generation that built and operated and repaired the ships during World War II and the decades following. Much of the larger understanding of what these things mean and why they matter was preserved and passed on and most likely embellished across the worn break-room table next to the mechanic’s area.

Even if I don’t hear the blimp’s arrival the way I once did, I still hear those voices—Jack LaFontaine, Joan Reisig, Ren Brown—and the joy they took in sharing the stories with me. Jack took me back into the dusty warehouse space one day and showed me a coffin packed in a wooden crate, stored there since the days when the Wingfoot Lake facility was used as a production factory for all sorts of government contracts. Joan told me the story of the out-of-service blimp gondola stored at a rear corner of the wide-open hangar—a piece of Goodyear’s fabled “ghost ship,” which took off one day with a two-man crew and later floated back to the ground, empty. Ren—who died just as this anthology was being completed—and I talked frequently about his tireless historical preservation work for the Lighter-Than-Air Society.

They, as much as anyone I’ve ever known, explain why the stories of a place are so important. We are here, they say. We are the stories we tell.

Excerpted from The Akron Anthology, available for purchase at our store.

David Giffels’s books include The Hard Way on Purpose: Essays and Dispatches From the Rust Belt (Scribner 2014). A former Akron Beacon Journal columnist, Giffels has had work published in the New York Times Magazine, Parade, the Wall Street Journal, Esquire.com, Grantland.com, Redbook, and many other outlets. He also was a writer for the MTV series Beavis and Butt-Head. He is an associate professor of English at University of Akron, where he teaches creative nonfiction in the Northeast Ohio Master of Fine Arts Program, and a contributor to Belt’s The Cleveland Anthology and the forthcoming Akron Anthology.