Holy Kohlrabi! What Happened to Gardens Under Glass? 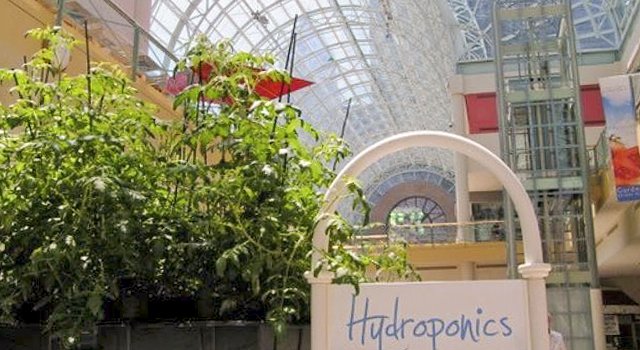 In the fall of 1987, a glass retail palace opened in downtown Cleveland. The Galleria at Erieview housed stores on two levels surrounding an inner courtyard under a vaulted glass ceiling. By 2009, however, the Galleria’s occupancy was down, with many of its shops shuttered.

In this lonely mall, Vicky Poole, the Galleria’s director of marketing and special events, saw an opportunity. Poole, who had harvested produce from her grandparents’ farm as a girl, thought the mall’s sunlit, climate-controlled environment would be a perfect place for an urban farm.

So she sought—and received—a $30,000 grant from the former Civic Innovation Lab for Gardens Under Glass, a mission to germinate and tend hydroponically grown vegetables inside the mall. In September 2010, she began growing herbs and salad greens followed by strawberries, cucumbers, and kale. The sustainable development project also included launching the ReSource Center, a showcase of hydroponic equipment, rain barrels, and information about Ohio’s rivers and recycling programs. As Gardens Under Glass flourished, it earned coverage in National Geographic, NPR, and The Huffington Post. It even helped Cleveland be named one of Travel + Leisure’s Visionary Cities in 2011.

[blocktext align=”left”]Not much larger than a walk-in closet, each seedling within the glass chapel was individually seated in its own slot under a purply halo of ultraviolet light.[/blocktext]According to Native Americans Before 1492, one of the reference books in the mall’s ReSource Center, just steps away from the new 12-by-20-foot greenhouse, indigenous people in the Great Lakes area might have found and harvested “275 species of plants for medicine, 130 species for food … 52 species for other utilitarian purposes.” They might have gathered these plants where the Galleria stands today.

More than 500 years later, this mall has housed upwards of ten kinds of cuisine, three venues for women’s clothing, a Hungarian Heritage Museum, Dollar Bank, and, starting in 2010, eight species of plants for food. 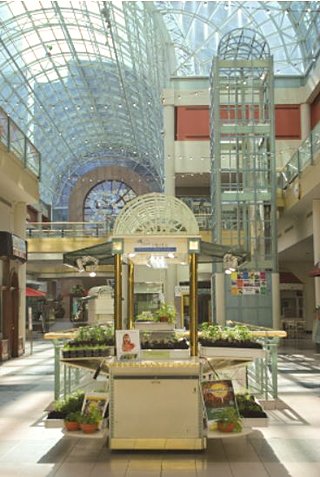 When I first read about the project in December 2011, I imagined the potential for transforming all of America’s malls into edible jungles. I fantasized about the possibilities: an aquaculture project thriving in the fountains, fruit trees replacing the kiosks, and barrels of sauerkraut ripening in the vacant stores’ cool darkness.

However, when I visited Gardens Under Glass in late April 2012, I discovered it was a much more humble project than I’d envisioned. The disused jewelry carts, which had been ingeniously converted into 12-foot rolling herb gardens, were nowhere to be found, and the wall of cucumber vines was in absentia. Even the strawberry plants were gone.

But the greenhouse still stood. People strolled by it on their way to HeARTworks to purchase a card for Secretary’s Day or book a cruise at Kaufman Travel. Not much larger than a walk-in closet, each seedling within the glass chapel was individually seated in its own slot under a purply halo of ultraviolet light.

No one seemed intrigued by the greenhouse with its 125 seedlings of lacinato kales and basils.

Instead, what stopped shoppers in their tracks were the hot chicks.

One of the vacant stores hosted a window display of live laying hens for sale as starter flocks. At two months old, though they had lost their chickie-fuzz, they still mesmerized children, businessmen, and young couples. Throughout the day, people gawked at the ten hens ensconced in their reality TV-like world under the heat lamps, preening, huddling together and pecking at pellets and lettuce. 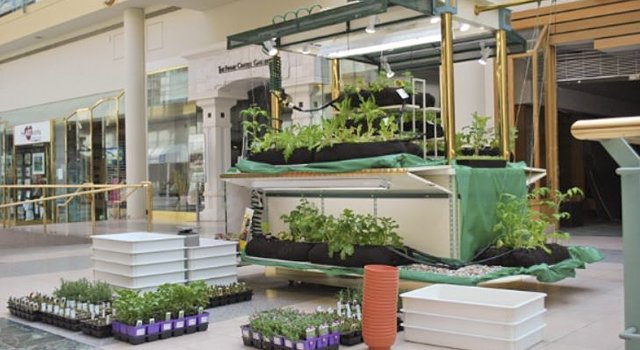 Yet by January 2013, the chickens’ heat lamps, the purply ultraviolets—all the lights, in fact—were off. Gardens Under Glass was gone. At Kaufman Travel, one of the Galleria’s longtime businesses, no one seemed to know why the greenhouse disappeared. A manager at the mall’s newest occupant, Winks Bar and Grille, said the restaurant held its staff training in the very space where the former greenhouse stood.

Of course aphids weren’t the only problem.

Growing hydroponic plants in an indoor space without total containment was also “challenging,” Poole said. The greenhouse made a great display showcase, but the public visibility and accessibility meant that as Poole addressed pest issues, her struggles were also on display. She wondered if her predicament gave the project a bad name. 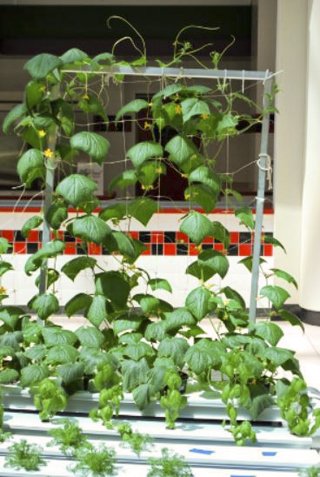 Also, despite the ideal setup of ultraviolet lights installed within the shelter and the additional natural sunlight shining through the mall’s skylights, snow collected on the outer glass ceiling in winter. The reduction in light resulted in “leggy” or weaker seedlings. And weak seedlings are a favorite food of aphids.

Furthermore, Poole felt that the hydroponic technique, which bathes the plants’ roots in a solution of nutrients and water, wasn’t the ideal setup.

“I have a new respect for farmers and planting in the soil,” she said, noting that outside wind circulates the air, rain washes, and soil provides natural nutrients. All those things help grow strong plants.

By early December 2012, Poole reached the point where she had to ask, “Alright, what are we doing?”

She’d been selling about a pound of basil a week to the Stone Oven, a bakery cafe in the Galleria, which they turned into pesto. However, the rate of return for the mall’s most local produce was negligible. When she approached Stone Oven with the Garden’s entire harvest of 13 cucumbers, they offered her 68 cents apiece.

Meanwhile, the Garden’s companion project, the ReSource Store, lacked a continuous operator, cycling through six different people during a two-year span. Despite the operator’s chance to sell products and services from the space in exchange for opening and closing the facility daily, Poole laments, “There was never a good fit—they didn’t understand the opportunity.”

And so after 26 months of aphids, a poor rate of return for cucumbers and lack of management at the store, she decided, “Enough is enough.”

The greenhouse, which utilized equipment from four companies, was dismantled in December 2012. Galleria staff helped remove the solar energy system from Dovetail Solar and Wind, as well as the tracking system from Sunflower Solutions. The hydroponics equipment was returned to BioDynamicz. The actual greenhouse went back to Arcadia GlassHouse in Painesville.

[blocktext align=”left”]“I have a new respect for farmers and planting in the soil,” she said, noting that outside wind circulates the air, rain washes, and soil provides natural nutrients.[/blocktext]Despite the demise of this imaginative project, one could argue that Gardens Under Glass did successfully draw new visitors into the Galleria (including one who came all the way from Vermont). Furthermore, over its two-year tenure, The Garden project frequently hosted events spotlighting Community Supported Agriculture and local farms, as well as companies with sustainable initiatives.

My visit to the Galleria coincided with EcoTuesday, the once-a-month social hour featuring a lecture in the Galleria’s ReSource Center, where I learned about the ecological and cost-saving benefits of retrofitting institutions with LED lights.

Poole does not know if her Gardens Under Glass project has successfully inspired any other gardens or sustainability initiatives, but she has a few words of advice: Before contemplating turning civic space into Eden, “Have a strong staff and workforce in place before the start … that was the biggest problem. I needed help and the people in place were talkers not workers.” 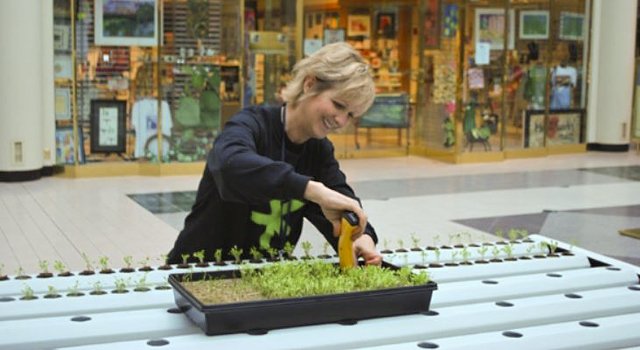 Meanwhile, as the Greenhouse folded, The Winking Lizard Restaurant Group launched Winks Bar and Grille. Winks’ Manager Van Morrison said by phone that 75 percent of the restaurant’s beers and 90 percent of its liquor is sourced from Ohio brewers and distilleries. The bar top was scavenged from the Chrysler Twinsburg stamping plant and its wooden table tops all came from houses in Cleveland that had been torn down. Much of Winks’ menu is sourced from in-state farms. And the mint in the mojitos? Patrons could be enjoying the last remnants of the mall’s homegrown produce. The Galleria’s ongoing garden of spearmint, peppermint, and chocolate mint grows on the outdoor patio during the temperate months.

What about the hot chicks? Are they gone too?

Poole laughed, “The hot chicks grew up, and now they’re old hags, like the rest of us.”

They are living at Cleveland’s Blue Pike Farm, another urban agriculture project, a garden beyond glass.

Julia Shipley is a small-scale rural farmer and independent journalist who often writes about working landscapes. In April 2012 she traveled more than 1,500 miles round trip from her home in Northern Vermont just to visit the Galleria’s Gardens Under Glass.