Homecoming Of A Clevelander In Exile

[Cleveland] is of course many cities, and an exile does not return to the one he left.
– John Updike

I’ve finally returned home to Cleveland after a ten-year absence. While away, first at college and then for a drawn-out period of military service, I kept up on Cleveland happenings, and watched the growth of a new kind of civic pride — one not vain or chest-beating but something earnest and sincere. When I left in 2005, we as a city were only cool amongst ourselves — probably for being so uncool on the national level — and civic pride more resembled a distillation of will into a raw, animal survival instinct. Were we proud of anything? Was there anything to be proud of? It’s not clear, but we were also not ashamed. Scars testify to the survival of injury, either accidental or intended, and it seems that the current novelties in Cleveland — be they new businesses and beautification of older struggling neighborhoods, or the ubiquitous local pride T-shirts (of which I own too many) — are meant to address and restore some lost nature and declare: we are proud. 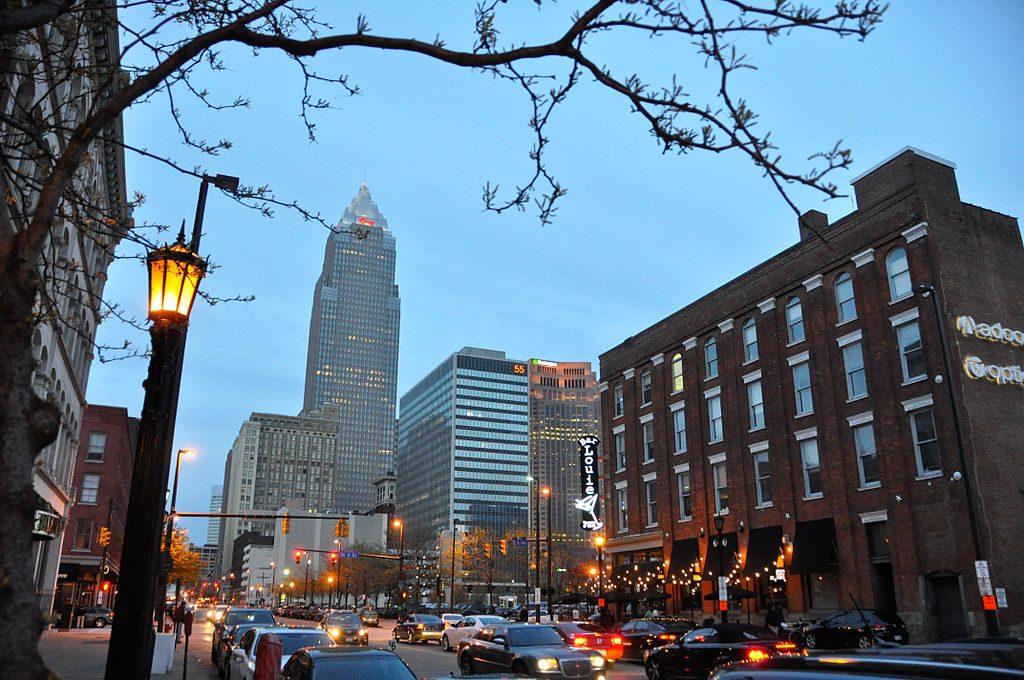 Our house on Lakewood’s eastern fringe is a beautiful early 20th-century duplex expectantly scuffed but cosmetically updated. The city, like my house, is worn. But it still stands. When I first arrived, I stepped out of the car and was greeted by the rude squish of a dead field mouse beneath my foot. I frowned at the sky, my visual field dominated by Cleveland Grey, and late lake effect gales howled through the rows of houses on the densely packed residential street. A person screamed from some near thoroughfare, drowned out only by the urgent peal of a faulty timing belt, and the air carried concurrent odors of flowering elms and faint cannabis.

There is no dissimulation here, no unseen force concealing shame. There is no interested party making proud spectacle of these moments, trying to make an uncool thing cool.

It is what it is.

Some things on the near West Side are exactly as I left them, while others have undergone stunning transformations. As someone who was (regrettably) not present for their gradual emergence, the changes seem localized, not unlike scars — just a few oases of blocks that end as abruptly as they begin, like flowers at a bomb site or a watery orb floating in the indifferent blackness of space. Back on my old streets, the new businesses and beauty strike me as the result of individual but slowly aggregating choices toward some self-actualization, the overdue but possibly last-ditch resolve to achieve our collective potential as a community. So I wonder: are our scars truly rehabilitative or silent self-deception?

[blocktext align=”right”]Cleveland is a thing you
can buy now, a thing you
can eat and drink. You can wear it on your shirt.[/blocktext]Along Detroit Avenue there are performing arts theaters, bakery-cafés, and public art where once there were convenience stores with fortified windows and anachronistic shops for shoe or television repair. Gone are the b-girls who’d dance on street corners to the concussive reggaetón of nearby boom boxes, their braids flying magically into the belches of RTA bus exhaust. Gone is the grass that used to sprout from the sidewalks’ many fault lines, which now are smooth and austere like German superhighways, no longer carpeted with Swisher Sweet butts. But these sorts of novelties speak only to certain consumers, and while the current city spirit claims an interest in the collective recognition of strengths and weaknesses, Cleveland’s main wish seems to be “cool” again.

The shift appears to be entirely toward middle-class white people about my age. If current residents — many of whom are black or brown and working-class — haven’t yet been priced out of the city’s renewal, the implication seems to be that it’s no big deal if they are. Our presentation to the nation as a new, vital city budgets in a certain obliviousness to that reality; its optimism turns a blind eye to the consequences of new development that appeals to a very narrow, white market. I’ve noticed broad use of the words “Cleveland” and “Ohio” in many of the new business titles like some evocation, as if it somehow consecrates them with superior municipal legitimacy. Cleveland is a thing you can buy now, a thing you can eat and drink. You can wear it on your shirt. Saying it aloud — Cleveland — is a holy act, liturgical and charged with marketable meaning. This is The Cleveland…X. Local. Ours. If the appeal of the city’s renovation is so limited, who, then, is the “we”, the new first-person plural to whom this all is implicitly addressed when the name Cleveland is invoked? 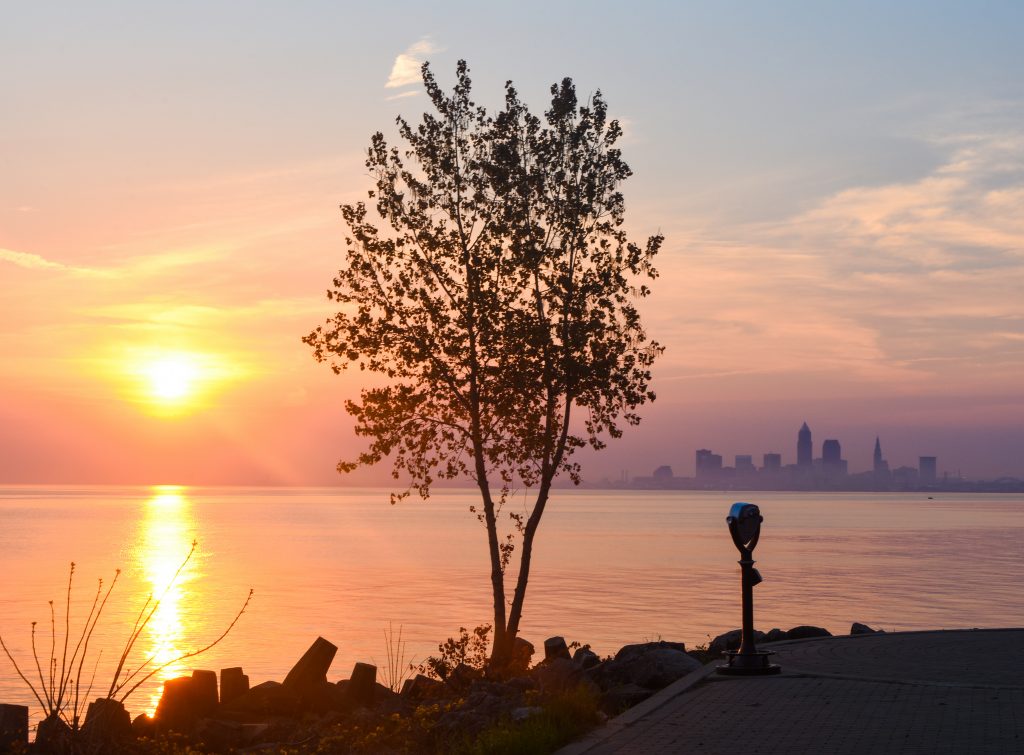 As I think of how the city will soon fill with our Union’s Republicans, I wonder: why here? Ohio makes sense as a bellwether state, but specifically Cleveland? Who are they trying to convince? And then I get it. We’re selling the myth of our rebirth, our self-made success; the GOP-ers are only the vanguard of the desired droves of our future visitors, and we are the vanguard of a re-makable America. I have friends who shrug at my concerns about this summer’s convention — not at all related to politics. “It’s good press for the city, it makes us a destination,” they offer. But my mind goes immediately to Olympic host city post-partums, the aftermath of uncollected trash and extraordinary bills — the speculation of a revisitation of Chicago, 1968, contingent on out of town police and mass arrest procedures. Cleveland is a destination but we haven’t said for whom.

Are we really building something sustainable and new or are we just painting rust? I think of the folks who’ve rented out their homes for thousands of dollars on Air BnB to make some cash during the July convention; I think of the confirmation we receive at the national-level through “Best Of…” lists put out by Fodor’s or Condé Nast (really) on which Cleveland has made recent appearances as a hot destination alongside the Piedmont region of Italy and the Arctic.

[blocktext align=”right”]Are we really building something sustainable
and new or are we
just painting rust?[/blocktext]Italy and the Arctic.

I wonder how a city can will itself into destination status. I don’t believe it’s even desirable, to become a destination — presumably, the very thing we may well have been trying to prove we are not, a venture decidedly uncool. When a place becomes a destination, the uniqueness of what it offers is destroyed by the advent of transient consumers seeking marketed versions of that place, a cheapened, user-friendly model that can’t afford to offend because it wants you to spend your money there. Are we a phoenix rising, finally, with the nation as our witness? Or are these siren songs, an illusion, just clickbait? What metadata is incorporated into their calculus? Crime, poverty, my mother-in-law’s 70-hour work week in thankless, blue-collar jobs just to get by? The chemically stained skies above what few car plants remain? The epidemic obesity rate and our simultaneous appearance on other lists whose headlines tout the nation’s “Most Miserable Cities”? I struggle to reckon this with the advent of overpriced Ohioana merchandise sold at the new-to-me Whole Foods in the nearby suburb of Rocky River, $30 trucker hats with flags and slogans printed proudly on their crowns. Of course, all things are many things, and Cleveland, as a city, is many cities at once. But the disparities between what I left and what I’ve returned to is amplified by these calls to self-promote, the end of which I don’t think justifies the means.

At this moment, the manner in which I’m greeted in businesses all over town remains earnest and sincere. My family is racially and socioeconomically complex, just as comfortable in the booths of artisanal eateries in Ohio City as at the drive-thru car wash/liquor store in Brook Park (a fantastic idea). Marketing already deals in illusions, hyperbole, and the manipulation of sentimentality. But should we be marketing ourselves in Cleveland or letting the attraction be organic? I believe we should struggle towards the latter. To be a destination, we must traffic in desirable goods, but our present chief exports may just be hope and authenticity. Change is not a force of nature: it will always be our choice. It’s crucial that, as a city, we choose an inclusive evolution, that we not lose sight of our greatest resource: our collective love for this place. The spirit in which a thing is done is as important — or maybe more so — than what that thing aims to achieve. If we aim to share our fruits with others, may it be as gifts.

___
Andrew Higgins is a student at the NYU Creative Writing Program. His writing has appeared in the Rumpus, Belt Magazine, and is forthcoming in The 2016 Race Anthology: Dispatches from a Segregated City. He lives with his family in Cleveland, Ohio. Additional Belt pieces by Andrew Higgins can be found here.

Banner photo by By downtowncle, via Wikimedia Commons