How Ohio Created the NFL—and the 2022 Super Bowl Matchup

The story of this weekend’s game runs through Canton, Cleveland, and Cincinnati


With all the attendant excess of the Super Bowl, it’s hard to believe the NFL ever had to fight to stay above water. But for roughly the first half-century of its existence, that’s exactly what happened. Particularly in the two decades immediately following the league’s founding in Canton, in 1920, it was a loose, almost semi-pro confederation. Teams sprung into existence and folded just as quickly, in small cities like Larue, Ohio; Rock Island, Illinois; and Hammond, Indiana. The NFL was also regularly challenged by rival circuits, one of which was the American Football League of the 1930s. That league’s existence was brief but particularly influential to the teams playing in the Super Bowl this week, spawning the Los Angeles Rams—whose odyssey started in Cleveland—and providing the name for the Cincinnati Bengals.

The NFL’s roots run deep in the Buckeye State. The founding of the American Professional Football Association—in a Hupmobile dealership in Canton—absorbed a lot of teams from the Ohio League, a semi-pro circuit of the state’s industrial towns. Two years later, the league formally renamed itself the National Football League in a meeting at Cleveland’s famous Hollenden Hotel. In its first decade, there were teams in Larue, Columbus, Dayton, Canton, Akron, Ironton, and Portsmouth.

For whatever reason, the sport couldn’t take hold in Ohio’s biggest city. Cleveland was variously home to the Tigers, Indians, and Bulldogs (who moved to Detroit for a season, becoming the Wolverines, before moving to New York as the Giants). When another American Football League started in the 1930s, Cleveland seemed a natural location for a team. Assembled newspapermen suggested a name short enough for headlines (local lore has it the first A was removed from ‘Cleaveland’ to fit better in the newspaper), and Buzz Wetzel, the Ohio State alumnus who would become the team’s first coach, suggested a name taken from an accomplished college football team at Fordham University: the Rams.

The Cleveland Rams debuted in the six-team American Football League in 1936. They drew decent crowds at League Park and got attention in the city’s newspapers. And they were contenders, too. They finished the season in second place, behind the Boston Shamrocks, and had scheduled to play a third game between the two teams—effectively a de facto championship game. If the Rams beat the Shamrocks, they would move into first place in the league. But suddenly the game was canceled; the Shamrocks (who, I’ll remind you, played in BOSTON) said they wanted no part of a game in frigid, potentially snowy Cleveland. Soon, another story came out: The Shamrocks had been a little lax in paying their players, many of whom refused to go to Cleveland for the game.

Rams ownership decided to take their chances with the older, more established league, and jumped for the NFL. (To stay afloat, the AFL added teams, including one in Cincinnati—more on that in a moment.) By the time the United States entered World War II, the Rams had a new owner with his own vision. Dan Reeves was the scion of a family that had grown wealthy selling its chain of New York City grocery stores to Safeway. Reeves took his windfall and was determined to buy a seat on the New York Stock Exchange and a pro football team. As luck would have it, the merchant princes who owned the Rams were tired of what was turning into a financial liability, and happily sold. Immediately, Reeves had to tamp down fears that he was moving the team to Boston.

But Cleveland’s hold on the Rams remained tenuous, particularly after the team suspended operations for a year during the war. Plans were announced for a new football league, the All-America Conference, with teams slated for Los Angeles and San Francisco. Reeves had long cast an eye toward the west coast, and now had the means to convince his fellow owners to let him go. On January 11, 1946—less than three weeks after the Rams beat Washington at Cleveland Stadium for the NFL title—the team was headed to Los Angeles.

A new team was already in the works for Cleveland in the All-America Conference, thanks to the machinations of Mickey McBride, real estate developer and owner of the Yellow Cab Co. McBride hired Paul Brown, who had led the Ohio State football team to its first championship before joining the Navy, as coach. Left behind by the Rams, the city of Cleveland took the new football team, named the Browns for their head coach, to heart. (As a Browns fan, I should say—the love sometimes feels unrequited.) The Rams, meanwhile, went to L.A., then St. Louis, then back to L.A., where this year they qualified for the Super Bowl. 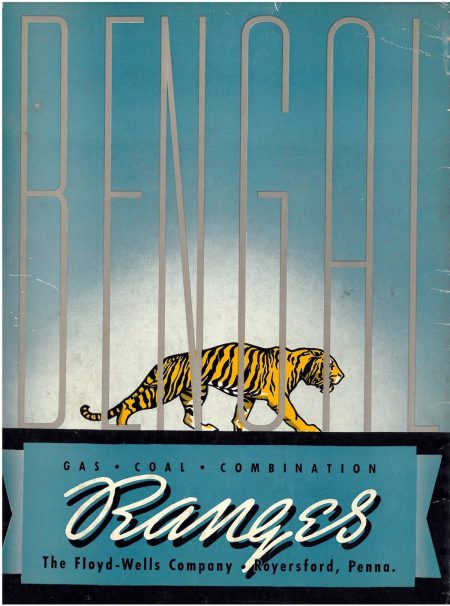 They’ll face the Cincinnati Bengals, whose story (sort of) begins in the 1930s when the American Football League had to replace the Rams—the new Cincinnati AFL team was coached by Hal Pennington, a graduate of St. Xavier High School and Xavier University in Cincinnati. At that point, he was the football coach for a semi-pro team sponsored by and named for the Model Shoe Company. Pennington solicited suggestions for the new team’s name (apparently Elephants was a popular one), but found inspiration from his mother’s kitchen, which had a Bengal range. The team would be the Bengals, and play at Crosley Field.

That iteration of the AFL folded, and the Bengals went independent. They fared better in 1938, going 7-2-1 with wins over the NFL’s Chicago Bears and the Pittsburgh Pirates (now Steelers). “They ought to get those Bengals in the league or something, oughtn’t they?” asked Eddie Brietz of the Associated Press. Instead, the Bengals joined the remnants of the Midwest Football League, which had renamed itself the American Football League. They conducted themselves reasonably well in 1939, going 6-2, but attendance was steadily declining.

In 1940, the Bengals were poached from the American Football League, along with two other teams, for a new league that also called itself—yep—the American Football League. (The former AFL couldn’t withstand the departure of franchises and folded, helpfully avoiding some confusion.) The Bengals went 1-5-2 in 1941, but that year ended with Pearl Harbor, plunging the U.S. into World War II. The league shut down—at first temporarily for the war, then permanently. Cincinnati had lost its team. A fallback plan in 1946 had the Rams moving to the Queen City in case the relocation to Los Angeles failed, but Reeves had his sights set on the west coast.

Cincinnati remained without pro football until 1967, when it became part of another American Football League—the fourth or fifth one, but who’s counting?—started earlier that decade by men who’d been shut out of NFL ownership or were stockholders in NFL teams who wanted to own their own franchise. The teams ended up in some of the usual places, like New York City (the Jets, née Titans) and Los Angeles (the Chargers), but were mostly placed in areas that didn’t have NFL teams, like Buffalo, Oakland, Houston, and Denver.

Leagues had come and gone for decades, but this AFL was the right one at the right time. Football was growing in popularity, enough to encompass everyone. Ultimately, the NFL and AFL announced a merger starting in the 1970 season, if for no other reason than to eliminate the bidding wars for players. The league would be known as the NFL, but with two conferences, the National (made up of the NFL teams) and the American (made up of the AFL teams). Three teams had to move from the NFL to the new AFC: the Browns, the Steelers, and the Colts.

Even with the moves, the AFL  needed to expand to even out the new conferences, and it looked—finally—to Cincinnati. John Wiethe, a former star athlete and coach at the University of Cincinnati who’d also briefly played for the Cincinnati Models, pitched a team called the Romans—the city is named after a Roman statesman, Cincinnatus—with ivy laurels on the helmet and, potentially, Bear Bryant as coach. But the winning ownership group was led by Paul Brown, who’d been in exile since he’d been fired as Browns coach, the first of many bad moves in Art Modell’s ownership tenure.

Brown was the first coach in Browns history, and would serve the same role for the new AFL team in Cincinnati. The name Buckeyes was suggested; Brown himself suggested Tigers. In fact, the Cincinnati Zoo was nationally known at the time for being home to white Bengal tigers. So Brown suggested Bengals, a nod not just to them, but to the city’s prior team of that name. “If we can pick up a thread of tradition we think it’s good,” Brown wrote in his autobiography. “We feel at home with the name Bengals.” ■