One Woman’s Quest to Defy the Odds of Addiction

Jenny Justice’s daughter died of a drug overdose in 2020. The Illinois mother wants to help others avoid the same fate.


In November 2020, six months into the pandemic, on a brisk night in Pekin, Illinois, Jenny Justice gathered with her family after her father’s funeral. Her daughter, Annabelle Rodgers, who was eighteen at the time, played toy trucks on the floor with Rodgers’s two-year-old son, Aaron. Later that night, Rodgers told her mother she needed to grieve her grandfather’s passing separately. Justice agreed to watch Aaron (whose name has been changed to protect his identity) for the night while Rodgers headed to a house party. Almost twenty-four hours later, Justice received a call from the Peoria County Coroner. They had found Rodgers in the house where the party had been held, dead of a drug overdose.

In December 2021, the CDC reported more than one hundred thousand overdose deaths between April 2020 and April 2021. Fentanyl caused sixty-four percent of these deaths, a forty-nine percent increase from the prior year. 2020 was the largest single year of overdoses ever recorded, up thirty percent from 2019. Rodgers’s death was one of more than 3,573 in Illinois alone, with the highest number of deaths from opioids, methamphetamines and fentanyl, all of which were found in Rodgers’s system that night in November 2020. 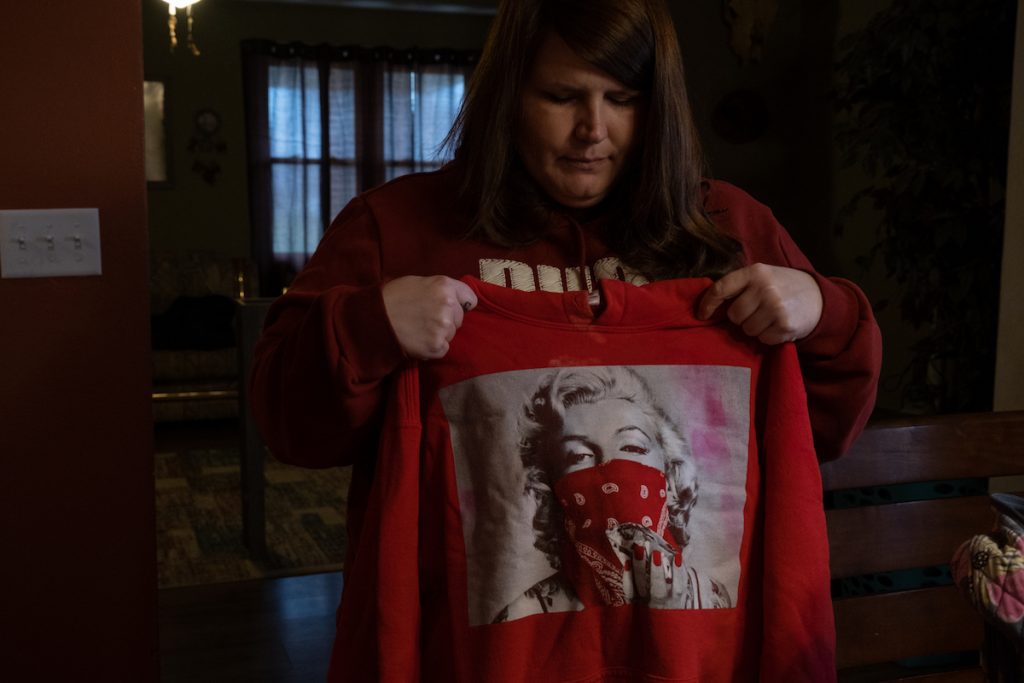 Jenny Justice holds the sweatshirt her daughter, Annabelle Rodgers, was wearing the night of her death. She keeps it in the overnight bag Rodgers packed for that night. The police returned the items to her. Photo © Aryana Noroozi 2022.

On a recent Spring afternoon, Justice took Aaron and two of her other daughters, Kendlee Lyles (sixteen), and Addalynn Lyles (thirteen) to the park. They gathered under a tree at their favorite picnic spot. It was too cold to picnic, but that didn’t stop the family from recounting memories of summer afternoons spent here with Rodgers. Justice leans on these memories and time spent with her family to stay strong for her daughters, but her grief is crushing and often debilitating, even if she doesn’t show it. “Sometimes I think she’s going to walk through the door. It’s not healthy, but it helps me get through the day,” Justice said.

More than a year after Rodgers’s death, Justice still asks herself what she could have done to prevent this tragedy, what signs she may have missed. She will never have her old life back, she said, but despite the grief, she seeks to share Rodgers’s story. “If it could help just one person, I would die a happy girl,” she said. So Justice mobilizes what she has: her odds.

Justice grew up in Pekin, Illinois. She was a junior in high school when she became pregnant with her eldest daughter, Annabelle Rodgers, in 2001. Before she was born, Justice describes her life grimly, without hope. That changed when she first held Annabelle. “She was my first love. That was when I really knew what the meaning of love was. And I was meant to be her mother. I just felt it,” Justice said.

Now thirty-eight, Justice says her daughters are her purpose and life. Her Facebook timeline celebrates each of her children. Some posts are from the present day: the back-to-school mornings, nature trips, or memes about her love for coffee, while others are re-shared memories, dating back a decade.“ I thought I was doing everything right,” Justice reflects. “‘I don’t have drugs in the home. I’m good.’ Naive, hopeful I guess. But it entered my home anyway.”

More: Snapshots of the Addiction Crisis in Illinois

Since childhood, Justice had wanted to keep addiction out of her home. Her stepfather was an alcoholic, and after her mother died of cancer, Justice moved in with her father, who also was an alcoholic. First, they lived in subsidized housing and later moved into their own home, where her stepmother, who suffered from drug addiction, particularly stimulants, joined them. Justice said she’d watch her stepmother leave the house to go to the gas station and come back months later, one hundred pounds lighter, asking for money. Her stepmother would “try to do good,” but addiction prevented her.

Justice says her family issues were not isolated; addiction is rampant in Pekin. “The outsiders call it “Tweakin’ Pekin,” she said. But she came to understand the volatility of the disease while living with her father and stepmother. On Justice’s first Christmas at her father’s home, she said, “The morning we wake up, all the presents are gone. [My stepmother] took them back for drugs,” she said. “I’m saying to myself, I’m not gonna be like my dad, I’m not gonna be like my stepmom.”

When Justice was twenty and Rodgers was two, Rodgers’s father left them. Justice believes this planted the seeds for Rodger’s lifelong struggle with mental health. She also believes Rodgers grew up too fast because of her desire to protect her younger sisters and to fill the hole left by their father. “I always told her to be a kid,” Justice said, but it wasn’t easy. 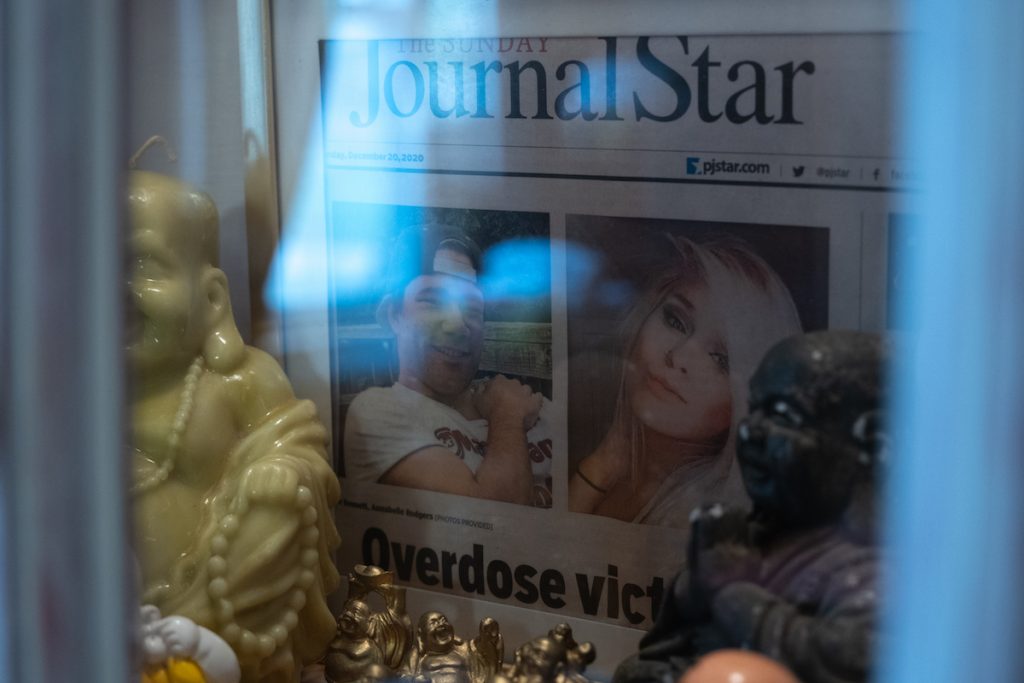 Justice keeps memorabilia of Rodgers in a china cabinet. Her story was featured on the front page of The Peoria Journal Star. Rodgers overdosed with a young man also from the community. Justice has found comfort in connecting with his family. Photo © Aryana Noroozi 2022.

Later, “as she got older, I felt like she felt that she was old enough to have a kid, make those decisions on her own. And she got pregnant with Aaron.” Rodger’s pregnancy was unplanned. She continued going to school, worked at Dunkin’ Donuts, and bought everything she needed for her child. Justice describes diapers, wipes and clothing stacked against the walls at this time. Just after Rodgers’s sixteenth birthday, in March 2019, Aaron was born.

The pandemic had been an uphill battle for both Justice and Rodgers. Prior to the pandemic, Rodgers had been working through postpartum depression and the challenges of young motherhood while working and attending online school. At seventeen, she had moved into an apartment with the father of her child. But during the isolation of the initial Illinois stay-at-home order, she turned to prescription pills, and within eight months she lost herself, Justice says. “She wanted to be out there protecting her family by working,” Justice said. “She was sitting there during COVID and can’t go anywhere. Not even with me.”

The Peoria County Coroner’s Office reported forty-three overdose deaths in 2020, including Rodgers. Justice says she isn’t sure how to make sense of the high rates of drug use in Pekin. She thinks it could be attributed to poverty and mental health issues, and the fact that selling drugs is a means of making a living in communities facing disinvestment and loss of jobs. And while many community members in Pekin suffer from addiction, Justice says local society stigmatizes addicts. She believes the stigma is a result of a lack of education around addiction.

Justice says she made the mistake of reading the comments on an article that was published shortly after Rodgers’s death. Her skin crawled at the remarks people made about the ‘nonsense’ of putting drug addiction on the frontpage of a newspaper. Justice describes Rodgers as a child who walked early, who hummed Barney at nine months old. Instead, she says, her daughter was labeled as an ‘addict’ and stigmatized as such. “That is mainly why I wanted to talk more about her, because it is not who she was,” Justice said. “For a few months of her life, she lost herself.”

Justice herself has managed to avoid drug and alcohol abuse, and she is determined to use her experience to fuel change and eliminate the stigma around addiction—both in her community, and for her grandson, Aaron. She has joined community advocacy groups on addiction, and is in the midst of earning her bachelor’s degree for a career in prison exit counseling. (She recently put school on pause to work fulltime.)

In August 2021, Justice stood on stage, nervous. She tried to prepare something to say, but says she just couldn’t. She was speaking at an event for Fight the Fight Against Addiction, an addiction awareness organization created by a local mother, Wendy McCready, who lost her son to addiction. McCready’s goal was to identify community solutions that would have helped her son, and use them to help others suffering from addiction. She hosts outreach events and created a male sober living house in Pekin.

Justice says she commends this work. In her speech she pleaded with the audience to care. She spoke about the value of Narcan, or Naloxone, a nasal spray that can reverse the effects of an opioid overdose, and urged attendees to hand out resource pamphlets to people they might know or encounter who are struggling with addiction. “It’s so easy for people to judge,” Justice told the audience. “But there’s not anybody with their hand up to help.”

Aaron watches television where a picture of Rodgers hangs in memory. Aaron was a year old when his eighteen-year-old mother, Annabelle, passed away from an overdose in November 2020. Photo © Aryana Noroozi 2021.

Justice formerly worked as the head dining director of a contract work center in a Peoria correctional facility. She says many of the incarcerated people who worked in her cafeteria struggled with addiction. Her daughter’s death helped her better understand their experience. “They use because they feel like a piece of shit and want to stop that feeling and forget it,” she said. “If you belittle them, they’re going to end up right out there again doing it.”

This month, Justice received full custody of Aaron. She is concerned, she said, because addiction runs on both sides of his family. “I feel like there’s a lot of ways things could go with Aaron,” she told me. When he turns fourteen, she plans to give him a letter his mother wrote to him in detox, because that’s the age Rodgers said she took her first pill. “I feel like she would want him to read it,” Justice said, “If I jump ahead of it and maybe give him that letter when he’s fourteen, maybe I’m saving him. Maybe I’m not.”

Rodgers always said she wanted Aaron to be a gentleman. She’d tell him she was raising him to treat girls right. Justice wants to support that goal, but more than anything, she says, she will educate him about drugs. She plans to teach him how to save a life by administering Narcan. “Maybe he can save somebody,” she said. “Because I know somebody was there that could have saved her. And I want him to be a better person than that.” ■

Click here for a photo essay documenting the family’s experiences.

Aryana Noroozi was born in San Diego, California and graduated with a master’s degree from The Columbia University Graduate School of Journalism. She began this project as a 2020 Pulitzer Center Post-Graduate Crisis Reporting Fellow, and will begin next month as a Report for America and CatchLight fellow at the Black Voice News in Riverside, California. You can learn more about her at aryananoroozi.com.