A Complicated Heritage of Coal

In southern Illinois, one community’s complex relationship with the industry on display.


On a Saturday in early May, a couple dozen people huddled under shared umbrellas at a roadside pavilion in West Frankfort, Illinois. An eighty-eight-year-old man in a black cape, a crown, and a sash that reads “Old King Coal” sat on a small stage with a handful of local politicians and Princess Flame, seventy years his junior. A state representative grabbed the mic to boast that his district still has three working mines, and that Illinois still has four thousand people working in the industry.

But this small gathering wasn’t about what remains of the coal industry. It was the annual commemoration of one of the worst mining disasters in U.S. history. In 1951, just before Christmas, 119 men died when methane caused a subterranean explosion in the nearby Orient No. 2 mine. “There were twenty-five funerals on Christmas Eve and twenty-seven on Christmas Day,” said Jack McReynolds, a retired miner and president of the local United Mine Workers of America. “People took down their decorations. Wasn’t no Christmas that year. I remember it. I was in high school.” 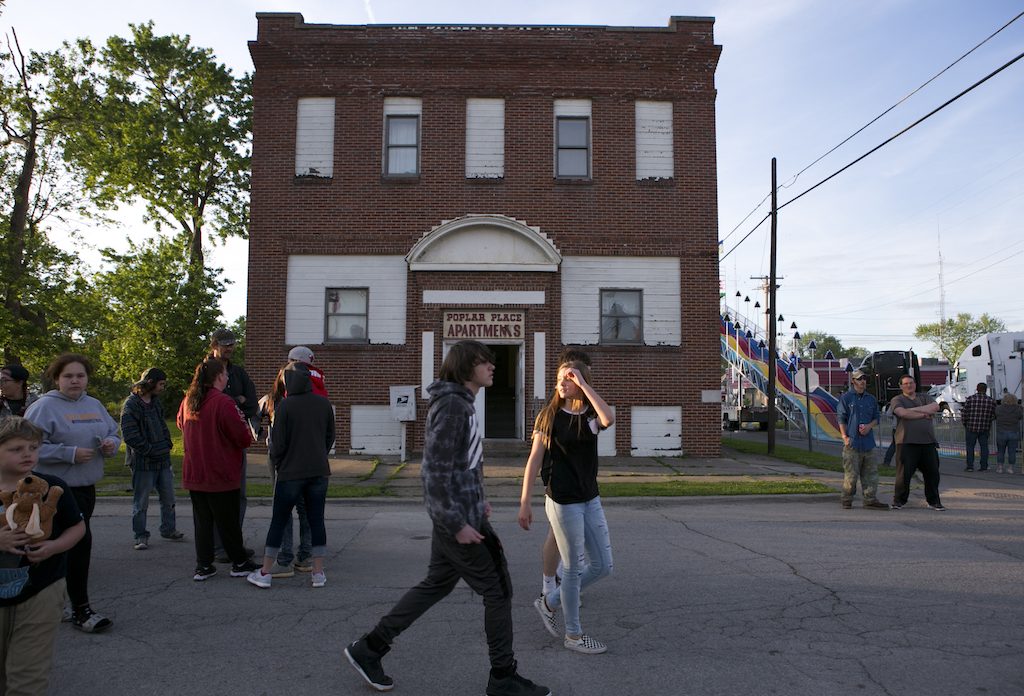 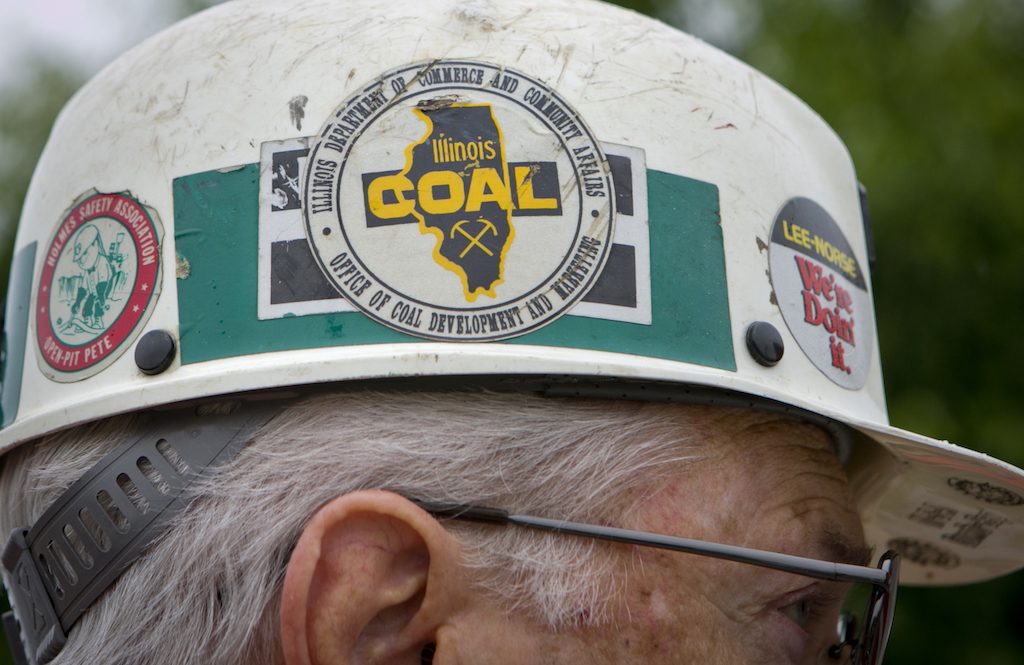 A few weeks later, McReynolds started his first mining job. He worked eight hundred feet below the earth for forty years, in seven different mines between Illinois and Kentucky. On his second day of work underground, he saved a man’s hand by putting it on ice, after it was sliced off in a cutting machine. Now, he has black lung, which is exacerbated by activity, like mowing the lawn.  “I’ve been to a lot of funerals over the years,” he said.

People in this region have a complex relationship with coal. The industry is dangerous, exploitative, and environmentally destructive, and continues to shed jobs. But for many, coal historically represented a path to independence and financial stability in communities with limited options. “It was a way to earn an honest living without a college degree,” McReynolds explained. “When I started, I made twenty-one dollars a day. When I retired I made twenty-four dollars an hour. It was a good life.” He said he’s proud of the hard work he did and the life he provided for his family. 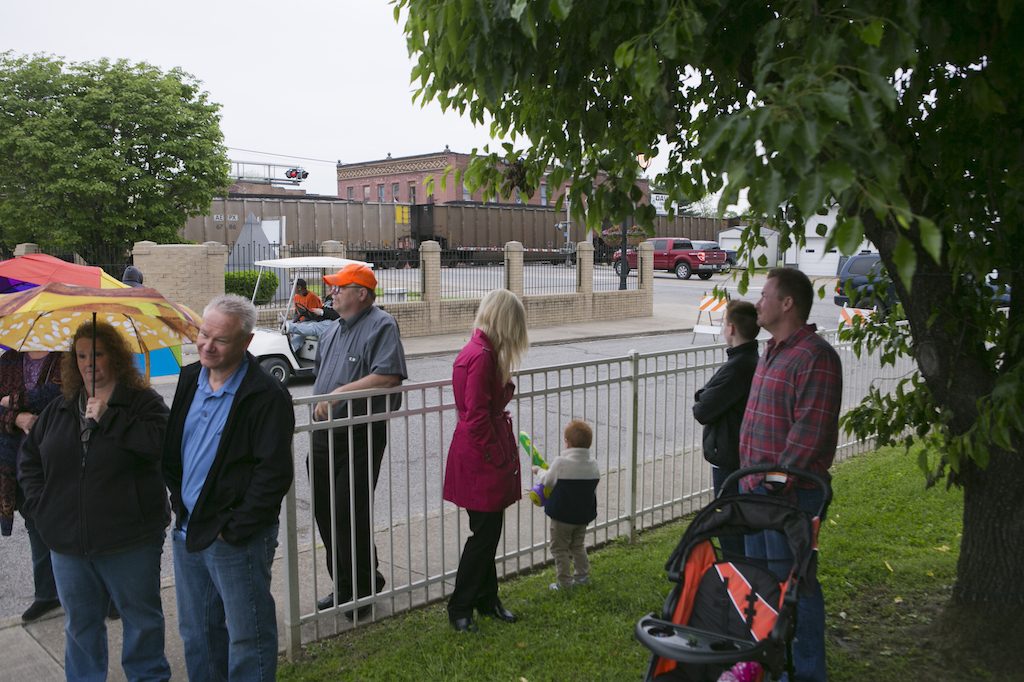 A train filled with Illinois coal passes through West Frankfort during the coal miners’ memorial service. Photo by Julia Rendleman. 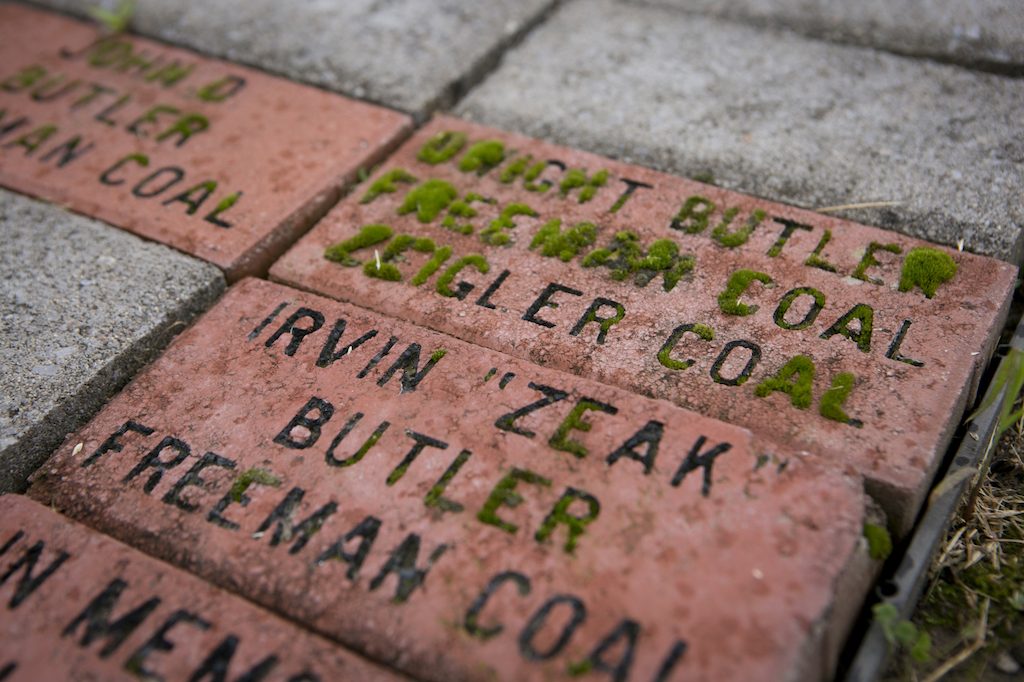 Coal extraction, and the hard, dangerous, well-paying jobs that came with it, fueled the rise of towns across southern Illinois and provided power to the great energy consumer, Chicago, more than three hundred miles away. Illinois coal no longer fuels that city (or any other) in the way it did a hundred years ago. “The way things are now…I don’t think [coal] will be coming back. If it does come back, it will be a long time from now. But coal did put this country where it is today,” retired miner Gary Schwartz said at the festival.

According to the U.S. Energy Information Administration, Illinois provides about six percent of the nation’s coal—tied, with Pennsylvania, for third-most in the country. Coal mining jobs peaked in 1923, when there were 862,536 miners in the United States. In 2016, according to the U.S. Mine Safety and Health Administration, that number dipped below a hundred thousand for the first time. 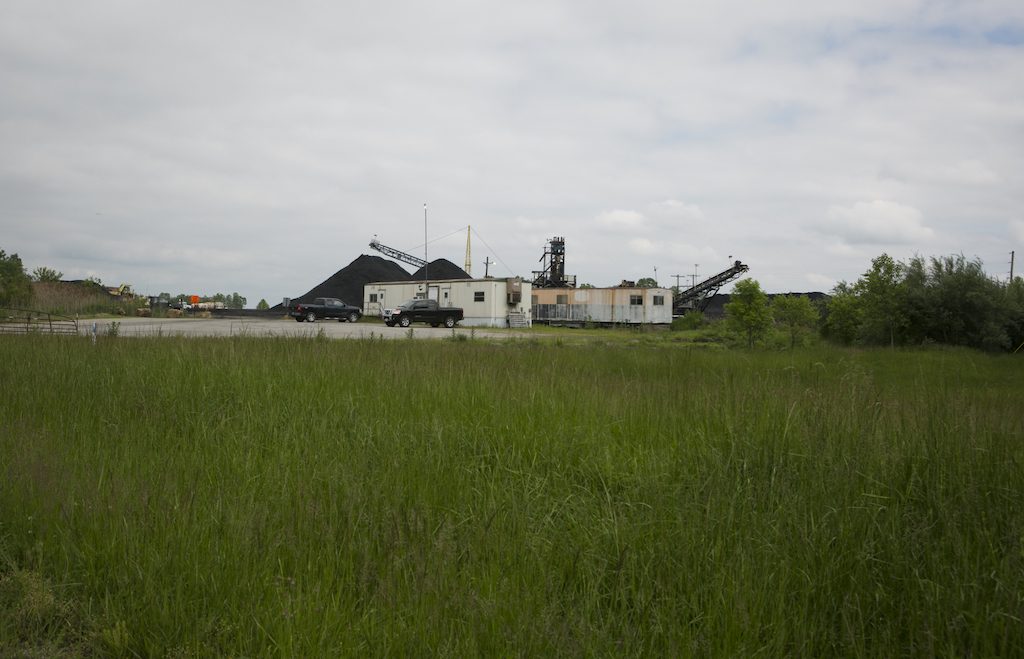 A working coal mine in southern Illinois. Photo by Julia Rendleman. 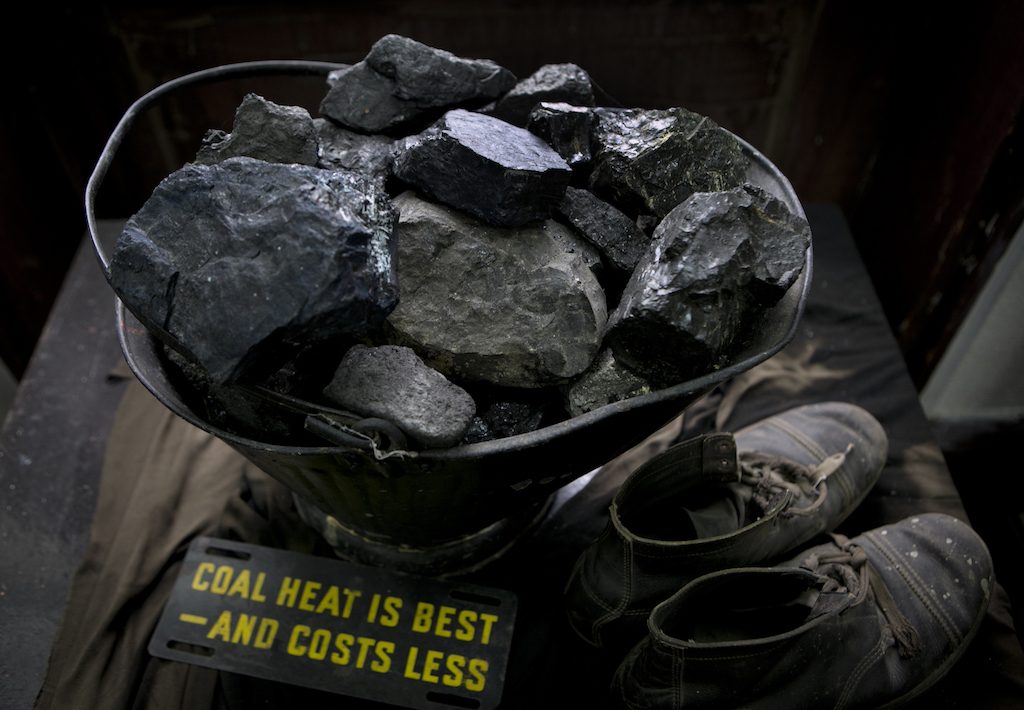 Since then, coal has been increasingly supplanted by natural gas and renewable energy for power generation. There were more than two hundred and forty thousand Americans working in solar energy in 2018, according to the Solar Foundation’s Solar Jobs Census, including nearly forty-nine hundred in Illinois. (Solar, like coal, is subsidized by the federal government.)

It seems possible that the Old King Coal Festival might one day run out of coal kings. But Sharon Ossig, director of the Coal Miners Memorial Park, isn’t worried. “My son is thirty-nine, and he’s a coal miner. What I am afraid of is running out of people to run the festival,” she said. Illinois is losing population in towns like West Frankfort—and across the board. Illinois Policy, a group working to find public policy solutions for entrenched policy problems in the state, reports that “The primary driver of Illinois’ outmigration crisis is prime working-age residents (ages 25-54) seeking opportunity.” 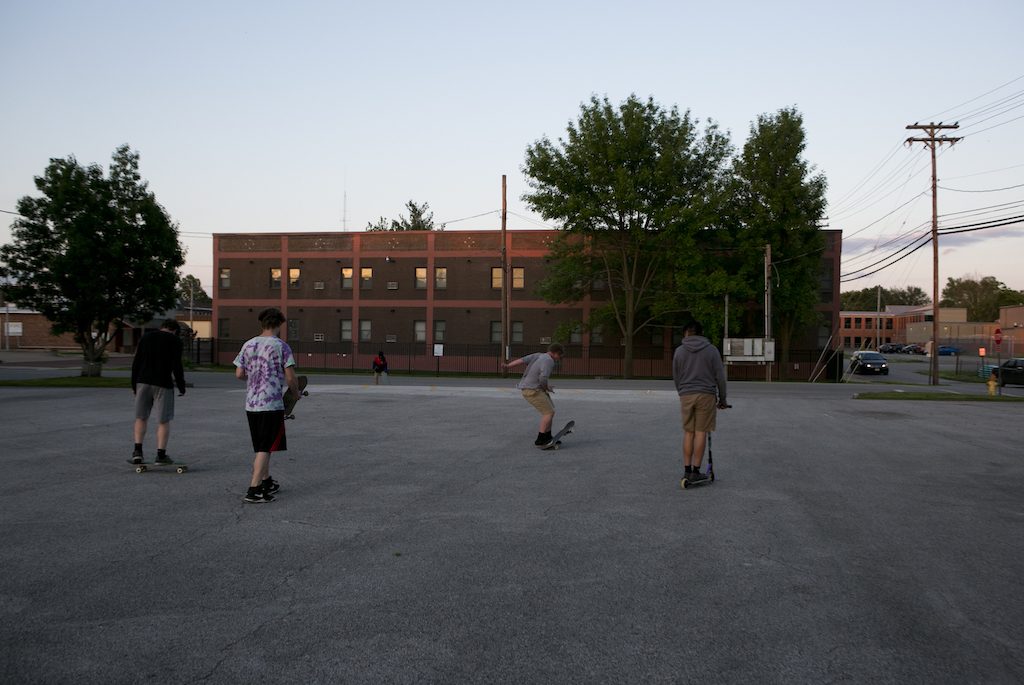 Teens skateboard in nearby Murphysboro, Illinois. Photo by Julia Rendleman.

About thirty miles southeast of West Frankfort, a plaque in downtown Murphysboro, the county seat for Jackson County, commemorates the beginning of Illinois’s long relationship with coal. It tells the story of William Boone and his “indentured servant, a man named Peter,” who dug the state’s first coal mine in 1810 into the banks of the Big Muddy River. Boone and Peter then traveled down the Big Muddy to the Mississippi ,and on to New Orleans, where they sold their haul, repeating the trip six times over the next two years. As they pushed their raft off the bank of the Big Muddy, the pair launched the state’s centuries-long journey into coal extraction.

Two hundred years later, nearing the end of that journey, the residents of West Frankfort and elsewhere are left with the question of how best to memorialize their communities’ long relationship with coal. Ossig believes this heritage is worth celebrating in festival form, even if the days are long gone when bustling southern Illinois towns “lived by the whistle.”

“Everyone needs something to be proud of,” she said. ■

Julia Rendleman was born in Carbondale, Illinois, and graduated from Southern Illinois University Carbondale, a university with an on-campus power plant that burns fifty thousand tons of coal a year.