The Indiana Dunes Birding Festival and the art of paying attention.


Indiana Dunes National Park, on the southern shores of Lake Michigan, is home to more than 350 bird species, which  live in and pass through the park during migration season.

Recently, birders from across the U.S. flocked to the newly-designated national park for the Indiana Dunes Birding Festival. Spanning four days, the festival was jam-packed with activities — from a quarter-million bird census, which is one of the Great Lakes’ largest, to bird races, bird banding workshops and several bird tours around the park.

The park is near one of the region’s most significant industrial corridors, in the Calumet region of Indiana. Just a few miles away from the park, in Burns Harbor, is a steel mill operated by ArcelorMittal. The site is “the nation’s largest source of industrial lead pollution,” according to the Chicago Tribune.

For many attendees, birding is an act of advocacy. And for some, it is also an obsession.“I’d say that birding is a little bit like a gateway drug to nature,” said Annie Aguirre, a bird guide who has been birding for four years.

While working with steel mills in Indiana, Mark Mathiowdis said he discovered the state was home to many birds, so he moved to Chesterton, Indiana to be closer to them. He started what he calls a “life list” of birds he’s seen in his lifetime—this type of list is common among birders. “Some people travel the world to see [birds], to get their life list up there,” Mathiowdis said.

Maureen Murphy started birding a year ago. Since then, she’s become involved in bird and nature conservation efforts. “Birds are kind of like wildlife ambassadors because they’re what we’re gonna see everyday whereas most wildlife is going to be invisible to us, and so … if the birds aren’t doing well, that means probably everything else isn’t going to be doing fairly well because they need habitat to survive,” Murphy said. “They need to be able to eat insects to survive, and if those things aren’t there for them, the birds are going to go away.”

And these connections in nature, and among one another, are what many birders love about the craft.“We are all connected, and birding is that connector,” Aguirre added. “Life can be really messy in a lot of different ways and I think it’s easy to kind of get stuck in your own universe and kind of forget about the way that there’s these forms of connection, and so birding, you know, it connects you to other people and it connects you to the place you’re living.” 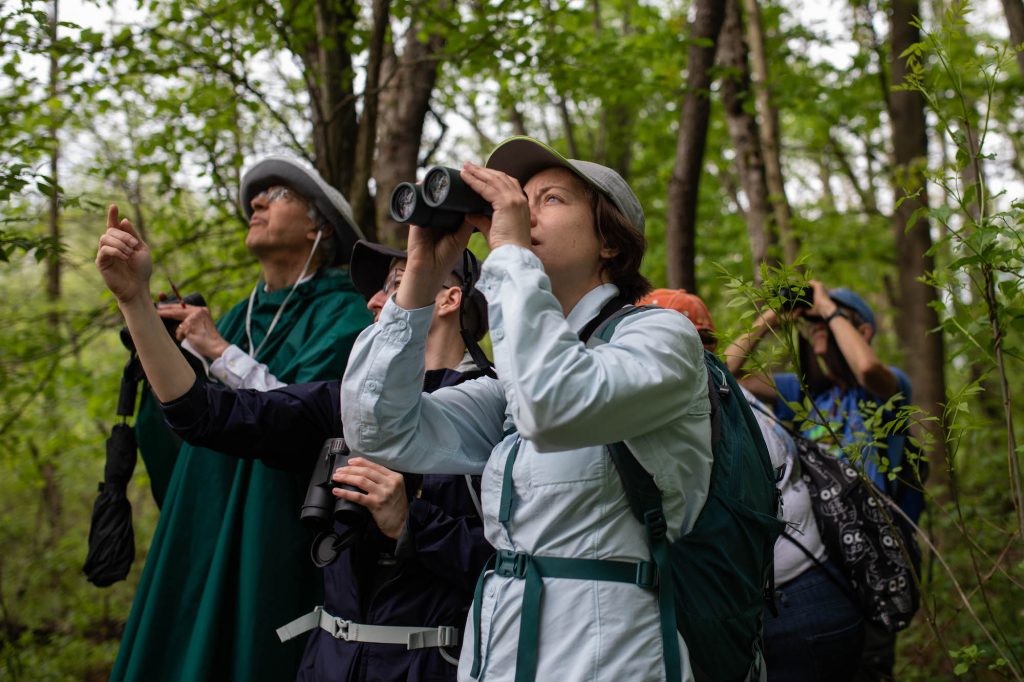 Birders stop abruptly as one of them hears the call of a rare bird at Pinhook Bog, a part of the Indiana Dunes National Park several miles away from the shore. The area is normally closed to the public, but birders at the festival were given the opportunity to explore the bog, birds, and insectivorous plants in the area. 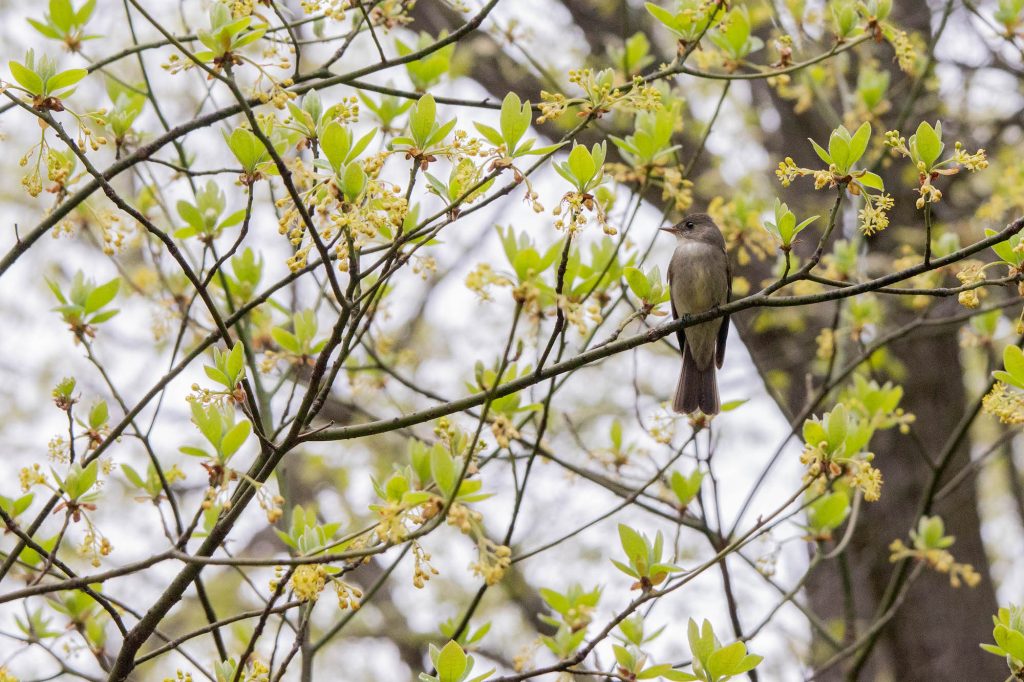 An Eastern Pewee sits on a branch at the Indiana Dunes National Park. Spring is migratory season. 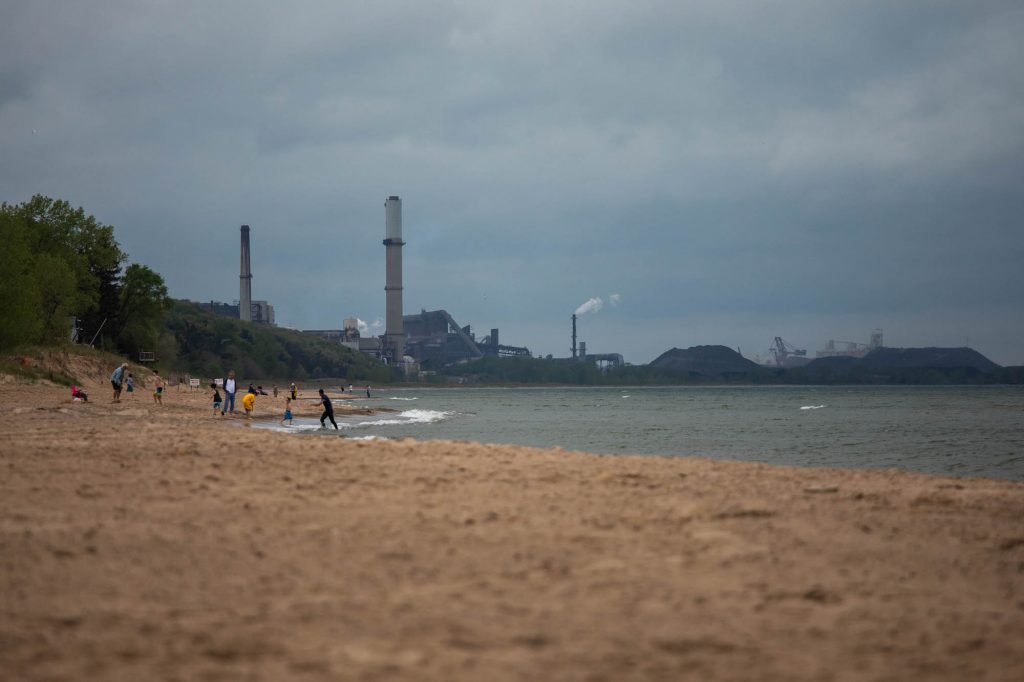 The Indiana Dunes National Park overlooks multiple steel facilities, including ArcelorMittal’s steel mill, which emits lead. “Birds are very sensitive to lead toxicity,” Renee DiPietro, Veterinary Information Specialist and Permitted Wildlife Rehabilitator, wrote. “We have seen what it can do to humans. At a blood level of just 1 ppm it is lethal to our nation’s wild birds. Most heavily affected are waterfowl and raptors (carnivorous birds).” 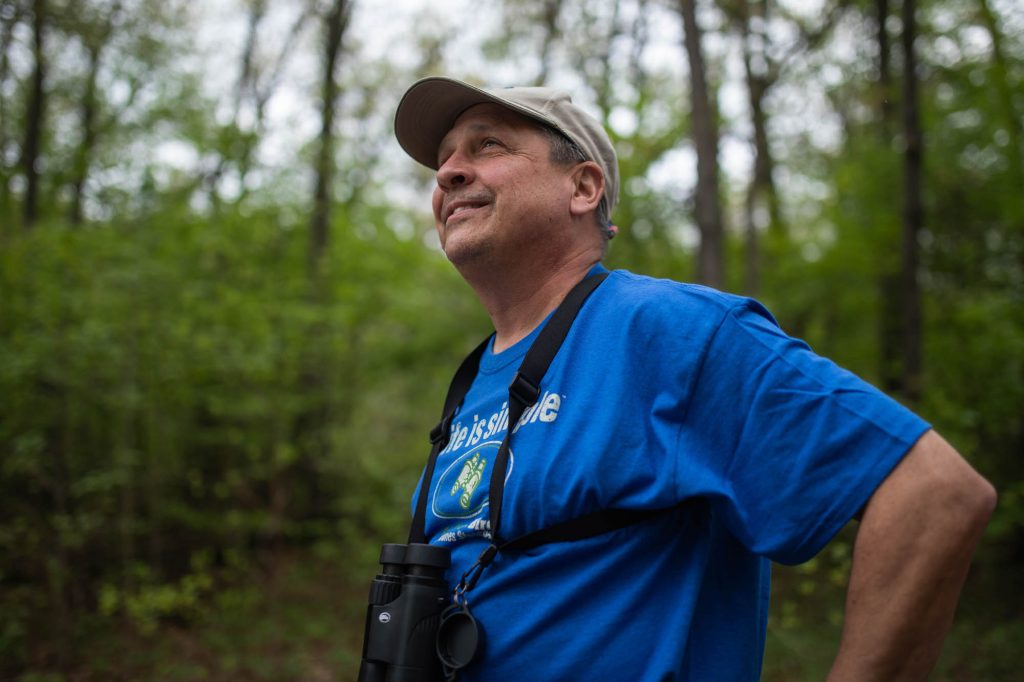 Mark Mathiowdis, fifty-eight, started birding when he was in high school. He got hooked when he discovered how many different species there were and how beautiful birds were. Mathiowdis goes bird watching in the Indiana Dunes National Park three to five times a week. 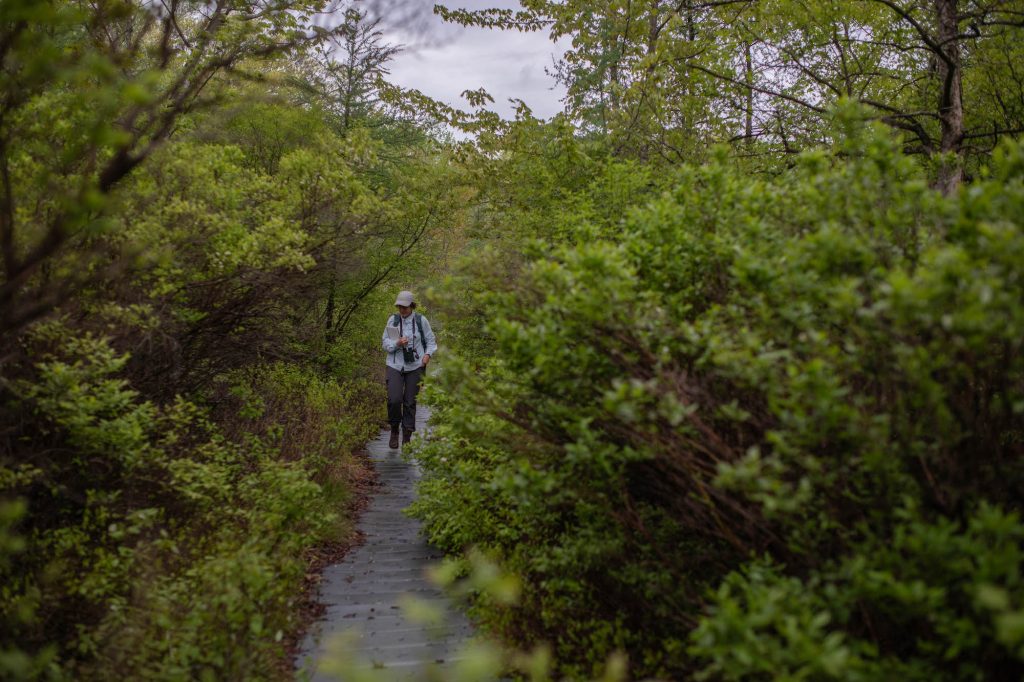 Maureen Murphy started birding while grieving a death. “I lost someone close to me, and after that happened, the only thing I felt like doing was looking at birds and being outside, so it was good to get out of human space and go into bird space,” said Murphy, who has been birding for about a year now. She said that birding introduced her to other environmental work, like habitat restoration. She now volunteers at nearby LaBagh Woods. 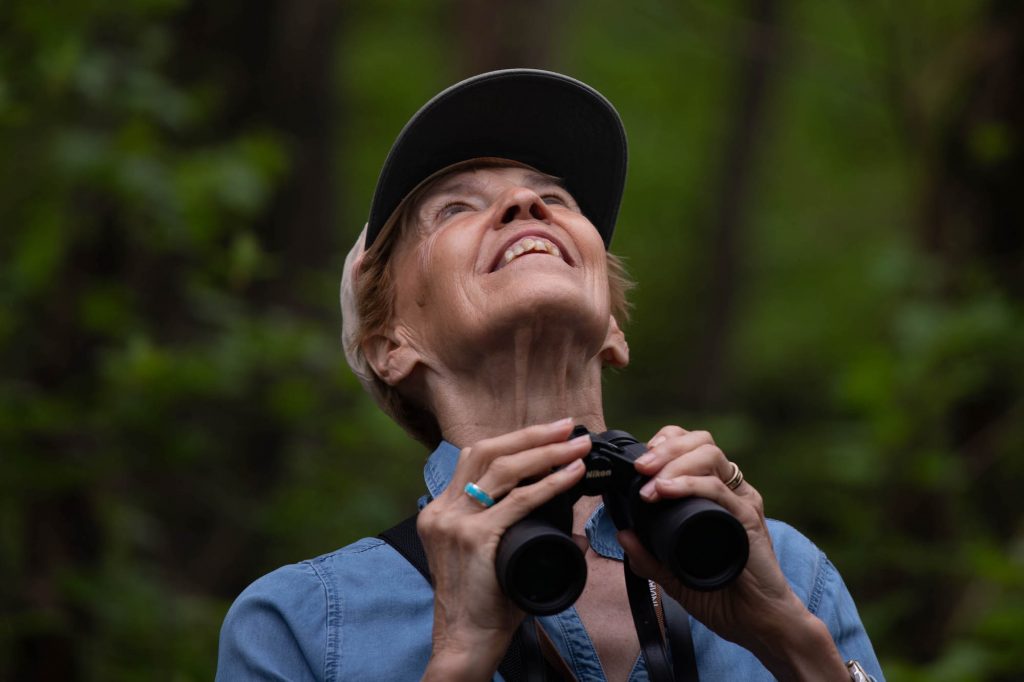 Donna Ogle looks up at a bird on a tree during a birding tour at the Indiana Dunes Birding Festival. “It’s just amazing. … Birds are all around, but I hadn’t noticed them, and then when I stop and begin to see, the world just opens up in a wonderful way,” Ogle said. 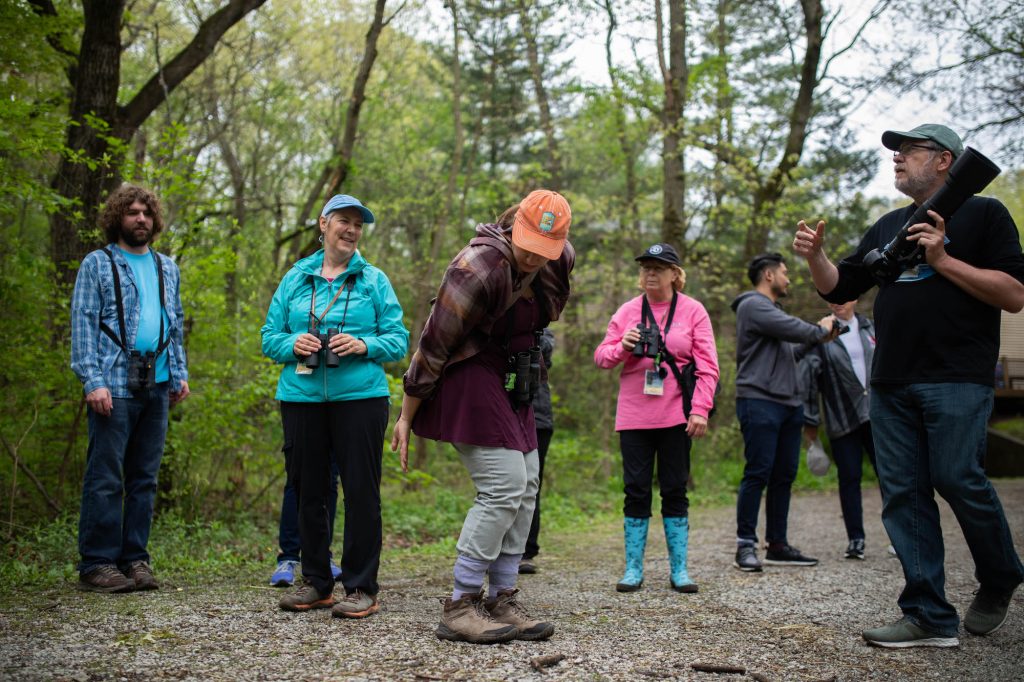 Annie Aguirre, who led a birding tour at the Indiana Dunes Birding festival, imitates a bird. 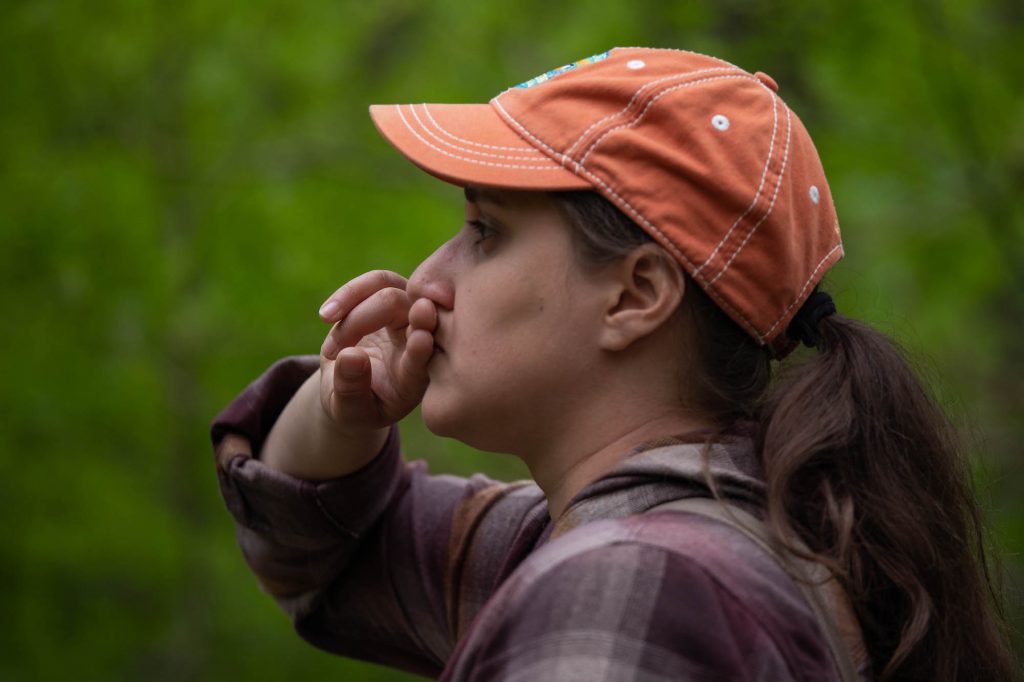 Aguirre imitates the sound of a bird as she leads a tour called “Birding by Ear” at the Indiana Dunes Birding Festival. Birds often respond to her calls. 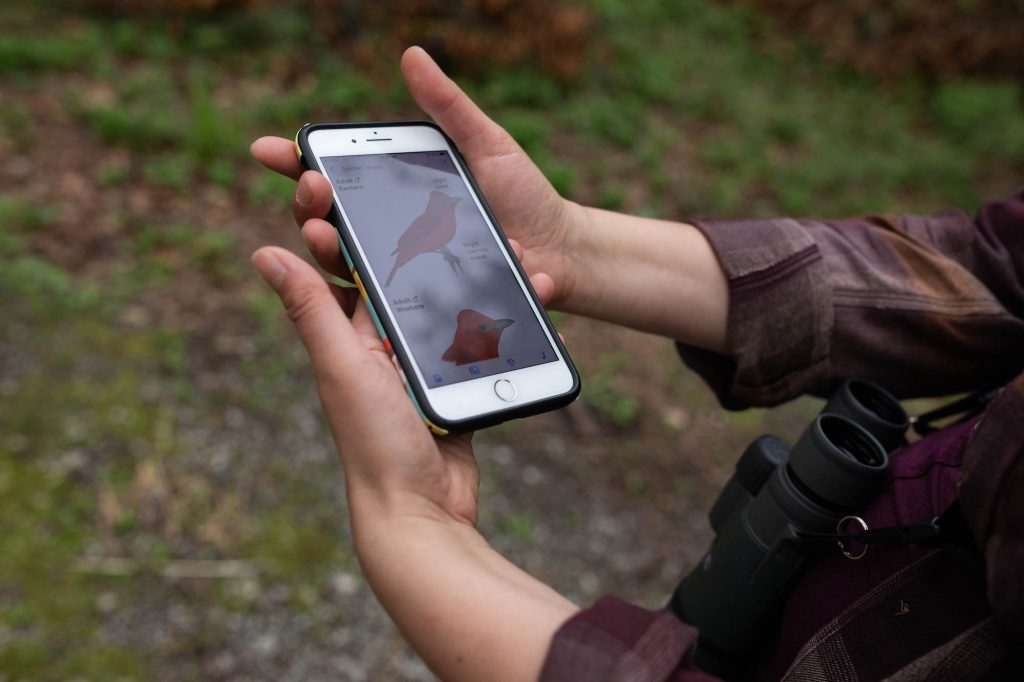 Aguirre opens a birding app, which has a catalog of pictures of different bird species and recordings of their calls. She uses the recordings to identify and attract specific birds. 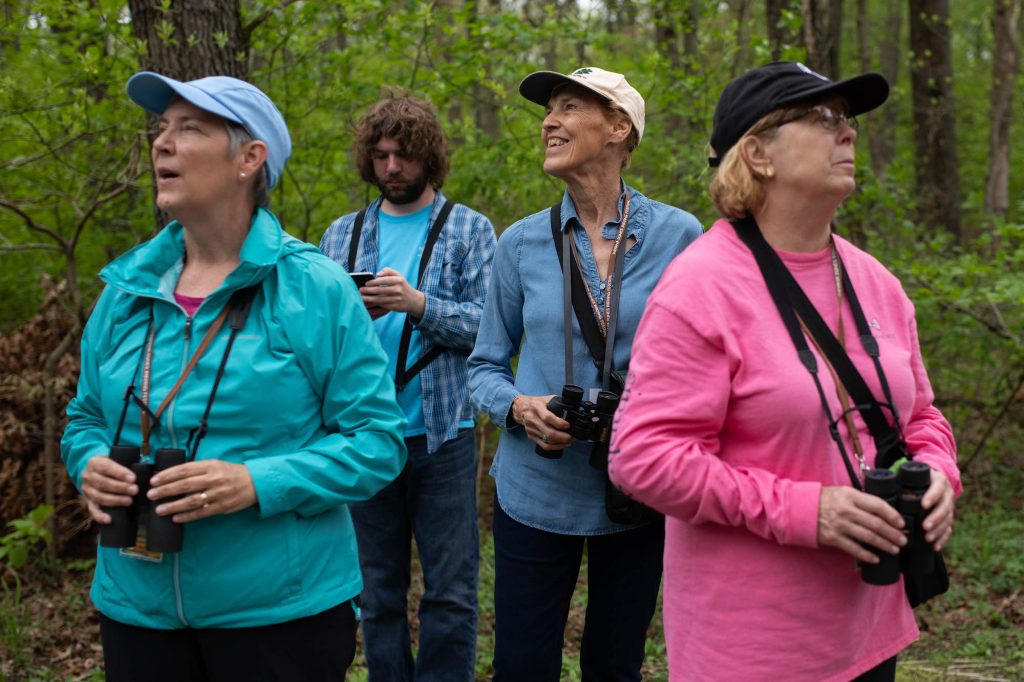 For many, birding is a social activity. Many people go out in groups and help one another spot birds in the wild. According to Annie Aguirre, Indiana has a strong birding community. 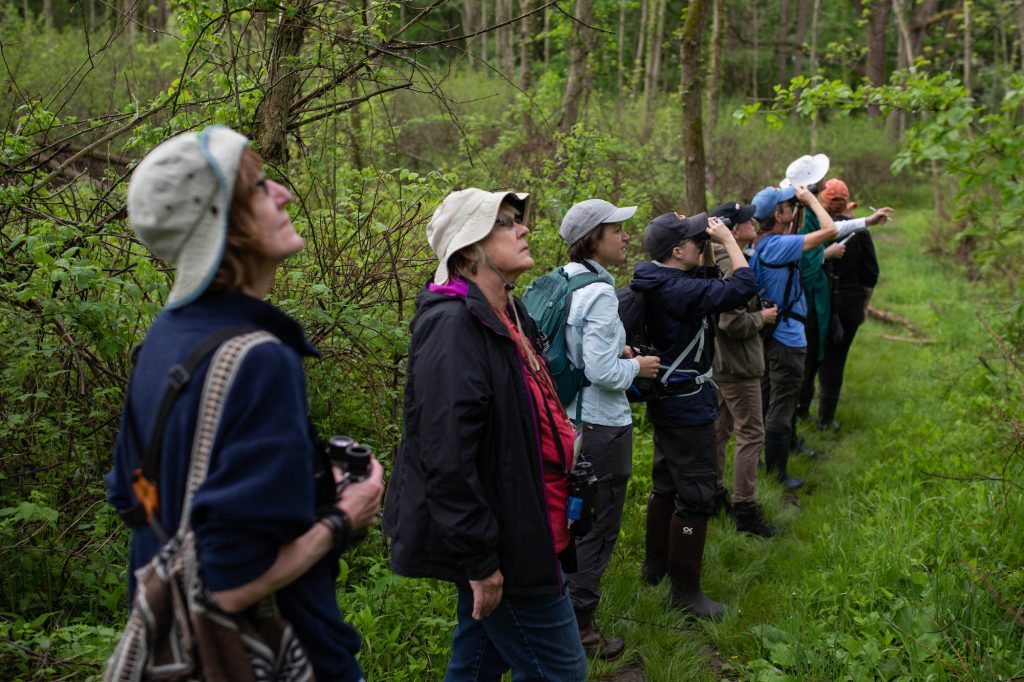 Birders walk quietly through the Pinhook Bog while on a three-hour birding tour of the area. When they hear the call of a rare bird, they immediately stop, stay quiet and help one another spot the bird, which requires a sharp eye. 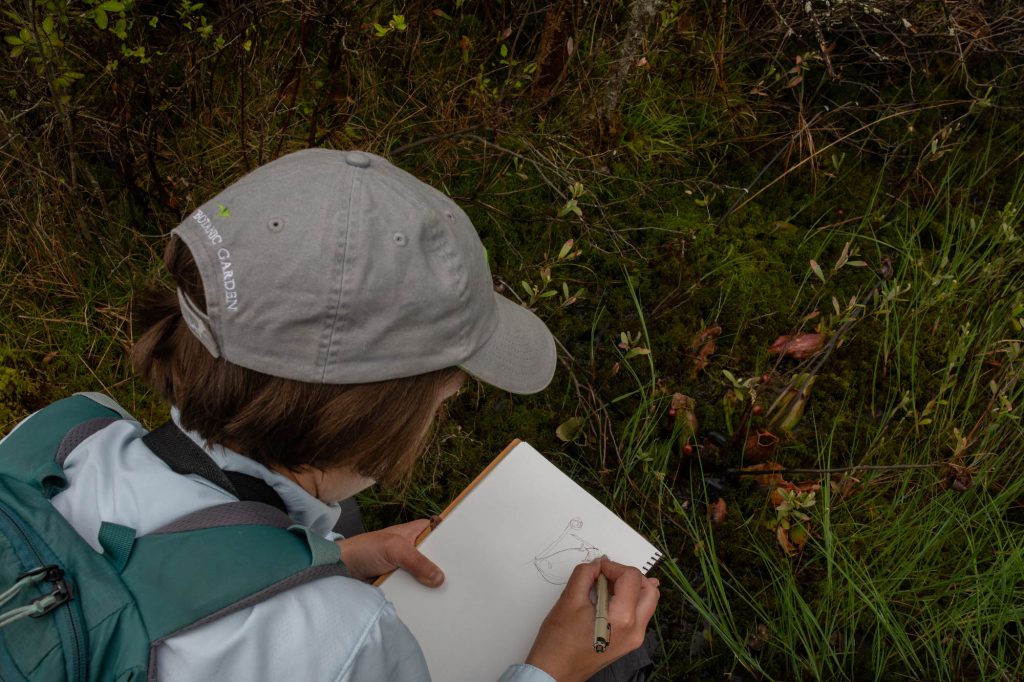 While looking for birds, Maureen Murphy takes a break and sketches a carnivorous plant she found along the way. Seeing the interconnection of their surroundings, many birders combine their love for birds with their love for other forms of nature. 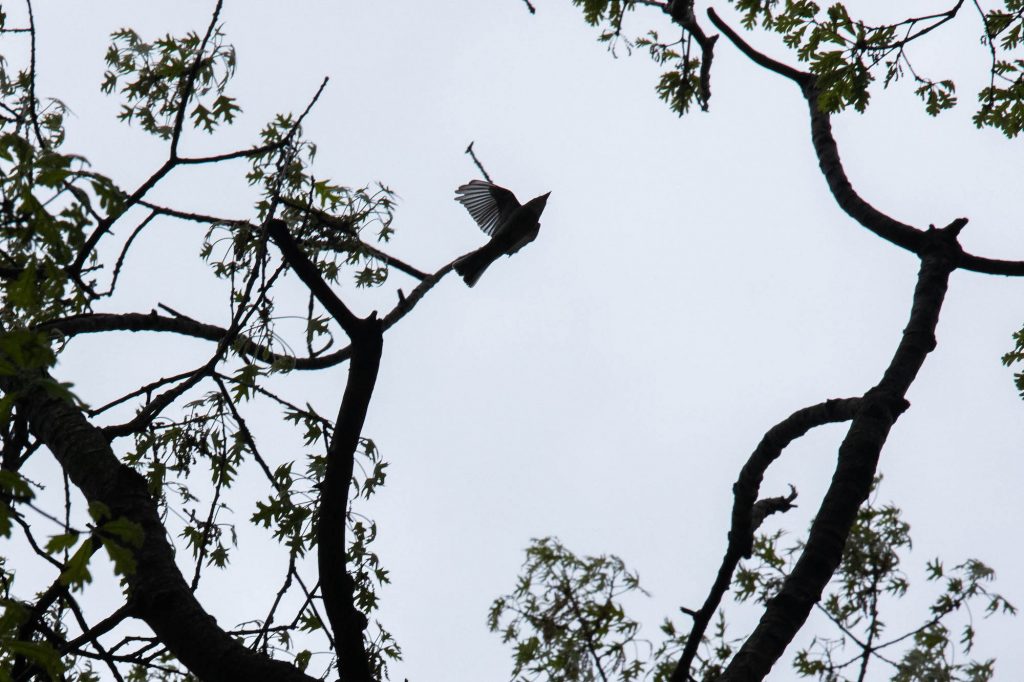 To Aguirre, birding is important because it reminds her that “[Your] habitat connects you with other people, the environment, how that’s changing, and just, you know, remembering to pay attention and really savoring, appreciating [your environment]. And, you know, that branches out into so many significant forms, whether that be through habitat loss prevention to protecting endangered species.” ■

*Correction (5/22): an earlier version of this story identified the bird in the second photo as a sparrow. It is an Eastern Pewee.

Pat Nabong is an award-winning visual journalist in Chicago. Dedicated to challenging stereotypes, she explores the intersections of culture, identity and social justice issues. Her work has appeared online at Chicago Magazine, Chicago Reader, Narratively, and Rappler, among others. She is a member of Authority Collective and was a fellow at City Bureau, the Pulitzer Center, and the International Women’s Media Foundation. Learn more at patnabong.com.