Industrial Strength: What Rowing On The Cuyahoga River Taught Me About Myself, and My City

The Cuyahoga River is better known for catching fire than for its natural beauty. When I stepped into the rowing shell for the first time, the rumors that circulated about the Crooked River worried me: the stories of fish extinctions, mysterious smells, and even dead bodies left me more than a little apprehensive about what was to come. But, as I breathed in the air crisp with the promise of fall on that sunny afternoon, I didn’t see the stomach-turning sights I had heard so much about. Instead, I found new perspectives, for my city and for myself. 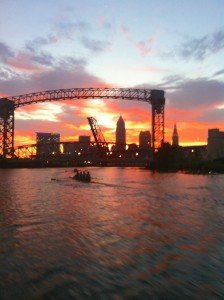 At first, I didn’t expect rowing to so fundamentally shift my outlook on life. When I was younger, I was skinny and cerebral, and I spent my time immersed in pursuits like pleasure reading and music lessons. A year into high school, I decided to join the crew team. As the golden fall days shifted to the biting cold of a Cleveland winter, and the blue sky turned to a stormy grey, I started to realize why I stuck with a sport that required daily exposure to the unpredictable elements. I grew into an athlete, someone I never thought I could be. But more than anything, I learned about the city where I now spent so much of my time.

Until that year, I lived a rather insulated existence. The center of the city of Cleveland, though very close to my home geographically, was never fully appreciated or enjoyed. I visited rarely, and I was jealous of people who lived in places without the reputation of our rust-belt metropolis. Daily crew practice on the river changed all of that.

Rowing has literally allowed me to view Cleveland from a different angle. In the Flats, instead of the ghost town many people expect, I see a vibrant area full of public parks and the buzzing activity of new construction, with colorful bridges and quirky old architecture that give visual distraction during long, hard practices. The way I experience the city changed. Not many people have been inches under a railroad bridge with a train running across it, but I have. I get to see the beauty of the hazy sunrise filtering through the old steel mills, marvel at the towering Guardians of Transportation, and gape at the immense bulk of a freighter making a hairpin turn on its way to the lake, all from a slim boat just inches above the water. The industrial background is not ugly and depressing like I thought for most of my life. Now, it is what makes me proud of Cleveland. 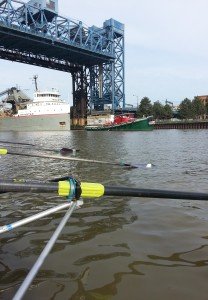 My coach liked to say that our team was different because we practiced in a place that made us tough. The Cuyahoga River is one of the curviest in the country and can be dangerous, but the way rowing on that river has transformed me is worth every near-death experience with a tugboat. Now, I can tick off each turn in the river, the names running through my head as my boat glides through the water. There’s the industrial Marathon Bend, which is shortly followed by the turn under the new span of the inner belt bridge. The straight stretch by the old Scaravelli Marina opens up into the sweeping vista of Collision Bend, that quintessential view of the Cleveland skyline. Each landmark now has a name, and radio calls no longer seem like the indecipherable code they were when I began rowing. I know the river now. I know the feeling of making that last sharp turn at Columbus Road, the place where I sigh with relief at the end of every practice, because it means the dock is near. I am one of the few who spend time each day navigating the debris washed down from a hard rain, who know just the right angle to come into the dock without scraping the hull (at least, most of the time), and who are lucky enough to feel at home in such a wonderful part of our city.

All of this has left me a different person than when I began. I’ve gained friendships, survival skills, strong legs, a killer PFD tan, and the ability to leave home without fear of the unknown. Rowing has made me recognize my own mettle, just as it forced me to see the truth of the Cuyahoga; the wonderful combination of natural beauty and industrial resilience that makes it such a distinctive place. Now, I am proud to know that I am strong enough to belong on the burning river.

Do you like what we do here at Belt? We are a locally-owned small business, and rely on the support of people like you. Consider becoming a member, so we can keep it coming.