Beyond Good and Bad: A Conversation with Connor Coyne

On September 22nd, Flint native Connor Coyne will launch a novel twenty-two years in the making. The setting of Urbantasm: The Dying City isn’t Flint, but Akawe—Flint at a magical realist slant. The streets have different names, the Zibi River courses through the city, and the empty factories of X Automotives sprawl across the blighted community. Akawe, seventh-grade protagonist John explains, is “A poor city. A beat-up city. A car-making city an hour’s drive from Detroit, but then the cars it made left, along with the money, along with the people.” While John schemes to date an eighth grader, is introduced to ICP and Nine Inch Nails, and heads to the planetarium for laser shows, the city around him is a sinister backdrop of gang rivalries, racial tension, and the spreading influence of a mysterious new drug, O-Sugar.

The idea for Urbantasm germinated when Coyne was in high school, grew through his burgeoning literary career in Chicago and New York City, and moved back with him to Flint. The novel has been drafted and revised in Coney Island booths, between temp job shifts, in the homes of relatives, and at Coyne’s dining room table—late at night after his wife, Jessica, and their two daughters have gone to bed. In the meantime, Coyne has written two other novels, as well as essays and short stories. Through the final revisions of Urbantasm, he has also been fostering a literary community in Flint. Last summer, he helped launch the Flint Literary Festival (its second annual celebration will be in October), and revived a free creative writing workshop for teenagers at the public library.

In his writing about the water crisis, in Belt and elsewhere, Coyne has articulated Flint’s grief, outrage, and optimism, from his heartrending essay “Bath Time” (anthologized in Voices of the Rust Belt) to a review of Netflix’s docuseries Flint Town. In all of his work, Coyne is thoughtful and generous, providing a nuanced view of Flint, a city alternately bleak and hopeful.

When did you realize Flint was a very particular place to be from?

I think I’ve narrowed it down to ninth grade, by which time I didn’t even live in Flint anymore—my family moved to Flushing [a suburb of Flint] when I was 12. I got involved in Flint Youth Theatre and the Renaissance Festival, both of which had a ton of Flint kids, including a lot of the friends I had left behind. And I found it, compared to Flushing, to be a much more inclusive, welcoming, dynamic environment. This was at about the same time I became aware of GM downsizing and national press about the crime rate. My best friend lived on the Eastside, where he was targeted by the Cobras. Flint became a stew of bad things and good things that I couldn’t ignore.

When did you start writing, and how did Flint influence your writing?

I started writing when I was eight or nine, when my parents got an IBM 286 with the Word Star word processor. I was a big fan of J.R.R. Tolkien and the Dragonlance Saga, and I wanted to write high fantasy novels. It wasn’t until ninth grade when I wrote a few plays and worked with the staff at Flint Youth Theater to revise them and enter contests. Urbantasm was the first time I really got serious about writing a novel. I was in over my head from day one.

By the end of high school, most of my sense of identity as a writer came directly from Flint. Writing for those whose voices weren’t heard and on behalf of people I cared about made me passionate about the work. I regret to say that I didn’t have a strong sense of other writers from Flint until I was in college, when I discovered Ben Hamper’s Rivethead. I really loved nineteenth-century romantic and gothic writers like Bram Stoker, Mary Shelley and, later on, Ann Radcliffe. I especially admired Victor Hugo’s way of wrestling with questions of theology, social justice, and romantic love in a big beautiful mess. Sometimes the feeling there was so potent that it became overwhelming. At its best, reading him felt physically exhilarating.

You mentioned Urbantasm was the first time you started work on a novel, but this isn’t your first book. When did you start Urbantasm? How has it changed through the drafts?

In 1995, I started drafting a play called Agamemnon’s Numbers, which was meant to be a quest through urban decay, but it was a mess. But 1996 was the year that blew the doors open on what life could be. I was finally getting the confidence to write plays, I was in a relationship and was visiting colleges all over. Meanwhile, one of my best friends was in an abusive home, another friend was living in poverty, and a third friend was terrified that his family would find out he was gay. That year I read Les Miserables, and I wanted to write a story in that mold—not an updated version of the same plot, but a romantic treatment of Flint. Every creative depiction of Flint I saw was predicated on gritty realism, but I wanted to infuse Flint with this sort of dreamlike magic I felt. The play I had written felt like the best template for this, so I started rebuilding it from the ground up. 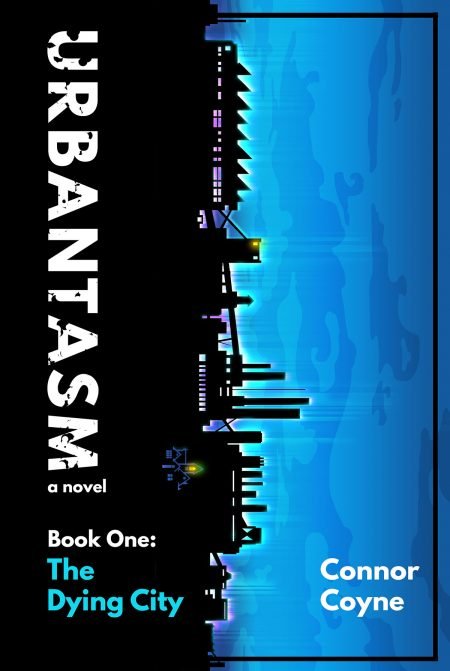 Were you as adventurous as John and his friends when you were a seventh grader?

John is a lot more precocious than I was, and the things he does at 13 are analogous to a lot of the things I was doing at 16 and 17. When I was 13 I tried to woo girls obnoxiously and unsuccessfully, played a lot of Nintendo, read fantasy, and ran D&D campaigns.

It was later, in 1995 and 1996, that things started to get exciting. One night, after a thunderstorm, my best friend and I snuck out of his mom’s house at four in the morning to wander around the city, and that was right when the book really started to crystallize. He lived on Flushing Road, just out past city limits, and we’d walk in to Chevrolet, follow it across the river, and go out along Miller or Corunna or Beecher. There were a lot of 24-hour places back then and people were out on the street, so it never felt that unsafe. I remember buying a Super Big Gulp of Coke from the 7-11 and then climbing up an antenna onto the storage shed behind Zimmerman school and sitting and talking for hours. It felt very liberating.

There’s pressure as a Flintstone (to borrow a phrase from our Detroit brethren) to say nice things about Flint. Urbantasm explores so much darkness—how did you approach those themes?

Why not set the book in Flint? What freedom did creating Akawe give you?

As the project evolved, I wanted Akawe to evoke a kind of heightened Flint, the same in its essentials, but with a sense that impossible things could happen there. (Marquez achieves this in 100 Years of Solitude with his Macondo.) The truth is it’s been incredibly liberating. As writing the novel took year after year and history kept happening in Flint—the strike of 1998, then the serial killer and arsons of the 2000s, followed by emergency management, the water crisis, and the slow-motion collapse of the community school system—I wanted to incorporate all of that into Urbantasm. “The Dying City” is pretty accurate to 1993, but in the subsequent books the fictitious setting has given me a way to collapse 30 years of Flint’s history into three years for Akawe, and that is obviously something I could not have done had I set it in the historical Flint of 1993.

What role do you see music playing in this book?

I can’t separate music from writing. To sound heretical, I usually feel like music is more important to my writing than other books are. You learn plot and dialogue and character development and whatnot from literature, but music is a sort of primal way to plug into a set of emotions and experiences that are otherwise lost to time. Music is a character in the way that Akawe is a character. John’s mom’s Patti Smith album helps him figure out how to reconcile with Quanla, Michael feeds his independence through Nine Inch Nails, and the school DJ channels through music the chaos of the dance in the last chapters. Hopefully, music isn’t a passive agent used to help set the mood or scene, but an active force that drives the story forward.

I’d like to see a multivalent but interconnected literary community. Right now, there is a tremendous diversity to the kinds of writing in Flint. You’ve got the multimedia work of the ghouls from the Flint Horror Con, a lot of activists that started writing after the water crisis broke, talented people at the Creative Alliance, and of course the brilliant kids at the library workshops. It’s as much variety of form and content as I ever found in Chicago or New York.

That said, I think Flint writers tend to work in isolation or with these contained little cells of people that have very little contact with one another. That is why the literary festival was such an important event to organize: people need to know each other, to help each other, to dare to approach their craft with scrutiny and rigor but without compromising the incredible diversity out there.

As you embark on your book tour, what are some of the misconceptions or questions you’re bracing yourself for? What do you want someone leaving your reading in, say, NYC, to think about Flint?

I don’t want to say nice things or bad things about Flint. I want to share the complexity of Flint, which transcends good and bad. I lived in Chicago for twelve years, and of course right now it’s getting national coverage for its homicide rate. No Chicagoan is going to have difficulty reconciling its grave challenges with its prodigious cultural energy. And Chicagoans will further understand that their cultural riches are often subsidized and mobilized in ethically questionable ways, that that city turns its back on its most vulnerable residents, and that its authentic culture can be—and is—commodified and exported for the profit of a few. Nobody begrudges Chicago its complexity. Nobody begrudges New York its complexity. In national coverage, even Detroit (tenuously) gets the benefit of the doubt on this front.

But cities like Flint, or Youngstown, or Muskegon, or East St. Louis aren’t allowed the courtesy of their complexity. They’re always someone’s trash heap or diamond in the rough. Flint has had a history of invention and exploitation, resilience and codependence, inclusion and naked racism. I would want to show that hypothetical New Yorker that Flint isn’t a place that anyone can really understand from a single thinkpiece read from six hundred miles away. I would want them to show Flint the courtesy of allowing it to be every bit as paradoxical and inscrutable as mighty New York.

Kelsey Ronan grew up in Flint, Michigan and lives in Detroit. Her stories and essays have appeared in many magazines, literary journals, and anthologies, including Michigan Quarterly Review, Utne Reader, Kenyon Review, Indiana Review, New Stories from the Midwest, and others. Find her online at kelseyronan.com.