Life After the Derecho

In eastern Iowa, we’re a long way from recovery


Where to start but with the wind?

On August 10, we here in Iowa learned a new form of the word: wind as verb, wind as force. Uprooting trees. Deflating grain silos. Ripping apart roofs. Demolishing crops. Twisting power lines. Flipping semis. With no warning, either—no tornado sirens, weather alerts. Some people got text messages from friends west of us who had seen its power, but nothing could have prepared us for this.

And what, exactly, to call this? At first, officials and meteorologists used familiar terms: severe thunderstorm, straight-line winds, flash flooding. But later, when roads were again driveable and the damage could be surveyed, it became clear we were looking at something else entirely: a fierce, shaping process that removed “before” and left only a tenuous “after.”

The storm arrived on Monday. After days of relative silence, it finally got substantial national coverage over the weekend. Almost all of the national stories detailed the damage to crops, farm operations, and the power supply. At first, this seemed reasonable: experts estimate nearly half of Iowa’s thirty million acres of cropland sustained damage, and so far Alliant Energy, which services almost all of Eastern Iowa, has had to replace more than twelve hundred miles of wire and more than three thousand downed electric poles. 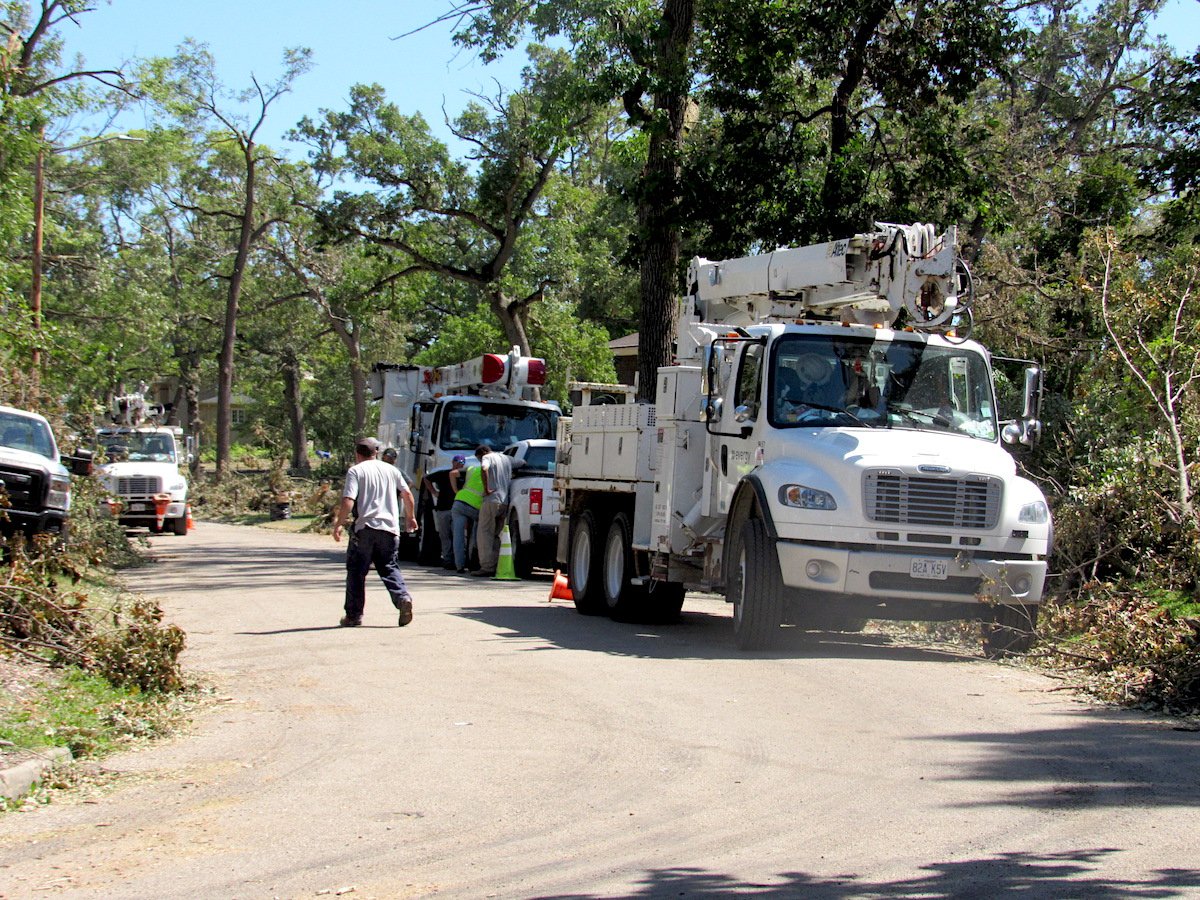 Locally, reporters at Iowa Public Radio and The Gazette worked tirelessly to amplify the extent of the storm’s damage, many working without cell phone service, WiFi, or electricity. (The Gazette still didn’t miss a single edition.)

The word “derecho” began circulating late in that first week. It’s a term that originated here more than a century ago, when University of Iowa professor Gustavus Hinrichs used it to describe a “straight blow of the prairies.” Still, it was another unfamiliar and unprecedented word in an unfamiliar and unprecedented year. The question has to be asked: if this had been called a tornado, or even an inland hurricane, would it have taken a week to see a picture of it in our news feeds? These days, even vocabulary seems to betray us.

Here in eastern Iowa, we knew we had gotten the worst of it. I live in a small town thirty miles outside of Cedar Rapids. “Just one more thing” I remember saying to my neighbor in the aftermath after we emerged from our houses. I fairly screamed it over what became a relentless din of chainsaws and generators. We took care of our own houses first, then our streets, then our neighborhoods. Our always-empty side street was flush with pickup trucks and trailers brimming with tree limbs and debris, utility trucks working block by block. The air grew quiet as power eventually returned.

Cedar Rapids, the second-most populous city in the state, was ravaged. Iowa’s governor, Kim Reynolds, showed up on Friday, five days after the storm. When asked about the delay, she said, “We’re here now.” She brought more than a hundred members of the Iowa National Guard with her. Adjutant General Benjamin Corell, the Guard’s commander, said, “The last time I saw this was in 2005, in the aftermath of Hurricane Katrina.”

My partner went to Cedar Rapids that Sunday to deliver food and supplies. She called it “unrecognizable.” 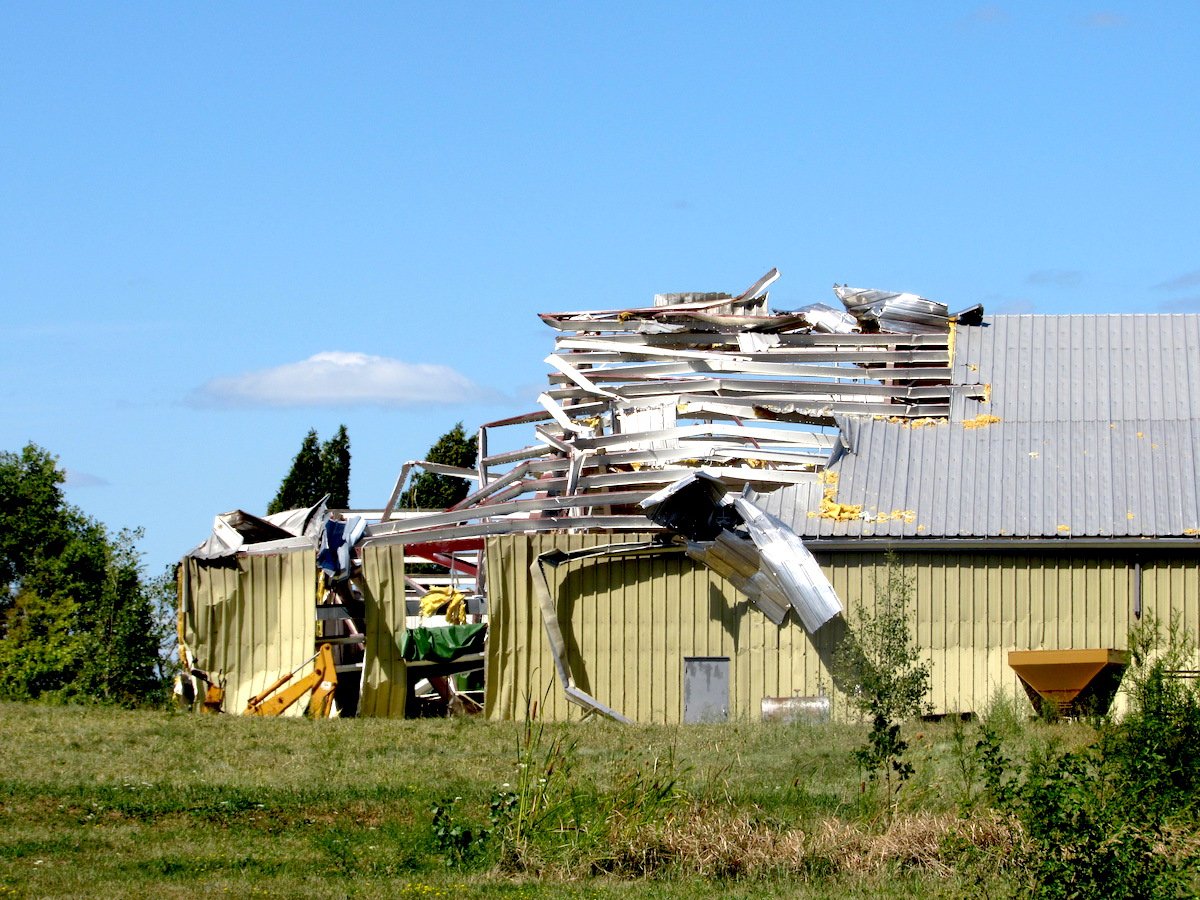 What remains of a warehouse roof in Cedar Rapids, Iowa. Photo by Avery Gregurich.

On Tuesday, August 18, eight days after the storm, President Donald Trump flew into Cedar Rapids—to survey the damage “first-hand,” Reynolds promised. Trump never left the press conference room at the airport. If he had, he would have seen the catastrophic effect the derecho had on the city, all of Linn County, and most of the state beyond.

You can follow the destruction of a tornado, chart the path a hurricane takes by the trail it leaves behind. But when an entire city is buried under its own trees, in that moment there are no economic, social, or cultural distinctions. Everything has been damaged. Everyone has been affected. It just comes down to a matter of degree.

Those familiar distinctions—of who gets to return home, of whose lives go back to what they were before—arise only in what comes after: the recovery. Or, in some cases, the lack of one.

The same day Donald Trump visited the airport conference room, I drove through Cedar Rapids over the frayed ends of downed power lines—dodging trees lying across major thoroughfares, rolling beneath stoplights that had gone dark. I parked at the top of hills and tried to count the blue tarps forming makeshift roofs on the houses below. I tucked in behind utility trucks and military vehicles that were carrying load after endless load of trash and trees. I marveled that, amid all of this chaos, the city buses still ran, and the postal carriers of the U.S.P.S. trudged through the debris, their shoulder bags full of the day’s mail.

A disaster like this one doesn’t create disparities; it merely highlights more clearly their fault lines. Between the derecho and the coronavirus pandemic, two realities emerged. In the low-rent neighborhoods, trees lay across ruptured roofs while residents sat in lawn chairs nearby. Tents were set up next to alleyways. Gas stations and discount food stores within walking distance had all run out of food days ago, and most remained without power. The gas stations had rolled their ice cream freezers to the front doors to form makeshift counters, where they were selling cigarettes and warm beer, cash only. 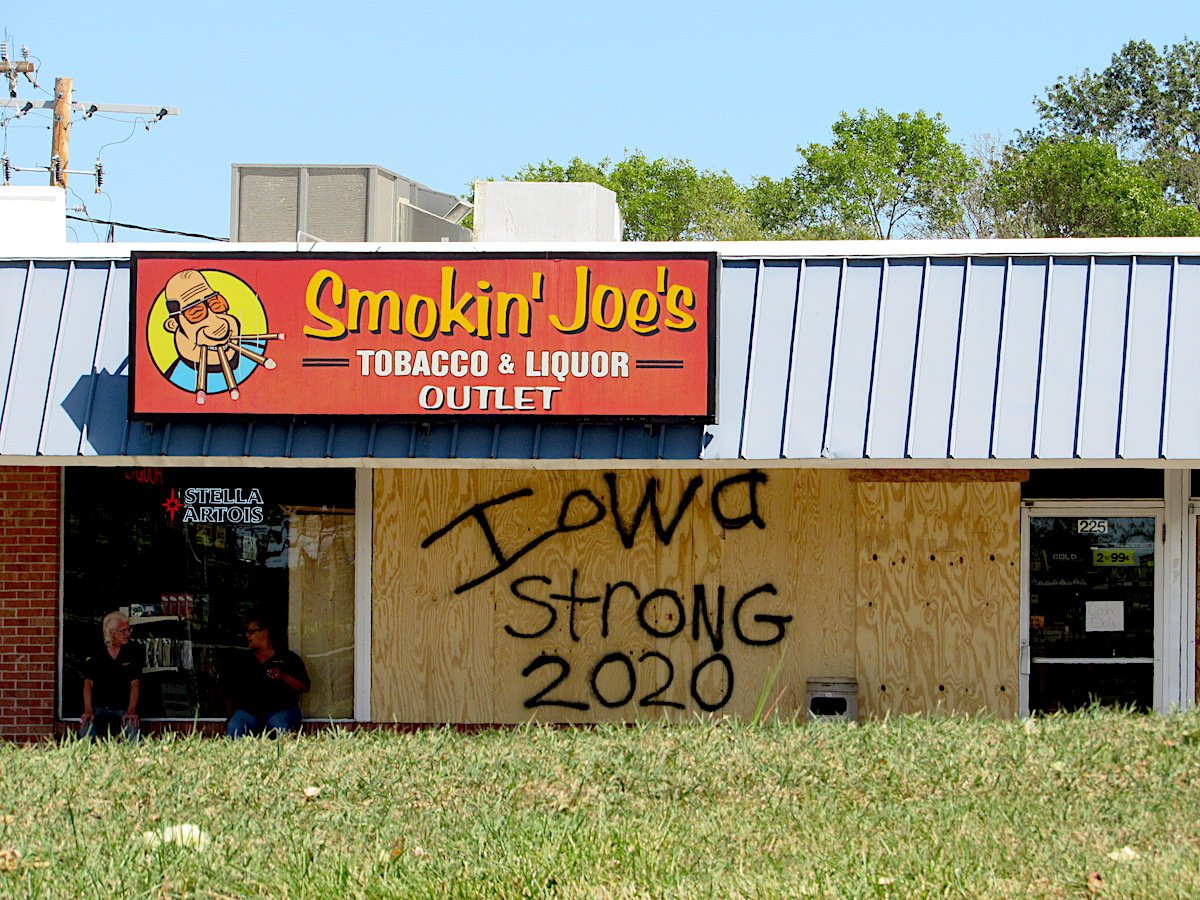 A message of hope written over busted glass on a storefront in Cedar Rapids, Iowa. Photo by Avery Gregurich.

Further up the hill, just a few blocks away, in neighborhoods where the houses cost more and sat farther apart, hired hands were removing leaves out of sprawling yards with leaf blowers. Stumps, the bare thumbs of decades-old trees sticking up all over, were the only signs of what the derecho had done. One house had returned to watering its lawn. And the driving range at the edge of town was flush with swinging clubs, whacking golf balls into the distance.

I went back into town and watched an older woman whose yard had become a wasteland of fence and limbs water a hanging basket of petunias. Near downtown, an older man sat on a milk crate and wailed through a trumpet for spare change. And I watched one boy try to ride his scooter along the sidewalk while his family watched from the grass. His wheels kept getting caught in shards of metal wire.

It seems unlikely that all the damage in the city will be repaired before another late summer storm, or before winter comes again. The trees that haven’t fallen yet hold dangerous limbs precariously in their canopies, waiting for a strong wind to knock them down. Thousands remained without power for nearly fourteen straight days. Public schools in the state’s second-largest district were scheduled to start in-person learning this week, but the district’s superintendent announced that they are still assessing the damage. Every school has been affected in some way, postponing the school year yet again, this time “indefinitely.”

The “after” across Iowa looks particularly grim, but especially so here in Cedar Rapids, which has spent the last twelve years rebuilding after the floods of 2008 (FEMA’s sixth largest disaster declaration in history). Now, what will the families currently displaced into shelters return to, and when? When will the low-income housing that was ripped apart like wet paper be rebuilt? What does a city that has lost an estimated half of all of its tree canopy look like next year? In fifty years? And what does all of this mean for the city’s air quality, its climate, its housing, its future? 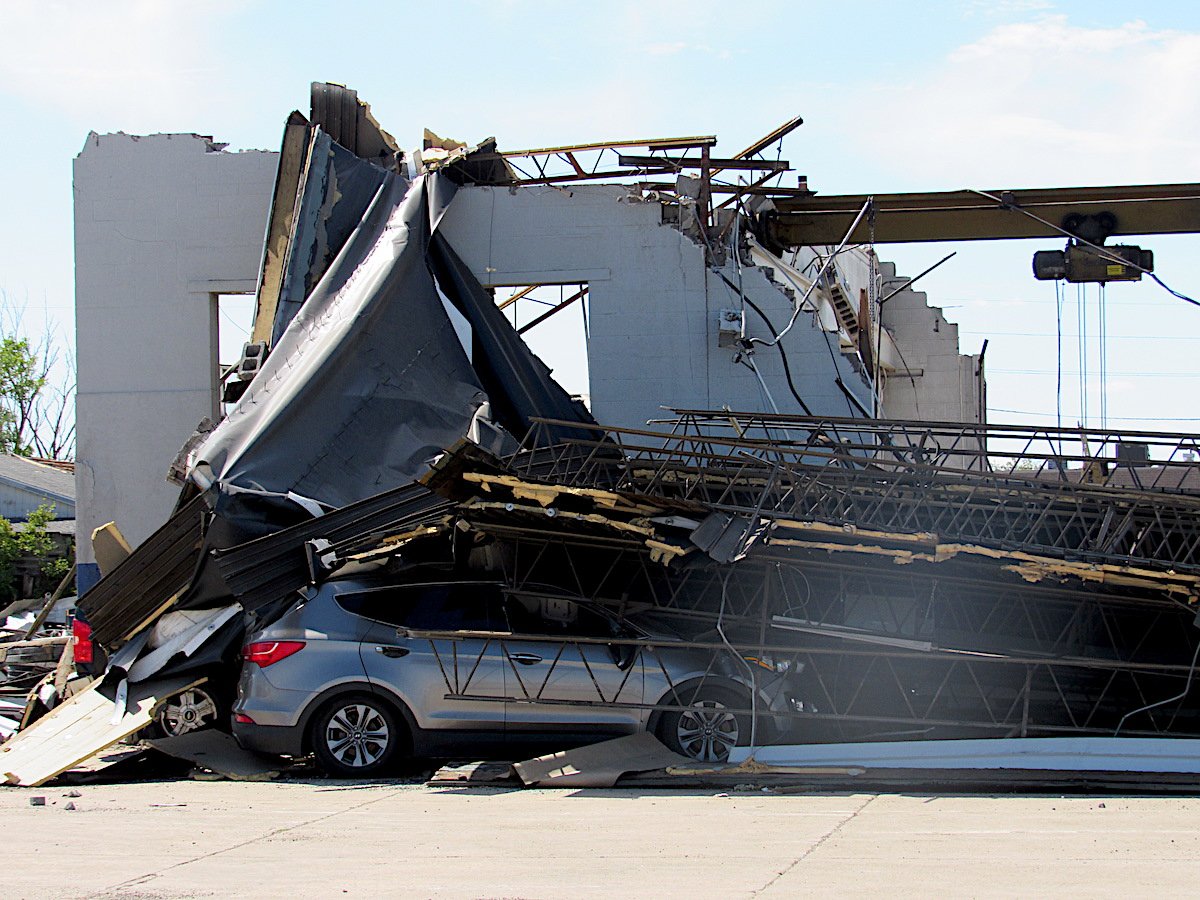 The storefront of an equipment rental service in Cedar Rapids, Iowa, damaged in the derecho. Photo by Avery Gregurich.

I drove Highway 30 home, west between countless acres of flattened corn and plumes of smoke where people had begun burning fallen trees along with the remnants of barns and other detritus of the storm. In Van Horne, I stopped to watch a high school football team running drills on their practice field. Behind the players, the school building was uninhabitable. The roof of the auditorium lay in a heap in the parking lot, metal stadium lights were bent and shattered, and the bleachers of the football field had folded in on themselves.

Yet still they practiced. One kid kept lining up field goals, an endless repetition of kicking and fetching. With each kick, the ball flew up and lingered for a moment in expectation—in hope—before it fell back to earth between, or outside of, the goalposts.

Here in Iowa, it feels to me like we’re all hanging right up there with that football. Wildfires are raging to the west, hurricanes are gathering to the south, and an unsparing pandemic rages everywhere. And here we are, among the transformative wreckage of a derecho, wondering when and where we might land. ■

For more reporting on the aftermath of, and recovery from, the derecho in Iowa, visit Iowa Public Radio and The Gazette.