Once the oldest operating prison west of the Mississippi, the facility is now empty, falling apart, and waiting for its next chapter.


The old Iowa State Penitentiary stands on fifty-five acres of hill land in Fort Madison, Iowa, on the shoulder of Highway 61, a stone’s throw from the Mississippi River. Its twenty-nine buildings are contained inside landmark walls laid with limestone mined from nearby quarries. The walls are the first thing visible when crossing over the river from Illinois, and the guard towers above the walls keep perpetual watch over the town of Fort Madison and the river beyond.

One morning in the middle of February, Rebecca Bowker lifted the lock on the front gate, trying to get in. She was planning to give me a tour through the facility, but something was wrong: a lever had frozen entirely off of the gate. “Uh-oh,” she said. “What happened here?”

That question—“What happened here?”—lingers around the old penitentiary at Fort Madison. The facility ceased operations in 2015, but its presence still looms large in the community. Empty of humans for the first time in nearly two centuries, the place has recently been the subject of a second, more urgent question: “What do we do with it now?” 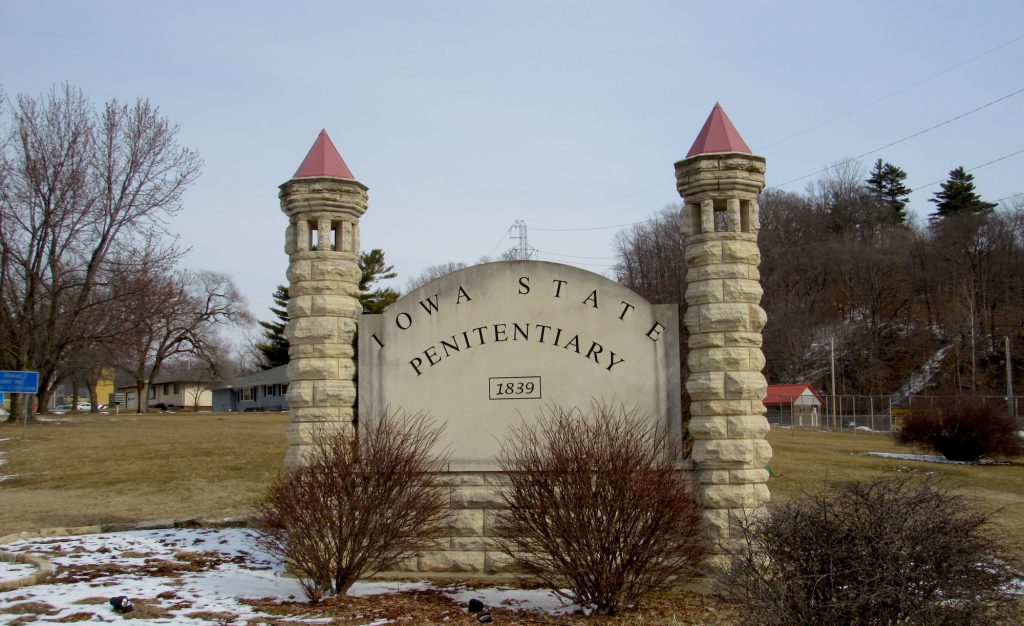 The entrance to the old Iowa State Penitentiary. Photo by Avery Gregurich.

The penitentiary accepted its first occupants in 1839, before Iowa was even a state. At the time of its closing it was the oldest operating penitentiary west of the Mississippi River. Over 176 years, it grew from a territorial penitentiary to one of many familiar, large-scale, mass incarceration institutions common across the country. In design and function, it represents nearly two centuries of evolving ideologies regarding imprisonment, punishment, and treatment of incarcerated people in the U.S. It saw one of the last four federal executions (the hanging of Victor Feguer, in 1963); a prisoner riot in 1981; and multiple escapes, including a highly-publicized escape of two people, in 2005, which directly led to the construction of a new facility.

Many people in Fort Madison (population 10,520) have a personal connection to the penitentiary. Dennis Fraise grew up in Fort Madison and serves as President of Historic Iowa State Penitentiary, or HISP, the non-profit working on finding a new use for the facility. “It’s hard to find someone in Fort Madison who doesn’t know someone who worked at the penitentiary, because it’s always been there,” he told me. “My wife babysat at the warden’s house on the grounds in her early high school years. I have an early childhood memory of attending a variety show that the inmates put on in the auditorium.”

Besides the penitentiary, Fort Madison was also once home to the Sheaffer Pen Company. After a series of buyouts, Sheaffer closed its Fort Madison production plant in 2008, and its museum last year. “For years, Fort Madison was always known as the ‘Pen City.’ It was kind of a double entendre. You can see the facilities one from the other,” Dennis Fraise said. “When you look at both of those facilities being shuttered right now, it’s really kind of a blow to the identity of the town.”

These days, Fort Madison is quiet apart from the trains, close to one hundred of which pass through every day, crossing the river on the double-deck Santa Fe Swing Span Bridge. The Tax Cut and Jobs Act of 2017 listed the town as an Opportunity Zone by the IRS, described as “economically-distressed communities,” meaning investors could receive tax benefits for planning developments in Fort Madison. There are no larger opportunities for redevelopment in this area than the penitentiary, and the state of Iowa is beginning to market it to potential investors.

At the county museum, housed in an historic Atchison, Topeka and Santa Fe Railway depot, I met the President of the North Lee County Historical Society, Andy Andrews. Andrews saved an original cell door from the penitentiary and built a cell in the museum, complete with a prop inmate, Charlie. Andrews would like to see as much of the penitentiary as possible preserved in its original state and opened as a museum. He points to the Missouri State Penitentiary, in Jefferson City—which bills itself as the “Bloodiest 47 Acres in America”—as a blueprint for what could be done with the penitentiary in Fort Madison. 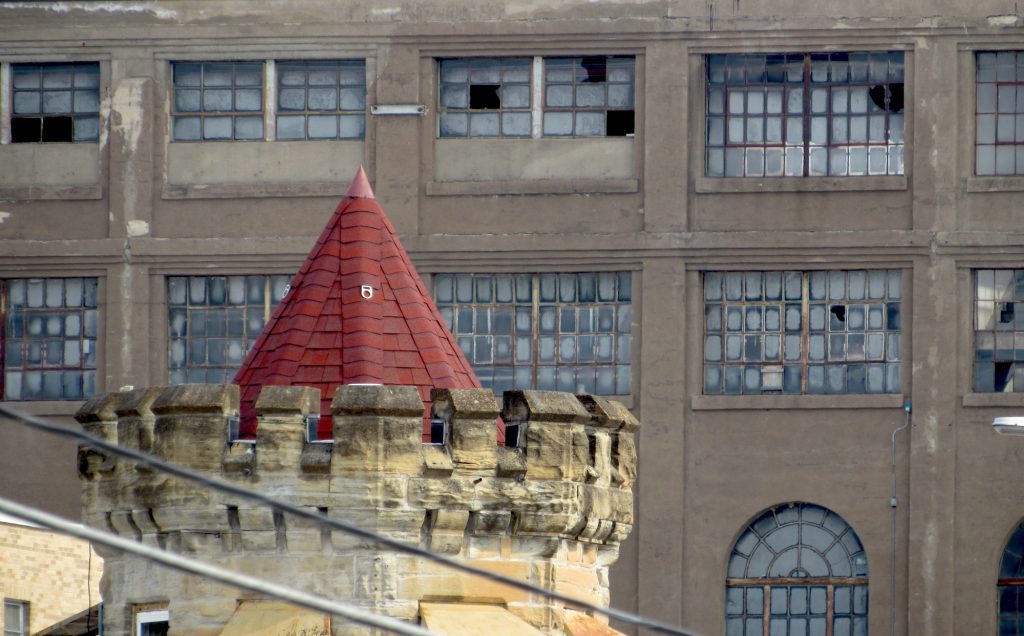 A museum is just one of countless options for the institution’s future. (A Historic Structures report from 2018 states: “Future use ideas are somewhat unlimited.”) Some ideas on the list include an event space, commercial developments, manufacturing areas, a microbrewery, and condos. Other abandoned penitentiaries, like Michigan State Prison, in Jackson, have renovated to accommodate residential apartments, multiple art galleries, and even a bicycle cooperative.

But re-purposing a vacant, two-hundred-year-old site, especially a site specifically designed to keep some people in and everyone else out, presents a series of obvious and steep financial challenges. “Every single building on that site has to have brand new heating, cooling, and electrical systems,” Rebecca Bowker told me. “Probably some of the plumbing needs to be redone, let alone the ADA accessibility. All those little components will cost a lot of money, so it’s a very big project.”

The 2018 Historic Structures Report was more explicit about the condition of the facilities: “Many buildings had signs of rodent/bird or other animal activity, contained varying quantities of animal/bird poop, and/or dead rodents/birds.” If the lever is any indication, the last three-and-a-half years of abandonment and Iowa weather have wreaked havoc on the penitentiary’s infrastructure.

“We’ve had people die there, you know, both staff and offenders, and we have to be respectful to their families. I don’t want to turn it into a ‘ghost busters,’ for lack of a better word,” Wachtendorf said. “I do not want to see anything that’s disrespectful to those that lived there or to those that worked there. There’s a second, third, and fourth order here of effects of the people that have lived there.”

Existential questions always surround prisons—especially, it seems, when they’re empty. The penitentiary has been a consistent way of life for many in Fort Madison, as decade after decade, generations of the town’s residents worked within the walls. But they also represent a tradition of incarceration, a monument to the darkest parts of society. If whoever purchases the facility chooses to preserve the penitentiary as is, as other states have done, what exactly is being saved? 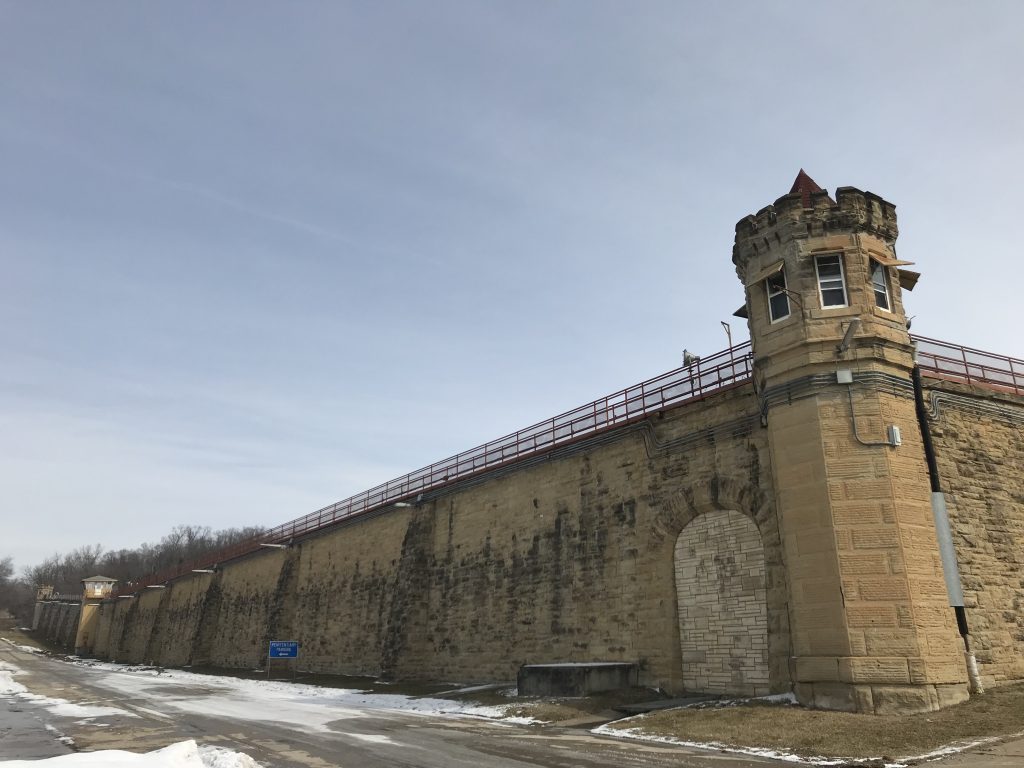 The western wall of the old Iowa State Penitentiary. Photo by Sara Williams.

The penitentiary’s landmark walls, portions of which have been included in nearly every plan to preserve or renovate the compound, represent, in brick and mortar, the collision of past and present. Whether this facility tries to transform itself into a tourist attraction, housing units, or something else not yet thought of, Fort Madison hasn’t known a time without this penitentiary. And, until a developer comes along with an all-encompassing plan and a healthy budget, it isn’t going anywhere.

Today, as it has every day since the institution closed, the state of Iowa fills the buildings there with a minimum of heat. The lights still burn to the tune of close to $1,000 a day. But what those lights are illuminating now, both for the town of Fort Madison, and for the rest of a country coming to terms with a complicated history of criminal justice, is muddled in shadow. Whoever decides to purchase the compound will have to decide what to do with the unseen weight of nearly two centuries of history here, as well as the physical remnants of what it has left behind.

For now, it’s a waiting game fitting for the subject—a penitentiary standing by for a sentence of its own. ■

Avery Gregurich is a writer living and working in Des Moines, Iowa. He was raised next to the Mississippi River and has never strayed too far from it.

Sara Williams is an artist currently living in Des Moines, Iowa. She spends all of her free time happily distracted by Iowa’s waterways, timbers, farms and fields. To see more of her artwork, visit http://tenacioustimbers.com/.