Judge A Book By Its Cover

Let me be honest. I judge books by their covers. I mean, not entirely — it’s never stopped me from reading a good book — but it has tipped me over the edge and led me to buy a book I was on the fence about, or made my decision easier when I had to choose between two books. I own one book that I didn’t make it through the first chapter — but it’s got a great cover. Last summer I had a Camus reading marathon which, while I truly do love his work, was also an excuse to buy a bunch of books for their covers. Each one is adorned with a lovely, bold, abstract graphic black and white design. I wish they were posters. I Instagrammed them all together. They are now organized proudly on my bookshelf. 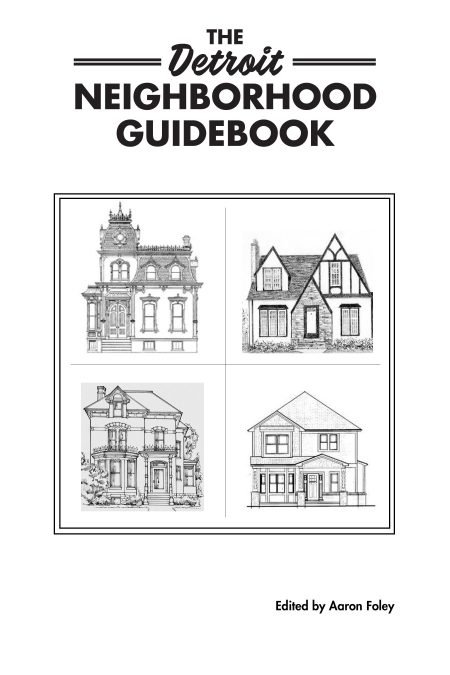 I also feel like I read more when a book has a great cover. When it’s resting on my nightstand, it draws me in and invites me to pick it up. Maybe just one quick chapter. When I read in public, I proudly leave it out on the table instead of stuffing it back in my bag. It’s like the literary equivalent of staying out a little bit later because your outfit is so cute and you just want to show off for a little bit longer.

When I learned about The Detroit Neighborhood Guidebook, my mind immediately went to those old guidebooks and handbooks from the early- to mid-20th century. The textured canvas covers, black and white and maybe one spot color splashed behind the line work of simple illustrations, always matching the color of the cover. I thought this would be really fun to emulate, and hoped it would stand out next to more modern-looking covers.

For the title, I wanted to create a nice locked-up unit. I chose a good, sturdy, period-appropriate typeface (Futura Bold) for the bulk of it, and highlighted “Detroit” with a contrasting brush script (Calafia.) I liked Calafia a lot for this because it is so well drawn and authentic-looking, like it was pulled straight off of an old hand-painted sign.

[blocktext align=”left”]I want to design covers
that people are proud
to be seen with.[/blocktext]Something like 65% of our city’s housing are detached single-family homes, far exceeding other cities’ averages. I wanted to call out this unique feature, so I illustrated four homes, focusing on common types of architecture found in Detroit’s neighborhoods. Full disclosure: I live in the Bagley brick colonial on the bottom left. We also included an apartment building for good measure; I chose the beautiful art deco Kean building on Jefferson, near the Gold Coast and Rivertown neighborhoods that make an appearance in the book.

When I worked on Aaron’s previous book, How to Live in Detroit Without Being a Jackass, he already had the idea for the cover. I created the Vernors-style “Detroit” custom for the project. First, I searched for a typeface that looked as close as I could find to the Vernors logo — I settled on Century Schoolbook Bold. But to add that little flair on V, I had to do some Frankenstein surgery. I found a good image of the actual Vernors logo and traced over the curl in Adobe Illustrator to make it a vector shape, and then combined it with the D from the typeface I chose. After that, I drew out the thick green and yellow outlines. The green-tinted woodgrain and yellow stripe behind the author’s name are a nod to the pop’s label design. And one of my favorite parts is the sticker — I used an image of an actual sticker and some handy photoshop effects to make it look like the words were actually embossed on it. 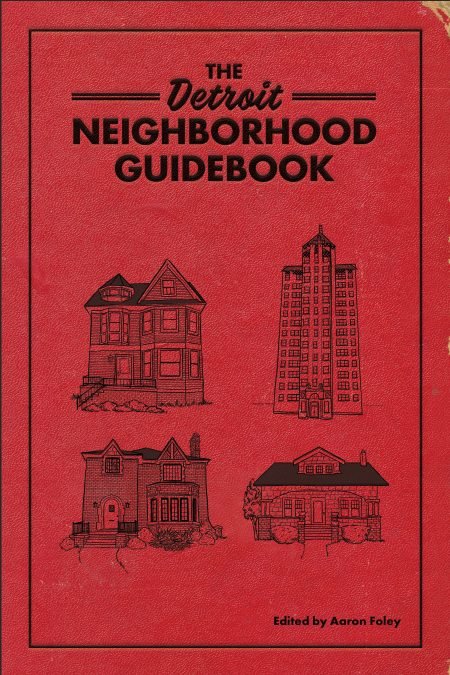 I’ve also designed a few city anthology books for Belt Publishing, including A Detroit Anthology, which was my first. These books feature artwork from their respective local artists, so I had access to some really wonderful photography. For covers like these, I consider how I can add a title that fits in the environment, or how I can include information in a pleasing, easy-to-read way that doesn’t compete with the image. I also make decisions based on context and concept — that rusty red-orange stands out next to the black and white photo, but any bright color would. I chose a rust color because this is a series about the Rust Belt. I realize it sounds like a bad pun, but it’s actually how the decision was made. Why is the title in a rust-colored circle? For the simple design reason that the shape stood out against the grid-like windows behind it, though someone did mention that it was reminiscent of the Heidelberg polka dot house.

Sometimes the covers are conceptual, and sometimes they’re not. Sometimes they take lots of research and multiple artistic processes, and other times they fall into place pretty quickly and easily. But the goal is always the same: make it stand out. Make it look good. Real good.

___
Haley Stone is an art director-designer-illustrator living and working in Detroit, Michigan. The Detroit Neighborhood Guidebook, forthcoming in August, is the sixth book she has designed for Belt Publishing.