Not far from the ersatz splendor of downtown Cleveland with its god-sized chandelier and soulless schmaltz, a man is keeping the past alive. 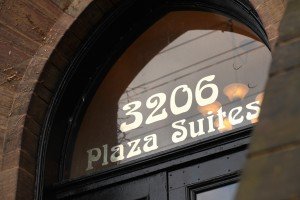 Sinewy muscles visible from beneath his signature black t-shirt, and smirking as he readjusts the sprinkler’s gushing head to fan across the Plaza’s garden “oasis,” Eyal Katz resembles a mixture of 18th Century Jewish pugilist and a horticulturist of unbridled professionalism. Eyal bought the Plaza Suites, home now to some fifty Clevelanders, in the 1980s for just shy of a million dollars. The place was a rough joint in those days, home to junkies and a snarling cadre of hop-headed prostitutes with, one imagines, names like Chastity and Angry Ann. Later, David Thomas, lead singer of the experimental rock group Pere Ubu would claim a room in the upper turret, referring to the Plaza in his oft-emulated yawl as “Cleveland’s very own Chelsea hotel.” While the place is indeed home to artists of all stripes (the guy who used to live in my place wallpapered one room with portraits of women’s backs), the Plaza is more of a wounded historical titan than anything as eclectic as New York’s artist retreats. As such, the place is pure Cleveland: a dusty-souled haven pulsing with dignity and life. 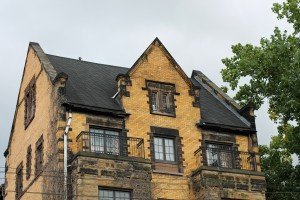 Watching Katz position the sprinkler in the small and manicured garden (two oaks snake skyward, creating a tree-house effect for the upper apartments) or slink down the creaky stairs to his basement tool room (ten feet from a vintage arcade machine reconfigured with every 8-bit game imaginable), it’s not difficult to imagine the building as a breathing thing: mysterious, aging, and filled with surprises. Did I mention there’s at least one haunted apartment?

I took up residence in the Plaza almost two years ago and have spent the ensuing months documenting its various colored fixtures, creaking steps, and surfeit of claw foot tubs. 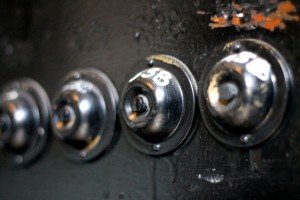 I’ve spent a dozen collective hours peeling my bike from the ranks chained to the rack by the radiator in the subterranean bike room. Like the rest of the Plaza, the bike room is a phantasm. The plain walls have cracked to reveal peculiar insulation — yellowed newspaper circa 1965.

Indeed, every dining room crevice and hall cupboard, every winding chandeliered staircase in the Plaza holds a secret, some lavish, some unsettling, but all hidden keys to the still-pulsing heart of Cleveland’s past. One expects to find the Torso Butcher’s ramblings etched into the brick beneath the ivy on the building’s sprawling western facade. Or to see a phantom Elliot Ness leaping briskly across the steeples above, in hot pursuit of one of Cohen’s best and brightest gunners. 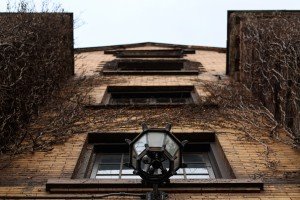 Eyal Katz has done his best to keep this place vintage. It’s a microcosm of the Rust Belt’s integrity, its grit. Once in a cavernous cupboard beside a grinding steam heater, I found a photo of a young yellow-toothed couple in turquoise polyester, smiling portentously, as if they knew they would be the first in a series of clues, some slipping in slowly, others revealing themselves with a frantic intensity, and all revealing, piece by piece, the history of the greatest Ohio city.

I can say that with relative validity as I’ve traveled to most of them. I hail from Medina. Once a bucolic little hamlet almost Winesburgian in its obscurity, Medina is now home to the white-washed suburban sprawl that typifies most modern country realms. Kids who once drove tractors to school now roar through the hills in Land Rovers and throbbing Cadillac Escalades. It’s no surprise that Medina’s most famous resident, Ryan Dunn — the scraggly bearded Jackass troubadour — ended up dying in a speeding car engulfed in flames. The speed and ferocity of suburban advancement and its accompanying ennui, the construct of all constructs, takes its toll. In the country, wanderlust invariably breeds catastrophe. 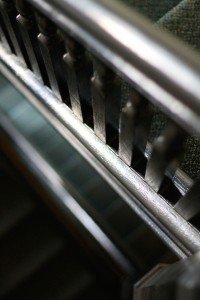 Cleveland, on the other hand, has its rusty ballast deeply rooted. Those who wanted freedom have fled. The others just sallied on. Building and tinkering and scoffing when outsiders opined that by all rights they ought to be miserable here. They ought to be seeking their fortunes elsewhere.

Katz stands in direct opposition to this bastard child of the frontier myth. He came to Cleveland to prosper. And he has. But he’s kept the ghost of the past alive in his Plaza.

The mighty titan looks gothic from the street. Swaddled in ivy, the cryptic peaks smirk in direct sunlight. Puckish gargoyles stare at you from the shadows. Below, the doorways are tall enough for Lurch Addams to enter without a bow. And still lower, in the condemned basement apartment attached to the bike room, a maniac once painted on the walls life-size women with flaming breasts that would make William Blake writhe with envy. Those women aren’t going anywhere. They are affixed in the gloom and sustained by the cracks in the plaster that allow the sun to spray across them from time to time in gloried Impressionist splashes.

Pleasantly trapped is how we Clevelanders see ourselves. The other world is merely an illusion befitted with borders of clotted sky, but lacking the nourishing mixture of decay and refinement that caught Katz’s eye and that I refer to now as home.

Kevin Tasker is a Cleveland-based writer.