“A large city, near the Miller Factory”: The Glorious Rise and Mysterious Disappearance of the Great Midwestern Brewer

The following is an excerpt from The Brewer’s Tale: A History of the World According to Beer by William Bostwick:

Yelp reviews of the Miller factory tour are, to be blunt, as bland as the beer. “Kinda cheesey but that’s OK,” one reads. “Better than I expected,” says another. Bottom line? “It’s free, people!” It has, one optimistic reviewer wrote, “the possibility of being fun.” A potential, it was clear, based on the number of samples at the end. All agreed the free pours were the tour’s best part, but adjectives were rare. Gone is the poetry heaped on coveted abbey brews or the rarest lambics. “Wonderfully cool,” one reviewer wrote about the sample pour of Miller Lite — or was it the MGD64? Folks didn’t seem picky. “Did I mention it was free?” Without fail, every review does.

I went to Milwaukee by ferry, nosing my station wagon into the hold of the boat with a few dozen other bleary tourists, donuts and drive-through coffee steaming up the windshields of their rental cars. Gray lake, gray sky, gray clouds — into the gloom we sailed. A fitting, if faint echo, I thought, of Miller’s glory days, when drinkers would ride trams up to the bluffs over Whitefish Bay for a day of Great Lakes sun.

In the nineteenth century, a trip to the Miller brewery was a bucolic escape from industrial city life. Biergartens were all the rage, and brewers competed in size and lavish style, serving barrel after barrel of light, refreshing lager beer to their German countrymen, thirsty for a taste of home.

Picture them: Rolling lawns swarmed with thousands of revelers, the tinkling din of steins raised in toasts, the men joining arms in their performance groups, called Turnverein, to sing throaty choruses of the homeland, or put on impromptu shows of acrobatic skill. Dangerous surely, even under lager’s more lighthearted spell, but nothing like the marksmanship competitions held at some of the breweries’ backyard firing ranges — true tests of the drink’s intoxicating properties. While the men danced, sang, and shot, women in their Sunday best, twirled their parasols, strolling among the flower beds sipping mocha coffees — a new drink, made popular at the Miller garden — and nibbling cakes plucked from passing waiters’ silver trays. This was the warm, bright Gemütlichkeit the Germans brought, and Americans took to it with a passion. Rivers of lager poured through the gardens, faster and more roaring than the darker beers of days past. The New York Times reported in 1877 that Budweiser drinkers typically drained three times as much beer as those who drank the darker bocks and malty dortmunders of previous generations. On a good day, guests at the Miller garden emptied nearly 2,000 gallons.

The more they brewed, the more they sold, and the more lush their gardens grew. At Miller’s, high on a bluff above the Menomenee River, drinkers could hike a 35-foot observation tower for “a striking view of the then unsettled river valley,” a mid-century ode to the park in the St. Louis Sentinel recalled. At Schlitz’s — built in 1896 for a whopping $75,000 — the tower was 60 feet. Frederick Miller let visitors sneak around a state-run toll road by detouring their buggies through his private grounds; Pabst set up a direct trolly line to shuttle drinkers from downtown Milwaukee to his seven-acre Bielefeld Garden on Whitefish Bay. George Ehret’s $220,000 garden in Weehawken, New Jersey had its own ferry service from Manhattan.

For me, though, my trip to Miller felt more a bracing plunge into the cold pit of industry than a warming pastoral escape from it. I was coming to the end of a cross-country beer tour, and the breweries I had visited so far were quaint craft affairs. Some had reception areas, a few had gift shops, and some, just a bar in front of the fermentation tanks with fresh beer, board games, organic burgers, and malted-grain pretzels. I’d usually show up unannounced. I’d find a wandering employee, and they’d call into the back — out would tromp a brewer in rubber boots. He’d dry his hands on the seat of his overalls, grab me a beer, and show me around. No safety glasses? No problem. “You’re a home brewer?” he’d ask. “You’re probably good.” And he’d lead me into the back, hopping over hoses, squeezing between fermenters, ducking into basement barrel rooms. He’d pull tastes from this tank or that, or snag a freshly filled bottle right off the conveyor belt — watch your fingers. (The best way to taste it, said one brewer, as he reached around a Lexan safety screen with a Mr. Bill doll masking-taped atop it, when the beer is still churned up and creamy from the filling process.) Things at these breweries were always under construction, being built or just barely hanging together. One Michigan brewery I toured boiled their wort in an army-issue coffee maker and fermented in a peanut butter storage tank snagged from a closing Quaker Oats bakery; another fed caps into its brand-new German bottler down a piece of vinyl gutter hung from the ceiling.

Miller would be different. First of all, I had to call ahead (931-BEER). I had to get tickets. I had an appointment. I’d be chaperoned. In craft breweries’ slap-dash spunkiness, I saw a human hand — each piece of masking tape, each humble, home-grown fix leaving a deep, personal fingerprint on every pint of beer they made. At the other end of the bland grayness of Lake Michigan was a faceless factory.

The ferry ride was uneventful. The sky stayed gray and drizzly. I pulled off the boat without a map, a little nervous I’d miss my appointment. How strict did they keep Miller Time? I shouldn’t have worried. There’s an old joke about St. Louis: “a large city on the Mississippi, located near the Anheuser-Busch plant.” Even in Milwaukee’s drizzly haze, I couldn’t miss the giant Miller sign. Miller wouldn’t be an escape from city life; Miller was the city itself.

At Founders, I had shared the parking lot with a Christian scooter gang; at Kuhnhenn’s, a dusty pick-up with local-pride bumper stickers (“Say Yah to Da U.P., Eh!”). Miller’s lot was packed with RVs and tour busses. Rogue’s was patrolled by chickens, Sierra’s perfumed with hop dust. Miller’s lot was strewn with hot dog wrappers and broken-off wrist bands. The beer garden was gone but its spectacle remained.

And where, among these mechanized marvels, where in this temple to capitalist efficiency, where was the brewer? Buried alive. The rain began to fall harder, and we trumped down into the caves. It was here we conjured the ghost of Frederick Miller. 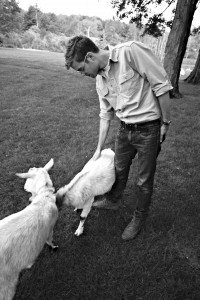 Carl Best built these lagering caves in the 1850s, chasing his big brother Phillip’s success. The older sibling’s Best Brewery, soon renamed Pabst, was on track to be the world’s largest; but poor Carl’s Plank Road Brewery tanked and, bankrupt, he sold the empty caves to Frederick Miller in 1856. Today, they’re hallowed ground, vitrines of vintage bottles, illuminated relic-like by wrought-iron pendant lights. The Miller Girl in the Moon swings above like a censer. (My favorite piece of so-called breweriana, she’s graced Miller’s packaging, sometimes prominently, sometimes as a hidden “easter egg,” since the early 1900s.) And then, the pendant lights dim and the man himself, Frederick Miller, appears. He’s a hologram projected on the cave’s back wall. I’m taken aback at first, but then I realize he fits perfectly. Miller is all tech now, linked to the past in ghostly image only, and the brewer isn’t a person, he’s a marketing trick. That’s the essence of Miller, on display: Machines make beer; people sell it.

I didn’t try to brew a recreation of Miller at home, as I had done with herbal Viking grog, traditional British IPAs, or Westvleteren’s medieval monk-brewed XXI. Why bother? The flavor of those beers told the story of their creation — or rather, the story of the brewer who created them. Miller’s lack thereof speaks to an equally polished-pure process. No hand imprints that frosty bottle, nor its watery taste — Miller is machine-made, human-consumed. It felt a more authentic experience, and truer to the beer’s story, to buy some paraphernalia at the gift shop, and a bottle of beer at the corner store on the way home. The trail had run cold. There was no brewer I could channel. To truly understand the nature of Miller, I had to buy it.

My six-pack of High Life cost $5.99; my Girl in the Moon magnet was only fifty cents. The beer tasted light and thin and sweet, with just a touch of sugary citrus — not fresh-squeezed, but more like SunnyD; watery, day-old corn flakes dusted with powdered Tang. It didn’t conjure a story of its creation, but rather hazy collegiate memories of consumption. It tasted just as it always has; just as, surely, it always will. The magnet remains on my bathroom mirror.

Back at Miller, the post-tour beers were, indeed, free. At the “Bavarian-style Miller Inn,” we munched Chex Mix, we drank, we wrote some post cards. “Welcome to Miller Valley,” they said, above an old-timey sepia photo — not of the factory, or of a brewer, but, naturally, of a salesman, proud and apron clad, peering out under a wide brimmed hat and driving a pair of horses pulling a wagon laden with barrels. “Do you know what time it is?” I wrote to friends. As if they couldn’t guess.

The Brewer’s Tale: A History of the World According to Beer is available for purchase on Amazon.com via the following link: http://amzn.to/1nXoxVJ