LeBron’s Legacy: The King Hits The Road (Again) But This Time He’s Leaving A Bit Of Himself Behind

The first time LeBron James left the Cleveland Cavaliers, the NBA team that plays just forty miles up the road from his hometown of Akron, he was savaged as “callous,” “heartless,” and “cowardly.” And that’s just what team owner Dan Gilbert called him in an angry open letter, typed in Comic Sans, that gave voice to the many jersey-burning fans who felt abandoned by James in the summer of 2010. Then twenty-five years old, the phenom who’d already been dubbed “King” spent the first six seasons of his career trying to break Cleveland’s decades-old sports curse. But he’d failed, and like so many promising young people before him, left Ohio for the coast.

The prodigal son returned in 2014, only to leave again earlier this summer, signing with the Los Angeles Lakers. But eight years after “The Decision,” James’ second departure didn’t ignite the same passions, or the same number of jerseys, as the first one. Gilbert even wrote him a nice letter, in the Arial font.

A lot changed between the first time James left Cleveland and the second. For starters, he delivered on the promise he made when he re-signed with the Cavs and brought an NBA title to Cleveland, a city so bereft of sports championships that winning one sparked an identity crisis for some fans. James also made his announcement differently this time. Unlike in 2010, when he built suspense in a seventy-five-minute ESPN special that culminated in the “self-aggrandizing” (Gilbert’s words again) announcement that he would “take [his] talents to South Beach,” James simply had his agent put out a one-sentence press release.

But the biggest difference between James in 2010 and 2018 has nothing to do basketball. Fourteen years into his career, James has built a reputation as the sports world’s most prominent philanthropist, with his efforts focus primarily on the children of Akron. The work of the Lebron James Family Foundation (LJFF), which opens a public school today, Tuesday, July 31, has ensured that his legacy in Northeast Ohio extends far beyond banners and rings. If fans, and Cavs ownership, felt abandoned by James in 2010, they don’t in 2018, because even as he’s taking his talents to South Central, he’s leaving his heart in the Midwest.

“It doesn’t matter where LeBron’s day job takes him. Regardless of where he works, his commitment to the kids and families here will never change,” Michele Campbell, executive director of LJFF, says. “Not one thing about his programs or his efforts will change now that he’s wearing a different uniform.”

Fourteen years into his career, James has built a reputation as the sports world’s most prominent philanthropist…

The LJFF began in 2004, before James even joined the NBA, and at its outset, the programming was modest. An annual bikeathon served as the marquee event and James, through the foundation, performed the kind of charitable work often seen from athletes, such as serving Thanksgiving meals to needy families.

But in 2011 something changed. The bikeathon, which James promoted as a bit of joy in the lives of kids who “don’t get an opportunity to have fun all the time,” was renamed Wheels for Education and its mission was broadened. In addition to free bikes, 360 students entering third grade in Akron were put in an intensive two-week summer program with reading intervention and technology skills classes. They also received a laptop, school supplies, a high school-aged mentor, and the promise that the foundation would stick by them as they progressed through school.

The evolution of James’ philanthropic efforts in Akron have never been explicitly linked to his move to Miami and the subsequent backlash, but it’s hard to ignore the timing. Just after becoming a villain in Northeast Ohio, he doubled down on his efforts to be a hero. And in a 2011 interview with the Akron Beacon Journal he made his annoyance at his critics clear: “A few people here criticizing me is not going to stop me from doing the things I feel need done in this city.”

James deepened his commitment to his hometown while in Miami, giving $240,000 from his foundation to renovate the Akron Boys & Girls Club. when he became a free agent in 2014, he returned home and in a letter announcing his decision, he wrote, “I feel my calling here goes above basketball. I have a responsibility to lead, in more ways than one, and I take that very seriously.” 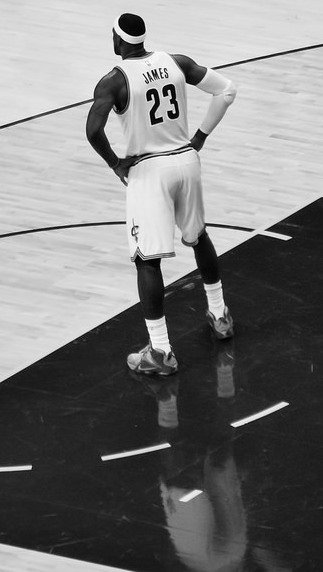 A month after making the announcement, which made most Ohioans forgive his past transgression, the third graders who made up the first Wheels for Education class entered middle school. And with that chance came another: They were transitioned into the LJFF’s I Promise program, which provides after-school intervention, incentives for academic achievement, and regular outings to help close the opportunity gap for middle and high school students.

A year later, James gave the students in the program another gift: The chance to go to the University of Akron for free. For the next decade, students in the I Promise program who graduate from high school and meet a handful of academic requirements, will be able to attend the university on a full, four-year scholarship.

“This is one of the best things I’ve ever been a part of,” James said when the scholarships were announced. It was around this time that his work with the LJFF began to get national attention. The non-profit space is littered with ineffective charities bearing the names of athletes who, at best, are well-meaning but disorganized, and at worst, are taking advantage of the tax benefits and PR perks that come with slapping one’s name on a foundation.

Given its work with thousands of Akron students, it was only natural that LJFF would begin to work closely with Akron Public Schools (APS), which has for years received support from the foundation for its Akron After School program. That relationship deepened in early 2017 when the LJFF created LeBron’s Hard Work Club at twenty-eight Akron elementary and middle schools without after-school programing.

Later in 2017, the relationship became a true partnership with the announcement of the I Promise School, an Akron Public School that will serve the students who take part in the I Promise program.

“This school is so important to me because our vision is to create a place for the kids in Akron who need it most – those that could fall through the cracks if we don’t do something,” James said in a statement. “We’ve learned over the years what works and what motivates them, and now we can bring all of that together in one place along with the right resources and experts. If we get to them early enough, we can hopefully keep them on the right track to a bigger and brighter future for themselves and their families.”

The school, which will open with third and fourth graders, will emphasize STEM education and the LJFF’s “We Are Family” motto. With students who are identified as being “at-risk,” it will also put an emphasis on helping students who’ve experienced trauma, poverty, and violence.

But it won’t stop there. “The I Promise School will take a unique approach to educating these students and that includes intentional focus on their families as well,” Campbell tells Belt. Parents will be offered financial literacy courses and GED classes. Through a partnership with a local heal clinic, families will also receive health care access. The ambitious project is meant not just to improve the lives of students and families directly involved in the school, but to “create a new model for urban public education for not only Northeast Ohio, but for the entire country,” Campbell said.

“It doesn’t matter where LeBron’s day job takes him. Regardless of where he works, his commitment to the kids and families here will never change.”

Though his work on behalf of students in Akron remains his primary philanthropic achievement, James and his foundation have spread the love well beyond Ohio’s borders. The LJFF has renovated Boys & Girls Clubs around the country and he’s a longtime supporter of After-School All-Stars, an organization that provides after school programming for more than 70,000 low-income students in the U.S.

Emily Ausbrook, CMO of After-School All-Stars, says that James has been a key supporter of the organization and remains an “inspiration to all our youth.” She’s confident that “his commitment to underserved kids, especially in Ohio” will be unwavering, regardless of where he’s playing.

“I’d say that After-School All-Stars has been so fortunate that Lebron James cares so deeply about education and children, particularly those children that came from similar backgrounds to his own,” she says.

That’s a key point. Over and over again, when James lays out his philanthropic goals, he mentions his own childhood, which saw him and his mother bounce around the homes of friends and family as she struggled to find a permanent place for her and her son.

“The biggest thing I can say is that his connection is so real and so strong with this community because he was one of these kids,” Campbell says. “He sees himself in them and he knows their struggles.”

Adam K. Raymond is a writer in Louisville, Kentucky.