What’s The Q: LeBron, Trump, and the RNC

For the RNC, the California delegation is staying at the Kalahari Resort and Water Park in Sandusky, Ohio, 62 miles from Quicken Loans Arena, also known as the Q, where the  convention will be held. Meanwhile, many media outlets are scrambling to find cheap accommodations closer to the upcoming gathering of confused Republicans in Cleveland. It is the second time this city has hosted the RNC and the first since the city began its steady economic downfall.

Here in Cleveland we have been following RNC news for over two years now, ever since the city victoriously announced snagging the prized convention to the huzzahs of the muckety-mucks and groans of progressives as well as economists, who know such events almost never bring in the projected revenue. “We got the RNC!” has been touted as the first item in a list of examples of this city’s “turnaround” in countless boardrooms and barrooms — usually followed by mentions of all the great new brewpubs and an uptick in young white millennials biking downtown.

But suddenly, that chipper narrative — Cleveland is sorta kinda doing better! — has been eclipsed. Cleveland is a winner! The city’s sports drought, a 52-year-long streak paralleled by a similar run of economic malaise, ended as unpredictably as did the GOP primary season, with a come-from-behind win. Right now, just a few weeks before the air-conditioned van from Sandusky carrying the California Republicans arrives at the Q, also home of the champion Cavaliers, not only does the nation not know what to think of the RNC, but the city does not know what to think of itself.

The Cleveland sports curse built up over the years into a monstrous civic psychosis: Clevelanders are doomed; the world does not care about Cleveland; Cleveland can do nothing right. It is not accurate to call this self-deprecation, because at root there is an arrogance, a root belief in the superiority of the Clevelander, despite others who hold the city down. To whit: the ubiquitous “Cleveland vs. The World” and “Cleveland vs. Everybody” t-shirts (tellingly, t-shirt makers make a brisk business selling similar shirts to every other Rust Belt city; “Detroit vs. Everybody” may be even more popular; perhaps “England vs. Everybody” will be next).

The storybook final game of the Cavs series merged with the arc of the LeBron James epic (local hero rises, then, flawed, leaves, only to return home, victorious) to overwhelm the entire metropolitan area — as well as the millions who once lived here and moved away when the jobs left, those people often cited often by both Sanders and Trump when bemoaning trade agreements of the past forty years. The Sun Belt may have been made rich on the backs of the Rust Belt, but the spread of Cleveland sports fans is wider because of  depopulation.

Suddenly on Sunday all the economic narratives were suspended and all the streets were lit, and it seemed as if yes, it was true — once the city had a championship all would turn bright: sickness cured, hearts healed, jobs offered. It was a mass suspension of realism, a wall-to-wall shift to good will. My Facebook feed was constantly being updated with pictures and videos of people giving each other high fives as they walked around the streets of the inner city at 3:00 am. The police updated my Twitter feed with lighthearted requests not to jump on the fire trucks and incredibly, given the hordes of drunk celebrators, there were only a few very minor arrests.

This peaceful behavior continued through Wednesday, during the championship parade, when a reported 1.3 million people spent 8 hours standing and waiting, without shade or port-a-potties, with only a few scattered arrests at the end of the day. Police were busy taking selfies. This in a city that is under a Department of Justice consent decree for the unconstitutional behavior of its police, and that saw the killing of a twelve-year-old boy by a cop who was never charged. 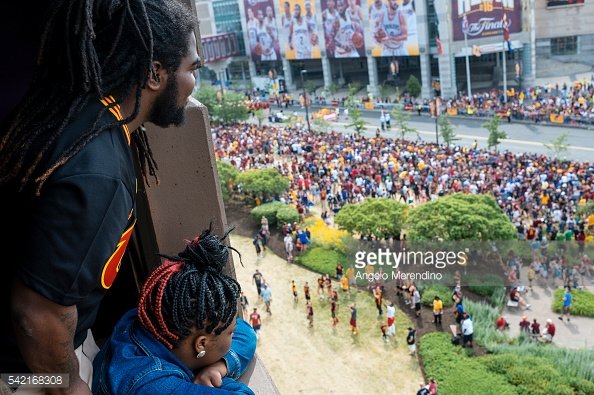 Who would not believe, in such a moment, that next the poor would be made middle class, the schools suddenly stocked with books, the mills re-opened. Even print media saw a resurgence! The Plain Dealer has reported printing an extra 500,000 copies of Monday’s commemorative issue of the paper — a truly startling number, particularly as they also revealed they usually print only 38,000 newspapers per day.

The only negative news I heard after the parade was that the planters and other niceties the city had put out to prepare for the RNC were trashed. The trickle of troubling news surrounding the RNC continued: protest areas so far from the action the ACLU sued, the FBI dropping in on local activists. And Thursday morning sunburnt hangovers reminded us that the  bulk of the economic benefit of this summer in Cleveland would go to one man: Dan Gilbert, the Cosimo de Medici of the Rust Belt. Gilbert owns both the Cavaliers and Quicken Loans Arena, is buying up a scary percentage of both Detroit and Cleveland’s downtowns, and is — in a city stocked with abandoned houses leftover from the recession — again offering no money down mortgages.

Nobody knows what the reported 15,000 journalists will be writing during the RNC — this election will surely have some twists yet — assuming publications can find digs cheap enough for their dwindling budgets. It is all so unprecedented: a struggling city suddenly stripped of its comfortable “works hard but always fails” narrative hosting a usually pro forma event now hijacked by larger historical forces of disenfranchisement and bigotry. On any given Sunday indeed. 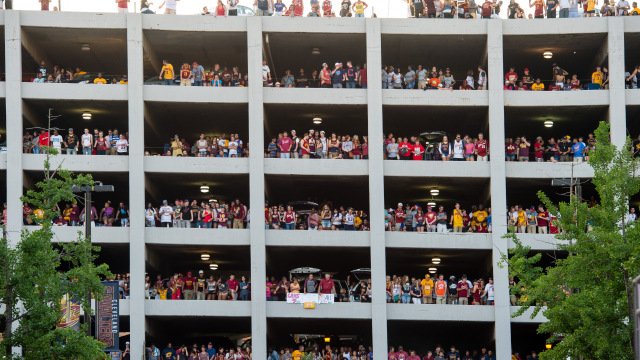 Cleveland is the buckle of the Rust Belt, tying together several states that pundits say are key to any possible Trump win. The Rust Belt is where Trump’s hopes lie, because here lies so much rage, so many white working-class men filled with class resentment, a resentment as strong and deep as is their sports fanaticism. These are the men whose are truly happier and more content now that the Cavs have won. They will be kinder and more optimistic: their identification with their sports teams is integral to their sense of self, and now they are winners. These are men who do not live in the city (where there were very few Trump votes in the primary), but who woke up at 5:00 am in their exurbs so they could drive to the parking lot to take public transportation to the parade. These are, they now are suddenly saying — lots of suddenly’s this week — the Rust Belt equivalent of Leave voters, variously described as the “whiter, less educated residents of post-industrial areas” or the ‘real, authentic, ordinary people.’

So soon we will see how the California GOP delegation likes the Kalahari Water Park, what the activists will do in the shadows of the Q, and if the city can find taxpayer money for more planters. But no matter how many hours of cable television Clevelanders watch in July, or who is crowned the winner, nothing will replace the image of the king, the black son of a single mother, scrappy and hungry, floating down the street, trumping Dan Gilbert’s Q, arms spread wide, claiming dominion.

___
Anne Trubek is the founder and publisher of Belt.