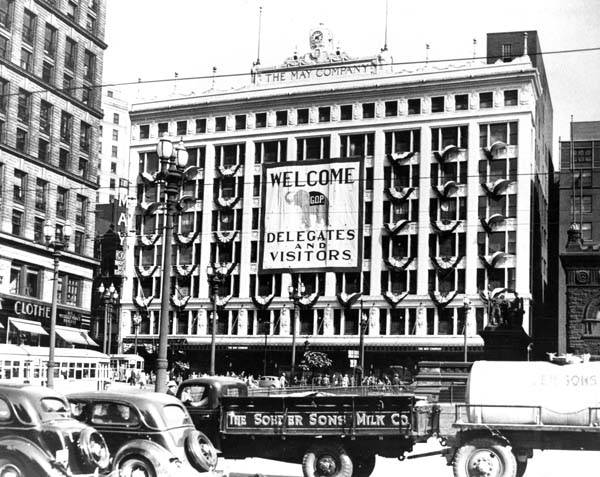 The city of Cleveland is looking for a party in 2016.

Officials hope to show off the city’s renaissance, which has been going on apparently since they built the Rock ‘n’ Roll Hall of Fame and the new stadiums 20 years ago. And what better way to do so than with a national politician convention?

The city is courting the Democrats and the Republicans. It’s hard to believe, but Northeastern Ohio, a Democratic stronghold, has never hosted a Democratic National Convention—and if right-to-work legislation passes, Ohio might end up off the list for the Democrats.

Although Dallas and Denver are rumored to be the frontrunners, Cleveland remains one of four finalists to host the Republican National Convention in 2016, along with Dallas, Kansas City and Denver (update: Cleveland was chosen). Ohio remains a huge prize for Republicans, who typically win the Oval Office if they win Ohio.

The last time the GOP convened in Cleveland, they were challenging popular Democratic incumbent Franklin D. Roosevelt. The Republican National Convention held from June 9-12, 1936 was the second political convention that year in Cleveland, as the Socialist Party nominated Norman Thomas as their candidate for president in May. The convention was really a warm-up act for an even bigger event opening later that month. The Great Lakes Exposition, Cleveland’s take on a world fair, sprawled along the lakefront in an area from just east of the still-new Municipal Stadium to East 20th Street. The 130-acre fairgrounds were built up at breakneck speed, in less than 90 days, creating work for the unemployed and boosting the city’s morale as the Great Depression lingered.

Thousands of people were expected downtown for the GOP convention. Local businessmen put up $130,000 for expenses for the convention, including renovations to allow for radio broadcasts from Public Hall. But conspicuous in his absence from Cleveland was Alf Landon, the Kansas governor who was expected to be named the nominee. 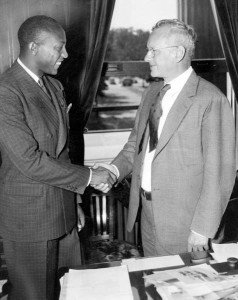 Landon was born in what is now considered the Youngstown metropolitan area, just over the state line in West Middlesex, Pa., in the area’s pre-industrial days in 1887. At the time, Western Pennsylvania was an oil-rich area, and Landon’s father was a prospector. The family moved west to drill for oil in Kansas, and Landon followed in his father’s footsteps, becoming a successful oilman. In 1912, Landon joined his first political campaign, supporting Theodore Roosevelt as a delegate to the Progressive Party convention.

Roosevelt’s Bull Moose insurgency split the Republican vote enough that Democrat Woodrow Wilson was elected. After Wilson served two terms, the 1920 election pitted two newspaper publishers against each other, in an era when newspaper publishers were a bit better off than today. Both were from Ohio—Republican Warren Harding was the publisher of the Marion Star, and James Cox was publisher of the Dayton Daily News. Harding won on a pledge of a return to normalcy after World War I, and Republicans took control of Congress as well. Harding died in office in 1923, propelling Calvin Coolidge to the presidency. After finishing Harding’s term, Coolidge accepted the nomination of his party to run again in 1924 at the new Public Auditorium in Cleveland, which had opened two years earlier as the largest convention center in the country.

Republicans controlled Congress and the White House until 1932, when New York’s Franklin Roosevelt—who had been Cox’s running mate in 1920—swept into office along with a Democratic Congress in the pit of the Great Depression. Republican Herbert Hoover, who kept Europe and Russia from starving in the days after World War I, was voted out of office because he didn’t do enough in direct relief during the Depression.

Franklin Roosevelt, on the other hand, took sweeping action, instituting reforms and enacting public works programs on an unprecedented scale. He would be the standard-bearer for the Democrats in 1936—and an inviting target for the Republicans, who assailed him as a man with more oratory than intelligence, subverting the Constitution, usurping the role of Congress, and minimizing the authority of the Supreme Court. It’s almost comforting how some things never change.

Landon, as the only Republican governor re-elected nationwide in 1934, became the favorite for the presidential nomination in 1936 by default, propelled to national fame by anti-Roosevelt forces, specifically William Randolph Hearst and Col. Robert McCormick, two more powerful newspaper publishers. Landon was not a particularly inspirational candidate, but legendary writer H.L. Mencken believed in 1935 that “it will be possible to beat Roosevelt in 1936 with a Chinaman.” Mencken was politically incorrect in two senses.

Landon campaigned minimally in 1936, but was regarded as the presumptive nominee as the convention loomed. “That he is to win it continues to be the best guess of the well-informed,” the Plain Dealer wrote on June 2. “There is enough uncertainty, however, to keep interest at a high pitch.”

The Plain Dealer might have pitched uncertainty, but convention organizers, sympathetic to Landon, were less unsure. They canceled a potential rally at Municipal Stadium because they viewed Landon’s nomination as inevitable–and the candidate remained in Topeka.

One wag, alluding to Roosevelt’s public works projects, said the Republican convention “represents the only large group of registered voters in the country not shifting trees, resurfacing bathing beaches or building streamline dog houses on government money. And some of them seem a little resentful of the exclusion at that.”

Former president Herbert Hoover came to Cleveland as the Republican Party’s elder statesman—by default. He was the only Republican former president still alive in 1936. In fact, he was the only former president alive, from any party. There was some thought that Hoover would rally anti-Landon forces, and that he himself might become the nominee. Hoover had previously referred to Landon as wishy-washy. But those fears were put to rest after Hoover’s speech on June 10, in which he supported Landon, and called on Republicans to fight the New Deal, saying that the president engaged in class warfare, and Roosevelt’s programs would mean the end of democracy. Landon actually did support significant parts of the New Deal, but Hoover was throwing red meat to the faithful

By a quirk of fate, Franklin Roosevelt’s son James was in Cleveland, in a 10-minute layover from Chicago to New York. He said he wanted to listen to Hoover’s speech, but wasn’t allowed to on the pilot’s radio. “I believe you can say he’s not worried,” he said of his father, who was in Arkansas at the time.

As boisterous as the hall was for Hoover’s speech, it shook a day later when Landon was named the Republican nominee on the first ballot, along with Frank Knox—another newspaper publisher—as the nominee for vice president.

That day, Landon “electrified the convention by a telegram,” accepting the nomination. But as the summer turned to fall, prevailing wisdom held that Landon had no chance. Mencken had changed his tune, believing Landon would lose by 2 million votes. But the Literary Digest forecast a decisive victory for Landon in the fall election, saying that Roosevelt would carry the Democratic stronghold in the south, but Landon would win 34 of the 48 states. And Republicans did well in state elections in Maine, which were in September, giving the Literary Digest poll—which had accurately predicted every election since 1920—even more weight. Landon did carry Maine in the election, as well as Vermont. And that’s it. He received a total of eight electoral votes, with the remaining 523 going to Roosevelt. Mencken’s prediction of the margin of defeat turned out to be about 9 million votes shy.

Until Dwight D. Eisenhower left office in 1961, Herbert Hoover remained the only living Republican former president. By the time Ike retired, Hoover had repaired the damage done to his reputation by the Depression, and was recognized at every successive Republican convention until 1960. He lived to see Barry Goldwater receive the nomination in 1964, but died before the election.

Alf Landon never rose to the level of elder statesman, but he didn’t seek the role either, finishing his term as governor and never running for office again. He broke with Republicans, supporting intervention in World War II later in the decade, and advocating for Lyndon Johnson’s Great Society in the 1960s. On September 9, 1987, Alf Landon celebrated his 100th birthday. He had lived long enough to be visited personally by President Ronald Reagan—a man who said the New Deal was based in fascism and Medicare was creeping socialism. Reagan had carried 49 states in his victory in 1984 over Walter Mondale, but Mondale won 13 electoral votes, four more than Alf Landon. Landon died a month after Reagan’s visit.

Photos via the Cleveland Memory Project.