My trip down Lee Road started at the Fairfax School’s Grandparents Day. I told everybody my grandchild was “Jim,” as in gym. I watched my wife, Alice, a phys-ed teacher, lead a class. She wore a mic like Madonna. Alice is not a roll-out-the-ball gym teacher.

I walked by the Lee Road library and wondered if I should submit an application to the board of trustees. I had already written the application, but I worried it might be too flippant, so I hadn’t submitted it. I had used the word “libe” in the application, and written a couple sentences in Spanish. There are few Hispanics around here.

Classical music blared outside the Subway at Lee and Meadowbrook. Must have been a crowd-control thing.

At the Lusty Wrench, Sam Bell, the mechanic, told me he drives less than 1,000 miles a year.

“When did you start hating cars? Must have been after you opened this place.”

Sam said he used to like cars; he says he once drove 160 mph all the way from Baltimore to Chicago in college. Sam likes the idea of cars, but not the actual cars.

Tim Burdick, a woodwind repairman, works next door to the Lusty Wrench. Tim had a $350 mouthpiece lying around.

“It’s similar to Frank’s,” Tim said, as in Franklin Cohen’s. Cohen is the principal clarinetist of the Cleveland Orchestra.

I tried the extra mouthpiece and ran it by some guys in my klezmer band. They couldn’t hear the difference. My band’s keyboardist said I wasn’t in control with Frank’s mouthpiece.

Tim has always liked my Martin tenor sax, particularly the octave mechanism. “So simple,” he says every time I bring the Martin in.

I planned to meet Carlo Wolff for dinner at Marotta’s on Lee. Carlo is a jazz critic, and now a reporter for the Cleveland Jewish News. I wonder how Carlo is fitting in at the CJN; he’s Jewish but “not very Jewish,” he told me.

I do a lot on Lee. Not everything, but a lot.

The epicenter? The Stone Oven. Yes, I go there; it’s my obligation as a baby boomer. It seems everybody in the Stone Oven is between 50 and 70 years old. On one visit, I sat next to Ray Lesser, the editor of the Funny Times. He had just turned down some of my so-called funny stories. I didn’t bring that up. I took the high road! We talked about his son Ari, the Orthodox Jewish rapper. That worked out; I wound up playing Ari’s wedding.

Carl Goldstein—a fellow landlord—goes to the Stone Oven every morning. In 2010 I told him I would start hanging out there every morning with him, but I haven’t. Every morning? I’m just not that social.

Mr. Lee of “Lee Road” was a farmer. I learned that on a historic walking tour. Other local farmers included Silsby, Taylor, and Dille. My Lee Road history: The first time I saw a live band was at the Stardust Ballroom, which was in back of the Cedar Lee Theatre on Lee. I was in junior high, at a bar mitzvah party, and the bandleader was Morry Seaman, the Jewish bandleader/saxophonist of the 1960s. Maybe he was playing “Stardust” at the Stardust. I don’t remember. 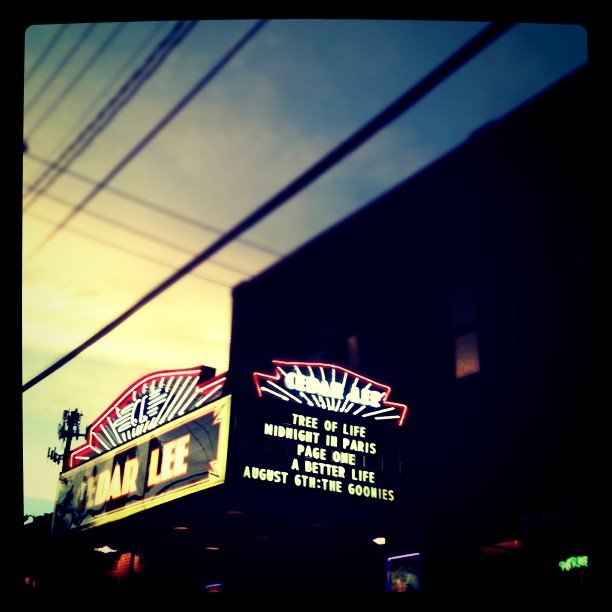 Cleveland Heights High grads like to reminisce about the Cedar-Lee neighborhood. That’s their nexus: the Cedar Lee Theatre and what used to be around there … Mawby’s, Meyer Miller shoe store, Earth by April. A Heights grad once told me he learned almost everything in life by selling shoes at Meyer Miller as a teenager. Meyer Miller’s co-owner was Cuppy Kohn. There was a pool hall next to the Cedar Lee Theatre: Wally’s.

At the Cleveland Jewish News, there was a freelance writer, Sid Abrams, who often wrote about Coney Island, Brooklyn. That’s where he and the CJN editor had grown up. I bet two people in Cleveland read those articles: Sid and the editor.

A couple years ago, a Beachwood High boy regularly dropped by my band’s rehearsals to jam. I knew him from temple, encouraged him to play, and liked to spout off advice about “real life” around him. I was his version of a worldly old bluesman, except Jewish. For instance, I told him to check out Brennan’s Colony on Lee. Brennan’s is the Catholic take on Corky & Lenny’s. Brennan’s is a major ethnic hangout, home-away-from-home for Church of the Gesu families, serving up quality fish, fries and beer.

Stand on the glass-enclosed Heights Library bridge spanning Lee Road, and you’ll see a fair amount of life pass underneath. Nothing momentous—no moving vans or rock-star buses, like at the New York Thruway overpass, Angola—but give Lee Road some leeway; it’s a major thoroughfare.