Why I Left Los Angeles For This

“But … why?” she asks me in equal parts disgust and curiosity. Her words linger between us, like a sour stench waiting to dissipate up into the air and away from where we stand, locked in unlikely confrontation.

I follow her gaze through the store window toward the graying skies that threaten precipitation at any moment. Tree branches lash violently and a woman outside draws up her hood to defend against the cold, windy Cleveland day. She safely reaches the store and waits patiently as the glass doors slide open, allowing us a preview of the storm brewing ominously outside.

The cashier looks back at me expectantly.

“Why would you leave Los Angeles for this?” And now her eyes penetrate mine, expecting a satisfying response. She holds my California driver’s license and credit card as ransom for words I have yet to speak.

It’s a fair question and one I had posed to myself over the last six months as I pondered the cross-country move. Was I ready? Was it right? Was there anything left for me in the city I had taken leave of five years ago?

The city has changed since I left. While Playhouse Square has always been a vital and vibrant draw, this year’s unveiling of the outdoor chandelier sparkling high above Euclid Avenue was a milestone. The 9, a luxury apartment complex, recently opened in the old Ameritrust building. And the hottest new bar? The Vault, aptly named for its location in the former bank.

Upon my return, I was told that Cleveland has become quite the “foodie” city – a term I still can’t wholly integrate into my every day vernacular. But it’s true. From the suburbs, to Ohio City and Tremont, to Little Italy, to downtown, names like Douglas Katz, Zack Bruell, Steve Schimoler, and, of course, Iron Chef winner Michael Symon are helming restaurants to rival those in New York, or our neighbor Chicago.

So Cleveland has updated its look. The food has star power. Our sports teams do well. But who is returning for all of this? According to Forbes Magazine, over $3.5 billion has been invested in an attempt to lure residents back – and it has worked. Since 1990, the population of downtown Cleveland has nearly doubled. We can thank world-class healthcare, the Cleveland Clinic and University Hospitals, in part for that. And where there is business, there’s a need for investment bankers, advertising, management, as well as hourly workers manning the counters, parking attendants, and vendors. In short, a little bit of something for everyone.

According to the census bureau, in 2013, Cleveland was home to just over 390,000 people, the majority of whom are Caucasian or African-American. Most had a high school education, at the minimum. The average household income was about $26,000 and our poverty level was at 34.2%. Despite our shiny new veneer, it seems we still have a ways to go. But the people moving back, most of who are college educated and in their late 20s or early 30s, intend to play a role.

Elizabeth Falco, for example, came back to Cleveland in January 2014 after 13 years away. Most recently, she attended grad school in Barcelona: exotic, intriguing, foreign in every sense of the word, but not home. While she enjoyed her time in Europe and certainly learned a lot, when it came down to it, the draw of being close to family, career opportunities, and the chance to be involved in the community proved quite strong. Through various conversations, she has expressed her excitement to be a part of Cleveland’s growing presence.

That’s not to say it has been seamless. It hasn’t. True, she was lucky to return to work for the Cleveland contingency of the Washington D.C. finance company she worked for before grad school, but things do change.

“There were a number of people from high school and family friends, but I have certainly put in a great effort to expand my network and connect with a variety of different people,” she says. “You have to take ownership and reach out to folks and raise your hand if you want to participate. It is easy to engage in a number of different professional, social, community, or civic activities, but you have to put forth the effort to get involved.”

When asked if she would consider leaving Cleveland for a larger city, Falco quickly replied that Cleveland is the place for her, both professionally and personally. An honest cheerleader for the city, she’s confident that the move back was a move forward. 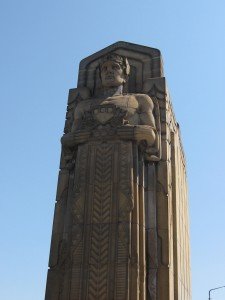 In contrast, Brian Innenberg, 26, has had a different experience. Brian accepted the position of Regional Director for BBYO and returned to Cleveland over the summer. When I asked him about living in our hometown as an adult, he was less enthusiastic. Though he says he loves Cleveland and is happy to be here, he also admitted that he was interviewing for the same position in Richmond, Virginia, where he was working in finance before his move.

Knowing he wanted a different career path was clear. Choosing a city? Not so much. He acknowledges that having family here is a big draw; the Cavs are another. Most of his close friends don’t live in Cleveland, though, making the decision more of a challenge.

“I know a lot of people here, but finding my group has been difficult. I work a lot and haven’t had the time to devote to getting involved as much as I’d like.”

While he understands he must put forth the effort, when pressed, he expressed dismay at not living in a community where he could easily walk to restaurants and bars. Downtown was a bit pricey and he found Coventry and Little Italy to be a bit underwhelming. Finally, he and his roommate decided on Lyndhurst, which is not known for being the hotbed of nightlife activity, but is close to work.

“Besides,” he says with a shrug, “If I want to go downtown, I can always Uber.”

Everyone seems to have his own reason for coming back. Perhaps it’s not as uniform as I had thought. And thus, the original question beckons once more to be answered, but this time wholly and truthfully.

Why would you leave Los Angeles for this?

Maybe the better question is: why did I leave Cleveland to begin with? Five years ago I needed a change of pace or, more accurately, an adventure. I had gone to Boston University for college and studied abroad in London, but I had moved back to Cleveland upon graduation. I had gotten a job in advertising and immediately and happily fell into a new, adult routine in the city that had raised me.

But in 2009, it was time for something new. I picked up and moved to Madrid, choosing to travel and allowing my savings to dwindle while banking memories to last a lifetime. I returned to the States in 2010 and decided I was finally ready to move to Los Angeles in pursuit of my lifelong passion: acting.

But, over time, acting gave way to writing and I found myself discovering a new passion: one less rooted in one place and more so in experiences. Add to that the growing number of friends returning to my hometown and the pull of family, and I was sold. I packed up my west coast life after almost four and a half years and shipped it all across the country in anticipation of the next chapter. I clicked my heels three times, closed my eyes, and wished for the best. The plane took off and before I knew it, at age 31, I was thrust back into Midwestern living, different than it had been after college. An adjustment from grand adventure and the bigger cities I had lived in, but one I am happy to be making slowly but surely, though perhaps with more effort than I had anticipated.

Yes, the weather can be challenging. There is far less glamour and hardly any red carpet events. But, I saw Danny Ferry once at the mall and Mike Tyson at a restaurant. You can’t tell me there aren’t any celebrities.

Success isn’t always measured in money and Cleveland knows it. We band together in defense of our city and always have. That unwavering pride and devotion are the motivation moving us all forward. Jobs are starting to blossom, downtown is making a comeback. We have one of the premiere hospitals in the world. And the Browns are doing alright this year. Miracles occur.

As for me, I’m still not sure. I love being back, but it’s hard to judge these things in only a few weeks. I haven’t settled on a job or a place to live, still grilling friends and family on the pros and cons of east side, west side, or downtown. The honeymoon period thus far retains its rosy glow and I revel in it. I know this place is good for me and I can be good for it, once I figure out how we fit together five years after our sudden breakup. There are fences to be mended and we’ve both changed so much. It’s going to take some adjustment and I’m sure we’ll face our fair share of challenges, but I think we’re going to be just fine, Cleveland and me.

As I gathered up my purchases and safely tucked my California license and credit card in my wallet, I looked at the cashier.

“Why leave Los Angeles for this? Well that’s very simple. This is home.”

Rachel Zake is a writer/actor who recently relocated from Los Angeles to Cleveland, her hometown.  Her anthology, Two People are Coming out of a Building, was published in September 2014 and can be found on Amazon and in local Cleveland bookstores.