The Legend of Baby Huey

After fifty years and hundreds of hip hop samples, the iconic Chicago musician’s only record remains urgent and imperative listening


The photograph is of a man on stage with his back to the audience. He’s a large man, barefoot, shirtless beneath a huge silver cross resting on the chest of his denim overalls. He’s standing in front of a band with his arms half-raised in a conductor’s pose, summoning his players to go farther and farther out.

It was taken in the spring of 1970, and the man is James T. Ramey, better known by his stage name, Baby Huey. He is performing with his band The Babysitters at the Sound Storm Festival. On the same stage, later that weekend, Luther Allison will play, Ken Kesey will read, and the Grateful Dead will stretch out for hours in front of more than thirty thousand people in an open field in the middle of Wisconsin.

Within six months of this photo, Baby Huey, who performed with the presence of Otis Redding, the movement of James Brown, and the balladeering of Sam Cooke, would be dead at the age of twenty-six.

A few months after his passing, a record would be released: The Baby Huey Story: The Living Legend. Now, a half century later, the legend of Baby Huey lives on as the story of an iconic Chicago musician and the only record that bears his name.

James Ramey hailed from Richmond, Indiana, a place he would later describe in what is probably his most famous recording, a cover of Sam Cooke’s “A Change Is Gonna Come,” like this: “I come from back, way back in Indiana / where, like, we still got outhouses / and brothers wearing pointed-toe shoes and carryin’ .45s.”

He began singing in the high school choir and at his family’s church. Eventually, in the early 1960s, Ramey, along with Melvyn “Deacon” Jones and Johnny Ross, formed what would later become the Babysitters. The band played around the region relentlessly before relocating to Chicago, where they would often play three shows a night at various venues around town. They would start the night at high school dances, then move to teen hangouts and ballrooms, and wind up playing at bars and clubs until the early hours of the morning.

Legendary Chicago musician and record producer Lincoln T. Beauchamp, better known as Chicago Beau, watched Baby Huey and The Babysitters perform in and around Chicago early in their career.  “I basically was a teenager when he was doing his thing, and Baby Huey was quite popular. His audience was really kind of diverse,” Beauchamp told me. “They had a following around the University of Chicago area. They had a whole kind of a music scene going on in Hyde Park, and the northside of Chicago in Old Town.” 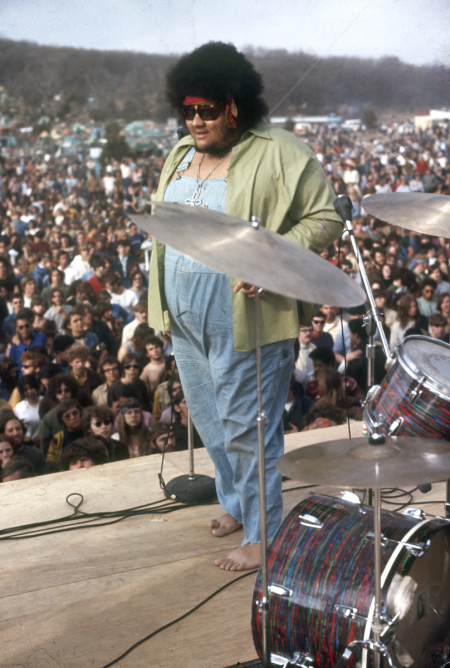 The group eventually filled into a full ten-piece band, full of punching horns, a wailing organ, a conga player, and Baby Huey holding forth in front and above it all. The band’s sound and visuals took some cues from Sly and the Family Stone, but Baby Huey and the Babysitters were a psych-soul-rock band that were equally adept at covering a Beatles tune and James Brown’s “There Was A Time.” And people began noticing. They toured the country, found coverage in Rolling Stone, performed on the The Merv Griffin Show, and were flown by the Rothschild family to Paris to play at a debutante ball.

Their performances in Chicago, particularly at the club the Thumbs Up, gained them a certain reputation across the city, which eventually gathered the attention of singer and producer Donny Hathaway, and, through him, Curtis Mayfield. Mayfield signed the band to his own record label, Curtom Records, and began the work of producing an album.

The Babysitters’ lineup started shifting around this time, and Baby Huey brought in new members to the group, including bassist Danny Alfano. Alfano describes Ramey as “like the Pied Piper.” “One time, on New Year’s Eve, we were working at Barnaby’s in Chicago over by Rush Street, and the band was kicking. I think it was ‘A Change Is Gonna Come,’ in fact,” Alfano remembers. “I mean, he was driving the band to the point of… it was like a climax. It was just incredible. And somebody said Baby Huey was hitting his head against the wall.” Another time, they were playing a debutante ball in Louisville, Kentucky. “Everybody was dressed in their prom dresses and tuxedos, and [Ramey]  just jumped into the pool,” Alfano remembers. “Everybody followed him in.”

Saxophone and flute player Bobby Baker joined the Babysitters in the fall of 1969. He remembers Ramey as “a really aristocratic kind of person.” “He was very bright. He sensed the times, and I guess he was a very pained person.” Baker remembers the group playing at the Rush Up on December 4, 1969, the night after Chairman Fred Hampton was assassinated by the Chicago Police Department and the FBI. “It was a very solemn night. We were upstairs and the gig was starting and Ramey had us walk downstairs playing our instruments,” Baker said. “It was like a funeral dirge.”

Throughout the last years of his life, Ramey began fighting a heroin addiction. Alfano remembers that in October of 1970, the band was travelling back to Chicago to finish recording with Hathaway and Mayfield. Both Janis Joplin and Jimi Hendrix had just passed from drug overdoses. “We were coming back from a gig somewhere out west,” Alfano said, “and I remember he was reading the article about Janis Joplin and Jimi Hendrix. He read the article a number of times.”

On October 28, 1970, Ramey was found dead of a drug-related heart attack in a hotel room on Chicago’s south side. Danny Alfano was a part of the group who went to identify the body. “I beat myself in the head every day about it. Maybe we could have done something. I just wish I would have had the sense to tell Ramey to straighten up or whatever,” Alfano saids. “I would’ve liked to handcuff myself to him, you know? He was destined, I think, to be a lot bigger.”

Turk Littles, who played trumpet and arranged the music for the Babysitters, said, “Baby’s last day on this earth preceded the day of his scheduled studio recording.”At one of his last live performances, Littles said,  “Baby sang ‘A Change Is Gonna Come’ three times in a row, and the audience gave witness to their appreciation.”

From the few recordings that Baby Huey and the Babysitters had completed with Donny Hathaway and Curtis Mayfield, Mayfield began assembling a full-length album. He wound up with eight tracks: five feature Ramey singing, and three are instrumentals from the Babysitters and some of Curtom’s session musicians. Released in February of 1971, The Baby Huey Story: The Living Legend ushered in a host of seminal soul, R&B, and funk records released that year by Black musicians, including Marvin Gaye’s What’s Going On, Allen Toussaint’s Toussaint, Funkadelic’s Maggot Brain, and Sly and the Family Stone’s There’s A Riot Goin’ On.

Perhaps Baby Huey’s most profound immediate influence was on Mayfield’s own soundtrack album, Superfly, released the following year. Writer Aaron Cohen, author of Move On Up: Chicago Soul Music And Black Cultural Power, points at the latter’s lyrical content as suggestive of Baby Huey’s own tragic story. “The songs Curtis Mayfield wrote for Superfly have a very anti-drug message about the evils of drugs,” Cohen said. “I would assume that maybe Huey’s death was on Curtis Mayfield’s mind as he was writing songs about drug addiction.”

Cohen hears in Baby Huey’s vocal delivery and spoken word interludes hints of a musical and vocal approach that would become more refined in just a few years time. “I think Baby Huey had a very personal way of doing it in which there’s vulnerability,” Cohen said. “There’s nothing ironic at all in Baby Huey and the Babysitters. There’s no detachment. There’s no distance. I mean he’s unvarnished in how he feels. He is just delivering his thoughts, and you know, there’s no sense of hesitation, there’s no sense of detachment. He is there with the audience, he’s showing himself completely.”

Author and music critic Tom Moon, who included the record in his expansive text, 1,000 Recordings to Hear Before You Die, describes the album as “an underground but not really, hiding-in-plain-sight kind of record.” He sees it as a true document of the live sound of Chicago in the late 1960s. “This kind of live playing group was kind of taken for granted at that time. In Chicago at that time, all the Chess guys were still active, Buddy Guy was on the ascend, so this was a place where you had to bring it,” Moon told me. “This was like the vernacular of that place and that time, and I feel like that context is almost more important than what happened to it.”

When he says “what happened to it,” Moon is referring to the record’s influence on the development of rap and hip hop, becoming a foundational sonic text for decades of rappers and musicians to sample from. To date, portions of the songs “Hard Times” and “Listen To Me” have been sampled at least a hundred times by artists such as Eric B. & Rakim, A Tribe Called Quest, Ice Cube, Wu-Tang Clan, and The Game. “Hard Times” was also covered by John Legend & The Roots in 2010 for their album Wake Up!, and it was recently featured in last year’s Netflix documentary, Fear City: New York vs. The Mafia.

But the depth of Baby Huey’s influence–of the influence of his only record–can’t merely be quantified by the number of cover songs and hip hop samples it has produced. Rather, it’s become woven inextricably into the very fabric of popular music. While Tom Moon was doing research for his book, he turned to several “MVP’s” that he could rely on for leads on essential recordings. One of them was Questlove. “I sat down with Questlove one day,” Moon said. “We were just listening to records in his studio in Philadelphia, and he said, ‘You know about the Baby Huey, right?’”

Baby Huey’s remaining bandmates still view the record as an incomplete document. Turk Littles said that despite his rapturing stage performances and persona, Ramey was still self-conscious about having his voice recorded. “The Babysitters pushed hard to help Baby’s confidence,” he said. “I personally find it sad and very disappointing that we did not find or exhibit a greater atmosphere for Baby’s album. He was given so little in turn for his giving so much.”

And yet, the record, in just five vocal tracks, captures Baby Huey as a powerful interpreter of the musical moment, delivering personalized visions of both popular and socially important songs with his own style of power and aching cultural commentary.

On his epic recording of “A Change Is Gonna Come,” Ramey said there were “three kinds of people in this world / that’s why I know a change has gotta come”:

“I say there’s white people /
there’s black people /
and then there’s my people /
…a change is gonna come.”

Baby Huey isn’t pleading for a change here: he’s demanding one, although he seems to already know it won’t arrive in time for him. But even so, Baby Huey and his record have always been able to find his people.

Let’s hope they always will. ■

Avery Gregurich is a writer living and working in Marengo, Iowa. He was raised next to the Mississippi River and has never strayed too far from it.