I grew up in a tiny rural township, ten minutes outside of Akron, Ohio in a neighborhood surrounded by looming second-growth hardwoods and whispering cornfields.

On summer nights, a mob of a dozen kids would rush outside after dinner to play the greatest game ever invented – flashlight tag. The game had it all – danger, romance, feats of athleticism, terror. In the quiet hour, waiting for the sky to darken enough to play, we would throw small rocks into the air and watch the bats swoop after them, mistaking them for insects.

We did this almost every night, a tight knit group of kids who would each fall away into adulthood, never to see each other again. We stood at the top of a cul-de-sac, an open circle ringed with maple trees and watched little bats silhouetted against the fading pink sunset.

Today those kids are pushing 40, and I’d bet every one of them occasionally thinks about those bats, and the colors of the Ohio sky at night.

When I moved back to the area to raise my own kids, I expected to see the bats, to show my boys something exciting I remembered from my childhood. In the three summers I’ve lived here, I’ve seen fewer bats than I can count on one hand. It is as if I had turned my back for a moment, and now they are gone. Bat populations across the eastern U.S. are imploding.

From the U.S. Fish and Wildlife Service:

White-nose syndrome (WNS) is a disease affecting hibernating bats. Named for a white fungus that appears on the muzzle and other parts of bats, WNS is associated with extensive mortality of these animals in eastern North America. First documented in New York in the winter of 2006-2007, WNS has spread rapidly across the eastern and midwestern United States and eastern Canada.

WNS has killed around 6 million bats in North America. In some areas, 90 to 100 percent of the bat population has died.

Tim Krynak, Natural Resources Project Manager for Cleveland Metroparks, has studied Ohio’s bats for two decades. He’s our region’s foremost authority on WNS, and his outlook for our populations is grim.

Krynak appeared at the Cleveland Museum of Natural History’s Conservation Symposium in September 2014, with a presentation titled “Are Ohio Bats Only a Wing Beat Away From Extinction?”

It’s not just that the bats are dying. They are dying horribly.

Krynak’s presentation opens with a close up of a Northern Long-eared Bat, its little nose stuffed with cottony fungus.

The fungus, recently renamed Pseudogymnoascus destructans, is believed to be a European invasive species, introduced to North America by globe-hopping cave enthusiasts at Howe Caverns, a tourist destination near Albany, New York.

Magnified photos of bat skin affected by the fungus look like something out of a horror movie. A hooked spore spreads the fungus, which digests, erodes, and irritates the skin of hibernating bats

“It disrupts the flow of fluids in the bats wings and other parts of its body,” Krynak said. “You’d try to open an infected bat’s wings and it was like dried out paper. They are dehydrated.

[blocktext align=”right”]It’s not just that the bats are dying. They are dying horribly.[/blocktext] “The irritation causes the bats to wake up for grooming in the middle of their winter hibernation. It’s like having athlete’s foot – hot, itchy, and uncomfortable. Halfway through the winter the bats’ fat reserves are gone. They can stay in the cave and die, or leave the cave and die.”

According to Krynak, the fungus doesn’t affect other animals, and twelve species of bats are surviving the disease in Europe. “We’re either seeing post white-nose infection population in Europe, or the bats co-evolved with it.”

Those stable European populations are basically the only ray of hope.

Bats give birth to one pup a year, and they have a high mortality rate. No more than 50 percent of the offspring survive. At the lower end of the survival rate (35%), affected bat species won’t be able to recover.

“The optimistic projections are what we’re hanging on to,” Krynak said. “Can the survivors produce enough young over time to bring back populations? Next year, we will know if we’re going to have a local extinctions of some species or not.” 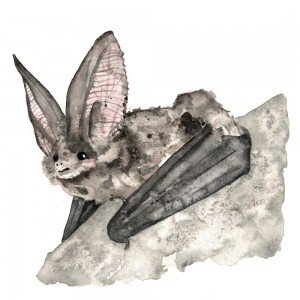 There are eleven bat species in Ohio. Of those, six species have been identified with symptoms of WNS: Big brown bat, Indiana Bat (on the Federal Endangered Species list), Little Brown Bat, Northern Long-eared Bat (proposed for listing, as of April 2015), Tri-colored Bat, and Eastern Small-footed Bat.

The other bat species are tree-roosting and migratory, flying south for the winter, and are less likely to develop WNS. Some species (Silver-haired Bat and Eastern Red Bat) have tested positive for the fungus, but cold hibernation conditions are required for the full blown infection.

The first infected hibernaculum in Ohio was identified in the winter of 2010-11, in an Ironton mine cavern in Lawrence County. The largest Ohio hibernaculum was infected the following year 2011-2012 in Preble County.

In just the few short years since those sites were identified as positive for WNS, bat populations have plummeted (by around 85 percent in the Preble County site, and 99 percent in Lawrence County).

Cleveland Metroparks has monitored a bat condo in North Chagrin Reservation since the start of the WNS epidemic. The North Chagrin population dropped from around 2,000 to 50 bats. That’s a decline of roughly 98 percent.

The decimation is staggering.

One of Northeast Ohio’s known hibernaculum is in Cuyahoga Valley National Park (CVNP), tucked away in the park’s iconic Sharon Conglomerate ledges.

Winter snaps shut like a steel trap. It is 16 degrees on an afternoon in mid-November. There’s not another car in the parking lot at the CVNP’s Ledges trailhead.

Hemlocks sway and groan in the strong wind, snow floats from the branches. The entrance to Ice Box Cave is quiet – the only muffled sound I hear is snow hitting the ground.

For the past several years, park staff has monitored Ice Box Cave for potential bat habitat and hibernacula. Four species of bats have been captured: Little Brown, Big Brown, Northern Long-eared, and Tri-color. Ice Box Cave is the only cave with hibernating bats within CVNP.

According to CVNP Biologist Meg Plona, Summit and Cuyahoga counties have tested positive for WNS, but the park has not sent a dead bat in to a wildlife lab to be confirmed positive.

[blocktext align=”right”]“For species on the wane, each autumn, perhaps, represents a step toward extinction.”[/blocktext]This crenellated block of sandstone is pockmarked and crusted with lichen and moss. If there are bats trapped inside with P. destructans, there is nothing anybody can do to protect them. Nothing but wait and hope they sleep tight through winter.

The NPS put up barriers in front of the cave entrance in 2012 to keep people out. My five-year-old could get past them. But there are huge risks to modifying cave structures.

In an attempt to stop the sometimes catastrophic declines, cave entrances were in many instances altered to restrict or limit human intrusion. Ironically, however, the results of these well-meaning measures were mixed; sometimes the population recovered, but in other cases improperly constructed gates resulted in the loss of entire colonies. For example, from in the early 1960s when entrance modifications were made, to the early 1990s the bat population of Hundred Dome Cave in Kentucky declined from 100,000 to 50 bats. The researchers ultimately concluded that the modifications of the cave entrances had the main effect of restricting airflow so that the temperatures inside had become higher. Those at Hundred Dome Cave had increased from 4-6° to 11°C. As a result, these hibernating bats, normally found in conditions of 4-8°C, were insufficiently cooled. The main danger to bats in their traditional caves is not quick freezing, but slowly starving to death in temperatures above 10°C when their elevated resting metabolism eventually exhausts their fat reserves by the end of the winter.

Violations of the cave closure are unfortunately still observed. CVNP is considering installing bat-friendly gates to permanently close Ice Box Cave to protect the hibernating bats. But even if the barrier worked, the disease is largely spread by the bats themselves.

All is quiet around the doorframe and lintel-shaped hole in the rock. The world lies frozen and still under the shadow of the forest canopy.

I’m reminded of a line from Donald Culross Peattie’s book, An Almanac for Moderns: “For species on the wane, each autumn, perhaps, represents a step toward extinction.”

There are slivers of hope. Krynak points to some populations stabilizing in New York and Vermont, and to advances in vaccine research and other treatments for WNS.

[blocktext align=”left”]Bats stand for something more than the ecological services they provide – they play this outsized role in our culture’s collective imagination.[/blocktext]But some things just can’t be fixed.

The U.S. Fish and Wildlife Service’s White-nose Syndrome Response site provides a page describing “What can you do to help” but it basically amounts to staying the hell out of caves, to watching the extinction happen.

This fungal pathogen is probably the most dramatic biological disaster of our lifetimes. Experts predict a 99 percent chance of regional extinctions of Little Brown and Indiana Bats. Millions of predators of night flying insects are already gone. Not only are we losing bats, but the future ecological fallout is unknowable.

The personal, spiritual loss might be worse. Bats stand for something more than the ecological services they provide – they play this outsized role in our culture’s collective imagination. The world will be a far less interesting place without them.

Dark air-life looping
Yet missing the pure loop …
A twitch, a twitter, an elastic shudder in flight
And serrated wings against the sky,
Like a glove, a black glove thrown up at the light,
And falling back.

Krynak has worked with bats for 20 years, so for him, the loss is personal.

“You can’t take common species for granted because things can happen overnight,” Krynak said. “Before WNS, if you told me in ten years I wouldn’t see any Little Brown Bats, I wouldn’t have believed you. It took four years.”

Matt Stansberry was born in Akron, Ohio. He is a dad, nature writer, and fly fisherman. Find him on Twitter @LakeErieFlyFsh. More of David Wilson’s illustration work can be found at dwillustration.com.