In Monroeville, a Living Museum

From inside, nothing can be seen. The stores are open, everything seems basically the same. Then there are groans and, after those, screams. A child runs behind a triangular tower of advertisements. A zombie follows. More screams.

Last July Monroeville Mall, one of the largest shopping complexes in Western Pennsylvania — and infamous for being the location of George A. Romero’s 1978 horror classic, Dawn of the Dead — discarded the last piece of its original 1969 interior: a small wooden footbridge that went over a fishpond, complete with tropical plants and rocks. By getting rid of this footbridge, the mall is now entirely unrecognizable from its Dead days; but film fans fought to make sure this piece of local history was not destroyed.

The film’s legacy of outlandish gore and its commentary on consumerism have stood the test of time. Many fans wish the facade of the mall could last so well, but the remodeling efforts moved forward. The only bright spot for fans was that, instead of merely throwing away the old bridge, it was ceremonially moved — by zombies — to the Heinz History Center in downtown Pittsburgh, a few minutes from the mall.

The celebration that Wednesday morning consisted of a couple dozen fans, mostly painted up as zombies, but also some old cast and crew from Dawn. Lukewarm coffee and freshly iced bottled waters were placed on a folding table. Aside from those children’s screams — mostly the kids of horror fans who probably didn’t know how deeply invested their parents were in this stuff — everything appeared normal. The corridor being used for the ceremony was at the corner of a J.C. Penney and a Party City, both of which have their own separate entrances outside, making it a mostly quiet hall that few people go down. A corridor on the other side of the mall, which has a mural of Pittsburgh history — including George Romero and some zombies from Dawn — would have felt more appropriate, but it typically has more traffic. A feeling embedded itself straight away that the mall just wanted this nonsense over and done with.

“Dawn of the Dead represents the past and shopping malls are eager to embrace the future in hopes that they will remain a part of it,” says Matthew Newton, author the upcoming book Shopping Mall, due out in 2017 from Bloomsbury

In July, the space where the footbridge was is empty. Nothing there but an odd sign reading WE’RE STILL HERE. Now, the space is filled with a cellphone stand. At first glance this may appear insulting, to replace a piece of local history and culture with, essentially, nothing. However, Newton says this is not unusual for the modern shopping environment.

“As malls become further removed from the civic gathering spaces they were once envisioned as, the management firms that run them are primarily concerned with transforming square footage into selling space rather than pandering to nostalgia. Which all boils down to a sadly realistic truth: a cellphone kiosk makes more money than a pond filled with koi fish, even if Romero’s zombies once shuffled around it.” 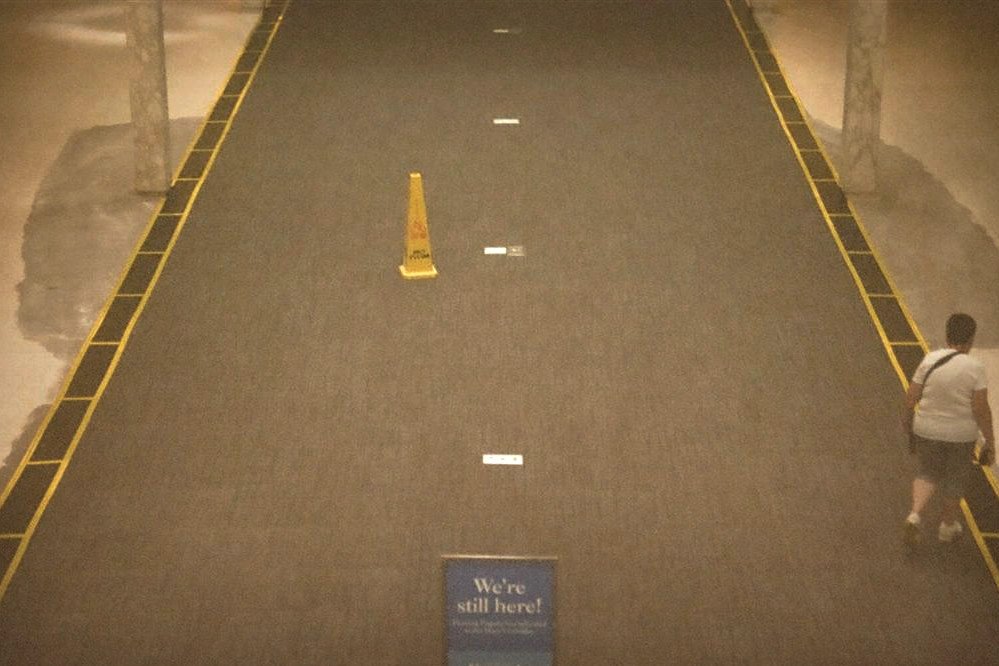 During the footbridge ceremony, a number of speakers shared their thoughts on Dawn of the Dead and its place in Pittsburgh history. First, a zombie took the lecturn — decorated with a brain and bloody human hand — groaning and screaming through gritted teeth for nearly ninety seconds. After he finished, someone else approached the mic. “And there you have it, folks! Another presidential candidate for the Republican party!” Then a spokesperson for the mall spoke for a few moments on how happy they were that the bridge was going someplace else, to be preserved.

It wasn’t until Kevin Kreiss stepped up that raw emotions showed themselves. Kreiss, the curator of the Living Dead museum in nearby Evans City — where the original Night of the Living Dead was filmed — spoke for several minutes about his fear that the footbridge would be lost to the ages. He wore mostly black, had unkempt hair, and appeared nervous. His speech was polite to mall management, but his many mentions of having to rally zombie fans in order to save the bridge hinted at a hostile subtext. Without his initial efforts to contact the Heinz History Center and petition that the bridge be maintained, it’s very likely it would have been torn down without any fanfare.

Time and again Kreiss reiterated the importance of the original mall, saying, “All of this pop culture came from one indie film in Pittsburgh.” And while his feelings on the bridge’s removal were fairly neutral at first, he boldly remarked, quickly and almost under his breath, that this last remnant of the original mall was “a casualty to progress.” 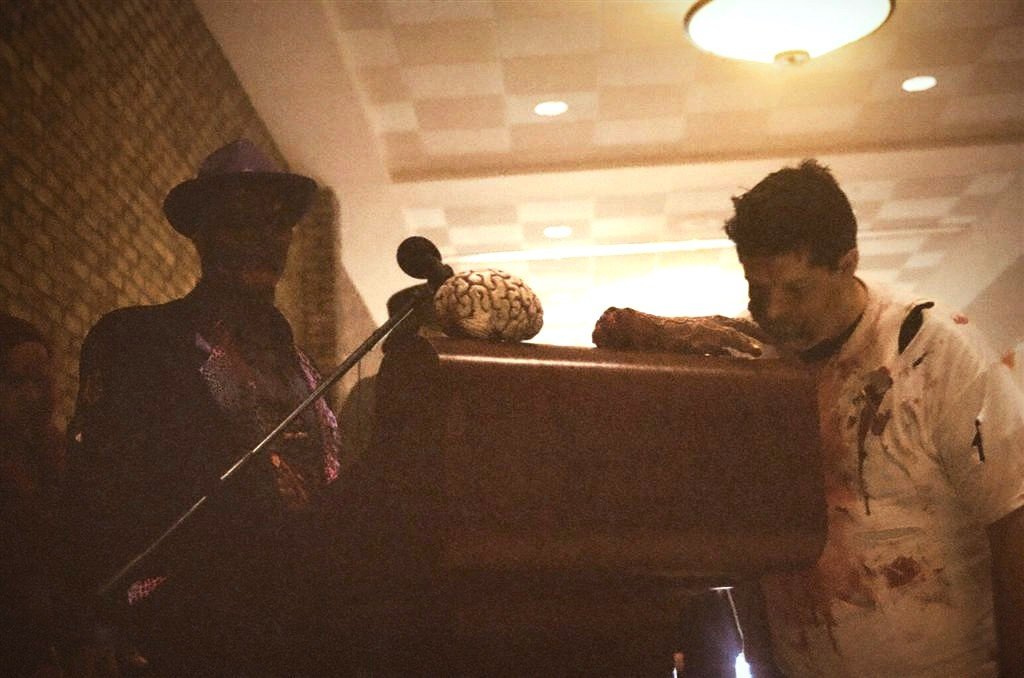 Progress. It’s a word that leaves a bitter taste in many Pittsburghers’ mouths because it has no certainty. Even the original proposal of the mall itself was questioned by residents in the 1960s; back then, Monroeville was primarily known for farming. However, after Interstate 376 was finished and the area became more heavily trafficked, the mall was a safer bet. The mills were going strong, and for a time the area was populated with dozens of stores and restaurants. But by the late 1970s Western Pennsylvania’s boomtime seemed to be ending and progress — this time closing mills and moving jobs elsewhere — destroyed entire ways of life in the Rust Belt, providing no immediate replacements.

So while the old footbridge was little-used, it meant something. Despite numerous signs advising not to, the pond was filled with pennies passersby would drop in because, maybe, they were wishing for something — or, more likely, it was just what they have always done. The bridge came from a no less certain, but more fondly remembered time; it served no real purpose, but it was familiar. Why have a party for something you’re willingly leaving behind? Why celebrate the history of a landmark while taking away its history? What kind of future is that?

“Lifelong residents of the city have a wary relationship with the future, and rightfully so,” says Newton. “For such a long time, Pittsburghers were told, after the collapse of Big Steel, that the city essentially had no future without industry, which is why so many people fled throughout the 1980s and 1990s. But there’s also long been a fascination with anything new…In the world of shopping malls, that is particularly true. New is always embraced over old, for better or worse.” 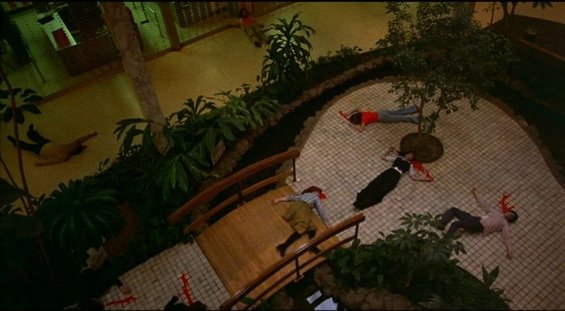 Impossible to say if Monroeville is better or worse for the mall. The myth of Dawn’s creation is that George Romero was friendly with the original owners, who took him on a tour and proudly bragged that someone could survive a nuclear threat within the structure. Romero quickly thought, What about a zombie threat? Since then, the mall has had its ups and downs and it’s difficult to pin its trajectory moving forward. Hard to say if it can survive itself. Some malls in the area — South Hills Village, Robinson, Ross Park — have tried turning themselves into high-wage yuppie zoos; others, like Century III Mall in West Mifflin, are one bad Black Friday from becoming a flea market. Still others are empty, or have been demolished in the last ten years.

Newton points to one of those more affluent establishments, Ross Park, as an example of what a successful mall in today’s age can be.

[blocktext align=”right”]Progress. It’s a word that leaves a bitter taste in many Pittsburghers’ mouths because it has no certainty.[/blocktext]“That mall boasts a Nordstrom, Tiffany & Co., and Louis Vuitton…it was recently announced that a Tesla showroom is in the works. If anything, the economic fate of malls is reflective, in many ways, of the communities where they are located.”

For Monroeville, a fairly middle-class town, nothing is assured. While the mall is faring better than many others, its customer base cannot financially compete with the richer neighborhoods. A wide-scale fight among teenagers in late 2014, as well as a shooting earlier this year, have left the management scrambling to recover stability. The mall’s newly-built multiplex, installed into the center of the building, provides grand spectacle on the cheap ($4 tickets on Tuesdays!) and hopes to draw new customers who, after a film, can exit directly toward the mall’s trendier stores.

All of this, along with the mall’s hesitant relationship to its zombie fan base, appears well-calculated for appeasing the everyday Pittsburgher. Keep as many people happy as possible and don’t rock the boat. It’s a difficult act that has yet to show its hand either way.

“If anything,” Newton adds, “the state of the shopping mall reflects the growing gulf between the rich and the poor, the comfortable and the distressed.”

The state of Monroeville isn’t set just yet. 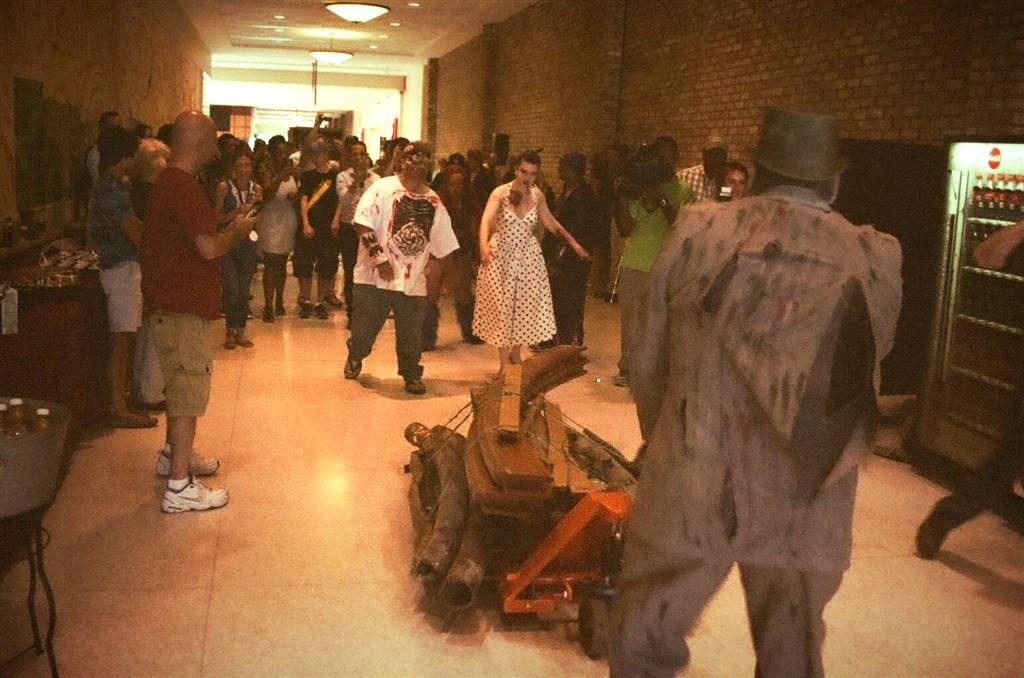 At the ceremony, Lenny Lies, who played “Machete Zombie” in Dawn of the Dead (he got one to the skull by Pittsburgh’s own makeup master, Tom Savini), took a religious approach to his speech on the footbridge, comparing it to an artifact from Vatican City and calling the mall a mecca for thousands of horror fans every year. “This is where you go to see a living museum,” he said, ending by proudly claiming that the footbridge’s importance would continue, even past its original location. “This is a candle that will never go out.”

Looking over the mall, that image endured. A nearly 50-year-old building continually remodeling itself but never looking particularly new. The day’s celebration ended with a horde of zombies packing the dismantled footbridge — little more than some random pipes and wooden beams piled onto a pallet jack — into a van to be moved to the Heinz History Center, where it will be part of a section of the center on local film history due to open in 2018.

TV cameras stuck around to watch the zombies haphazardly throw pieces of the bridge into the van; soft-news authors happily interviewed them and old Dawn of the Dead cast members. Everyone seemed happy to celebrate something, but it remained unclear exactly what. The phrase “things change” was muttered a few times.

Eventually the van drove away and people slowly dispersed, either to their cars or into the mall again. It was interesting, just after everything wrapped up, to consider the definition of undead:

Almost like a candle that, no matter how weak its flame, won’t go out.

Eric Boyd is the editor of The Pittsburgh Anthology, by Belt Publishing. He is currently working on his first short story collection, “Brownfields.” His writing has been published by The Offing magazine, Guernica, The Masters Review, PEN America Journal, and others, as well as in the anthologies Prison Noir (Akashic Books) and Words Without Walls (Trinity University Press). Boyd is a winner of Slice magazine’s Bridging the Gap award and the PEN Prison Writing award, as well as a semifinalist for the H.E. Francis award. His blog highlighting his daily six word stories/poems, as well as longer works. can be viewed here: EricBoydblog.tumblr.com.