The following is an excerpt from Where To?: A Hack Memoir by Dmitry Samarov:

NATO held its international meeting in Chicago a couple months before I decided to quit driving a cab in 2012. Mayor Emanuel turned the city into a militarized showplace for the visitors’ benefit. That and much of what else happened after my decision did nothing but strengthen my resolve to walk away. Sometimes the universe let’s you know not to let the door hit your ass on the way out. 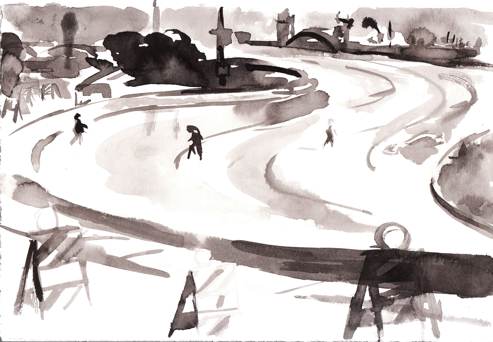 I pick up a well-heeled couple from the Chicago Brauhaus in Lincoln Square. The gent has an accent I can’t place, but it sounds the way rich people on TV sound. He wears a navy blue sport coat as naturally as I’d wear an old T-shirt. He’s well into his 60s; his companion is a few years younger and likely not the wife but probably an assistant or attaché of some sort. They’re charmed by Lincoln Square, calling it a “real” neighborhood repeatedly. They’re headed to the Hyatt McCormick Place so I take Lincoln south to Irving Park and turn east toward Lake Shore Drive.

Looking out the window the man remarks that Chicago is a city that’s alive. I can’t disagree with him. They tell me they’re here from NATO to get everything ready for the meeting at the end of the week. The woman assures me the coming inconveniences — road closures, heightened security, etc. — will be well worth it for our city in the long run. I don’t say anything to that. At the hotel I wish them well and watch as they stroll inside, looking like they own the place.

The nearly nonstop news reports about NATO remind me of the yearly Armageddon-type snowstorm predictions which hardly ever live up to the hype. Unlike the snowstorms that I always look forward to, in this case I truly hope the prognosticators are wrong. The last thing anyone needs is another ’68 Democratic National Convention around here.

A businessman in the Loop asks to go to Midway Airport. His secretary advised him not to return to Chicago until next week to avoid the hassles to come. We talk about the road closures. I reassure him that, indeed, Archer Avenue will take him all the way back to the Loop in case the Stevenson is closed to accommodate the security needs of the visiting dignitaries.

At Midway, there are more immediate conflicts. The gaunt man who washes windows in the taxi staging area throws down his Windex and newspapers and stalks away from a Carriage Cab SUV a couple rows down from me. I hear his angry voice directed at a driver who’s out of view. A bit later he climbs into the back seat of the Yellow next to mine. I see him telling the driver his story, his hands reinforcing his points. I can’t hear a thing through the two sets of car glass but it’s clear he’s explaining how he’s been wronged.

I start my day at Midway. The window washer walks past my cab offering his services and I shake my head no reflexively. A moment later I call him back and tell him to go ahead, if for no other reason than to hear about yesterday. I watch him work his way methodically from the front window clockwise. When he’s starting on the driver’s side, I get out and ask about what happened.

“Some people, they want somethin’ for nothin’, know what I’m sayin’? I knew when I was doing his windows that he was gonna try to get out of payin’ me. Some people are like that. I get done and he offers me a dollar. Believe that? So I throw my shit down and walk away. He’s lucky I’m not waiting at his house when he gets home. Should be thanking me I’m not one of those niggers sticking a gun in his face.”

Just then the Carriage SUV pulls up and its driver, a well-dressed round little man, jumps out and starts hollering in the window washer’s direction. “Look at this lazy liar! He won’t even do the inside! Don’t give him any money!”

The washer pays him no mind. He finishes his work and asks for three bucks. I give him ten and tell him to forget about that other guy. Some people just need something to be mad about. He nods, thanks me, and walks away down the row of cabs.

At the terminal, two Northwestern University students ask to go to O’Hare. They’ve missed their flight and the next one leaves from Chicago’s other airport. I tell them it’s a $65 fare. They act put out but after conferring for a second they get in.

I wonder whether they’re getting out of town to avoid NATO but it appears that they’re grappling with more important problems. One kid wears a ball cap with “drugs” printed off-center in lowercase letters on the front. He pops snack-size Kit Kats in his mouth until inadvertently smearing his pristine white V-neck T-shirt with one. “Goddamnit! This is the second one I’ve soiled today. This is the worst damn day of my life!”

His buddy struggles to book a flight on his smart phone, paying him little mind. “Dude, let’s make a pact not to mention the missed flight this weekend, cool?”

The Kit Kat kid agrees, then digs out two battery-powered propeller yarmulkes for them to put on. Soon they’re laughing, all the cares of the world forgotten. They talk about the big music festival they’re going to, about what they’ll wear and who they’ll party with. I’m pretty sure they’re going to see the Insane Clown Posse. 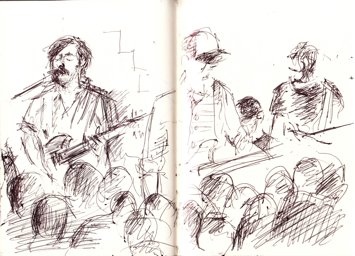 Before I drop them off at O’Hare, my friend Tim calls. His band, Joan of Arc, is playing at a protest in Grant Park Friday and he asks if I can pick up some of their equipment afterwards. The Park District isn’t letting them park a van anywhere near the Petrillo Bandshell. I tell him I’ll do it, then hang up to pay a toll on I-294.

Tim calls to say that he won’t need me, that the authorities have seen reason and are letting them load out. I’m glad for him but a bit disappointed not to be part of the action, however tangentially. A couple hours later it becomes a moot point because the city tells Tim that there will be no concert, or any other event at the band shell, that night. Everyone is confused and frustrated. A lot of people ran around, practiced, and planned for nothing.

The police presence is significant around town. Every highway ramp, as well as most downtown blocks, has cops in blue manning their positions. Off the main drags, unmarked white cargo vans full of more cops line up to prepare for the worst. The atmosphere is menacing. As afternoon turns to evening, law enforcement begins to outnumber civilians downtown. I only go near the Loop if taken there by a fare; better to stay in the neighborhoods and avoid the possibility of getting stuck. Everywhere else around town that I go, people get in the cab and ask apprehensively if I’ve been downtown and how bad is it? The populace has been properly spooked by the whole thing, that’s for sure.

On my way home at 4:00 a.m., I have to bypass shut on-ramps at Roosevelt and Canalport, finally getting on the Ryan at 31st Street.

Heading downtown around noon on a Saturday usually involves sitting in gridlock from Sox Park to the Loop on the Ryan. Not this day. With all the closed exits and dire warnings, the highway’s eerily clear, almost deserted.

I have an afternoon meeting in Ravenswood and, as I wait in a coffee shop doorway, a ragtag army marches east on Montrose toward the mayor’s house. A little boy asks his father what all those people are mad about and it’s interesting to hear the man finesse a measured explanation, masking his irritation at having their route home blocked.

Saturday’s my day to make the money that wasn’t made the rest of the week. So, whatever my views on the protests might be, the object is to avoid blocked roadways today and keep the wheels turning. Staying far away from McCormick Place Convention Center and the Loop does the trick. It looks like a lot of other Chicagoans had the same idea and stayed home on this day. 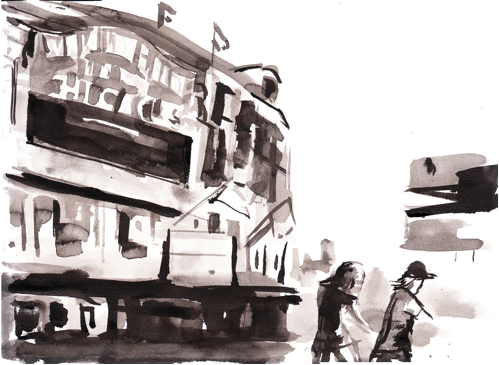 I don’t intend to work much, but can’t resist going down to Wrigley after the Sox sweep the Cubs in their weekend series. At Racine and Addison a man in a Cubs jersey and a woman in a Sox T-shirt ask to go to the West Side. The woman immediately asks my baseball allegiance, letting out a wild whoop when she hears the right answer. Her husband acts outraged and threatens to jump out of the taxi. They’re in good spirits and well lubricated after an afternoon in the ballpark. He shouts out the window, calling select passersby fag for wearing the wrong thing. She just laughs at him. He threatens to sic NATO on people for unspecified wrongs that they’ve done him. He rails against “the beaners” and insists he always sticks up for white people, that he likes them. They’re Mexican and perhaps this comedy routine is for my benefit but it’s hard to tell for sure.

We eventually escape the post-game traffic, and near Logan Square the woman remarks on how different it is around here than in Wrigleyville. Chicago’s full of different places, that’s one of the great things about it. She’s had it with the city, though, and she says they’re moving to the suburbs next week. I leave them to get tacos at a Mexican grocery store. She tells me for all his talk about loving everything white people do, he won’t ever eat their food. After driving a couple miles away, I notice the cell phone she left on the seat and double back. They’re not in the store but I remember the intersection they originally asked for and catch up to them.

“YOU THE MAN!” he screams in my face as I hand over the phone. “We were just having a big fight about her losing that thing. Thank you so much!”

Returning her phone is the high point of the week.

If the intent of the mayor was to showcase Chicago to the world while NATO was in town, I fail to see how the heavily guarded ghost town he presented could have impressed anyone.

—
Excerpted text and illustrations from Where To?: A Hack Memoir by Dmitry Samarov.

Where To?: A Hack Memoir is available for purchase via the following link: http://www.curbsidesplendor.com/books/where-to-a-hack-memoir