Madison, Indiana Wants to Be the Next ‘Music City’


It’s Thursday night, and I’m sitting in a barber shop in Madison, Indiana, population 11,967. I’m not here for a haircut. The tiny space is crammed with rows of chairs and people—maybe thirty of the latter—and the walls are filled with paintings by the owner, Jane Vonderheide, who is also an artist. Latecomers take a spot in an antique barber chair or stand and talk, sipping from flasks and wine glasses while they wait for the first act to take the makeshift stage.

Tonight, we’ll be hearing two singer/songwriters play an intimate, instrumental set á la NPR’s Tiny Desk Concert. Up first is Wonky Tonk, a petite young woman wearing a fur hunting cap and leggings with an American flag pattern. She usually plays as a duo or trio out of nearby Covington, Kentucky, and her sound’s been compared to Lucinda Williams or Iris Dement. But right now she’s just one woman with her electric guitar and about two feet of space between her and the audience. “I’ve never been to Madison,” Wonky Tonk says before she starts to play. “So I’m super duper, duper excited to be in this space and have y’all filling up this wonderful, wonderful room. I’m really excited about this existing.”

Welcome to the House of Jane Songwriter Sessions, just one of half a dozen options for live music on any given night in Madison, Indiana, a small town on the Ohio River, halfway between Louisville and Cincinnati. While it might be unusual to find a packed house for live music in a barber shop on a weekday night someplace else, that’s not the case in Madison, which has possibly the best per capita music scene in the country. 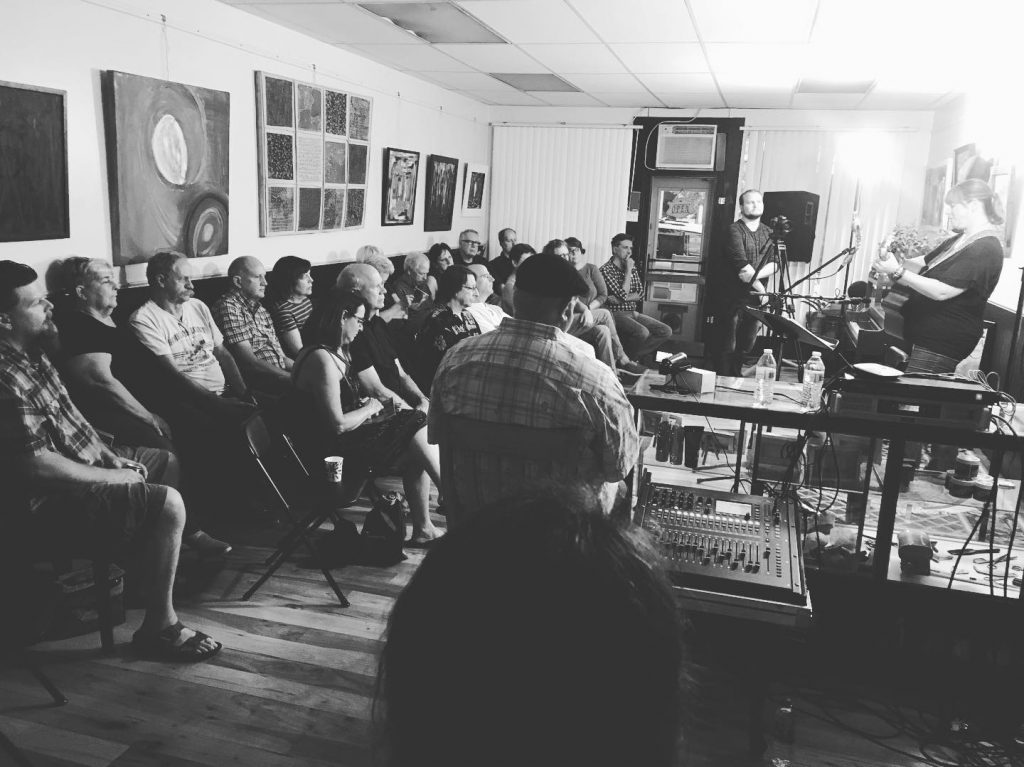 The House of Jane Songwriter Sessions are the latest addition to a music scene that runs as deep and wide as the Ohio. The community hosts four music festivals, including RibberFest, Roostertail, and RiverRoots, where you’ll hear national acts like Lucinda Williams, Buddy Guy, Keb Mo, Rusted Root, Los Lobos, Ricky Skaggs and St. Paul and the Broken Bones. Bands and solo acts from all over come to Madison to squeeze in a performance between bigger shows in Nashville, Cincinnati or Louisville. The Red Bicycle Hall hosts a regular rotation of national and regional acts, including Grammy winners like Michael Cleveland.

Madison is also home to a diverse homegrown musical community. Pick a musical genre, and you’ll find it represented somewhere in Madison’s musical past or present. For example: the Best family and the Mahoney family both traveled nationally as part of the Southern gospel music circuit. Murals inside the Off Broadway Taproom memorialize local music legends Tim Ping (guitarist) and picker “Blind Boy” Roy Gentry. Contemporary players include jazz bassist Rob Houze, who owns and runs Crawdaddy Music and plays around the region with his trio. Brook Reindollar is a multi-instrumental musician who played jazz trumpet in Cincinnati before returning to his Madison roots. Other musicians have more recently made Madison their home. One of them is Robert Reynolds, former member of the Grammy-winning Tex-Mex band The Mavericks.

The last time Madison, Indiana made a national news outlet was a story in The New York Times about the connections between the town’s high suicide rate and the opioid epidemic. Like many communities across the country, Madison faces problems including drug addition, poverty and population loss. But as is the case with most places, there’s much more to the story. “It’s easy to go, oh, there’s lots of drugs. There’s no opportunity…in a rural community,” says Kim Nyberg, director of the Madison Area Arts Alliance. “…But what we have learned, and what I see in Madison, is its people are an enormous asset.”

Madison’s music scene is driven by a loose, informal affiliation of people. Take the Red Bicycle Hall, started partially by local veterinarian Kevin Watkins. Watkins and his wife first visited the town in 1998, to take in a performance by a friend’s band. After staying the night at a local hotel overlooking the river, they woke up, took in the view from their window—fog in the valley, punctuated by church spires—and thought to themselves, “What a beautiful town. Wouldn’t you like to live in a town like that?” Watkins’ wife, Margo, came from a musical family and, after moving to Madison, the couple organized several events around town before getting together with a group of like-minded locals to buy the building that would become The Red Bicycle Hall.

The House of Jane Songwriter Sessions has a similar story. The series began with a conversation between Madison native Jimmy Davis, a singer-songwriter, and Ryan Shaw, who owns the Off Broadway Taproom. Davis hosted an open mic night at the bar one evening, and the two got to talking. The Taproom is decorated with murals by local artist Patty Cooper Wells, featuring famous musicians such as Jimmi Hendrix and the Beatles. Johnny Cash played in the background. “Jane [Vonderheide] was already open and she had the piano…and I knew she was really into promoting music,” Shaw explained, sitting at a table in the dining room. “I just brought up the idea…hey, that’d be pretty cool if Jane or someone did little concerts like that.”

Roots singer, songwriter and producer Britton Patrick Morgan grew up across the river in Kentucky. He’s noticed a change in the downtown over the last few years, to a quirkier, more dynamic vibe. Morgan connected with Jane Vonderheide, the organizer of House of Jane, over Facebook and she invited him to play the venue. “Madison is very unique in that way,” he told me. In Morgan’s experience, unless there’s heavy radio promotion, people in other communities don’t come out to see out-of-towners unless they’re established, national acts. “A lot of places don’t have that kind of organic initiative…a ground up type of thing like Madison has going on.”

Nyberg envisions Madison building on its existing assets to create economic growth from the ground up. Those assets include its natural beauty (sitting along three bends in the Ohio River); built environment (the city is a National Historic Landmark, with a hundred and thirty blocks of nineteenth-century architecture); and music scene. “I think that’s how you change the conversation in a rural community,” Nyberg explains. “We know we’re not going to develop a Disney World or a theme park or whatever, but what do we have that we can build on that’s not too far-fetched, and who we really are?”

“There’s not many places I’d rather be than Madison, y’all,” Trisha Gene Brady leans over and whispers into the microphone. Brady is a Knoxville musician and a frequent visitor to Madison. Brady’s played the town more than half a dozen times—with her former band, The Black Lillies, and more recently as a solo artist. This time, she’s playing at House of Jane during MadHop, Madison’s newest music festival, which takes place across multiple venues over the course of a single day in the fall. It’s a sunny day for November. Madhop-goers migrating from one venue to another are visible through the big front windows of the store. People pass each other on the street and exchange tips on which venue to hit next, or study the schedule, mapping out their strategies. 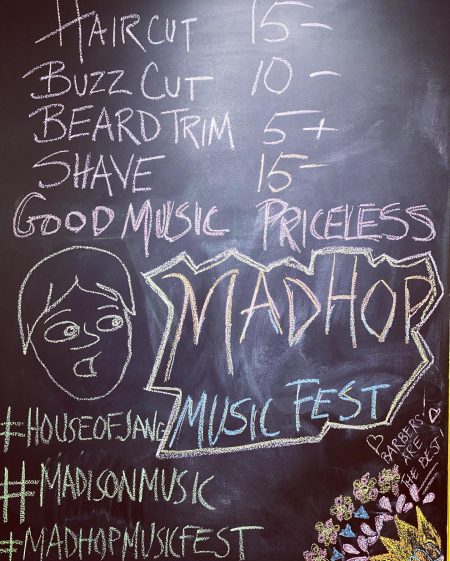 If you talk to musicians, fans, and residents in Madison, there’s a palpable sense that, as great as the music scene is now, it’s on the verge of becoming even greater. And Madisonians are dreaming big. People compare the city to music centers like Portland, Oregon; Asheville, North Carolina; Bristol, Tennessee; and Austin, Texas. “I’ve studied how this has happened in other towns and other cities, and it always starts from people feeding the creative source.” Davis said. “Every musician friend I bring to Madison just falls in love with the place. They go back to Nashville or wherever and share their experience. I believe it’s going to put Madison on the map as a destination for great original music.”

The town has already started to see some positive effects. Visit Madison, the local tourism bureau, estimates the city saw four hundred thousand visitors in 2019. The estimated economic impact of tourism on the area was $35 million, and income from innkeepers’ taxes increased by more than twenty percent. There were more than three hundred creative jobs in the Madison ZIP Code as of 2018. Bar owners say they have already begun to see the effects. Shaw told me that on nights when there are performances at other venues in town, the crowd at the Taproom increases as a natural overflow. “The music industry…is called a fruit fly industry because once music is established there are so many things that go with [it],” Nyberg explained. “[P]ublishing. Music stores. Instrument making…things that kind of work through that.”

And people are thinking about more than just tourism. “It’s not all about dollars, it’s about quality of life, quality of place,” Watkins said. “I think…that [the music and arts scene] makes it more possible for our hospital or our factories recruiting upper level people—engineers and professionals and doctors…they have to sell the town as a place that people want to live if they’re going to come work here.” A recent study conducted by Gallup and the Knight Foundation found that arts and culture help people feel attached to their community, and that communities with high rates of attachment had higher GDP growth. As rural community development expert Michael Fortunato explained at a recent creative community summit in Madison: increasingly, jobs follow people rather than people following jobs.

There’s talk in Madison’s music scene of getting more organized. People whisper the phrase, “Indiana’s music city.” A group including Davis are working on getting blanket agreements, from licensing firms ASCAP and BMI, for town-wide rights to play copyrighted songs, similar to agreements in Nashville. A new organization, the Kindred Folk Society, is hosting a music series in partnership with a public radio station in Louisville, hoping to draw a crowd up the river. Key players in the music scene are planning a meeting to discuss what the next steps might be. “Just to start a conversation about where are we going with this,” Vonderheide said. The wave of musicians fleeing Nashville hasn’t arrived yet, but maybe it’s on the horizon and these Madisonians want to be ready.

In the meantime, at least a couple of times a week, people from all over the place gather together in rooms big and small just to listen. “I’ve always loved music because it gives you hope, you know?” Morgan said during his own House of Jane concert. “I love the idea of essentially being able to find inspiration and change, to transform our lives.” Later, over the phone, I asked him what he meant. He was in downtown Nashville, the tall buildings interfering with his cell phone signal. “[Music] creates a bond,” he said. “Listening to music helps people feel: “Hey, I’m not alone in having that thought.”

In Madison, people are betting that it can do a whole lot more. ■

This story was produced in partnership with Indiana Humanities’ INseparable project. Read more stories in the series here.

Robyn Ryle is a writer, sociologist, music fan, and the author of two nonfiction books: She/He/They/Me: For the Sisters, Misters, and Binary Resisters; and Throw Like a Girl, Cheer Like a Boy: The Evolution of Gender, Identity, and Race in Sports.