Policy changes at the USPS, in the midst of the coronavirus pandemic, have serious consequences for health, business, and politics.


One morning this past April, my mom, Kathy Prout, got up from the bed where she’d spent the night sleepless, opened her laptop, and wrote a long status update on her Facebook page. “Larry Jr. is officially 100% completely out of wound VAC supplies,” it began. VAC stands for vacuum-assisted closure, and refers to a device used to help aid in the healing of particularly difficult wounds. My brother, Larry Jr., has multiple medical conditions, but the one at the forefront for him this spring was a large, deep wound on the back of his leg that, for more than a year, had stubbornly refused to heal. “We have been fighting to get the supplies delivered for 2 weeks,” my mom continued. “We ran out last night. And I’m terrified his wound will become infected and we will have to go back to the hospital. And now is not the time you want to go near the hospital.”

Like many across the country, my parents, who live in Howell, Michigan, have been experiencing a mail slowdown exacerbated by COVID-19, a President unsupportive of coronavirus-related support for the United States Postal Service (USPS), and a new Postmaster General who has further slowed delivery with policies restricting overtime and instructing postal employees to leave mail behind if it is processed late. These policies represent “a ‘sea change’ in postal policy, re-envisioning an institution older than the nation itself as a for-profit arm of the government,” according to industry experts, and are in line with the President’s desire to restructure and privatize the USPS.

The USPS has been floundering, fiscally and in terms of quality of service, for years, but these developments have made things worse. And they come at a particularly bad time for people like my family. With two medically fragile people in the house—my dad (Larry), who has a liver disease and blood clotting disorder, and youngest brother (Larry Jr.)—my parents have always relied, in some part, on mail delivery for medicine, medical supplies, and other essentials; since the beginning of the pandemic, that reliance has become near-total. 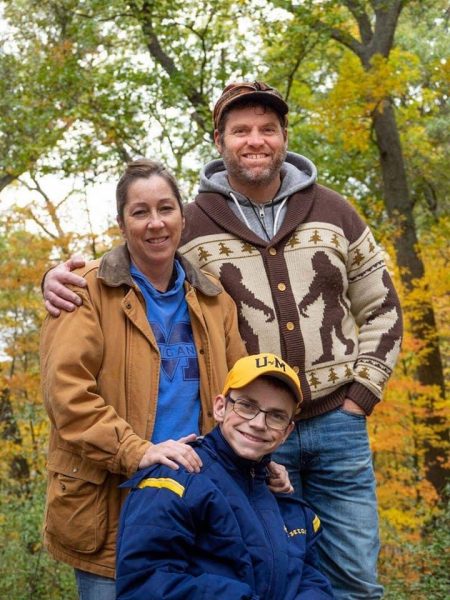 The writer’s parents, Kathy and Larry Prout, with her brother, Larry Jr.

“When coronavirus first started, I was already on top of it,” my mom told me when I asked to interview her for this story. My siblings and I joked in early March that Kathy was born to endure a pandemic: she is resourceful, creative, and good at telling people when they need to take a step back. But there was no preparing for the rush, by panicked but otherwise healthy people throughout the nation, on the medical supplies—from Pedialyte to alcohol swabs—that my dad and brother rely on to keep them healthy and alive, or for packages that went undelivered for weeks.

The stories I’ve heard about mail delays in Michigan range in length and severity, but all are unusual, and all bring with them a rush of the ambient anxiety and uncertainty that’s been prevalent since the pandemic began—or since Trump was elected, depending on who you’re talking to. Two weeks ago, a family friend in Howell mailed a letter to someone in Jackson, a town about forty-five miles to the southwest. The recipient has yet to receive it. Suzi Watson-Robertson, another friend who lives in the tiny village of Cement City, ordered a birthday present for her sister back in May; the present, coming from a warehouse in China, is marked as shipped, but she’s still waiting. “We suspect it is sitting in Customs waiting to be ‘approved’ for delivery by USPS. We are rural, and that makes it even longer,” she wrote to me.

Sometimes, delays like these are simply inconvenient. But in many cases, they have medical or health-related consequences. One source, who works for an independent pharmacy in Portage, Michigan and asked to remain nameless, emailed me about the challenges they face on a daily basis. “…We mail medications to patients using only the USPS, and we are starting to find that some mail is indeed being delayed,” she wrote. For example: “Many of the medications we mail are eyedrops going to patients who have been scheduled for eye surgeries. If medications are not received on time, surgeries must be canceled.”

Pharmacies like this one are responsible for ensuring prescriptions are refilled in a timely manner and, for those who depend on the mail for their meds, packages are mailed early enough so that patients don’t run out. The elderly, people with disabilities, and people who live in rural areas are particularly likely to rely on mail delivery for their medications—as are veterans. The vast majority of Department of Veteran Affairs prescriptions are fulfilled via the VA through their Meds by Mail program, but here, too, the slowdown has had dire impact. Recently, a reporter for the veterans’ news and culture website Connecting Vets spoke to dozens of veterans throughout the country who all said that, in recent weeks, they’ve faced wait times that have “double, tripled, or worse.”

“USPS tracking information has shown us that, on occasion, packages are held up in certain USPS distribution centers for more than a day or so, thus further delaying delivery of much needed medical supplies,” my source wrote. “Our pharmacy’s return address is clearly noted on the package, so it is concerning that anything mailed from a pharmacy is being delayed for any reason.”

The delay extends to small businesses, many of whom are already struggling in a historically bad economy. Leonda Shroyer, a Kalamazoo, Michigan owner of an Etsy shop that sells vintage knickknacks, furniture, and clothing, has never seen delays in package delivery like the ones she’s seeing now. “At first, it was the international packages that were stuck in warehouses or slow cargo boats during the airline shutdowns from corona-19,” she wrote to me over email. “That was understandable. But now it’s the domestic first class and priority mail items. What is supposed to take 1-2 days takes 1-2 weeks. Even deliveries within my state of Michigan are taking as long as 2 weeks.” Sellers are unhappy, Shroyer wrote, and so are customers.

Chaley Chartier works with The Detroit Bus, a Detroit-based company that guarantees next-day, nationwide shipping on hand sanitizer. Originally, the company shipped with UPS, as USPS doesn’t ship materials deemed hazardous. But then, as Chartier tells it, the slowdown began to spill over to private companies like UPS, which tried to pick up the slack left by post office policy. “I just had one order that sat [at a FedEx hub] for three and a half months. The customer, when they finally received it, refused the package because, I mean, it’s hand sanitizer. In three and a half months, if you didn’t receive it, you probably found it somewhere else and you don’t need ours anymore.” As usual, the shipping origin was Detroit. The destination? In this case, Bloomfield Hills, a metro suburb about twenty miles away.

Chartier lives in Southfield, Michigan, a suburb just north of Metro Detroit. Southfield’s population is seventy percent Black. “I’ve been [here] almost four years, and mail’s kind of always been an issue,” she said. “But it started getting really bad.” Chartier and a couple of neighbors asked their mail carrier about the issues. “They were instructed that they were not allowed to take any overtime,” Chartier said. “So once his day ends, if there’s still mail left at the end of the day, like basically, tough shit.” The problem snowballs, her carrier told her, until basically, “they keep getting backed up, and backed up, and backed up, with no relief.” These days, Chartier said, her neighborhood only receives mail two to three days a week; outgoing mail service no longer exists. To mail an item, she said, residents must take it to the post office.

The slowdown also has political repercussions. This week, Michigan held its state primary elections. More than a million and a half people voted by mail, a record number for the state. But slowdowns in processing, caused in part by the new post office procedures, caused problems. Detour Detroit reported that some residents never received their absentee ballots, or received them too late, despite requesting the ballots as early as the beginning of June. “I’m fortunate that I’m mobile and able-bodied,” Chartier said. In the upcoming general election, she will be able to drop off her absentee ballot if the mail is still dysfunctional. “But there’s a group home on my street, [and] there’s elderly people who live here who may not have the same ability to do that.”

Meanwhile, small business, individuals, and families like mine face significant challenges. Delivery has been better in the last few weeks, at least in my parents’ experience. In April, my mom was able to convince her insurance to cover a local wound VAC supplier so she no longer had to rely on shipping from out of state. Our family vet offered her non-latex gloves and other medical supplies, and she found my brother’s nutritional products through a chance connection. She has her own stockpile going now—perhaps contributing, she knows, in some way to shortages of medical supplies that led to her Facebook status—but at least she knows her son and husband won’t run out of alcohol swabs or Pedialyte anytime soon. By the end of that April day, my mom had updated her status again: “We have wound vac supplies to hold us over until his shipment can be tracked down! People are GOOD! Thank you thank you thank you! My heart is in a puddle! Love our community!”

In other words, in light of federal policy failures, my parents have been forced to do what many vulnerable people across the country have done, using everything from GoFundMe pages raising money for medical bills to mutual aid groups distributing food to homebound folks: rely on the uncertain chance that friends and strangers in similarly precarious positions can meet our most urgent, basic needs, simply because the offices and institutions responsible for doing so can’t—or won’t. ■

Katie Prout is a freelance writer in Chicago. Her work has appeared in Longreads, LitHub, and elsewhere.