On the walls of a Pittsburgh-area church, twenty-five scenes of God, war, justice, family


In 1935, artist Maksimilijan (Maxo) Vanka joined fellow Croatian immigrant, the writer Louis Adamic, on a trip to American industrial centers, including ten days or so in Pittsburgh. Maxo absorbed the city, as was his habit, through his sketchpad. He produced enough images to mount a one-man show at a gallery in the city’s Oakland neighborhood. His work—the grasp and depth of his interpretive abilities—left an impression on Father Albert Zagar of St. Nicholas Croatian Catholic Church in Millvale, a small, working-class borough adjacent to Pittsburgh.

Father Zagar, also a native Croat, wanted to tell the story of his immigrant congregation—their struggles, sorrows, hard labor, family strength, and simple, enduring faith. He raised money with a relentless spirit and persuasive vision. What more enduring testament, he thought, than art, larger-than-life murals adorning the sanctuary? And he knew just the artist: Maxo Vanka. The commission would reward the artist, who worked alone, $5,000. Vanka had long before left the church (likely becoming an atheist), and had married a Jewish woman from New York City, Margaret Stetten. But none of that seemed to matter.

The priest and the painter, who went on to have a close lifelong friendship, agreed that half of the twenty-five murals would adhere to religious themes while the others could tell secular stories of Maxo’s choosing. Vanka worked with water-base paint applied directly to the church walls, depicting social justice causes, family relationships, immigrant plight as freshly as twenty-first century headline stories—a mother grieving, sons killed in war, a capitalist family feast. (Vanka, a pacifist, had served as a Red Cross volunteer in WWI, which no doubt influenced his vision.) He worked at a furious pace during stints in 1937 and 1941—sometimes completing a single mural in four days—and returned, in 1951, to paint a banner across the choir loft.

TIME magazine covered the story of Maxo’s murals, which were created around the same time federal patronage for public art in the U.S. was reaching its height. “Pittsburgh broke the mold for New Deal mural art,” says Sylvia Rhor, director and curator of the University Art Gallery (UAG) at the University of Pittsburgh. Rhor is a leading expert on American mural art history, but she told me she knew nothing of Vanka and his Millvale murals until 2004. “I was raised Catholic. I knew murals, including church murals. I’d seen thousands of murals in cathedrals all over the world. And when I moved to Pittsburgh, someone mentioned the murals in St. Nicholas. Then you had to attend Mass to see them.” One Sunday, she went. “I was flabbergasted. In awe. I had to pick my jaw up off the floor,” she recalled. “And now they are my favorite in the world.”

Over the years, the murals suffered physically, mostly from water and salt damage. About a dozen years ago, a nonprofit, the Society to Preserve the Millvale Murals of Maxo Vanka, formed to conserve the murals, install proper lighting, and create educational programs related to Maxo Vanka, his life and work. In the years since, the murals have been designated as landmarks by the Pittsburgh History and Landmarks Foundation and the National Register of Historic Places. The organization has funded the conservation and lighting of twelve of the twenty-five murals, and, according to the Society, four thousand people visit every year.

The conservation work has been led by Rikke Foulke, who remembers first seeing the Vanka murals in 2009. “I did some crude tests and found that they were so sensitive. I wasn’t sure [successful conservation] could be done safely. It was daunting.” The first step was to figure out exactly what medium the artist had used. Vanka, trained in traditional methods, had not made true frescoes, which start with application of paint onto wet plaster—the walls of Saint Nicholas had been set decades earlier. So he invented something that combined animal protein and a plant-based gum. (“It reminded me of poster paints from my childhood,” Foulke said.) Then came Pittsburgh’s famous smoke and soot, which had settled in, and water seepage from a storm-damaged roof that took years to reveal itself. But cleaning has been possible, with Foulke’s team relying on water-based products, adjusting the pH level, and other intricacies known to chemists.

The following images—by Amy Fisher of Pawsburgh Photography, shared here courtesy of the Society—reveal selections of the twenty-five murals, in varying stages of restoration. In them, Vanka’s vision of the challenges, labor, exploitation, and faith of working-class immigrants carries across centuries. 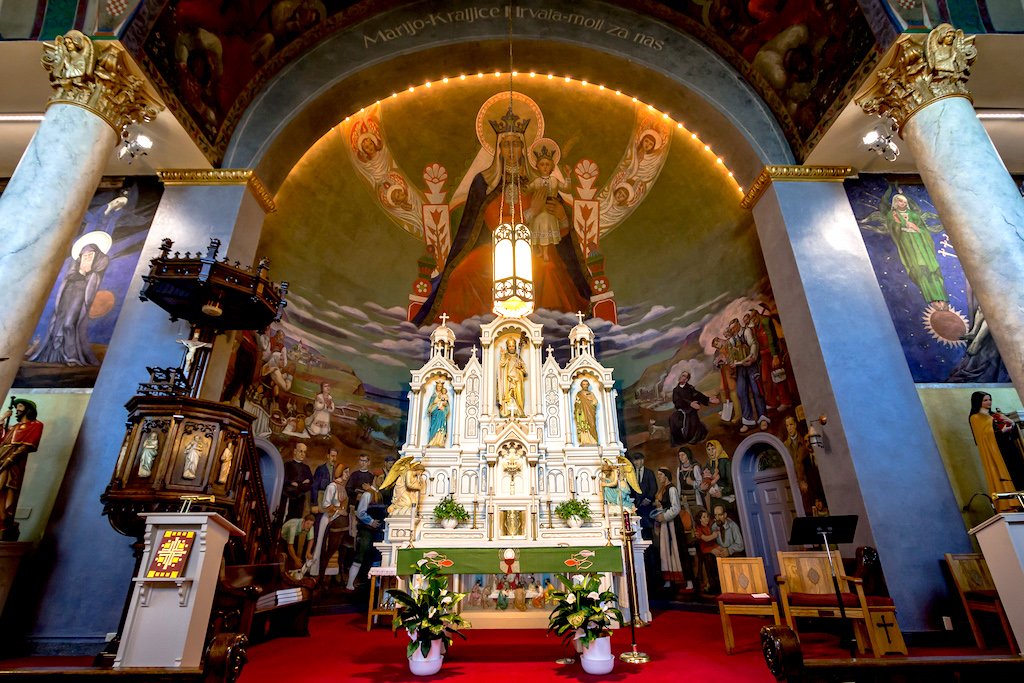 Mary, Queen of Croats (1937). Vanka’s first complete mural for Saint Nicholas Church in Millvale. Mary is painted as a peasant in Croatian old-style colors and textile design, likely in homage to Vanka’s foster mother Dora. Father Albert Zagar is also depicted, kneeling and pointing to the shovel. The industrial Allegheny Valley forms the background. Images at the bottom of the altar were added later by another artist. 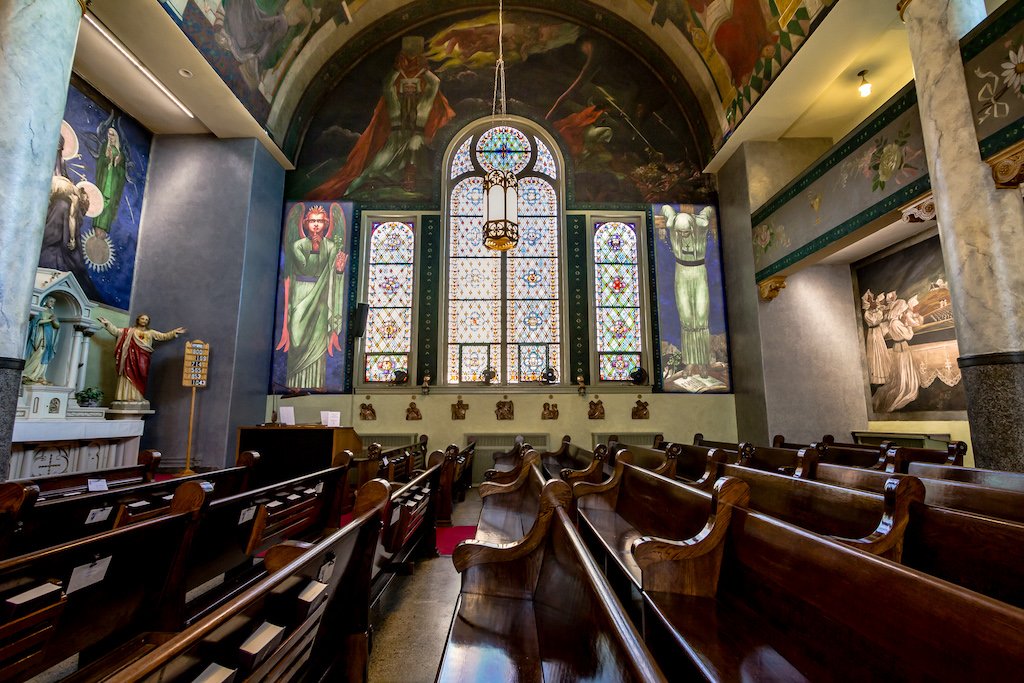 Old Testament Wall (1941), above and around stained-glass windows. Moses receiving the Ten Commandments on a tablet from the hand of God, while Israelites worship the Golden Calf.  The commandment “Thou shalt not kill” is written in Croatian. On the right, Mother Croatia is on the Cross, which may have been Vanka’s expression of the fascist invasion of Croatia. This is one of the murals most damaged by water. 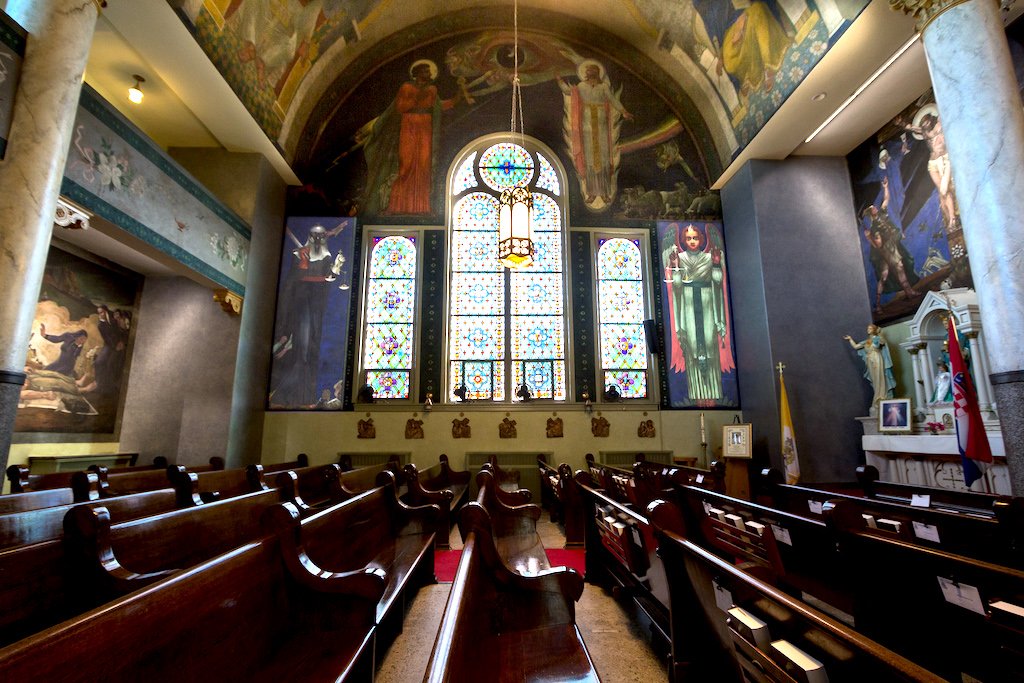 New Testament Wall (1941). The resurrected Christ, indicated by his golden sash, with St. Peter receiving the key to the Kingdom and St. Michael (the archangel) directing a lightning bolt at Lucifer. A large figure in a gas mask carries a bloody sword and unbalanced scales. The image of Justice holds a balanced scale of spiritual flame. 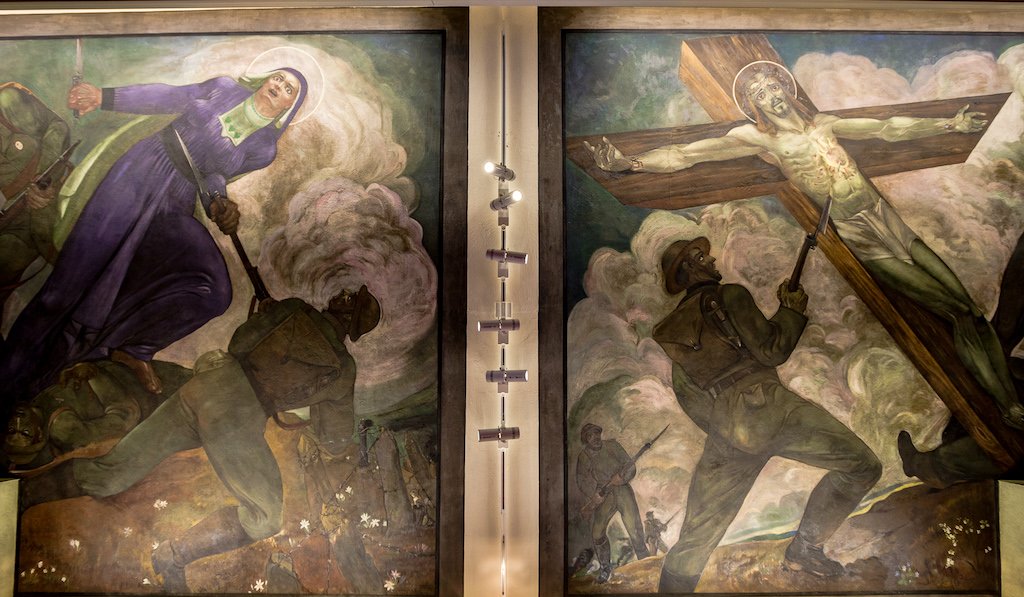 Mary on the Battlefield (1941) and Christ on the Battlefield (1941), on the ceiling under the choir loft. A crucified Christ between two soldiers. Mary rests her foot on a dead soldier as she tries to stop the killing. The dark green pallor of the skin was a memory Vanka took from his WWI service with the Belgian Red Cross. Conservation of this mural took twelve months to complete. 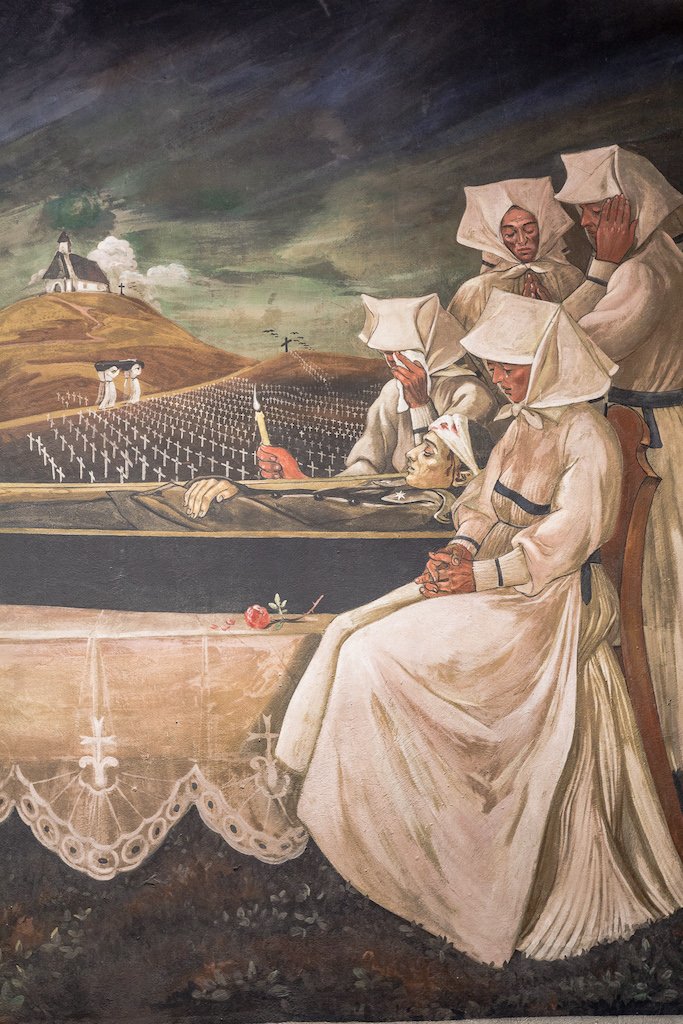 Detail of Croatian Mother Raises Her Son for War (1937). Women around the casket are wearing traditional mourning dress. The blue sash signifies motherhood. Vanka first painted this scene in 1915, right after his WWI service. Conservation completed. 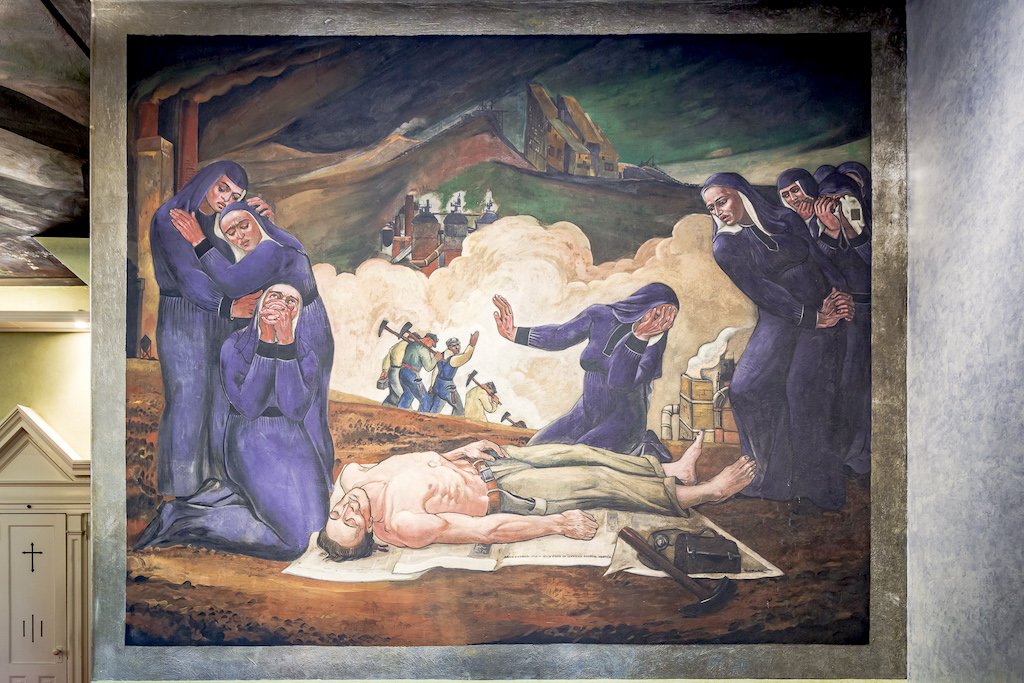 Immigrant Mother Raises Her Sons for American Industry (1937), facing the Crucifixion. The grieving mother, whose sons died in a mining accident, is comforted. Miners going to work in the background. It is believed that Vanka based this mural on an actual event. Conservation completed. 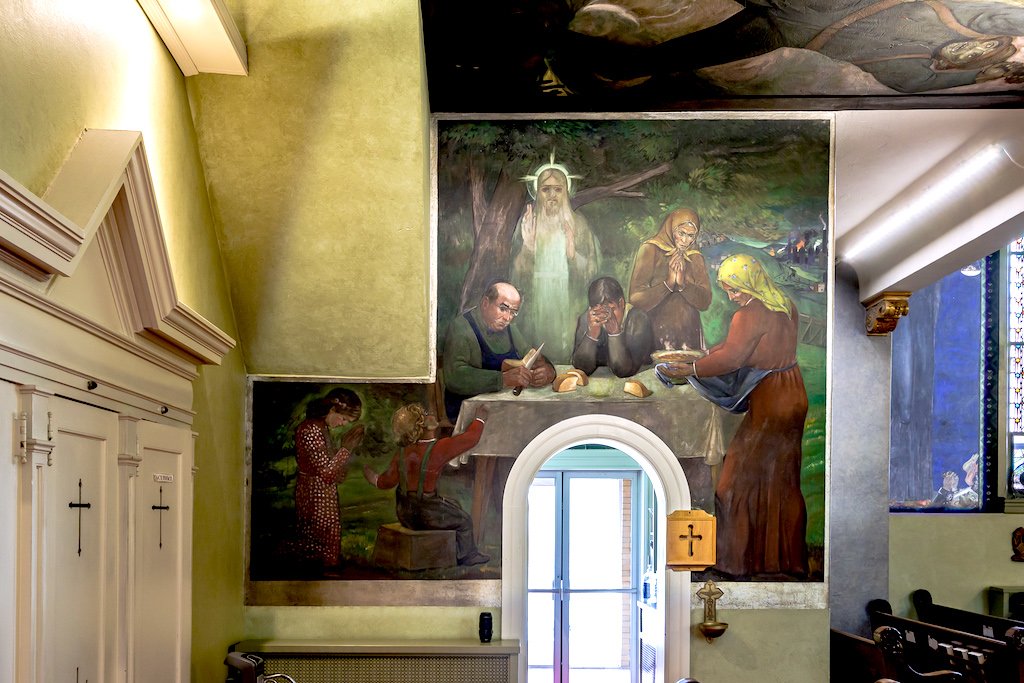 Simple Family Meal (1941), under choir loft over entry to the nave. A poor immigrant family in Millvale shares a meal of bread and soup. Allegheny River and steel mills in background. Thelittle girl, modelled after Vanka’s daughter, Peggy, notices Christ, the Unseen Guest. The Burgess of Millvale cuts the bread. Conservation completed. 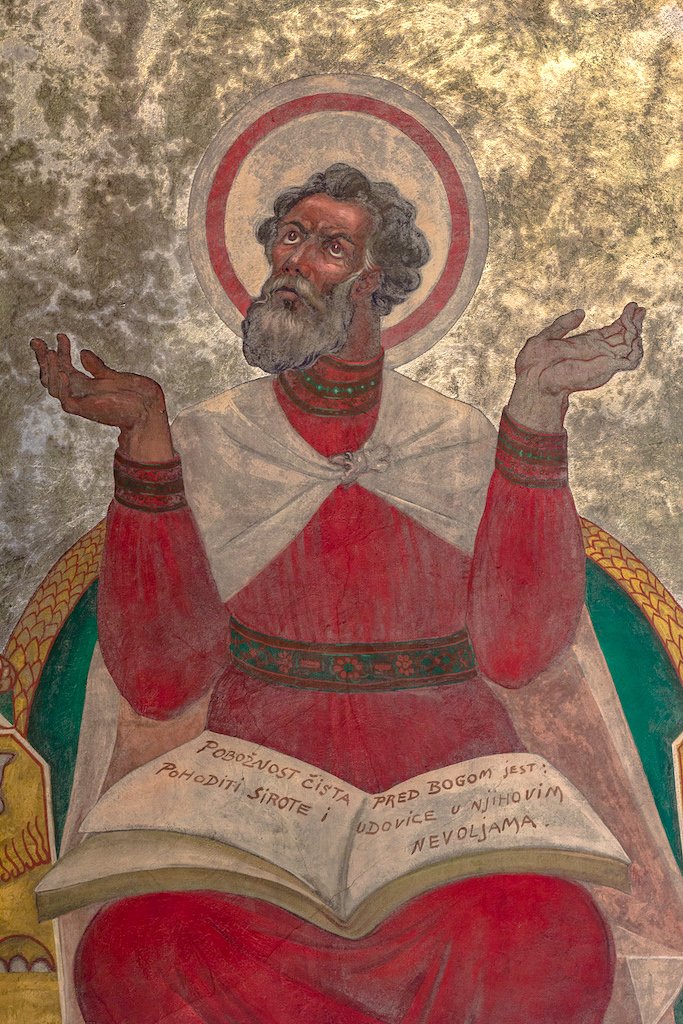 St. Mark (1937). One of the four evangelists Vanka painted on the arches flanking either side of Saint Nicholas Church. The lions with wings, on the arm rests, are his symbol. 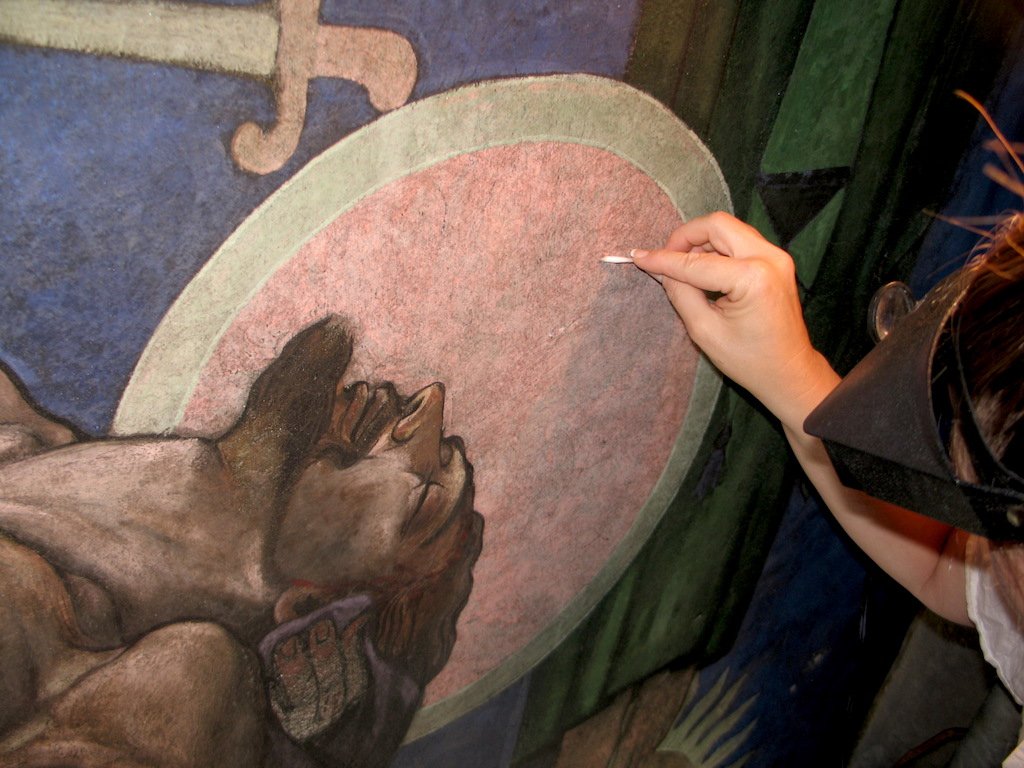 The Pieta (1937). A close up of a conservator working to clean and restore this mural. 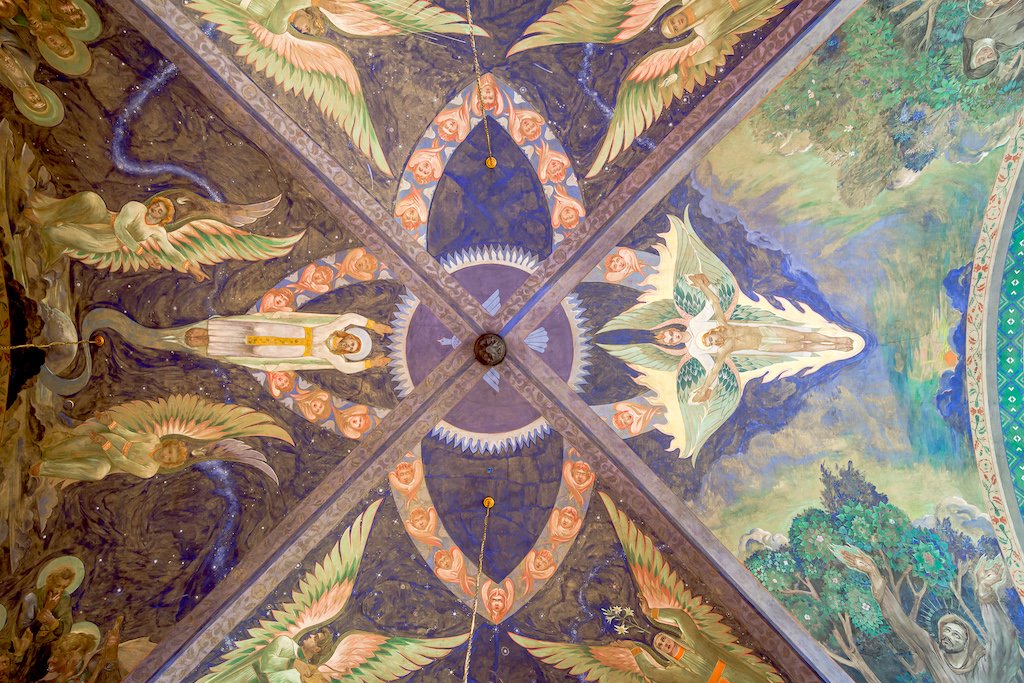 Transcendent Vision (1941). The front panel portrays the Ascension of Christ in a star-studded heaven. The back panel is possibly Christ being lifted up to Mount Alvernia by a fiery winged Seraph (angel), or the resurrected Christ descending into hell. ■

Margaret Shakespeare reports archaeology, design, wine, music, wildlife, agricultural, and other stories from destinations worldwide. Her work appears in many national publications. She lives in New York City and the farmlands of Long Island.