By Jacob A. Bruggeman


Where can a family of five or more vacation while staying within its financial means? That was a question many Americans were asking in the mid-twentieth century, as large, middle-class families became the up-and-coming icons of the 1950s and 1960s. The postwar years, more than ever before, saw mothers and fathers putting food on the table with some change left in their pockets—and with a bit more money to spend and time to spare, they began regularly camping, road-tripping, and vacationing as families.

My maternal grandparents, Lillian “Lil” Russo and Tullio Joseph “Joe” Buccitelli, were both raised in traditional Italian-Catholic households that prized family and community. As they built their own life together in Wadsworth, Ohio, they, too, joined other Americans in looking for opportunities to spend time with family and friends in recreation. Around the same time, in 1957, Ruby and Cliff Conrad purchased some land on Elk Lake in Elk Rapids, Michigan. They opened White Birch Lodge a year later. My grandparents and their six kids first visited “the Lodge,” or “WBL,” as its frequent flyers affectionately call it, in the mid-1960s. The rest, as they say, is history. 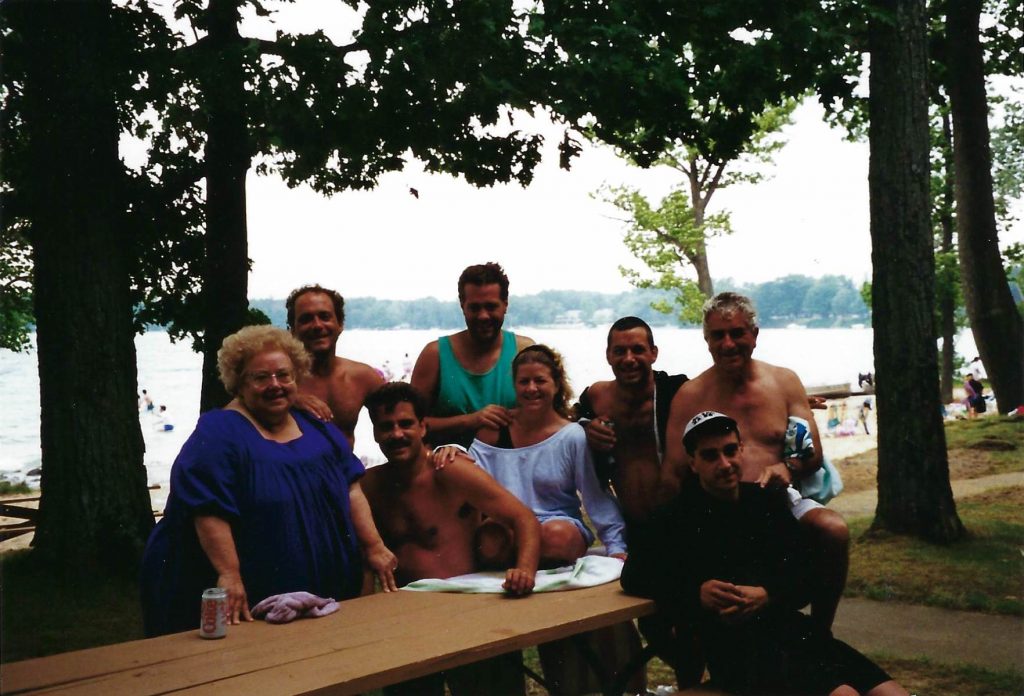 We don’t know how, exactly, my grandfather discovered the Lodge, an all-inclusive resort in the northernmost reaches of Michigan’s “mitten,” or “Lower Peninsula.” Our family lore dictates that, while on business in Michigan, he simply read an advertisement for the property and was struck by its offerings and affordability—cost being an ever-present question on the mind of man with six kids.

Returning to Ohio after the first visit, the family spread the word, eventually bringing other families along. The Cossentinos, Perrys, Fisters, Finns, and the Gordons (whose granddaughter, incidentally, recently married Mike Conrad, the grandson of Cliff Conrad), all came to cherish the Lodge alongside the Buccitellis. Our cousins, the Mastellinos, also made their way to the Lodge; later, family friends from Ohio, the Kerrs, spent a week with us in Elk Lake’s remarkably blue, clear water.

Tucked away on Meguzee Point, a forested, lakeside drive, White Birch Lodge is a hard place not to love. Afternoons there are often remarkable. If Michigan permits sunshine, the first few hours after lunch can feel like a lifetime. At the heart of the Lodge is a large patch of grass adorned with flowerbeds and shaded by a canopy of leaves growing from beech, maple, pine, oak, and, of course, white birch trees. This spot is known as “The Grove,” a green space shared by adults playing cards and kids kicking soccer balls.

White Birch Lodge became the center of an annual multi-family celebration. My grandmother would monitor her children as they ran about the place, playing with other kids and causing—usually—some kind of ruckus. Reflecting on my own involvement in ruckuses, I can’t help but smile. Looking back on the time I’ve spent there as a young adult, I am taken by the strength of the community the Lodge has nurtured. It is a good thing to be a culprit of childhood mischief in a place that, guests of all ages and backgrounds seem to agree, is uniquely equipped to absorb both the energy of youth and wisdom of old age. 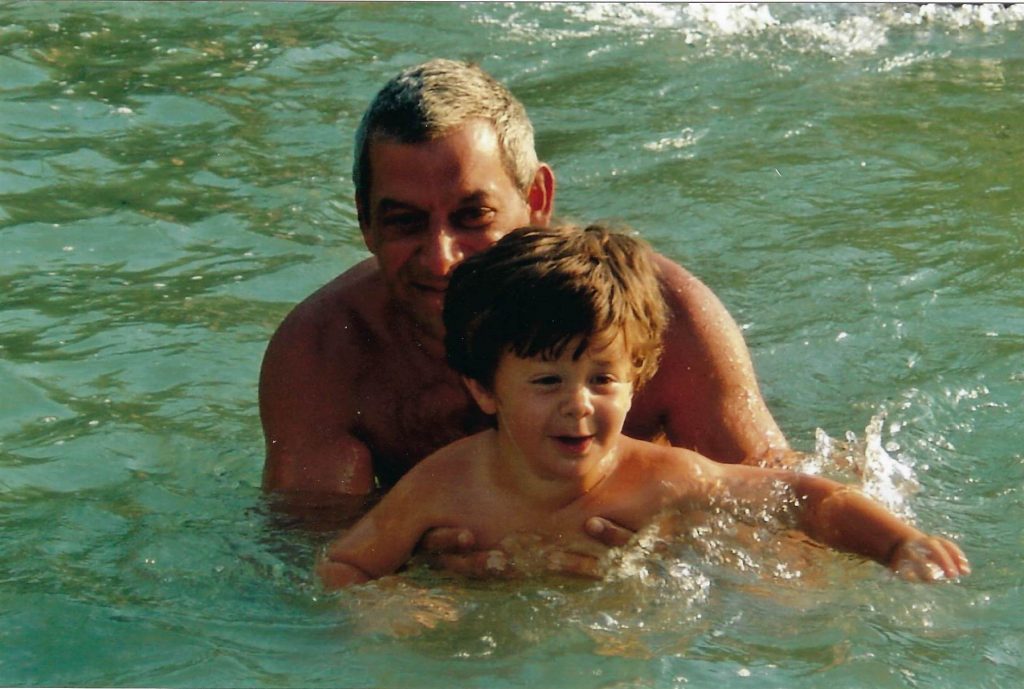 Along the perimeters of The Grove are charming and old concrete sidewalks. Having weathered decades of children’s antics and wicked Michigan rainstorms, some sections show exposed pebbles, others are lifted ever-so-slightly by the labyrinths of roots growing beneath them. It is, simply and finally, a magical place. While at the Lodge, time moves a bit slower, people love a bit harder, and the day-to-day anxiety and busyness felt by so many seems to melt away. Tragic, then, is the goodbye, which happens inevitably every year.

My mother learned to swim at the Lodge’s “baby beach,” a small, secondary beach on the forty-acre property; I learned to ski just about a hundred feet away, right off the “ski dock.” Once upon a time at the Lodge, my Mom and Dad announced that they were pregnant (with me) to family and friends gathered on a picturesque overlook known as “the point”; someday, I hope to take my spouse and children to the Lodge, to welcome them into a sliver of the world I have known and loved all my life.

Several years ago, my grandparents passed away on the same day. Their funeral was attended by a few hundred people, many of whom had shared summers with my family at the Lodge. At the reception, our family covered the walls with photographs of my grandparents, many of which were taken at the Lodge or with friends made there.

A few years later, I missed our annual trip to the Lodge to study in Italy for the summer. As my program came to its conclusion, the rest of my family boarded a flight from Cleveland to Rome to pay me a visit. I remember with great clarity that, once they arrived, we discussed my family’s trip to the Lodge. I had plenty of questions: “How was the water?” and “What is Mr. so-and-so up to?” I was glad to spend a few hours discussing our Lodge friends—our Lodge family—while making the long drive from Rome to Sorrento. 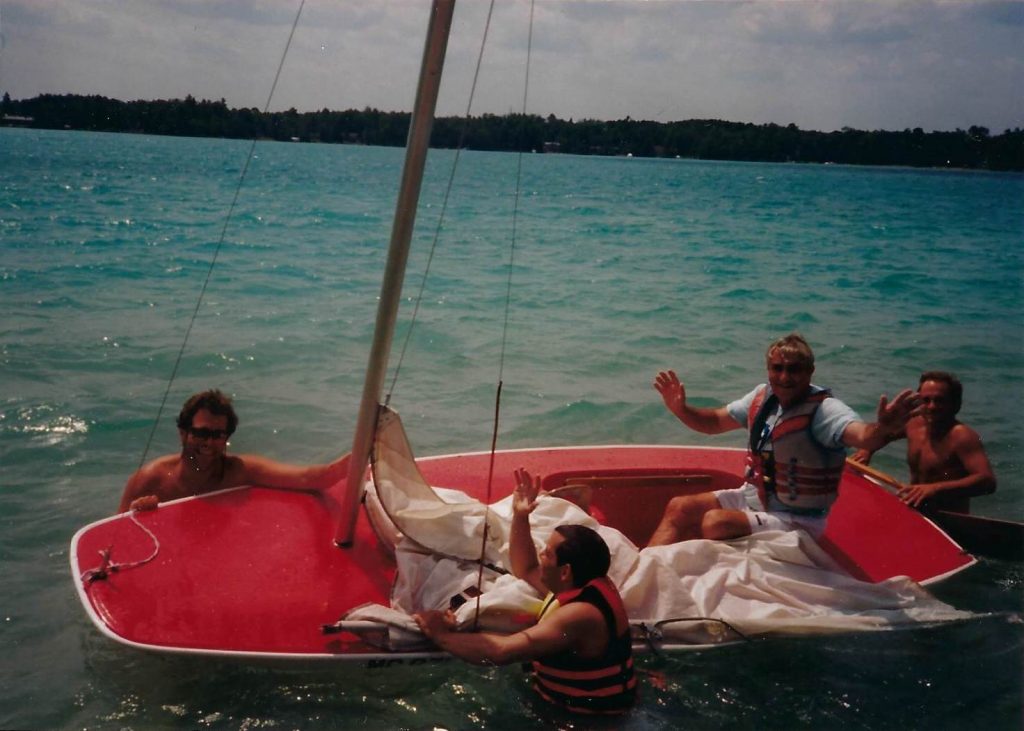 The author’s grandfather (seated), father, and uncles on and around a sailboat in the mid-nineties. (Photo courtesy Jacob Bruggeman.)

More than anything, though—more than my family’s unity in this sendoff, more than the beauty of the scenery—those moments were meaningful because my grandparents understood the Lodge to be, like Italy, a second home. When I think of them, I often picture them smiling, laughing, in love with each other at the Lodge. I can think of no more beautiful resting place. ■

Jacob Bruggeman studies history and political science at Miami University, where he recently received the Joanna Jackson Goldman Memorial Prize. Jacob is an Associate and History Editor of the Cleveland Review of Books, co-editor of the Urban History Association’s book review section in The Metropole, and a co-founder of The New Herald. Next fall he will begin coursework for a MPhil in Economic and Social History at Cambridge University.