Michigan’s Primary Has Been Heralded As The Next Test For The “Blue Wave,” But What Does It Mean For Muslims In Michigan?

“Everybody let’s imagine something together. This can be our great moment. It’s nine days from now, Aug 7. Election night. There are headlines all around the world. We see them on CNN, on MSNBC, even on Fox News.

“And what are we going to see?” asked Boston-based Muslim activist Shakeep Alam from the dais of the July 29 closing session of the Universal Muslim Association of America’s national convention in Dearborn, Michigan.  “It reads: Muslim candidates win primaries in Michigan. They’ll see Rashida (Tlaib) and Fayrouz (Saad) are the first Muslim women nominated for Congress. And, one of the big reasons why I’ve been back in Michigan five times in the last year, is because we’re gonna see in bold print, it says ‘Dr Abdul El-Sayed, first Muslim nominee for governor in American history.’ ”

Alam paused for a pensive moment, then concluded: “How is that going to make you feel? How proud will you be, every single one of you?”

They may find out soon; Tuesday’s primary election in Michigan could see the most significant political breakthrough for American Muslims in U.S. history. The Wolverine State, with its huge and robust Muslim communities in the Detroit suburbs, has 13 Muslims running for offices at the county, state and federal levels this year. This, many activists say, is the result of years of increased Muslim political organizing that has seen Muslims elected for lower offices;  in 2015, for example, the suburb of Hamtramck became the first in the U.S. to have a Muslim majority on its city council. 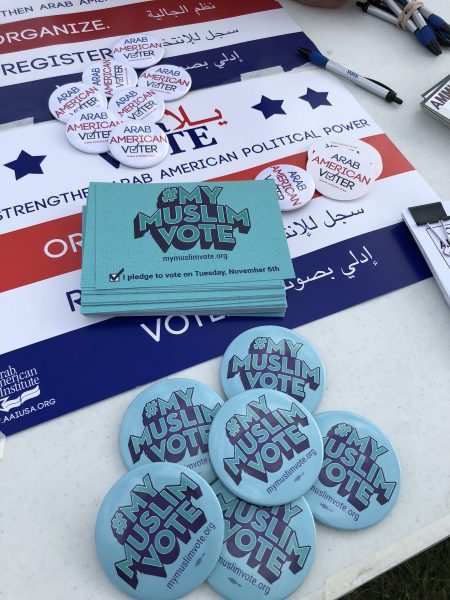 “For decades, American Muslims have wanted our voices heard in the political process,” Alam said. “But this year in Michigan, you not only have one candidate, but alhamdullilah, you have an entire slate of extraordinary candidates. Think about that. Nowhere else in America do you have a slate of Muslim candidates. It is an amazing opportunity.”

Or, as, Dawud Walid, the state executive director of Council on American-Islamic Relations, puts it: “This is the most definitive election in the history of the Michigan Muslim community.”

Of the three top-tier races mentioned by Alam, it is Tlaib, a 42-year-old former state representative, who appears to have the best chance of winning. She received The Detroit Free Press’ full-throated endorsement and is tied for the lead in a crowded Democratic field to replace former U.S. Rep. John Conyers, a Democrat forced to resign last year amid a sexual harassment scandal. If she wins on Tuesday she’ll essentially clinch her position as the first Muslim woman in Congress – two Muslim men have served – because it’s a such an overwhelmingly safe Democratic district that there are no Republicans running and thanks to Conyers’ vacancy she’d be sworn within days of the November general election. (If elected in November, Saad and Minnesota candidate Ilhan Omar, a Muslim woman seeking the Democratic-Farmer-Labor Party nomination in a Minneapolis district in an Aug. 14 primary, would join Tlaib in the House in January. A primary win for Saad would be followed by a tough and competitive general election in a district that now held by a retiring Republican.)

Still, for El-Sayed to win the Democratic nomination for governor would be an even bigger coup:  no Muslim has ever been nominated by a major party for any statewide office in the U.S. The 33-year-old public health expert is in third in almost every poll behind frontrunner Gretchen Whitmer, a former Democratic leader in the State Senate, and Shri Thanedar, a millionaire who has spent nearly $12 million of his own money.

But El-Sayed has a lot going for him, including endorsements from and personal appearances by progressive stars Sen. Bernie Sanders, I-Vt., and Alexandria Ocasio-Cortez, the 28-year-old who became a phenomenon in June by unexpectedly unseating the veteran Democratic Rep. Joe Crowley in the New York primary. El-Sayed hopes for the same kind of surge that carried Sanders to victory in the state’s 2016 Democratic primary against Hillary Clinton.

“The last time people wanted to know what was gonna happen in Michigan and paid attention to the polls, they were wrong twice,” says El-Sayed, referring to Clinton’s leads prior to the 2016 primary against Sanders and general election against Donald Trump. “Polling in Michigan just doesn’t work and there are clear structural reasons why. If you’re polling people who can answer a landline in the middle of day and you’re assuming somehow you can create some population representative sample of the state of Michigan you’re clearly don’t understand math or you’ve forgotten the fact that people have changed.”

The candidate’s stump speech is as lyrical and movingly delivered as any in politics. “I became a doctor because I wanted to learn how to heal, and then I realized it was our politics that are making people sick in the first place,” he routinely says to applause.

His cadence has been likened to that of another upstart with a name wrongly considered to ethnic for mainstream voters, Barack Obama, as in this bit of oratory at the UMAA conference: “‘He’s too young, he’s too brown, too Muslim, too gay, too female, too black.’ We’ve all heard those words before. They said it’s impossible to break the chokehold of these corporations, it is impossible to stand up and decide that in this society built on the notion of democracy that we can actually have that, impossible to get Betsy DeVos out of our schools, impossible to get government out of the way between a woman and her doctor, impossible to guarantee equal rights for every single Michigander in this state. They say it’s impossible.  … We will make reality out of their impossible.”

“This is the most definitive election in the history of the Michigan Muslim community.”

El-Sayed’s Democratic opponents have studiously avoided using his religion as a political weapon, and Whitmer has  denounced Islamophobic remarks about him in an otherwise contentious campaign. But El-Sayed has faced attacks, most notably from State Sen. Patrick Colbeck, a conservative Republican who has used sensational, denied and disproven claims that El-Sayed has ties to the Muslim Brotherhood and aims to impose Sharia law if elected.  Both the Michigan Republican Party and the conservative editorial board of the Detroit News have scolded Colbeck for, as the newspaper called it, a “despicable tactic.”

Yet anti-Islam sentiment continues to burble and is likely to become more blatant should El-Sayed win. On Nextdoor.com, a social media app that groups users into small geographic areas, conversation has become contentious in a mostly Democratic area outside Ann Arbor.

“The main reason not to vote for El Sayed is that he is Islamic and their doctrine goes totally against our Constitution,” one woman wrote. When challenged, she persisted in a response: “The Muslim ‘faith’ includes politics and insists on good Muslims to work toward ‘decimating’ the West.” Another user, in the same stream, wrote, “I won’t vote for any Muslum. (sic) Either they are American through [and] through, or you won’t get my vote.”

Concerns about anti-Islam sentiment – along with outrage over Trump’s travel ban on people from several heavily Muslim nations – has motivated the state’s Muslim community to organize in ways it never has before. A coalition of groups held an outdoor get-out-the-vote fair in Dearborn called #MyMuslimVote at which hundreds of locals came to hear El-Sayed, Tlaib, Saad and other candidates and activists talk about why it’s so important to go to the polls on Aug. 7. The state’s 120,000 Muslims registered voters, should they band together for El-Sayed, could be decisive in a non-presidential-year primary that traditionally had seen turnout below 20 percent.

“When Islamophobes attack our community, they attack all of us,” said New York-based Arab-American activist Linda Sarsour, a co-founder of the Women’s March who has been in Michigan for weeks working for El-Sayed, Saad and Tlaib. “Do you think they tap you on the shoulder and say, ‘Excuse me, are you from Bangladesh or Pakistan? Are you from Yemen or Iran? Are you Sunni or Shia?’ They don’t care where you’re from or what kind of Muslim you are. So if the Islamophobes are treating us as if we are one community, why are we not acting as one community?” 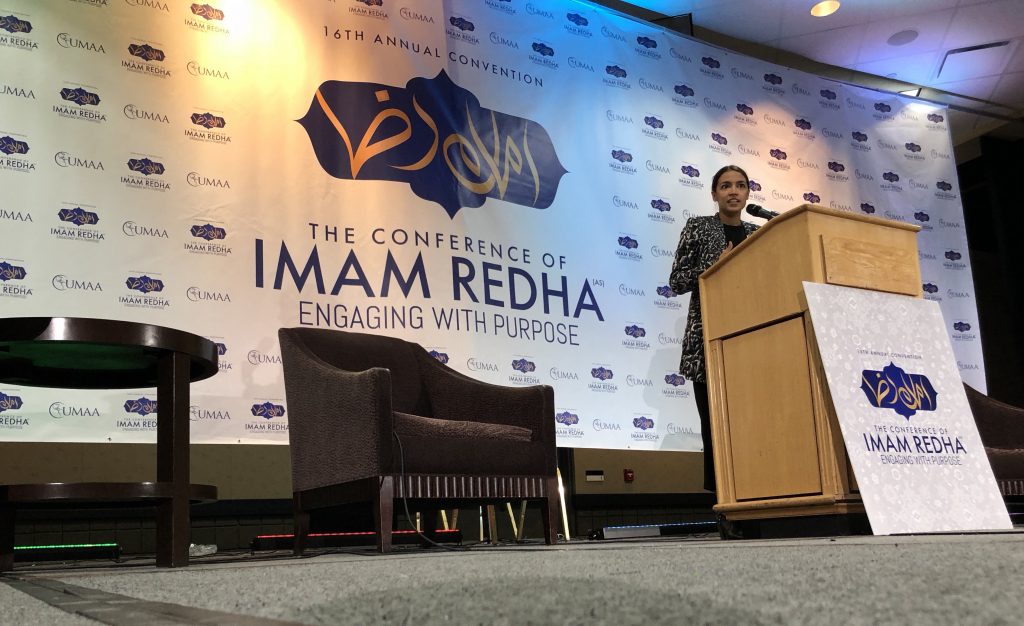 El-Sayed, a full-throated liberal, has had to be careful not to stoke the jitters of more socially conservative Muslims. In speeches to general audiences, for instance, he asserts his support for women’s reproductive rights. Before Muslim audiences, however, he avoids the topic altogether.  In fact, the only major speaker at either Muslim-oriented event on July 29 to go there was Sarsour as she described conversations she had had with Muslim voters when she knocked on their doors to promote El-Sayed.

“They say, ‘Sister Linda, I like this candidate but I want to talk to you about abortion,'” Sarsour recalled. “I say, This is not about anybody asking you as a Muslim to give up anything or any personal belief that you have as a Muslim. That’s not the conversation we’re trying to have. The question in politics is, what kind of control do you want the government to have? Are you ready as a Muslim to give up control of a woman’s body to the government?”

On the campaign trail, the candidates focus on the same issues as other Democratic hopefuls – affordable health care and higher education, clean air and water, improved infrastructure, minimum wage, and a thriving economy. But they don’t shy away from talking about their backgrounds or recognizing the precedents they hope to achieve.

El-Sayed, for instance, speaks often of his Egyptian grandparents and father who came to the U.S. in the 1970s, as well as the family of his step-mother, a sixth-generation American who traces her lineage here to before the formation of the U.S. In a TV ad, he sits on a couch with his white grandparents before also showing himself taking a walk with his wife, who wears a hijab.

His parents, he tells his audiences, “agreed that they would raise their kids as proud Muslims and Americans and that those two things should not be mutually exclusive but, in fact, they are mutually inclusive. … Our job as Muslims is not just to focus on us. Our job is to focus on justice.”

El-Sayed, Tlaib and Saad all also avoided – even among Muslim audiences – weighing in on the conflict between Israel and Palestine. In an interview, Tlaib, whose mother was born in the West Bank, became tearful talking about the topic.

“I remember being 12 years old and going to a settlement that’s right next to my grandfather’s village and there was no fence and we were playing basketball with some of the Israelis,” she said. “We didn’t know, we were just playing basketball. There was this accessibility and this human contact that happens. It’s all gone. Everybody there has a right to feel free equal and safe but people keep choosing sides.”

Should either El-Sayed or Tlaib win, they will instantly become new symbols of Democratic diversity in the face of the Trump administration’s crackdown on immigration. Tlaib, for one, relishes the prospect of succeeding on the back of a Trump backlash. The president, she hopes, will be shocked when “a Muslima who got kicked out of a rally in Detroit before he was elected for asking a question … walks onto the House floor in November.”

Steve Friess is an Ann Arbor-based freelance journalist whose work appears regularly in The New York Times, Playboy and elsewhere.