The Art of Labor


On Broadway in downtown Milwaukee, one might notice some tall bronze sculptures of burly men atop a building on the campus of the Milwaukee School of Engineering. The building is the home of the Grohmann Museum, an art museum dedicated to the exploration and study of men at work that opened in 2007. All of the artwork was donated by the immigrant industrialist Eckhart Grohmann, who collected it over a period of almost fifty years.

Having fought against Wisconsin Governor Scott Walker’s assault on organized workers and having come from a working-class family of miners, house painters, farmers, and laborers, I had wanted to visit the museum since first seeing the sculptures from the street below. But it wasn’t until a few years after the opening that I entered the museum, and left with conflicted feelings.

Upon entering the building you step into a light-filled glass entryway and see a floor with a pretty tiled mosaic by H. D. Tylle called “Men At Work.” The mosaic depicts several trades embedded into the floor. There is a foundry worker, blacksmith, miner, farmer, and textile worker. You get the idea immediately that this place represents a celebration of labor, a paean to working men and women everywhere. Standing on the mosaic, you look up to see a brightly colored ceiling mural that shows Vulcan at his forge alongside Venus and Cupid. Elsewhere on the mural are depicted some of the world’s great thinkers (Marie Curie, Thomas Edison, and Leonardo Da Vinci among them). Workers—whose labor is supposed to be celebrated here and whose labor helped those great thinkers achieve their places in our earthly pantheon—are on the floor beneath the feet of those who enter, tread upon as they strive to make the world a better place through their labor. 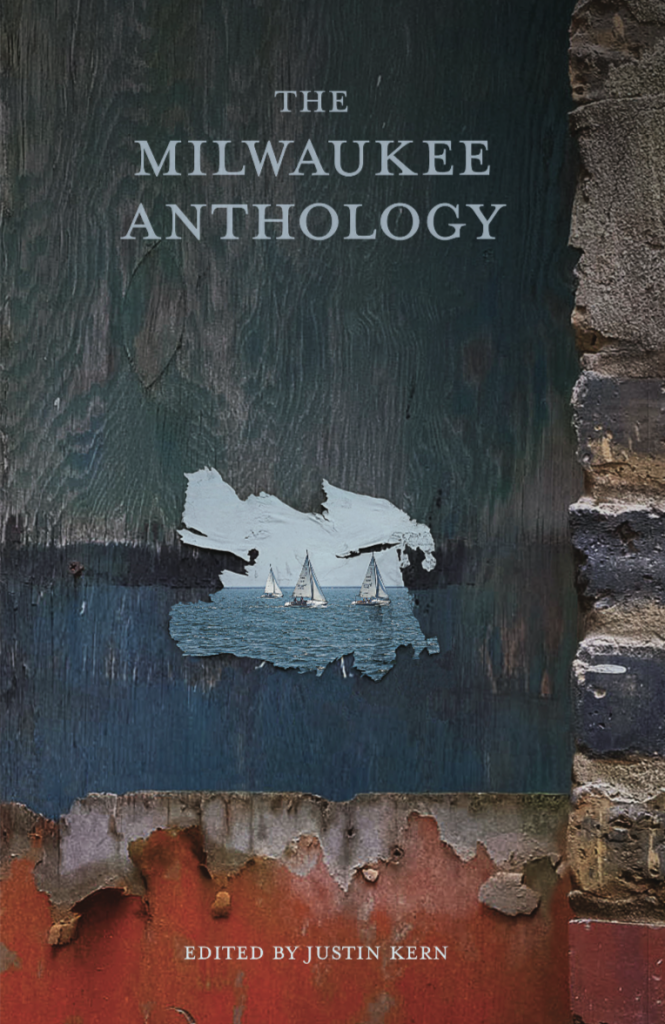 After touring the entire museum and upon further reflection, it struck me how the gods and thinkers were portrayed along with angels in the heavens above. On the floor, then, those who enter symbolically walk on the workers striving to earn a paycheck and make the world a better place. There were similar paradoxes throughout the museum, some enthralling and a few unsettling given the context of the benefactor’s background, the fruits of labor and industry, and at least one of the featured artists.

As you go through the three floors of exhibits and the rooftop sculpture garden, most of the work you see is Eurocentric, with a heavy concentration of German artists represented. Upon learning that Grohmann was an immigrant from Germany in the early 1960s, this makes more sense. (That he was hardly alone in Milwaukee’s place in German migration is worth noting, too.) Among the well-known names such as Peter Van Brueghel (the Younger) and Frederic Remington, many of the works are by unknown or lesser-known artists. Art critics may have an issue with the quality of the work, but again, given the focus of the museum on men at work, this, too, seems appropriate. Most of the laborers who toil day after day in factories and fields do so in obscurity while the captains of industry who employ them gain money and notoriety, so representations of laborers by obscure artists seems like an excellent egalitarian choice. But the choice is ultimately much more pedestrian than that. In an article on the opening of the museum in On Milwaukee (October 30, 2007), Grohmann was quoted as saying, “I’m in the foundry business . . . I have a nuts-and- bolts background. I buy art based on subject matter, not who painted it.” His intention is to show the evolution of work through his collection, not to showcase great artists (or perhaps even great art).

The museum does show men (and occasionally women) at work throughout history. While the artwork depicts laborers at their various trades, one has to keep in mind that the workers are not memorialized in the museum’s name. Instead it is named after Grohmann, the German-American industrialist from Milwaukee who made his fortune off the backs of those laborers at an aluminum casting plant and other businesses in the Milwaukee area. In a January 2008 article in the Wall Street Journal, Grohmann talked about watching workers at his grandfather’s quarry when he was a boy. “I loved to watch the guys.” In various articles he talks about his fascination with the men who labor. And the Wall Street Journal article notes that “Dr. Grohmann never lost his respect for hard labor.” (That feeling carries through in the museum’s tagline, at least: “. . . the world’s most comprehensive art collection dedicated to the evolution of human work.”)

Then again, Grohmann made a fortune off that hard labor. In negotiations with the men whose work ethic he supposedly admired, the love seemed to get lost somewhere along the line. According to the website ImmigrantEntrepreneurship.org, at one point Grohmann’s “relationship with his over four hundred workers quickly deteriorated in disputes over working conditions, wages, and benefits.” The article goes on to state that his foundry “gained a reputation among some in the surrounding South Side communities for its low pay and dangerous working conditions. Union organizers claimed ACE/ CO’s wages started at $5.85 per hour ($8.37 in 2010 US dollars), with many ACE/CO employees making $10 per hour ($14.30 in 2010 US dollars) or less. Grohmann strongly refutes these wage claims as little more than union propaganda. Contrary to the claims of union organizers, Grohmann asserts he did not run a sweatshop operation, but maintained tremendous respect for, and dedication to, his workers, compensating them accordingly.” [Note: The $5.85 amount would be $9.66 in 2018 dollars.]

The article goes on to describe how employees who were concerned about pay and difficult working conditions banded together to form a new union which was voted in, but Grohmann refused to recognize it or negotiate with the workers. According to the immigrant entrepreneur website, the National Labor Relations Board later found Grohmann and his company guilty of several wrongdoings during the election of that union, “including denying workers their annual wage increase, giving preferential treatment to anti-union workers, and expressing its ambition ‘to do everything possible’ to remain union-free in its employee handbook.” That sounds more like a man out to protect his own interests than a man who cares deeply about his workers. Perhaps he only loved those laborers who were willing to do his bidding without complaints or demands for economic justice.

A look at Grohmann’s scant political contributions doesn’t reflect a deep love of organized labor or worker justice. According to the Wisconsin Democracy campaign, Grohmann donated $2,500 between 1993 and 2011 to several of the more well-known anti-worker legislators campaigning in Wisconsin, including Mary Lazich, Alberta Darling, and Scott Fitzgerald.

There are many indications that Grohmann’s love is not so much for labor but for the fruit of labor. In his museum there are paintings and sculptures that show men using tools to cut stone, harvest crops, make beer, and more. There are also works throughout that illustrate and celebrate the tools and machinery of labor over the laborers, paintings where things like lime kilns, bridges, and ships dominate the landscape and dwarf or obscure the workers who use or make them. At times it feels more like a celebration of industry, which uses labor to achieve its ends, rather than solely the examination of “men at work” that it purports to be.

Another issue, first brought to attention by the Milwaukee Journal Sentinel in an article by Mary Louise Schumacher and Whitney Gould in October 2007, has to do with three of the artists and their relationship to the Third Reich. One of those artists, Erich Mercker (1891-1973), “was commissioned directly by Hitler’s government to create images of the Third Reich’s expanding infrastructure,” according to the newspaper. Of the 900 paintings and sculptures owned by the museum, more than eighty of Mercker’s pieces are included. According to Shepherd Express (August 24, 2014), the Wolfsonian in Miami Beach is the only other museum in the United States that owns his work, and the only book about him was produced by the Milwaukee School of Engineering (MSOE).

In 2014 the museum featured a special exhibit of Mercker’s work in which they acknowledged he was a member of the Nazi party. A Milwaukee Journal Sentinel article (December 5, 2014) quoted MSOE associate professor of history Patrick Jung as saying that in 2007, “the museum didn’t know the extent of his participation with the Third Reich.” Looking at his work with that knowledge, it becomes even clearer that his pieces glorifying German architecture, industry, and the like were used as propaganda even if that was not their intent. In addition, with many of the works in the museum created by several artists working under Hitler’s regime, the countless shirtless, muscled men depicted seem less like physiques created from honorable labor than overwrought representations of supposed Aryan superiority. It seems an odd choice to have so many works represented by these artists.

Overall, the museum is all the more conflicting because of its fascinating elements. On the one hand you can see the worth of working men and women as they toil in their chosen fields. In painting after painting, sculpture after sculpture—in those in which the men (and, again, occasionally women) who do the work are depicted—you can see the dignity of working-class people. You can see the pride in their work, just as my father and his father had pride when they painted houses. The artists clearly admire them (in fact, as noted above, the depictions of the male laborers can make the museum seem more of a tribute to the beauty of the male form than to the male workers). The artists clearly celebrate the workers they show us. The nine-foot tall statues of laborers on the rooftop garden may seem like a gigantic tribute to the workers they represent, but the reality is that the statues are lifeless replicas. The museum as a whole appears to be a celebration of working-class heroes, but in the end the celebration seems to be more about the industrialist art collector who created the space and filled it with the things he liked best.

Perhaps a museum built by workers and housing works created by tradesmen and artists who have toiled in fields and factories would more likely be a celebration of working-class people. And the museum would not be named the Grohmann Museum. Instead, it would carry a name like The Art of Labor. I would gladly pay to tour such a place. ■

This essay appears in The Milwaukee Anthology, available April 9, 2019 from Belt Publishing.

Callen Harty is the author of My Queer Life, a collection of writings on living a queer life; Empty Playground: A Survivor’s Story; and Invisible Boy. In addition, he is the author of twenty-four plays, nearly two hundred blog posts, and has published poems, articles, and essays.

Cover image of the Grohmann Museum by Jeramey Jannene (CC BY 2.0).