On a clear, late summer evening, the kind that turns the Milwaukee sky orange, I finished a bike ride along the lake and parked by a water fountain embedded in a block of concrete. The fountain greeted me with a gurgle. I’d moved to the Bay View neighborhood recently and heard about this site: Milwaukee’s last public well.

The Pryor Avenue Iron Well—so named for the high iron content in the water—sits next to the sidewalk on a quiet block of nineteenth-century homes. The constant flow of water has stained the basins of the fountain a deep rust. Some hundred and twenty feet below, water collects in layers of sand, gravel, and porous stone. Lake Michigan is just two blocks away, but the well is supplied instead by aquifers underfoot, fed by the twenty-nine trillion gallons of rain and snow that descend onto Wisconsin each year and find their way into the ground. I filled my bottle and took a sip, shocked by the cold, the taste of metal.

A van pulled up and a woman walked out carrying a grocery basket filled with empty soda bottles. She stooped to fill them one by one, and when she finished, she went to her car and returned with another set of bottles. “I’m seventy-two, and I’ve drank this water since I was a kid,” she told me. Her name was Sally, and she grew up on the South Side, not far from the well. Her father had worked for Milwaukee Water Works. Now she lives in a suburb thirty minutes away, but she returns to Bay View two or three times a month to collect her drinking water. Sally and her husband go through 1.5 gallons a day. 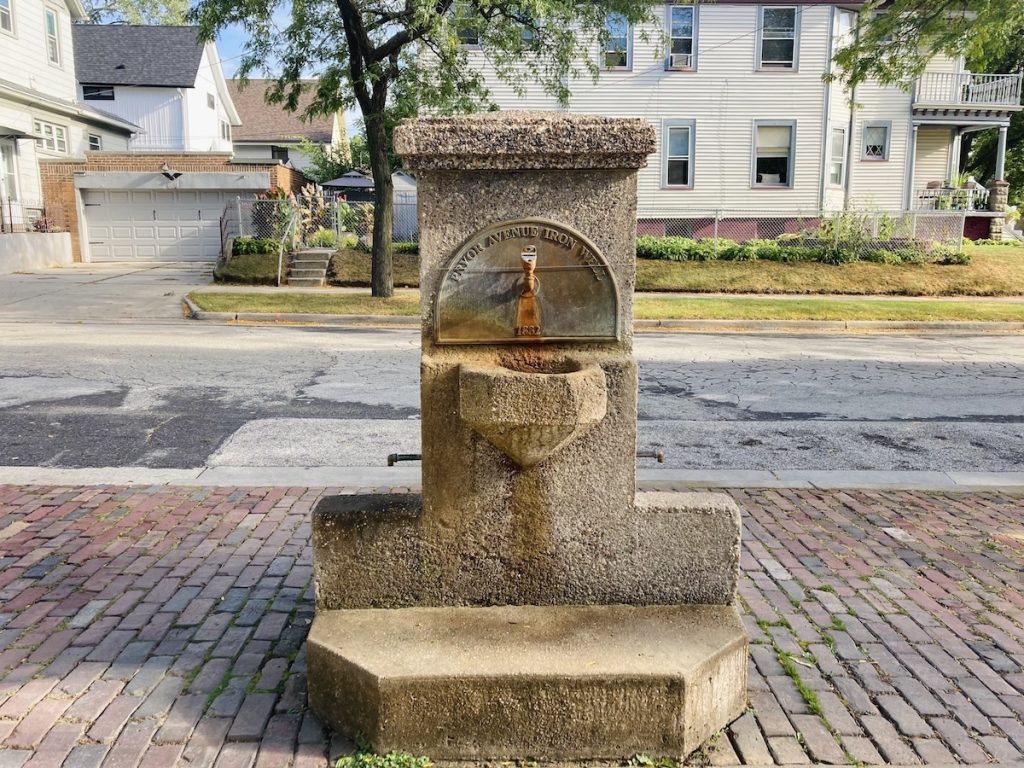 The well has many such dedicated followers—people who grew up on the stuff, who swear coffee tastes better if you make it with well water. (I’d read that an overnight sit in the fridge tames the metallic taste.) They scorn the chemicals in Milwaukee’s tap water, which comes from Lake Michigan and is treated with various filters and chemical disinfectants. (A former health commissioner has said Milwaukee has perhaps the most monitored, clean water of any city in the country, after the city revamped its system following the 1993 spate of Cryptosporidium, the biggest drinking water disease outbreak in U.S. history—during that outbreak, many relied on the Pryor Avenue well. Lines snaked down the block, Sally told me, and there was a one-gallon ration.)

Fans of the well aren’t deterred by the public health notice warning people of the water’s high levels of strontium, a naturally occurring element found in bedrock. The Environmental Protection Agency doesn’t keep a federal drinking water standard for strontium, though in 2014, it began the long process of considering whether it ought to. Instead, the well’s strontium levels exceed a lifetime health advisory—guidance intended to protect more sensitive groups over an entire lifetime of exposure. While small amounts aren’t harmful, “high levels of strontium during infancy and childhood can impact bone growth,” according to the 2015 notice.

Today’s well draws on more than one hundred and thirty years of history. Drilled in 1882, the first Pryor Avenue well supplied drinking water and fire protection to the small village of Bay View, not yet annexed into Milwaukee. In those days, it was technically an artesian well, meaning water flowed freely thanks to pressure from the rock layers below ground. The neighborhood boasted several wells, until it joined the city’s water system in the 1920s. By the 1940s, the pressure dropped and the well needed a pump to draw water.

Over time, the wells fell out of service. Eventually, the Pryor Avenue well was the only one remaining, and even its lining degraded. In 1988, the city drilled a replacement nearby. That’s the well that stands today. “It is important as a still functioning reminder of a now vanished type of public utility that was indispensable in the years before all of the houses in Bay View were provided with running water,” wrote John Ebersol to the Milwaukee Historic Preservation Commission in 1987, seeking the site’s protection.

Wisconsin is underlain by a series of aquifers, layers of porous rock that hold water like a sponge. The deeper they go, the older the rock. Two upper layers feed Bay View’s well. The uppermost layer is one of sand and gravel. Two-mile-thick ice sheets once carpeted Wisconsin. As they migrated across the land, they shuttled the crumbs of rock that form much of the surface today. Below that, a slim crescent of dolomite hugs Lake Michigan. Like limestone, dolomite is permeable, and water lives in its nooks and crannies. Under the dolomite, a hardy layer of shale keeps water in the shallow aquifer out of the deeper sandstone aquifer.

The original well descended fifteen hundred feet, beneath the shale and into the deep aquifer. Today’s well is just 118 feet deep, well within the shallows. While water from the deep aquifer emerged tens of thousands of years old, the shallower water is a spritely thirty-six hundred years old. The upper layers are more vulnerable to contamination, and the water is tested regularly.

Aquifers like those below Bay View may be a boon to climate change adaptations—if they’re managed properly. Around one-third of the world’s population depends on aquifers for agriculture and drinking water. But drought and agricultural production impair an aquifer’s ability to replenish. Intense rainfall associated with climate change in many regions can ferry pollutants and bacteria from the surface, impacting water quality.

When I first visited the well in late September, it was nearing a month-long shutdown for regular upkeep. Sally told me she’d stock up beforehand. Toasting her, I raised my bottle and sipped the ancient water—once snowmelt, rain, filtered through the wreckage of glaciers and stone. Later, at home, I would turn a faucet and water, predictably, would fill my cup. But here, life above met water below. I’d be back for more. ■

Lina Tran is a science writer. Born and raised on the Alabama coast, she now lives in Milwaukee.