In the middle of the twentieth century, industrialists tried to rebrand the coast north of Cleveland. Like many marketing ploys, it straddled the fuzzy line between aspiration and actuality.

November, 1955: An unspooling ribbon of film threads its way through a sixteen-millimeter projector in the Rainbow Room of Cleveland’s Hotel Carter. Hundreds of silhouetted heads bend toward the screen at the far side of the darkened banquet hall, to watch an eighteen-minute promotional film, commissioned by the Cleveland Electric Illuminating Company (CEI), on the complex of chemical plants that has sprung up along the Lake Erie shoreline, near Ashtabula. The narrator pitches the area as an ideal choice for further investment: Northeast Ohio, “The Chemical Shore.”

The man showing the film is Bob Heinton, CEI’s vice president of marketing, who began his career with the utility at its Ashtabula office, fifteen years back. His breakthrough came when Union Carbide Corp. (which would become a subsidiary of Dow Chemical) and its Electro-Metallurgical Corp. (Electromet) division opened calcium carbide and manganese alloy plants, near Ashtabula, in 1943. The following year, Heinton coined the slogan “The Best Location in the Nation,” in a campaign to prevent a postwar slump in electric sales once war contracts expired across “Cleveland–Northeast Ohio,” its seventeen-hundred-square-mile service area sprawling from Avon Lake to the Pennsylvania border.

Heinton’s plan was wildly successful. By 1947, all of the area’s thirty-odd major war plants, representing nearly thirty thousand jobs, had been converted to peacetime production, and CEI had decided to extend its “Best Location” marketing. Enter “The Chemical Shore.”

The Chemical Shore concept emerged in a quick succession of mid-century bids to turn Greater Cleveland into a center for electronics, missiles, and other “space-age” industries. Many of these conversations echoed Cold War chords. When Gov. Frank Lausche dedicated General Tire & Rubber’s new polyvinyl chloride resin plant, in 1954, he lauded the notion that the plant would be operated by a free people under a free government. Many of the “free people” attracted by the swelling payrolls of the area’s plants were migrants—mostly southern Appalachian whites but also, as Carl E. Feather documented in Mountain People in a Flat Land (1998), African Americans from the Deep South.

Nevertheless, the Chemical Shore, like many marketing ploys, straddled the fuzzy line between aspiration and actuality. Most of the shoreline northeast of Cleveland was not to be lined with chemical plants. The nickname referred primarily to the Ashtabula complex and another concentration in Lake County, in the vicinity of the Diamond Alkali (later Diamond Shamrock) Painesville works. These two nodes were too isolated to constitute anything warranting a grandiose name like the Chemical Shore, but they combined with development along the Ohio River to help Ohio rank third, nationally, for chemical industry expansion in 1955. And they literally helped put Lake and Ashtabula Counties on the map—of Soviet nuclear targets. 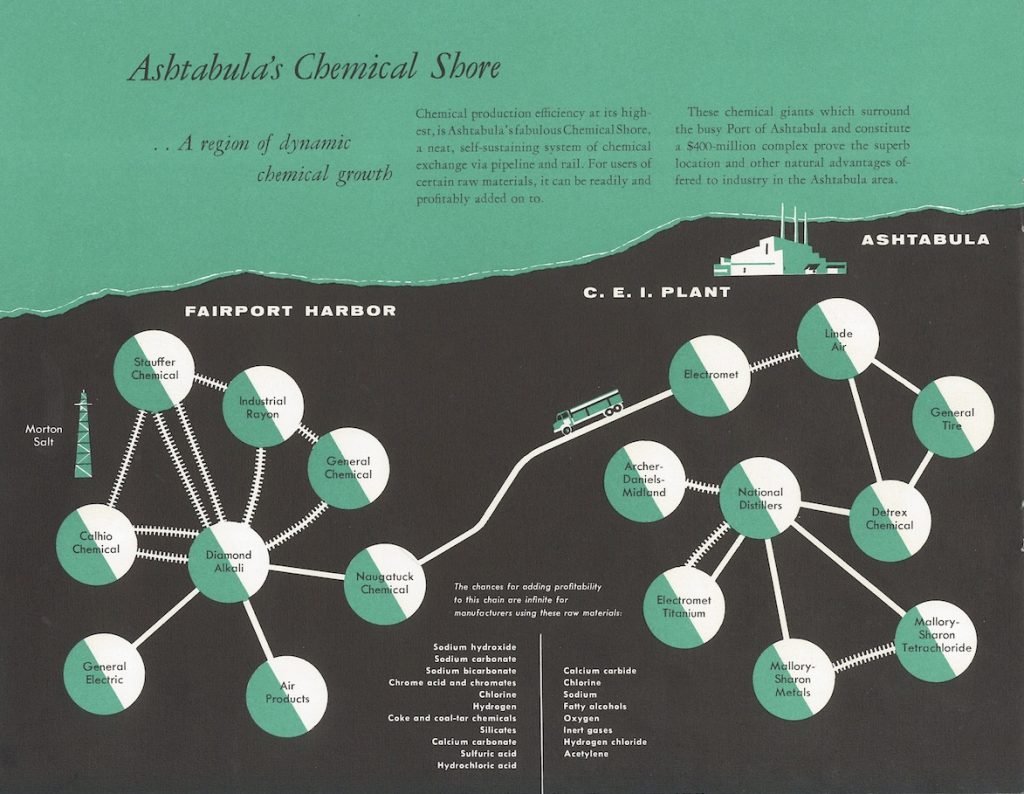 The Ashtabula and Lake County concentrations, like complexes of chemical firms elsewhere, were symbiotic. A tangle of pipelines carried hydrogen, nitrogen, oxygen, and titanium tetrachloride between various interdependent Ashtabula plants to support the production of industrial solvents, chemical additives, and polymers, while in Lake County, the Diamond Alkali “mother plant” functioned as the nucleus for a network of regional plants. The completion of the St. Lawrence Seaway in 1959 facilitated the shipment of raw materials from as far as Rhodesia and South Africa to the Chemical Shore.

But much of what happened next was hidden from public view. Observers remarked on the wonder and mystery of these raw materials passing, unseen, through tank cars and pipes, to undergo unseen chemical processes and emerge as similarly-unseen products.

The plants also released invisible byproducts that began to cloud both the skies and waterways of the Chemical Shore. Sometimes, the interconnectedness of the plants alleviated the problem. National Distillers, for example, released chlorine gas into the air for a short time, until the Hooker-Detrex plant opened nearby and needed that chlorine to produce industrial solvents. But other pollution problems required different responses. In the summer of 1956, Ashtabula residents began to complain about smog that shrouded the lakeshore. Foliage withered on trees, paint crackled on homes and automobiles, and people struggled to breathe.

Citizens demanded action, and the City of Ashtabula appointed an advisory board to study the problem. Within months, it became clear that the leading culprit was the Electromet alloy plant that Bob Heinton had lured to the city in 1943. To comply with a new anti-pollution ordinance, the company installed electrostatic precipitators to remove fly ash and other particulates that belched out of its stacks.

The air pollution problem persisted in Northeast Ohio, but, gradually, the combined effects of environmental regulation and deindustrialization began to improve air quality. By the 1970s, automation, increased competition, and other forces outside the control of local boosters were, to borrow from a Plain Dealer headline, “eroding” the Chemical Shore. The biggest blow came when Diamond Shamrock closed its Painesville works at the end of 1976. The company, based in Cleveland since 1948, moved its headquarters to Dallas three years later. Although other chemical plants continued to operate on the Chemical Shore, most—with the exception of Lubrizol in Painesville—were little more than “multimillion-dollar collections of pipes [and] valves” to people living in Lake and Ashtabula Counties. It was a far cry from the heady days in the 1950s and 1960s, when scientists and technicians recast an economy once dominated by farms and vineyards.

The Chemical Shore branding all but disappeared with the drop in chemical industry employment in the 1970s. But chemicals continued to find their way to the shores of Lake Erie. The Ashtabula River suffered mightily from decades of discharges into Fields Brook, the tributary that passed through the heart of the Chemical Shore’s Ashtabula complex. By the 1980s, the Ashtabula and its tributary were full of PCBs, lead, zinc, mercury, and even low-level radioactive minerals like radium, thorium, and uranium. The effluent of chemical plants coursed through the watershed, gradually building up drifts of toxic sludge more than fifteen feet thick, which clogged the river’s mouth; geese could walk across the drifts, and at least one large ship was caught up in them.

Greenpeace activists called attention to the river’s pollution. In 1983, Fields Brook made the Superfund list of the nation’s most toxic waterways, and in 1993, the State of Ohio issued an advisory against eating fish caught in the Ashtabula River. A year later, with Fields Brook remediation underway, the Ashtabula River Partnership was created. It pulled together state and federal governments and area industries to undertake a voluntary cleanup of the Ashtabula. In 2006, after more than a decade of planning, a five-year, $62 million dredging project launched a river cleanup. By 2014, the U.S. Environmental Protection Agency no longer designated the Ashtabula as an “area of concern,” but Fields Brook remains on the Superfund list and is due for its next review in 2024.

Over the past two decades, communities from Fairport Harbor to Ashtabula have worked to entice more tourists to the shoreline of Lake Erie. From a marketing perspective, the Chemical Shore is no more. But its legacy lingers in those whose families lived and worked in Lake and Ashtabula Counties; “maze[s] of pipes and tanks” still standing; and, as always, in the water. ■

J. Mark Souther is a professor of history at Cleveland State University and the author of Believing in Cleveland: Managing Decline in “The Best Location in the Nation.” You can follow him on Twitter@marksouther.