Not Just Another Soup Kitchen: Inside the Flint Community Cookout

“Hey, man, he got a spot,” says Kenny Lucas, pointing his thumb toward Dallas Schiestel, as another man joins the growing party in Riverbank Park, waiting for the Flint Community Cookout to begin. It is just past noon, the warmest it will be all day, and the temperature hovers just above freezing, but they are not strangers to the cold. Lucas once had a toe amputated and, after being released from the hospital and turned away from full shelters, took refuge in the parking ramp across the street from where he stands now. There he and Schiestel slept in the windless spots that could be found on the second and fourth floor until word got around and the newcomers drew enough attention to get them all booted. Schiestel, a do-it-all handyman and remodeler, when he can find work, had put together a small place under a nearby bridge with a handful of mattresses the previous spring. There a sort of common law took over. Anyone was welcome so long as they didn’t cause problems or draw attention. Even the addicts who slipped under the bridge to do their drugs were fine with Lucas and Schiestel, so long as they kept to themselves. But when people get too rowdy, Lucas and Schiestel kicked them out. 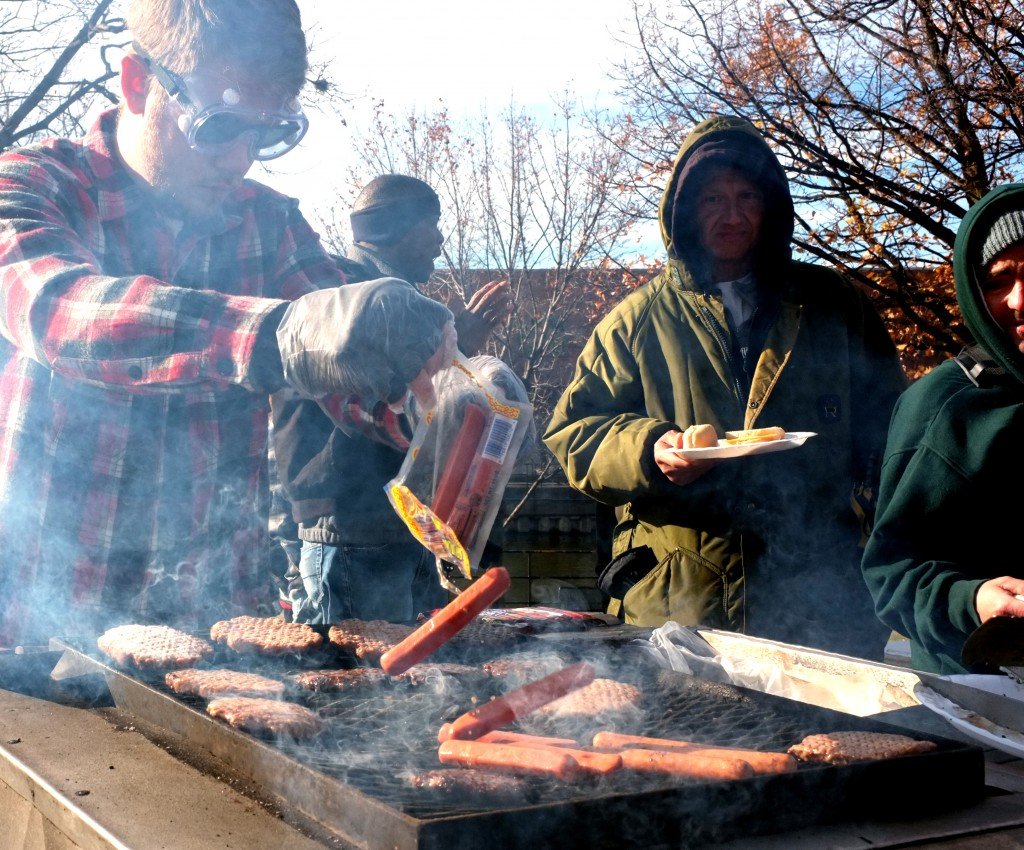 The two know each other well. Lucas has recently turned 50, a fact that Schiestel regularly points out, and they make jokes about the misuse of taxpayer dollars when Lucas shares cigarettes with the group. They still see each other around, but Coulter now has his “spot” — a home, a place with walls, a bed, a shower, the kinds of thing you dream about when homeless, and Lucas shares the news with a congratulatory tone, the same kind of excitement any friend might for someone who bought a new house, a new car, or just found a new job. It’s the kind of small talk the rest of the world never hears, except on the fourth Saturday of every month, on the edge of downtown Flint.

Does the cookout start at noon or one? They talk about it. It’s after noon, so it must be one, because since it started up about five years ago the Flint Community Cookout has never failed them. These are men who know the cold, and perhaps that, more than anything, is why they’re so impressed with the people who show up moments later with an enclosed trailer full of burgers, hot dogs, cookies, and a gas grill. 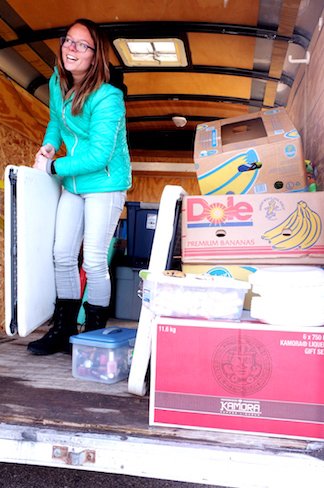 Sarah Schuch unloads the trailer full of food and equipment for the Flint Community Cookout Nov. 28, 2015.

The men talk about the people who bring the food and, having brought it up, realize they don’t know much about them.

That’s because the people with the food are not from any church in particular. It’s an easy assumption to make, given that so many of the places to find a meal or a place to sleep around town are attached to a church. But while the Flint Community Cookout is primarily organized by young people involved in the church community in some way — they say a blessing before the meal and the guy who brings his guitar sings about Jesus — it’s not supposed to really be about that. It’s supposed to be about eating some food, no matter if you see a parking ramp as a place to park your car or a place to sleep.

“It’s not an official group or anything. It’s just a thing,” says Sarah Schuch, who has been one of the cookout’s organizers for the past three years. They work through a local nonprofit, Good Justice, but that’s only to handle logistics. The event was started by a group of college students and young adults who had seen similar cookouts in Detroit — places where anybody — young or old, housed or homeless — could come out for a picnic.

“It’s not a feeding program, it’s not just, ‘hey, let’s go feed the hungry,’” she says. “It’s simply a group of us getting together, sharing a meal, talking to each other, understanding each other, maybe meeting people who come from different backgrounds.”

[blocktext align=”left”]“It’s not a feeding program…it’s simply a group of us getting together, sharing a meal, talking to each other, understanding each other, maybe meeting people who come from different backgrounds.”[/blocktext]When they arrive many of the people waiting approach the trucks to start helping out. They set up the grill, tables, and lawn games — bean bags and a giant Jenga set. It’s hard to tell for a moment who is an official volunteer and who has shown up to eat because there technically are no official volunteers. It’s just a cookout. Schuch and her crew provide the basics — hot dogs, burgers, cookies, bags of potato chips. But others show up as well with casseroles and other potluck dishes. That’s part of the idea, too. They don’t want to provide everything. It’s supposed to be a community effort. Based on the number of burgers cooked, Schuch estimates that between 150 and 200 people showed up this time. In the summer, that number can get as high as 400.

One of those people is Cameron Simpson, who after helping set up tables for food, hopped in the back of the line to get a burger and a hot dog. He’s friends with many of the organizers and works downtown, the former manager of a local restaurant and current employee at a new market. Is he involved in the group? That depends on the day. 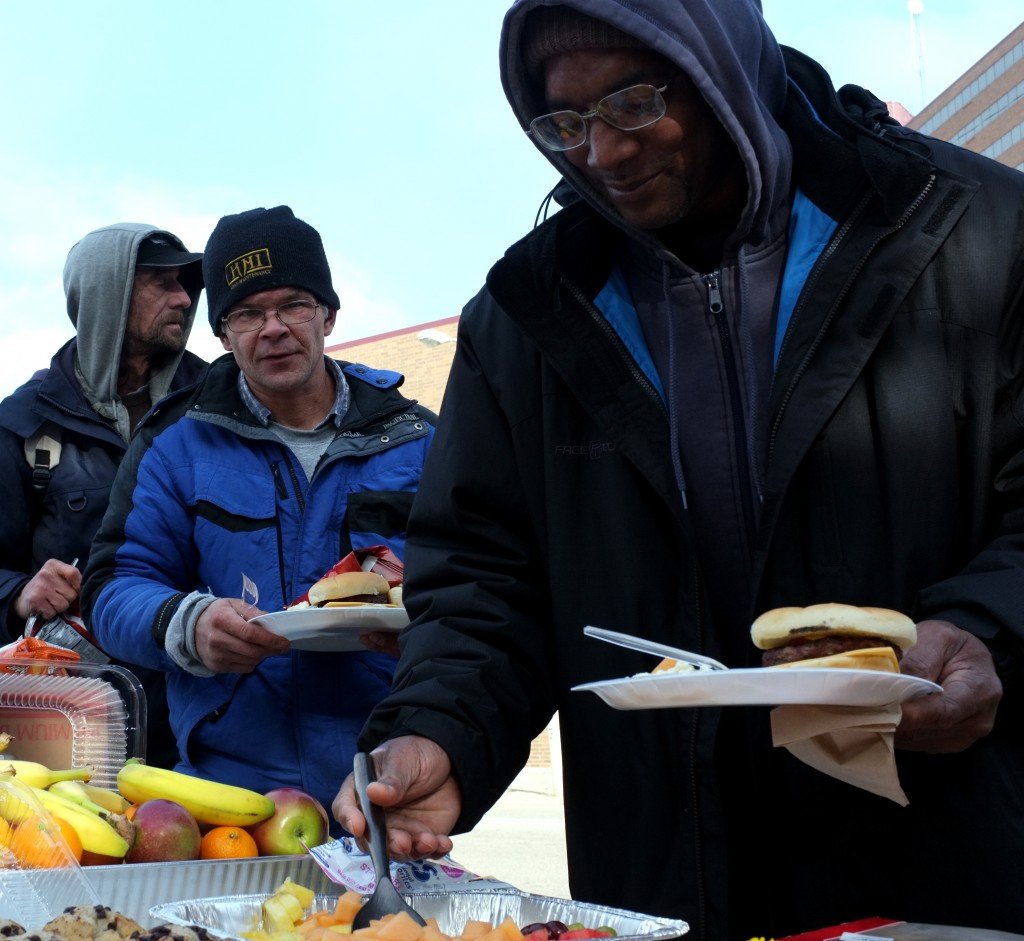 From left, Kenny Lucas, Jeff Nowry, and David Coulter help themselves to some food during the Flint Community Cookout Nov. 28, 2015.

Some of the regulars may not have caught on to that mission, however. It’s cold, they’re hungry, and the lawn games are nice, but this is one more place to get a meal.

“Some people come here who aren’t even homeless,” Lucas says before the trucks arrive.

To completely fulfill its mission, the Community Cookout might need more people like Simpson. Schuch says many of the people who aren’t homeless who show up do so with the intent of helping out — good intentions, and welcome, but she also wants people to know that it’s fine to show up just to eat and be social. There’s no expectation that guests must stand behind a table ladling. In fact, it’s set up so there aren’t too many people handing out food (people are capable of serving themselves their own food, Schuch says). She wants guests to know it’s fine just to come and eat, to play some giant Jenga, meet someone new.

The location of the cookout is itself symbolic. It’s held at Riverbank Park (currently the event takes place at the far end of the park while the main area is undergoing renovations), an area that marks the northern border of downtown Flint. Downtown is a more affluent part of town, where private security guards stroll the streets and people from the suburbs will now come for a night out. Walk only a few blocks to the north, and things change. Houses are boarded up or toppling over. Almost all of the crime Flint has become known for happens in outlying neighborhoods. Even though the influence of downtown Flint’s comeback is spreading, the Flint River is still often seen as a dividing line between safe and unsafe. The idea of the cookout is in part to forget about boundaries, physical or literal — between the homeless and the housed, between rich and poor, to let the river just be a river again — and why not over a burger? 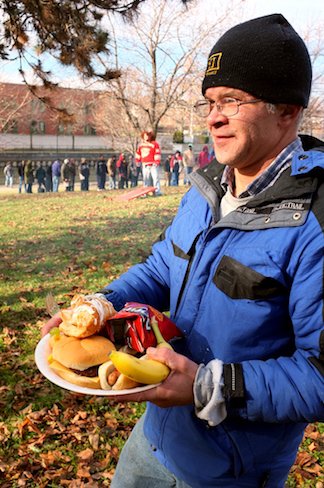 Jeff Nowry looks for a place to sit and eat during his first Flint Community Cookout Nov. 28, 2015.

Darren Barber, 47, lives in an apartment near the park and said the state had reduced the number of food stamps he receives, so he spends a lot of time wandering between soup kitchens and other places he knows he can go for a meal. “If somebody comes down here and says they’re hungry, I’ll slap them,” he says, and laughs. “There’s too much food, free food around here.” After walking off once with a grocery bag full of food toward his apartment, he’s returned, this time carrying a plate piled high with a burger, hot dog, and plenty of cookies. Running out of food, Schuch says, has never been a problem, and everyone takes as much as they want. Back in the line, organizers pass out empty hot dog bags for people to carry food with them.

In time the activities reach their height. College-age people are playing Jenga; a second guitarist has started serenading the people scattered about eating where they can, benches or pieces of playground equipment. It’s hard not to notice that the people playing Jenga or hanging out with the musicians are the same people who brought the food, and that the people gathered together eating are the same who were waiting before the food arrived. But people are eating. They’re talking and laughing. When things are running smoothly Schuch takes her place at the back of the line, waiting her turn for a burger and a turkey-and-cranberry casserole she’s never had before, which she takes to a bench at the edge of the park. Before she’s finished a man with traces of ketchup and mustard in his beard sits down next to her with an empty plate.

Scott Atkinson is a freelance writer based in Flint, Michigan. For the past several years he has been an award-winning features writer for The Flint Journal. He teaches writing at The University of Michigan-Flint.

All photos by Scott Atkinson