Without a permit from Ohio EPA, a major gas processing facility threatens a family farm

The perfect farm life that Pete and Micki Rockenhauser had crafted for themselves and their four-year-old son, Little Pete, in rural eastern Ohio was ruined earlier this year when an Oklahoma energy company razed the fields and woods beside their 120-acre Jefferson County homestead to clear space for a gas processing facility.

“It’s just crazy that this company, which isn’t even from here, gets to take our life away,” said Pete Rockenhauser, of construction that began in March and has included massive machines felling and grinding apart trees, excavating earth, and scores of dump trucks expelling large quantities of diesel smoke.

“In a matter of months, we went from living a dream to living a nightmare.”

The young farmers now begin each day by observing the fleet of dump trucks and excavating machines pounding the earth just 500 feet from their home, and at times rattling their windows. Over a breakfast of oatmeal and fruit, the family pondered how by the end of the summer the adjacent construction will have likely metastasized into a fully operational processing facility for fracked methane brought in from the surrounding countryside. Such CDPs, or central delivery points, emit an array of toxic chemicals, including known human carcinogens, which would threaten the Rockenhausers, as well as the fields of alfalfa and ryegrass that Pete Rockenhauser’s family has farmed since his grandfather first purchased the land in the early 1960s. “In a matter of months, we went from living a dream to living a nightmare,” said Micki Rockenhauser.

Last week, Belt Magazine learned that the company behind the project, Utica Gas Services, a subsidiary of Oklahoma-based energy company Williams, commenced construction without the proper air permit from the Ohio EPA, despite the agency being clearly aware of the project for some time: Alex Del Valle, an officer with the Ohio EPA’s Division of Surface Water, has visited the site at least once, and the Rockenhausers said they’ve been in touch with other officers at the agency who have assured them that the project is moving forward in an appropriate manner. Nevertheless, when asked in a phone conversation on Friday if Williams had received the appropriate permits for the project, Ohio EPA media relations manager James Lee said, “I do not believe that that’s the case.” When asked if it was standard operating procedure for the Ohio EPA to allow major industrial projects to move forward without permits, Lee said, “What I am going to encourage you to do is put your questions in an email.” Belt did so, and in a follow-up conversation, Lee confirmed that the air permit had not yet been granted but said it was standard for an applicant to begin site clearing, site preparation, and other steps in advance of building the actual facility without having yet received the appropriate permits. “That is common practice,” said Lee, “and in fact if the permit needs to be changed, or ultimately a permit is not granted, an applicant has done that work at their own expense and their own risk.” 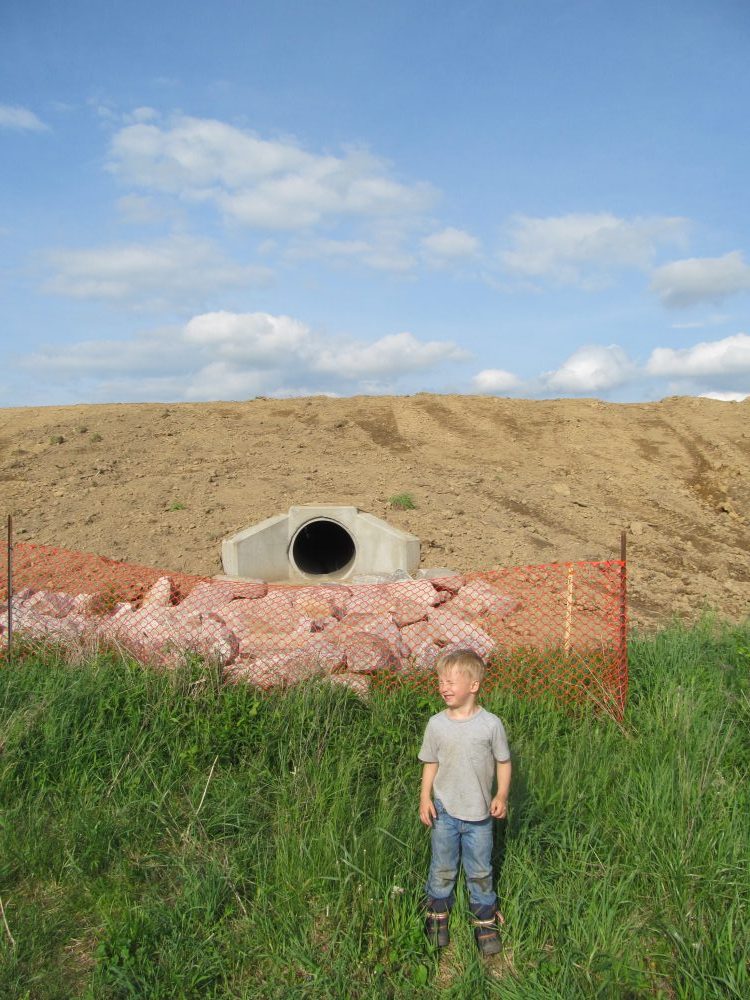 But that is to say nothing of the risk that the construction site poses to the Rockenhausers’ farm. According to Pete Rockenhauser, the energy company installed a pipe to drain its construction site directly onto the Rockenhausers’ land. During rainstorms the couple watches in horror as the pipe vomits a gray silty rush of water across their hayfields and into their pond. Once a pristine spring-fed sanctuary that nourished their cows as well as a rich community of frogs and birds, the pond is now choked with sediment and has taken on an oily sheen. Runoff from the farm eventually drains into Yellow Creek, a highly valued local waterway populated with an at-risk ancient salamander species called the eastern hellbender. Thinking the state of Ohio might have concern for the salamanders — if not the lungs of their four-year-old — the Rockenhausers have repeatedly approached the Ohio EPA, assuming that the energy company must be violating some sort of law.

“Ohio EPA does not regulate drainage issues unless there is a specific water quality threat to waters of the state,” said Ohio EPA’s Lee. He added that “pipeline projects are exempt from obtaining storm water permits.”

On projects across northern Appalachia related to unconventional oil and gas development, i.e., fracking, it is a common enough tactic for companies looking to quickly install large industrial projects, especially ones that entail numerous toxic emissions, to commence construction and then obtain the permits, said Ted Auch of FracTracker Alliance, a nonprofit with a mission of informing the public of the risks associated with oil and gas development. “With money invested on the ground,” he said, “it’s less likely that a project will be rejected.”

“We are dealing with a broader political system that for years has heard the voices of larger industries over the voices of smaller farmers.”

That the state’s very own EPA has what appears to be absolutely no regulatory control over an out-of-state energy company with an atrocious safety record confirms a brewing concern among some Ohio citizens that the oil and gas industry has completely captured the state’s regulatory agencies, as well as a number of state lawmakers.

“The Ohio legislature has cut out citizens,” said Teresa Mills, executive director of the Buckeye Environmental Network. Whether it be a frack pad, an injection well, a compressor station, or a gas processing plant, Ohio citizens have no opportunity to oppose a project, she said. “Companies don’t have to post an ad in the paper, they are not required to have public hearings, there is nothing. Ohio residents have no say on what the fracking industry can do in their backyards.”

Unfortunately, say oil and gas industry watchdogs, the processing facility being constructed next to the Rockenhausers’ farm is part of a larger infrastructure buildout in the region meant to accommodate an ever growing fracking industry in northern Appalachia.

“There is going to be more and more need for large infrastructure to dry out this gas and that’s going to mean projects with multiacre footprints, like what’s going up beside this family’s farm,” said FracTracker’s Auch. “My heart goes out to them, they are going to be surrounded by gathering lines and once they are surrounded the company will look to make an offer on their house, and by that point the family will be looking to get the hell out — I mean, there is a game plan here, there is a formula.”

But the Rockenhausers are deeply attached to their land, and say they’re not about to move anywhere.

“They don’t understand,” said Pete Rockenhauser, whose grandparents’ ashes are scattered beside the rose bushes in the garden. “This is our temple.” 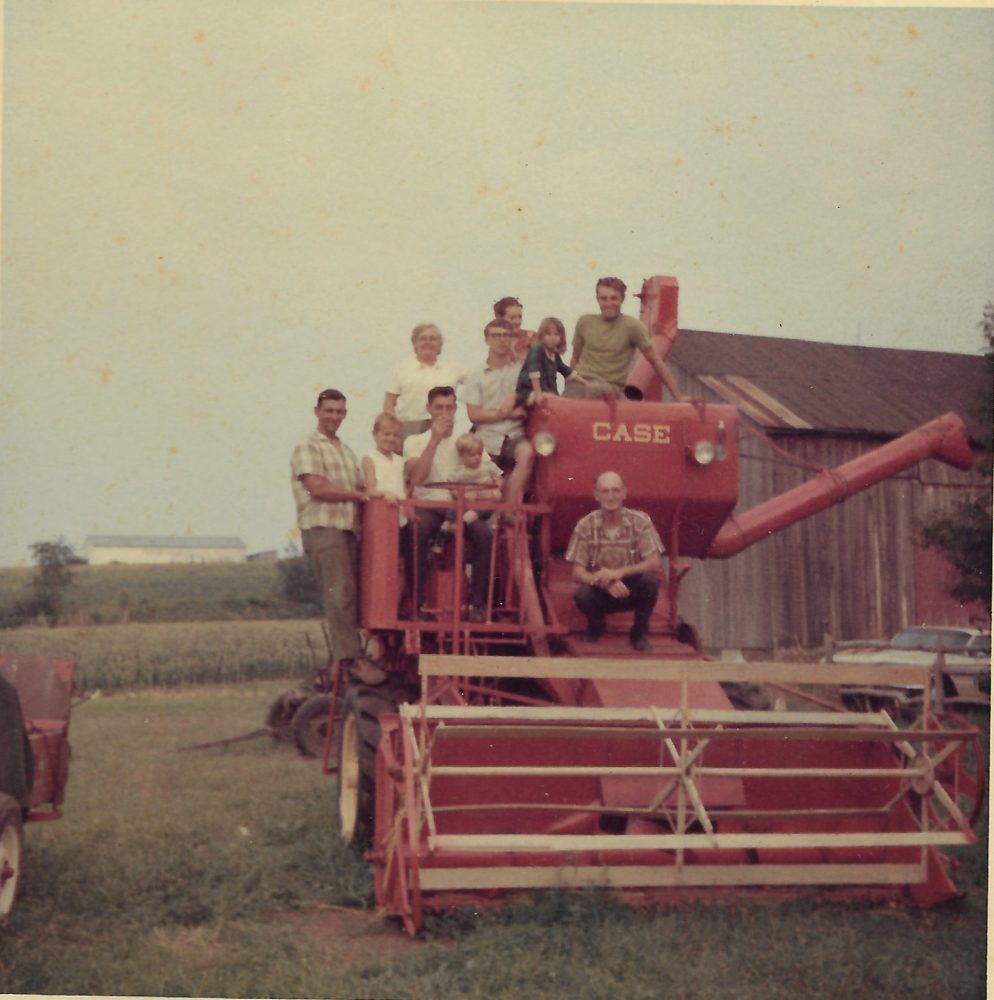 Peter Rockenhauser’s family has been farming this land for three generations.

On the day I visited, inside the Rockenhausers’ home, Little Pete could be seen walking around with a baby chick nicknamed Flower Jack on his shoulder — the posterboy for a happy farm child.

“He’s got to be the healthiest kid in the world,” said his father. “In berry season he’s permanently stained — he goes from a dark purple mulberry to a light purple raspberry.”

Later in the day, out in the family’s barn, Little Pete fed the goats.

“We’re really friendly to our animals,” said his father. “You could just go into our barn and hug a cow — one day I actually fell asleep on a cow.”

The idyllic scene, however, grows bleaker by the day.

“I don’t even like going into our fields anymore because I can’t look at what they’re doing,” said Micki Rockenhauser. “I break down uncontrollably, I cry out of the blue — it is just awful impending doom, and we just know that this is going to get worse and worse.”

Holly Rippon-Butler, land access program director for the National Young Farmers Coalition, an organization dedicated to raising the voice of young and new farmers, has seen this scenario before, albeit with other industries. “The odds are stacked against you,” she said of farming families like the Rockenhausers. “We are dealing with a broader political system that for years has heard the voices of larger industries over the voices of smaller farmers.”

Justin Nobel has written for such publications as Rolling Stone, Oxford American, National Geographic, and Longreads.com. Follow him on Twitter @justinnobel.