Ohio’s impending Stand Your Ground law will protect shooters who claim self-defense; if they’re white, according to opponents

A controversial gun bill is likely headed for a floor vote in the Ohio House this week, according to newly minted Ohio House Speaker Ryan Smith, and is expected to become law with enough support to override an expected veto from Gov. John Kasich.

As a so-called “stand your ground” bill, House Bill 228 would be the country’s first pro-gun rights legislation to advance to a floor vote since the mass shooting more than four months ago in Parkland, Florida, which changed the politics surrounding the gun control debate. Post-Parkland, the likes of Kasich and other Republican officials have adopted more moderate stances on gun legislation. Contrary to supporting a stand your ground (SYG) measure — which would allow Ohioans to use lethal force if they “reasonably believe” it to be necessary to avert an attacker’s threat — Kasich wanted the Ohio legislature to pass a package of “sensible” gun control bills. HB 228 is not only moving Ohio in the opposite direction, but is also moving the gun control debate in the Buckeye State away from the politics of bump stocks and mental health and toward racial inequity in the law.

Racial inequity in Stand Your Ground laws does not stop at innocent black shooting victims whose killers can go free, but extends to African Americans on the other side of the gun with legitimate claims of self-defense.

According to many SYG opponents, racial inequity in such laws does not stop at innocent black shooting victims, whose killers can go free and, some would argue, are emboldened under SYG measures; but extends to African Americans on the other side of the gun with legitimate claims of self-defense.

Siwatu-Salama Ra is one such claimant who’s currently behind bars in Michigan, a SYG state. Ra, a black woman and prominent environmental activist in Detroit, was arrested last July following an incident with a woman in her mother’s driveway, where Ra’s car was parked with her then-two-year-old daughter inside. According to Ra, the woman, irate over a long-running dispute between her daughter and Ra’s niece, began using her car as a weapon, threatening to charge at Ra and her family and at one point actually slamming into Ra’s car. In an effort to fend off the attack, Ra, a licensed gun owner, removed an unloaded handgun from her car’s glove compartment and pointed it at the woman.

“She was just doing whatever she could to get this crazy woman to leave,” Ra’s mother, Rhonda Anderson, told Belt Magazine. “We were afraid for our lives.”

Despite her self-defense claim, Ra was still charged over the incident. In February, at six months pregnant, she was convicted of felonious assault and sentenced to two years in prison.

For critics of SYG laws, Ra’s case stands out as a glaring example of the racial inequity in how such laws are applied. There’s nothing inherently racist in the text of the laws; the problem, rather, lies in interpretation: When it’s left up to juries to determine what constitutes a justifiable shooting, existing racial prejudice is inescapable.

Anderson said as much when it came to Ra’s trial, where the prosecutor showed the jury photos of Ra taken by her alleged victim after the incident. Ra, in the eyes of the jury, did not appear scared enough. 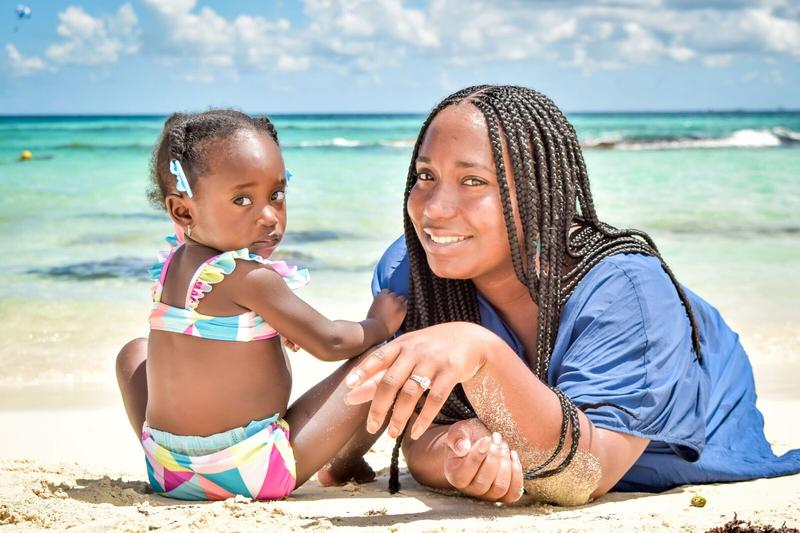 Siwatu-Salama Ra and her daughter on a family vacation before the incident that landed Ra in prison.

“The idea that black women [can be] afraid or have any other emotions — express emotions other than anger,” Anderson said, “is just kind of new to people.”

Gary Daniels, chief lobbyist with the ACLU of Ohio, said that bias in the criminal justice system against people of color goes beyond policing. “In a pure sociological sense, we know that people of color are oftentimes, unfortunately, seen as more dangerous … and that bias can carry over into juries’ [verdicts],” he said. “So when you have that kind of atmosphere … and then you combine that with an expansion of the Stand Your Ground laws, it’s a very dangerous recipe.”

The data on the matter is stark. A 2012 study by researchers at Texas A&M University found that SYG laws did not deter crime; instead they actually increased the number of total homicides by 8 percent. A 2013 Urban Institute study by John Roman, which analyzed FBI crime statistics from 2005-10, found the laws, while broadly increasing the percentage of homicides that were deemed justifiable, were associated with dramatically different outcomes depending on race.

Said Daniels: “I don’t think there should be any expectation that Ohio is somehow going to be different than what we’ve seen in these other states.”

Ohio is actually already considered a limited SYG state: In 2008, the state passed a “castle doctrine” law that clarified that someone inside his vehicle has no duty to retreat from a threat before using lethal force. (Everywhere in the U.S., self-defense laws provide for “reasonable force” against a threat encountered inside one’s home.) Ohio’s HB 228 would expand the location where no duty to retreat exists to public spaces. Among other sweeping gun-rights provisions, like a clause that cities can’t write their own gun laws, the bill would also reverse the judicial burden of proof in SYG cases: Under current Ohio law, the defendant — the shooter — carries the burden of demonstrating they were in fact facing a threat before shooting. Under HB 228, the shooter is presumed justified unless a prosecutor is able to prove they were not.

“We all learned in school that you’re innocent until proven guilty,” Jim Irvine, board president of the Buckeye Firearms Association, a high-profile backer of the bill, told Belt. “But if you are the victim of a crime and you exercise your right to self defense, Ohio has it backwards. You are guilty and you have to prove yourself innocent. And that’s just fundamentally wrong.” (The bill was sponsored by Republican representatives Terry Johnson, from McDermott, and Sarah LaTourette, from Chesterland. Neither legislator responded to Belt’s interview requests.)

HB 228 supporters’ arguments are largely framed on defending the civil rights of the shooter — the perceived victim of an attack — with little mention of the bill’s potential racial implications. But Irvine argues that low-income minorities actually have the most to gain. “I’m white, I live in the suburbs, I have a pretty good job,” he said. “So if I get into one of these situations I can afford an attorney.” But a low-income person facing the same charge, he argued, doesn’t have the resources to mount a sufficient legal defense, and therefore benefits from a law that makes it harder to prove wrongdoing.

“It’s helping out our most disadvantaged people more than it’s helping out somebody like me,” he said. “Yes, there’s a racial bend on this stuff, but it goes 180 degrees opposite of what others are trying to make it out to be.”

Earlier this year, HB 228 appeared to gain legislative traction, prompting multiple committee hearings. It also sparked widespread opposition, including from the Ohio Association of Chiefs of Police, who worried about increased hostilities, and the Ohio Prosecuting Attorneys Association, who are concerned the burden-of-proof reversal will amount to a gap in rightful convictions. Others pointed to the gun lobby’s sizeable influence and, given the dearth of evidence in support of SYG laws, questioned the need for such a bill in the first place. “Legislation is supposed to serve the purpose of solving a problem,” Maureen Washock, with the Ohio chapter of Moms Demand Action for Gun Sense in America, told Belt. “I do not see the problem that is being solved by Stand Your Ground.”

On May 21, Ra gave birth to a baby boy, Zakai, at a Michigan hospital under confinement. Under state prison policy, normally the baby would be removed from the mother after 24 hours, but because of health complications Ra stayed with her child an extra day. Then he was turned over to her husband. Zakai is healthy, Anderson told me, but Ra — who is only permitted eight total visits per month — has been struggling with depression, and the ordeal has taken a toll on the whole family.

“It is a continuous nightmare that we just can’t seem to get out of,” Anderson said. “And it’s the whole thing around, ‘Why? Why is she going through this? Because she attempted to protect her family?

“The whole idea of being allowed to stand your ground,” she continued, “why wasn’t that applied to us?” Anderson didn’t need to answer her own question, but she did anyway. “She’s black.”

Belt Magazine is not-for-profit and member-supported. To support more independent writing and journalism made by and for the people of the Rust Belt, make a donation to Belt Magazine, or become a member starting at just $5 a month.