In the Ohio Valley, more farmers are harvesting maple syrup, a practice that dates to before the arrival of Europeans.


When Seth Long first began experimenting with maple syrup production, he tapped hollow pegs called spiles into individual trees, collected drips of sap in milk jugs, and carried each gallon down the the steep mountainside on foot.

Now, Long rides an open-air buggy up muddy switchbacks to a five-hundred-gallon collection tank from which translucent blue tubes branch out like arteries. There, gallons of sap accumulate from Long’s 270 maple trees before they flow through those tubes nine hundred feet down the mountain to Long’s grant-funded sugar shack. A shared-use reverse osmosis machine removes most of the water before the sap enters the evaporator to boil for hours until it turns into thick, dark maple syrup. “Some of the sap is travelling twenty-four hundred feet before it gets down to our evaporator,” Long said.

Collecting sap the old-fashioned way, fourteen gallons of sap was a big day, Long said. Now, three seasons into mechanized production, Long estimates his network of tubes, tanks and gauges can process eight hundred gallons per day. “When we were introduced to the tubing, it kind of changed everything,” Long said. “Now I can get sap off that tree up there way on that hilltop and never touch it until it’s down at the evaporator.”

Long is the president of the Kentucky Maple Syrup Association, a year-old group of maple syrup producers hoping to put the sweet concoction on the map in the Bluegrass State. Long and his wife Sheryl run the fifty-acre SouthDown Farm in Letcher County. The pair sells vegetables, jams and baked goods at local supermarkets and to individual buyers. Long said that in 2018, with two hundred taps operating, the family produced about $3,200 worth of finished maple products. It’s far from enough to sustain a family, but it’s extra income at a time of the year when not much else is happening on the farm.

“What we’re doing here in eastern Kentucky with maple syrup is kind of calling back a distant memory,” Long said. He and other maple producers in the region view maple syrup as more than just another crop. For them, it’s one sweet part of a new, decentralized economy that’s capitalizing on a long tradition. 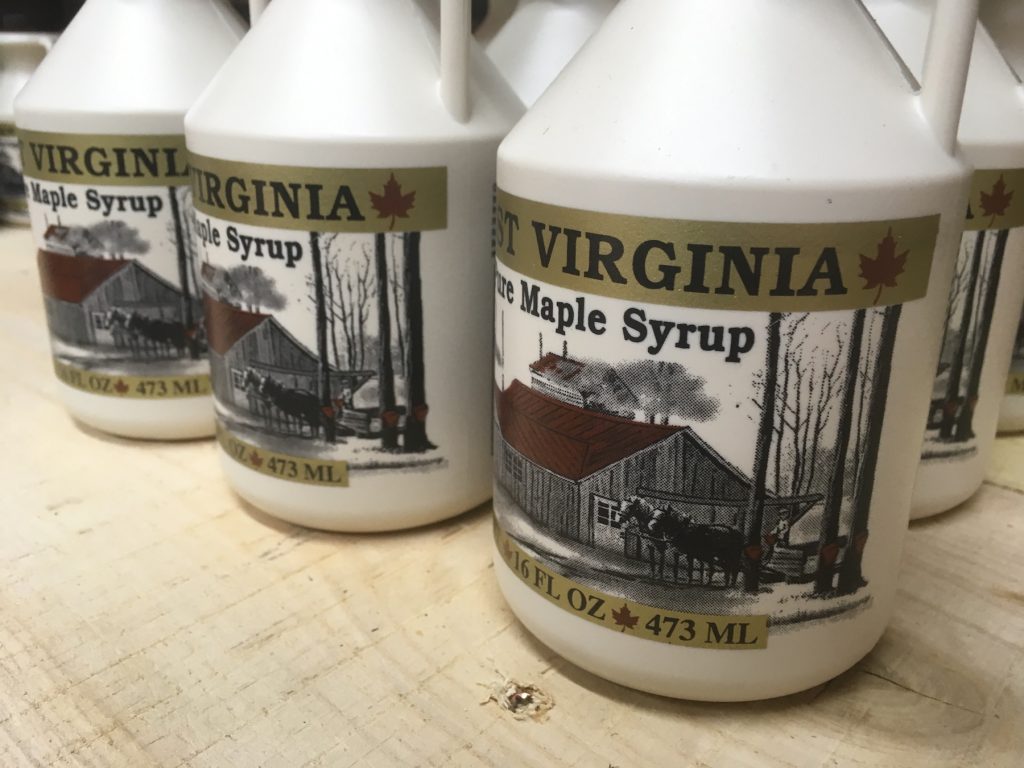 Appalachia has a deep history of small-scale agriculture, from regional crops like sorghum to the cultivation of heirloom beans. Historians say maple production in the Ohio Valley dates back to Native American communities tapping maples long before the arrival of Europeans. Ohio Valley residents regularly tapped maples for personal use through World War II, when sugar rations made syrup a valuable commodity.

“Some of that has been lost,” said Kathlyn Terry, executive director of Appalachian Sustainable Development.  “I’ve heard people share, ‘I’m not ever breaking beans. I’m not going to do it, because I don’t have to.’ And that was a sign of success, that you didn’t have to.”

Appalachian Sustainable Development is a nonprofit organization that uses agriculture as a means of economic development in the Appalachian region. Terry said she’s excited about the potential of non-timber forest products for hilly, forested regions like eastern Kentucky and West Virginia. Maple syrup is a non-timber forest product, as are herbs, ramps, and mushrooms.

Terry pointed to a revival of traditional agriculture and a new appreciation for Appalachian cuisine, with books like Ronni Lundy’s “Victuals” giving renewed importance to traditional foodways. “Now we’re seeing people recognize, ‘Wow, we really lost something by stepping away from that.’ And in addition to losing the skills and the knowledge, they lost a connection to their history.”

SouthDown’s Seth Long agreed. “They did it in the old days out of necessity. What if we did it as an economic driver?”

Long’s maple stand sits atop an old surface coal mine site. Maple trees are faster-growing than some other local tree species, so they’re often the first to reach maturity on abandoned mines. Long finds satisfaction in doing small-scale agriculture on land that was once home to an extractive industry.

Long said even a few decades ago, most people dismissed farming as unnecessary in eastern Kentucky, but now there was more openness to a diverse economy. “This is something we can do that can make a real difference, that can have a real economic impact to the region.”

Northeastern states like Vermont, New York and Maine produce the vast majority of American maple syrup. Ohio produces far less, but still consistently ranks among the top maple-producing states in the country, with 708 producers reporting in the last agriculture census. (Experts say there are likely far more small-scale producers, since they are less likely to be counted in official data. All that makes tracking maple production a particular challenge.)

West Virginian producers are building an agritourism economy around the novelty of the seasonal crop. And producers in Kentucky are just beginning to explore how big maple could be. Shad Baker, the agriculture extension agent in Letcher County, Kentucky, was always looking for ways to make the best of eastern Kentucky’s hilly, forested terrain. He knew that agriculture in Letcher County would never be large-scale, high-volume production, but rather multiple niche crops that didn’t need much flat land.

“My mom worked in the mines,” Baker said, “And we had this old mining sticker that said, ‘A bird in the hand is worth two in the bush.’ Well, maple syrup is a great example of a bird in the hand.”

Although Kentucky and West Virginia are not traditional maple country, the particularities of the landscape make the crop an unlikely fit. The steep grade means there’s no need for the costly vacuum systems often used in more traditional maple states like Vermont and New York.

Sap flows when the days are warm and the nights are cool, so Kentucky and West Virginia have a longer production season and more frequent freeze-thaw cycles. And, Baker said, maples release sap in January and February, a time when a small farm operation wouldn’t traditionally be able to turn a profit.

“I always tell people they can put a TV in their sugar shack and watch UK basketball while they evaporate,” Baker said with a laugh.

There are downsides. Appalachia’s impressive biodiversity means maple trees are more spread out among other species, requiring more effort to connect them to one another. And critically, sap from maple trees in Appalachia has a lower sugar content than sap from trees in traditional maple country, which means producers have to spend much more time boiling the sap or invest in an expensive reverse osmosis machine. A particularly low-sugar season can devastate profits.

In rural Letcher County, with its population of about twenty-two thousand, Baker estimates there are about eight producers in the county alone who were on their way to having commercial-sized operations, which is generally understood to be five hundred taps or more. As many as twelve more pursue maple syruping as a hobby, and that’s fine, Baker said. Maple syrup doesn’t have to be for everyone. “It’s better for us in the long run if we’re diversified,” he said. “That way if the market changes or you lose your competitive advantage, then you’ve got other things to fall back on.”

Baker teaches maple producers to make value-added goods like maple candy, which can triple the value of a gallon of syrup. His office has purchased processing equipment to help producers make syrup at scale without investing too much money up-front. He wants to encourage hobbyists just as much as professionals like Long. “Maple syrup could easily be fifty percent of the ag output in Letcher County,” he said.

Across the state line in West Virginia, maple producers have capitalized on maple syrup’s niche appeal to create Maple Days, a popular agritourism event where farmers across the state open their doors to share their knowledge, sell their goods, and spread excitement about the new industry.

At Flanigan Family Maple in Prichard, West Virginia, Rich Flanigan has scaled up from a few hand-tapped trees to a 470-tree operation, and plans to grow to a thousand taps next season. A full-time forester for a land-management company, Flanigan processes sap on nights and weekends during maple’s short production season. In a full day, he could process up to two thousand gallons of sap, or roughly fifty gallons of syrup.

At Flanigan’s Maple Day open house, visitors mill about, peering into Flanigan’s evaporator and gushing over samples of homemade maple pies and cookies. Flanigan takes guests on tours of his operation. But the most exciting attraction is the cotton candy machine, where maple sugar enters and puffy clouds of spun sugar emerge. The machine has paid for itself multiple times over, Flanigan said; the cotton candy is a best-selling, value-added product.

Indeed, fellow maple syrup producer Greg Christian comes up the hill from his own maple day event, a pancake breakfast in a local church. Christian has sold out of cotton candy and needs to buy ten more bags for his guests.

“This industry is a labor of love,” Christian said. He works full-time as an engineer, but he says the profits from his maple syrup and honey operations add significantly to the family’s income.

For him, turning a hobby into a business was worth it for the joy it brought his family. He loved spending quality time in the sugar shack with his father, and was excited about sharing the experience with his young daughter as she grew up. 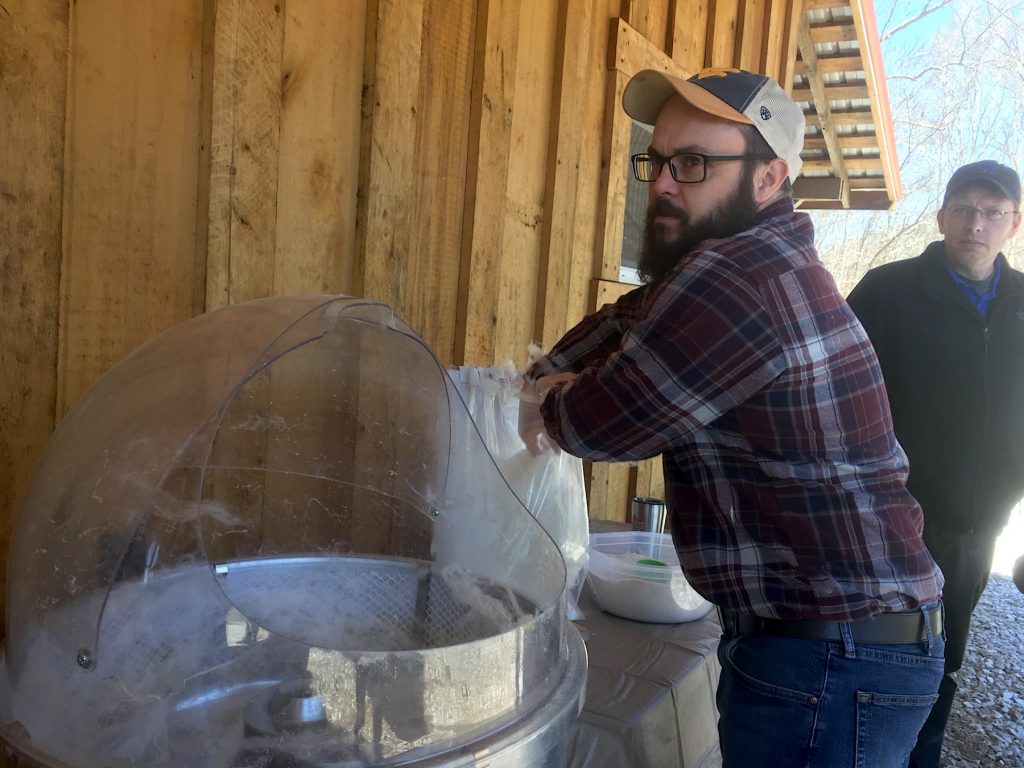 Seth Long says the next step for the Kentucky Maple Syrup Association is to get Kentucky added to the U.S. Department of Agriculture’s maple syrup program, which would formalize the crop as part of the state’s agriculture output. But following the 2017 national agricultural census, six states with higher production than Kentucky, including Ohio and West Virginia, were slated for removal from the program because their production numbers were too small.

Charmaine Wilson, state statistician for the USDA’s West Virginia statistics office, said production is growing “slowly but steadily” in the state, but West Virginia still accounts for a small percentage of the country’s total supply. Removal from USDA statistical programs is routine for niche crops.

Wilson acknowledged the loss of up-to-date data could be a challenge for producers. “Data is basically the info you need to put in a grant to justify getting money you need for a program. Data lets the legislators know how relevant a crop is in West Virginia. Data gives you that drive to get what you want when it comes to making laws.”

Maple syrupers in the Ohio Valley don’t expect maple syrup to single-handedly solve the region’s economic woes, but view the product as one part of a diverse, sustainable economy. Maple syrup is “renewable, it’s long-term, it’s reliable, and it’s non-extractive,” said Letcher County’s Shad Baker. “This can’t be taken from us.” ■

This story was originally published by Ohio Valley ReSource under the title “Sweet Equity.”

Sydney Boles is a reporter for Ohio Valley ReSource covering the economic transition in the heart of Appalachia’s coal country. Sydney received her Master of Journalism from Medill School of Journalism, where she covered immigration and housing insecurity in Chicagoland.