On The 64: A Bus Ride Through Pittsburgh’s Past And Promise

When I moved to Pittsburgh, my city bus experience was limited to the years I rode Sun Tran #3 up Sixth Street to Wilmot during middle and high school in Tucson, Arizona. Eventually, my friends were driving and so was I, ending my bus trips. But when I arrived in the Steel City two years ago for grad school, I got a Pitt student ID and, therefore, free bus rides. I became one of the 175,000 people who ride Pittsburgh Port Authority public transit every weekday, come rain or snow. I discovered that my favorite line wasn’t the one that took me to Pitt’s Cathedral of Learning, or downtown, or to bars in South Side. It had older vehicles and longer wait times. However, this bus — the 64 — got me to some of my favorite Pittsburgh places. One day, I decided ride its entire route with some friends, to get to know it better. I didn’t realize it would teach me so much about Pittsburgh’s past, too.

I waited for Cameron that morning at my usual stop in Shadyside. As Pittsburgher Fred Rogers would have said, “It’s a beautiful day in the neighborhood”: sunny, a cloudless sky. The bus pulled up and my photographed face smiled back at me as I swiped my ID. The driver nodded at the familiar ping and I met Cam at the back of the bus. He removed his ear buds and I sat down, the vent roaring behind me.

“Did you go to the potty?” I joked. My father always asked my brother and me that before road trips, even as adults.

He chuckled, and the bus turned at the Presbyterian church on Negley and Fifth. Two years ago I saw crews filming parts of The Fault in Our Stars there and down the block; returning from school at night, the industrial lights glared against the buildings, reminding passersby of Pittsburgh’s growing role in the film industry.

Our friend Laura got on at Walnut and Negley and the bus continued up the road. This part of the route was familiar — we passed apartments, an upscale Giant Eagle (where none of us shopped), and soon entered Bloomfield, Pittsburgh’s Little Italy.

Ninety distinct neighborhoods shape the city, each with its own history and flavor. It’s one of my favorite parts about living here, and every bus line passes through some. The 64 traverses five — Lawrenceville, Bloomfield, Shadyside, Squirrel Hill, and Greenfield, ending in Homestead, PA.

I hadn’t explored Bloomfield too much, so I didn’t know that it was starting to evolve. Like neighboring Lawrenceville, property values were rising and more young professionals were moving in next door to folks who’d been there for generations. I just knew that there were two great independent bookstores on Liberty Avenue.

Cameron gestured to a dojo on the other side of the road; he used to take karate there.

Friendship & Millvale — 10:29 a.m.: We passed Friendship Park, a blocklong stretch next to West Penn Hospital. It would probably be a beautiful place to sit and clear one’s head — some benches, lots of grass. Clean. Another minute later and a different hospital loomed, shiny and colorful: Children’s Hospital of Pittsburgh. Built in 2009, it’s one of America’s top pediatric hospitals. It’s also the first reminder of Lawrenceville’s development visible from our seats.

Penn & 34th — 10:32 a.m.: Two people disembarked; we were the only riders. We talked about locksmiths and Oakland’s many tattoo parlors, until we heard a shout from the driver. It was the last stop — Lawrenceville — and he was heading to the garage. We had to wait for the next 64.

Lawrenceville is to Pittsburgh as Williamsburg is to Brooklyn — a hipster haven. But in Lawrenceville, while millennials do flip houses, and artisanal cocktails abound, there is still a sense of community among those who have settled there. Led by residents, the non-profit Lawrenceville United organizes neighborhood cleanup days and block parties; local business owners support one another, collaborating on events like Shop Late Night Lawrenceville.

Where we stood at 39th & Butler, we couldn’t see Arsenal Bowling Lanes (The Dude himself would love it), any of the buzzworthy eateries that have landed Pittsburgh chefs on James Beard Award lists, or my personal favorite, the inimitable House of the Dead (“Pittsburgh’s premier zombie store”). But they were there, just blocks away.

We didn’t wait long until another 64 picked us up. This bus was also nearly empty, and we rolled along 40th past Arsenal Park. Looking out the windows of the bus, I had no idea that the biggest civilian disaster of the Civil War happened there.

September 17, 1862, was a bad day for America. While the bloodiest battle ever fought on US soil waged between Union and Confederate troops at Antietam Creek, almost 200 miles away in Pittsburgh a spark ignited gunpowder at the Allegheny Arsenal, causing three explosions and detonating 125,000 rounds of ammunition. Seventy-eight people — mostly women and girls — died. Although the community was devastated, work continued. The lab was rebuilt soon after.

Little remains of the arsenal. Its site is now the nine-acre park we passed. Like much of the city, the land fell into disrepair for a while. But Pittsburgh remembers those who died there and the arsenal’s historical significance. Groups aiming to preserve and improve the area have formed since Lawrenceville’s revitalization. This spring, meetings began with residents and organizations to solidify details for plans to update the park.

We retraced our route, the traffic our soundtrack. The change in architecture was clearer — fewer row houses going from Lawrenceville to Bloomfield to Shadyside. More gated yards.

The 64 turned up Shady Avenue, and the houses grew like they were under a spell. Squirrel Hill North is much like Shadyside, with mansions and large single-family homes. Lawns are spacious, landscaped, flower-bedded.

We turned onto Forbes, which locals refer to as “upstreet,” and then onto Murray. The marquee at the Manor Theatre, a 90-year-old independent cinema, advertised a Jewish film festival that had just finished an eleven-day run. We saw delis, cafes, pizzerias, bakeries, locksmiths, jewelers, and dry cleaners. “It has its own everything,” Cameron said. “It feels like Squirrel Hill is a village.”

1892: On the eve of expiration for a collective bargaining agreement with the AA, Carnegie Steel’s CEO, Henry Clay Frick, ordered a lockout of the Homestead Steel Works. On Frick’s orders, a wall around the mill was finished, sniper towers and water cannons added. Workers surrounded the plant, boldly holding it hostage.

When 300 Pinkertons arrived on July 6, 1892, a battle raged on the Monongahela’s banks — a New York Times article reported ten killed and at least fifty wounded. The workers managed to win that battle, but National Guard troops arrived soon after. Eventually the strike ended, but the Battle of Homestead remains one of America’s most serious labor disputes. 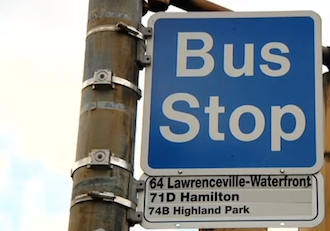 Today, it’s the Waterfront, a shopping center that opened in 1999. There’s a Gap, a Yankee Candle, CostCo, Men’s Warehouse, Omaha Steaks, and more, all chains. Among such shops, the old equipment sticks out. They’re relics of a different era, from jobs few in my generation will have. The mill’s pumphouse still stands. Nearby is a Lowe’s Home Improvement Warehouse: the last stop on the 64 line.

We disembarked there, not allowed to stay on the bus during the layover without the driver. Another would collect us at the Giant Eagle. To kill time, we went into the Lowe’s and helped Laura copy keys. Outside, a 12,000-ton forging press loomed, silent.

Waterfront Giant Eagle — 11:58 a.m.: We boarded for the last time that day. We crossed the river, all looking toward the driver, toward the city, on our way home.

Reflecting on our ride, Laura articulated it best. “It makes it real,” she said. “It makes me think of Shel Silverstein’s Where the Sidewalk Ends, this mental image that at some point, you’d get to a mythical place where it ends and it’s all otherworldly. But when you take the bus all the way through, it’s not as mythical as you imagine.”

In some ways, the 64 is bookended by superlatives — the sites of a war’s most disastrous civilian accident and Pittsburgh’s biggest labor dispute — but new vision, too. It confirms the Pittsburgh I know, inevitably informed by shades of its past. In its own way, it keeps Pittsburgh’s myths alive. Maybe that’s otherworldly enough.

___
Sara Button is a writer, traveler, and tiramisu aficionado. Her work has appeared or is forthcoming in BBC Travel, Pittsburgh Magazine and Travel + Leisure, and she is the co-editor of Hot Metal Bridge. Hailing from the very dry heat of the Sonoran Desert, she now lives and writes in Pittsburgh.

Belt is independently owned; become a member and support us (plus great cool gifts).