I moved away from Cleveland in 1999. When I return to visit, I spend about 10 percent of my waking hours in transit between my mother’s condo on Fry Road in Middleburg Heights and my dad and stepmom’s house on Ashton Road in Cleveland Heights. I drive from the western suburbs to the eastern. If you are not from Cleveland, just imagine driving across whatever metropolitan statistical area you are from, swooping routinely at 65 mph across all that census data in either your dad’s black Honda Go or your mom’s white Jeep Liberty.

In novels and movies and stories, journeys — literal, transportation-based journeys — often get filed down to a cut scene. Because these trips are often hurtfully boring: the Millennium Falcon’s warp drive sputters to life and whooshes protagonists to a different solar system; the troikas in Russian novels jostle down rutted feudal roadways, the narrator only seeing dirty peasant kids and snow before arriving at the next plot point. 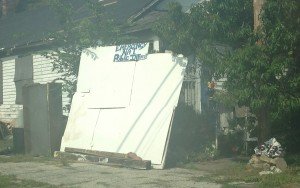 But I’ve completed so many circuits of Cleveland that these voyages — epicycles within a larger orbit of the eastern United States — have become a part of home.

Since about the time I was old enough to drive, my parents have been divorced and living on opposite sides of Cleveland. My mom has lived in Berea and Middleburg Heights, dim suburban sleeper cars clattering along behind more vital parts of Cuyahoga County. My dad and stepmom have lived in Cleveland Heights, which is swell and way less of a nowhere, although the non-lace-curtain in me can’t help but bite my thumb at the Volvos and the bistros and the restaurant that only serves fancy ice cream and french fries. [blocktext align=”left”]Two baseball diamonds whizz past, sitting happily, always green and small, in the shadow of a bunch of megalithic chemical tanks and smokestacks. [/blocktext]

The drive between my west side and my east side takes 45 minutes. It’s mostly the empty, cracked-concrete meadows of I-71, then a short stretch on Cleveland’s rump highway 490. That road dumps you out onto E 55th Street. Turn onto Woodland, which becomes Fairmont, and that pretty much gets you there. There’s an intermediate-swimmers variation, where you take a back street called Beaver Avenue to avoid a few traffic lights on Woodland. The crumbling houses and cinder-block churches along Beaver Ave have been disappearing under bulldozers slowly for the ten years I’ve driven past them, like civilization running backwards. By the time I’m done driving through Cleveland, I expect to see long-extinct mammals grazing along E. 68th Street. Perhaps giant prehistoric beavers.

Interstate 490 is the scenic part. There were originally plans to have the road that became 490 barrel through the heart of the Heights, through the Shaker Lakes, doing to the East Side what 71 does to the west side — stick a really big concrete finger in its face, forever. But there was a highway revolt against the planned “Clark Freeway,” and 490 was stunted, done growing at all of 2.43 miles in length.

490 is elevated enough to afford some of the best views in Cleveland. To the south, two baseball diamonds whizz past, sitting happily, always green and small, in the shadow of a bunch of megalithic chemical tanks and smokestacks. These ballfields seemed strangely familiar to me when I started making this drive in 1997; only later I realized it’s because the fields and the industrial scenery appear in the opening credits of Major League. [blocktext align=”right”] In the winter, every single thing in Cleveland, even people and thoughts and feelings, gets caked with this bouillabaisse of snow and dirt and salt and sadness. [/blocktext] A matter of seconds after those diamonds, across the highway to the North, the punkin-toothed skyline of Cleveland jumps out from behind the bluff of Tremont. It’s beautiful and grubby, this view, Progressive Field in the foreground rhyming with the softball diamonds, and the wide-yawning industrial valley holding up the sky. There’s also a smokestack that belches flames high into the day and night, ceaselessly burning something to make something else.

I-490’s official name involves the noun phrase “Opportunity Corridor,”* which is bitterly inappropriate, because it is a road that basically goes from a freeway interchange to a freeway interchange, with the only option that isn’t yet another freeway being dumped off at the intersection of a railyard and E. 55th Street. 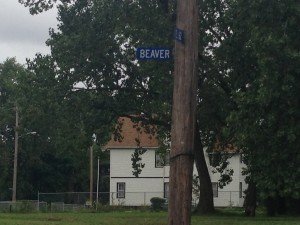 As I drive the highways and the blighted streets and the nicer streets over and over, I see few people outside, few businesses, few public spaces. The city seems dead or sleeping or dying in its sleep. In the winter, every single thing in Cleveland, even people and thoughts and feelings, gets caked with this bouillabaisse of snow and dirt and salt and sadness. It’s just grime; it washes off, but it contributes to the brain-feel of Cleveland, a shitty American cousin to James Joyce’s snow falling faintly through the universe, upon all the living and the dead. I scuttle forward and back, past the zoo, past Riverside cemetery, past Cleveland. The sky is the same color as the concrete. These roads can feel like the complete opposite of a place where people live. On one of I-71’s more zaftig curves, an enormous light-beer billboard faces southbound eyes. It depicts a snowscape of its own, nothing like the real one below it, and a cartoonish dog house. Inside is a dog in a Browns uniform and helmet. The billboard reads: “UNLEASH THE COLD, CLEVELAND.”

Pete Beatty is Acquisitions Editor at Open Road Media and an editor at The Classical.

*Correction: Opportunity Corridor is the name of a transportation and economic development project aimed at connecting I-490 to the University Circle neighborhood.