The Opposite of Cool: Parma’s Ukrainian Village

by George Mount
excerpted from The Cleveland Neighborhood Guidebook

There’s an effort in Cleveland to recreate what it once was: a city of integrated neighborhoods valuing culture, family, and civic pride. But I often feel no sense of continuity with the past in these urban enclaves. Few of the hippest restaurants and coffee shops have been around for more than a few years. Emblematic of this difficulty to integrate the past are posh condominiums repurposed from closed schools and factories.

It’s great to breathe new life into these structures, but unfortunate that many longtime residents, likely alumni of West Tech or long-ago Eveready employees, can’t afford these luxury dwellings. This fracturing could make you wonder: can the neighborhoods of Cleveland grow stronger while respecting the past?

I believe the answer is “yes,” and the proof is right over the 480 bridge at State Road. It’s a place many urban pioneers reactively call the opposite of cool.

I live in Ukrainian Village, Parma. This stretch of State Road between Tuxedo and Grantwood was given this title in 2009, although this codified the obvious. Home to Ohio’s largest Ukrainian population, it’s got the Slavic flavor that makes this region unique.

Parma in the 1950s was the fastest-growing suburb in America. Postwar industrial workers resettled in the suburbs, and Parma, sitting on the city’s southern border, close to a large manufacturing base, was the first stop. The Ukrainian community, previously based in Tremont, found a new hub in Parma, namely along State Road.

Of course, this suburban exodus contributed to Cleveland’s population drain. Parma grew in the time of white flight, and remains mostly white. Fifty years after Parma’s population boom, and sustained by continued immigration from the old country, Ukrainian Village retains its ethnic identity, with some smattering of black, Hispanic, and even Filipino influence.

Parma gets an unfair reputation: boring, gruff, slovenly. It’s a big suburb—the biggest in Ohio—so sprawl does exist, especially the further from the Cleveland border you go. But Ukrainian Village, on the town’s northern border, is a classic inner-ring suburban neighborhood. Unlike many others, it is livable in its own right, proving that there is a way to combine old-world customs, livable neighborhoods, and affordable housing.

Let’s take a tour. Coming from the north, you will see the Basista Furniture sign towering over the neighborhood, one of several vintage neon signs dotting the block. These signs convey an attitude expressed by much of the village: “Hip or not, this damn sign works and we’re using it.” It’s cool without trying to be cool.

These churches worship in the same rites as the old country. Very little has changed in Ukrainian liturgical worship, another instance of the “if it ain’t broke, don’t fix it” attitude that pervades the neighborhood. The services can last for two hours or longer, the majority of the time spent standing. At least there is plenty to occupy one’s attention—the “smells and bells” of incense, icons, and chanting are meant to engage the whole person in prayer.

Like many ethnic churches, food is a staple for revenue and ministry. There are Ukrainian food festivals, weekly pierogi sales, and my favorite, Lenten fish fries. St. Josaphat hosts one in its former house of worship, known as the “Astrodome” for its arena-like architecture. Lines flow out the door, and it’s worth the wait. St. Vladimir’s also hosts a fish fry in its banquet hall, serving the usual fried fish and chowder but also Ukrainian items like pierogi and potato pancakes. I look forward every Lent to meeting family, friends, and neighbors at Parma’s fish fries. There’s no better way to start a cold, damp March weekend in Cleveland.

It is possible to buy your food like you would in the old country, in specialty stores, not at a supermarket. There are several bakeries, butcher shops, imported dry-goods stores and so forth. Nearly every storefront in Ukrainian Village is locally owned and operated, many of them ethnically Ukrainian. 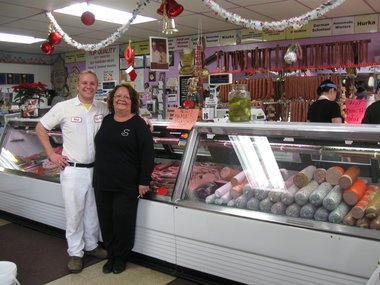 People come from around Northeast Ohio for the old-fashioned kielbasa at State Meats. Demand peaks at Christmas and Easter, when the scent of smoked meats lingers in the air for blocks. The pierogi next door at Mama Maria’s, a prepared-food deli run by State Meats, are fantastic. And a few storefronts down you can have more pierogis at Perla Homemade Delight. OK, kielbasa and pierogi aren’t light; Slavic food is starchy and hearty, like the people.

Looking to buy? A well-maintained, 1,500-square-foot bungalow can go for under six figures, and the crime rate is well below that of most cities of the same population. And a quick bike ride or Uber gets you to Tremont or the Flats.

These days, I find myself giving my friends lots of tours. Beforehand, I get some groans: “It’s so far! There’s nothing to do!” But by the end the objections have usually been overturned. So for those looking to improve the city of Cleveland’s neighborhoods, I salute you. But if you have never been to “boring” Parma, take a drive down State Road. It’s not far, and there’s a lot to admire.

George Mount is a new resident of Parma, although his interest in the city started while attending Padua Franciscan High School. When not at work as a business analyst at MetroHealth, he plays violin in the Parma Symphony Orchestra and blogs at georgejmount.com.