Our Friendliness Will Save Us

“Can you tell me which one is the fennel?”

I looked up at the voice, annoyed at being drawn out of my own panicky thoughts. For the first time since I was 25, I was shopping at a Giant Eagle, and had been quickly overwhelmed by the immensity of the place. It was at least six times the size of the grocery store I frequented in Brooklyn. When the woman spoke to me, I was resolving to buy a few basics and return later when I would be able to take more time. As I stood in the produce section, desperately trying to locate the cilantro in a wall of herbs, the woman approached, and asked if I knew which was fennel.

While it’s an exaggeration to say that New Yorkers never strike up a casual conversation with a stranger, it’s not certainly not common. We’re trained from the moment of our arrival in the city to constantly, subconsciously, screen for crazy people, who are best handled by being completely ignored. Even though logic indicated that a well-dressed, middle-aged white lady in the Giant Eagle was not going to pee on me or hit me up for change, I still tried to ignore her.

She was undeterred. In New York, if you’re ignored, you either speak more insistently before giving up, or you move on to the next target. In Pittsburgh, a city of relentless friendliness, the woman merely took another step towards me, putting her hand on my arm, and gestured widely to the wall of produce. “Do you know, honey, which one is the fennel?”

What can I tell you, dear reader? I broke, charmed by her audacity. Soon, I’d not only found the fennel for her (“It looks like licorice root! Oh, I bet fennel is just a fancy name for licorice root!”), I’d even made a couple of serving suggestions. We parted friends.

Posting about the conversation on Facebook later, I enjoyed the chorus of responses from my friends who lived in, or knew Pittsburgh: “Yep, welcome home.” “Pittsburgh: where no one minds their own business.” And, my favorite, “You’re probably related to her or know someone who is.”

The last is from my friend Gretel, who also grew up in Johnstown, and still lives there. We had lunch there together before I had moved back, and a man in the next booth had interrupted our conversation to offer his advice on choosing a good massage therapist, the topic we were discussing. “That’s Western Pennsylvania,” she said after he had left. “No one minds their own business. That’s what I love about it.”

It’s true. Pittsburgh has many defining characteristics: it seems to be stapled together by a system of bridges; it’s a culture so steeped in Steelers lore that local wedding planners use the Immaculate Reception as a selling pun; there are 50 different buildings or businesses named “Carnegie”; we have a multiplicity of pierogi vendors; there’s a downtown that’s surprisingly pretty, especially to shocked visitors who expect to be handed a gas mask upon arrival. But for me, what most defines Pittsburgh is the intense belief in friendliness as a social good.

[blocktext align=”left”]This city’s slogan should be: We Can Make Conversation About Anything.[/blocktext]To my shock, over the last three years of living here, I’ve come to find this… pleasant. I go to a lot of events around town – theatre, concerts, readings – and although I’m often alone, I find that I usually end up having a good conversation with someone there. Either I know them, or I know someone who knows them, or, most likely, they approach me and just start talking about whatever is in front of us. I’ve had so many conversations about water fountains in this town: whether the water is cold, what the water pressure is like, how Heinz Hall’s water fountains compare with PNC Park’s water fountains. This city’s slogan should be: We Can Make Conversation About Anything.

I enjoyed New York’s “Anything goes and no one can comment on it” atmosphere in my 20s and 30s. It was the perfect time to try out different things – interests, styles, haircuts – without the fear of someone putting me down. I’m glad I was there during those years. But in my 40s, I find that as my interest in myself thankfully declines, other people interest me more than ever. What are they thinking? What makes them tick? In New York, I rarely knew. In Pittsburgh, a simple hello starts the conversation that will let me know.

Of course, finding out what people are really thinking isn’t always pleasant. Sometimes I wish this city would shut up. Chatting with everyone you meet may sound Bedford-Falls-lovely, but the truth is that it isn’t always. And I don’t say that just because sometimes I don’t want to show a stranger how to figure out 35 percent off, or where they keep the menus, or whatever other wackety request has come my way on a typical errand out and about. No, the problem is something deeper.

An anecdote: a friend, a white girl, walking in Schenley Park with her Latino boyfriend, encounters a outgoing old guy who charms them with stories about the city’s past. But after a few minutes, his conversation takes a turn to the dangers of interracial marriage and the problems “illegals” cause. They stay, trapped by his friendly, sociable tone. 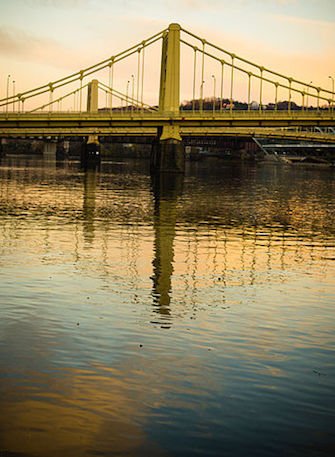 Or, another friend, who’s Asian, is harassed on the street by a woman insistently asking him “what” he is, no matter how often my friend says “American.” “But what are you, though, honey? But what?” My friend can’t yell at her, he reports later, because she seemed perfectly nice.

Or, I am warned repeatedly by white folks I meet not to drive through Wilkinsburg, a municipality adjacent to the city. This advice is unhelpful; Wilkinsburg is directly on the path between my apartment and my office, and I’d only avoid driving through it if all-out warfare was taking place. Every morning, on my way through the town, I can see, like a movie’s special effect, both the black people walking (safely and calmly) through depressed downtown and, floating above the scene, the concerned faces of the white people who warned me that it was “a bad part of town.”

What makes these stories Pittsburghian is not that they simply occurred. Casual racism is, unfortunately, one of the currencies of many of our cities and towns, even my beloved, diverse Brooklyn. Rather, they’re Pittsburghian because the people saying such reprehensible things were always open-faced, full-throated, happy to make conversation: in short, friendly as heck.

This cheery bias is the one of the worst parts about Pittsburgh. Any right-thinking person is horrified to hear such things said, right out loud, in a cheerful tone in the 21st century. We’d like our bigots to be slimy and skittish, easily spotted and avoided. Perhaps with a distinctive odor to warn us off.

Also, as I’ve noted, we all know each other here in the ‘Burgh, or are unknowingly related to each other, or are at least friends with someone who knows the person we’re talking to. While there is racial segregation at work in the city, Gretel’s truism still holds: We are all interconnected. Knowing that I am connected to bigotry increases my shame, and makes it harder, even impossible, to dismiss bigots, as I could in Brooklyn. In New York, if someone says something disgusting, you snap at them and walk away, never to see them again. I did this at least once a week. Pittsburgh doesn’t allow that.

Here, we are in the thick of it, all together, making it so much harder to turn away from bias and prejudice and racism within ourselves. Am I really so much better than the woman insisting on finding out where my friend is from, I wonder? When I turn away from the man at the Starbucks on 7th Street who insists on explaining why black people are dirty, have I done enough? Isn’t he my friend’s uncle, or my colleague’s neighbor, or the nice Sheetz clerk’s old teacher? People disappear into crowds less easily here. They stay visible. What they say lingers.

But I think our friendliness might save us, actually. There’s good intent twisted up with the strange ways of thinking here. It’s a friendliness that speaks to a desire to connect, even despite words that are off-putting. This isn’t, usually, the anger of a warped mind undone by difficult years but a product of limited experience, a too-trusting belief in what others have said and what media shows us, a universal human desire to distinguish. Such things don’t change the heart, so there’s something in there to try to speak to, or with. At least I hope so.

I don’t mean to be a Pollyanna about racism. Some people love to hate, and a casual conversation at the Primanti’s counter isn’t going to change that, I know. But I do think perhaps Pittsburgh has more potential to change than any other city I know. New York has mastered tolerance, but Pittsburgh, I believe, might be able to master inclusiveness, if we just keep walking up to strangers and shooting the breeze.

We’ll put our foot in our mouths over and over, but we’ll keep reaching out. Because we don’t know what fennel is, but we want to. And someone nearby will know. They’ll help us. Tomorrow, we’ll be better people than we were today.

___
Shannon Reed lives and works as a ​professor, writer and theatre teaching artist in Pittsburgh. Her work has recently appeared or is upcoming in The New Yorker, BuzzFeed, McSweeney’s Internet Tendency, Poets & Writers, Guernica and Narratively. ​She teaches at Waynesburg University. ​Links to her writing are available at her website: www.shannonreed.org.

Belt is independently owned; become a member and support us (plus great cool gifts).