A Night at the Drive-In During a Pandemic Summer

“It feels so foreign now, this kind of shared experience in real time.”


It’s a Sunday afternoon in Gibson City, Illinois, and you and I are idling in a line of cars at the Harvest Moon Twin Drive-in Movie Theatre, staring at a colorless stoplight. The stoplight is hanging off the side of the ticket booth, and when the time finally comes to let all of us out here in, it turns on, beaming green. It’s a thoughtful touch, invoking a sense of travel away from whatever we’re leaving, back there toward the highway.

Some, like you and me, have come here especially early. We’ve driven four hours today for the pleasure of sitting in line, attempting to get the best view. These days, even waiting in line feels like a cathartic practice, knowing that eventually that stoplight must turn green, and our anticipation, all of this waiting, will be rewarded with admission and a double feature.

Or, in this case, two. Tonight, each of the Harvest Moon’s twin screens will host a double feature: On Screen Two, it’s Evil Dead and Army of Darkness. And on Screen One: Little Shop of Horrors and the film we’ve come all the way here to see, The Rocky Horror Picture Show. 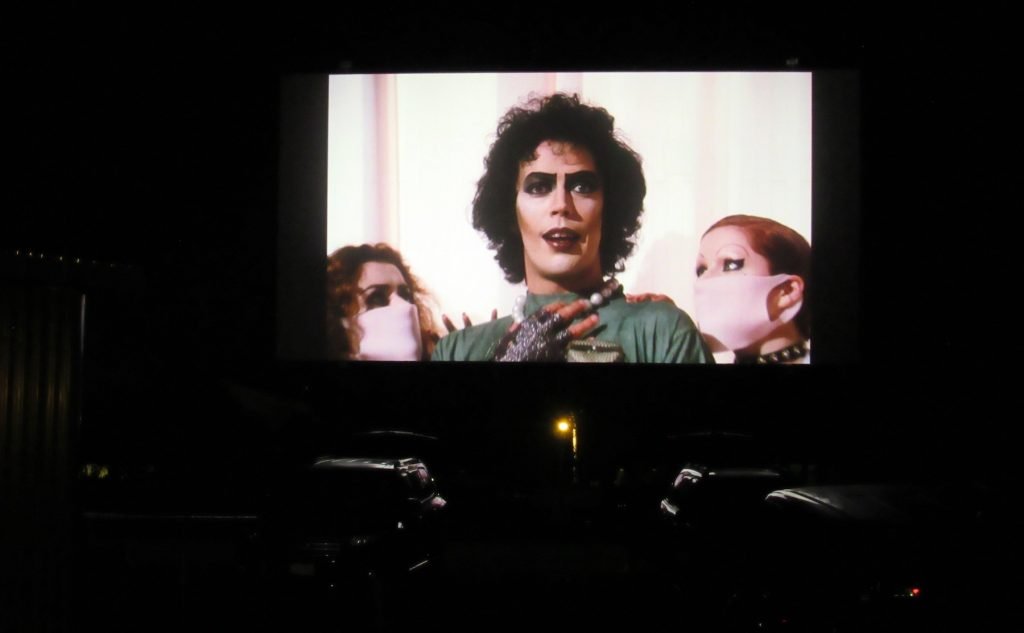 Dr. Frank-N-Furter and his masked assistants during the screening of Rocky Horror Picture Show at the Harvest Moon Twin Drive-In Movie Theatre. Photo by Avery Gregurich.

There are certainly traditional drive-in theaters closer to where we are, and some that have popped up in Walmart parking lots and city parks too. But none of them are showing Rocky Horror, seemingly the perfect late-night drive-in movie for the current moment. After forty-five years, the film is still in its initial limited theatrical release, having never actually been pulled from theaters. It’s become a tradition, like the drive-in itself, a sort of orbiting link in our ever-scattering popular culture. And all the convoluted logic of 2020 seems to be packed in there: a muscle-bound Frankenstein creation sparks interpersonal contention; choreographed dances are called out by a monotone criminologist; hell, even Richard Nixon’s resignation speech is shot out of a car radio: “America needs a full-time President and a full-time Congress, particularly at this time with problems we face at home and abroad,” the former president concedes.

It’s almost too much, too close, even if it was uttered almost half a century ago. But, you and me, we’ve come here to escape all of that, remember?

Even at half capacity—with one car, instead of two, parked between each set of speaker poles—the lot fills up quickly. No new films have been released for several months now, so General Manager Ben Harroun has had to get creative to fill the screens this summer. He’s done several “80’s Flashback” nights and even hosted concert broadcasts by country stars like Garth Brooks and Blake Shelton. “We’ve been really careful trying to pick bigger movies that we really know people want to see or delivering stuff like this weekend with The Rocky Horror Picture Show,” Harroun told me.

Harroun’s family has been running the Harvest Moon since 1989, when his father Mike decided to buy the abandoned drive-in facility, which had been closed for several years. It wasn’t a popular decision at the time, even with the previous owner. “The guy that owned the place tried his best to convince him to not re-open the drive-in,” Harroun said. “He was like, ‘You don’t want to do this. You’re gonna go broke. It’s a terrible idea.’”

But he did, and the Harvest Moon has opened every summer since—DVDs and streaming services be damned. It even survived the switch to digital projection, which has been a death knell for many small local drive-in theaters over the last fifteen years because of the cost, which starts somewhere near the $50,000 mark. Harvest Moon also claims to be the first alternative-powered drive-in in the world, with a small wind turbine and solar panel array operating directly beside the neon marquee.

It’s sort of jarring to see that turbine turning, a contemporary marker in an otherwise timeless space. Drive-ins pride themselves on nostalgia. Actually, they rely on it. That’s what has made them an iconic summer practice, right up there with baseball games, music festivals, and county fairs: across years, decades even, every night at the drive-in feels familiar. Tonight, as every night since the Harvest Moon first opened in 1954, the same dancing hot dog advertisement will fill the screen at intermission, and the national anthem will play over a rippling flag on the screen. I cannot remember hearing about the national anthem more than I have these last few months–what it means, who it’s for. But can you remember the last time you were actually around other people while it played? Neither can I.

This is the summer of no baseball fans, few, if any, concerts, and mostly canceled county fairs. The drive-in does not operate somehow outside of the pandemic, either. Signs everywhere remind the crowd to wear a mask, to maintain social distance. Harroun announces the same over the radio at intermission and between movies. The kid-oriented carousel ride is closed. Canisters of hand sanitizer are mounted to the outside wall of the snack bar. Even the 1940s ticket machine has been benched; we’ve all had to buy our tickets online to avoid unnecessary contact. In many ways, a night at the Harvest Moon, or any drive-in theater, is nostalgia resumed, though with some exceptions. A time warp, just like the most memorable song-and-dance number in Rocky Horror says. 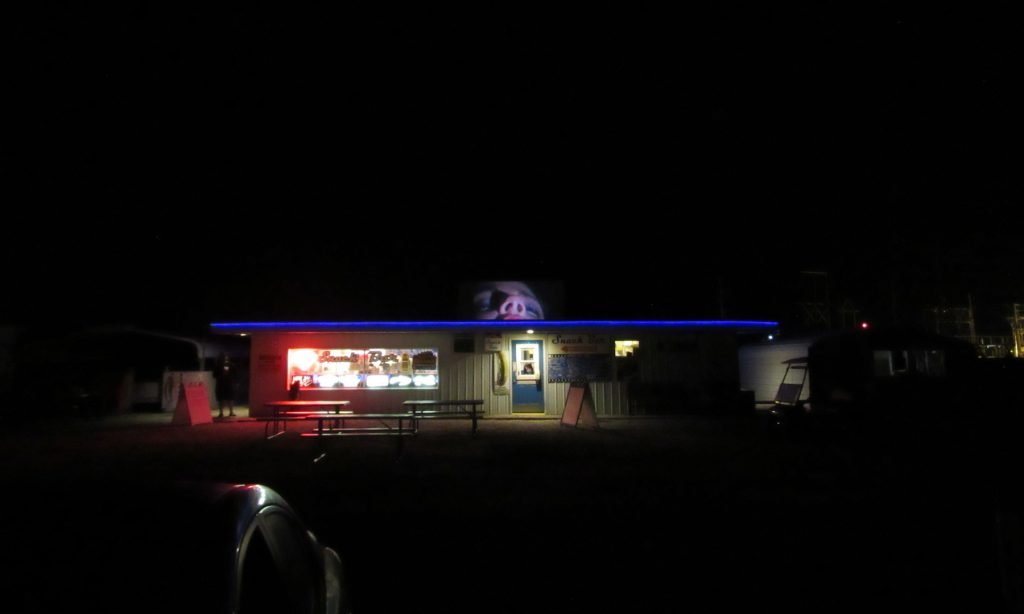 Harvest Moon’s vacated concession stand with the climactic scene of Evil Dead, on Screen Two, in the background. Photo by Avery Gregurich.

Leaning up against the hood of my car, while you and I watch Dr. Frank-N-Furter dismember Eddie with a pickaxe beneath a rock-and-roll ramble, it starts to feel like the image of the drive-in is more modern than it would like you to believe. All the modern estrangements between Americans are here: bumper stickers and window paint spell out political and social stances. Some of them cuss. Most of us wore masks as we waited in line at the snack bar, but some didn’t. Most of us kept six feet between, but some didn’t. Each choice seemed to relay more information about us than we realized.

The Rocky Horror Picture Show mostly draws something of a particular crowd, one filled with Bowie shirts and punk rockers buying tubs of popcorn in angst. A sacred text for many in the LGBTQ community, tonight saw a couple get engaged via the big screen before the movie started. We all honked our horns and flashed our lights. Or, most of us did.

If tonight is an indication of the level of business the Harvest Moon has done this summer, it has been as full night after night as the coronavirus restrictions in Illinois allow. “I’d say in the grand scheme of things, especially against the odds that we started out with, it’s been an extremely successful year. I mean we’re actually at a point now where our attendance is kind of similar as it’s been in the past few years,” Harroun said. “It’s nothing outstanding, but considering the weather and the movies we’re showing that’s not the brand new hot stuff, we’re very happy with it.”

I asked him why he thinks that is. He mentioned a combination of cabin fever and what he calls the “magic” of the drive-in. That magic is aided, in part, by the theater’s location in a cell phone dead zone. “Half of the cell phone companies don’t work out in our theater. So if you come out to the drive-in, unless you have AT&T or Verizon, and you stand in the exact right spot where your hands are in the air, basically, you’re not going to have a signal,” Harroun said. “So you won’t be getting on Facebook, Instagram, and Twitter trying to constantly check stuff. You’ll be actually able to just sit back and enjoy the experience of what’s going on around you and the people you’re with.”

A night at the drive-in remains an attempt at unfettered escapism, if we can keep the bumper stickers out of our lines of sight and numb our minds to the occasional too-apt scene. For a moment tonight, as Rocky carries Dr. Frank-N-Furter to the top of the RKO Pictures tower, it works and something happens at the drive-in. For a second, all of us are together, totally. We are seeing exactly the same thing, all at once. It feels so foreign now, this kind of shared experience in real time—and sacred, like a solar eclipse or an inside-the-park home run.

But then, without sympathy, the lights come up, and we are all right back here somewhere in 2020—amid a pandemic summer, in a country fraying at the seams.

The time warp is over. ■

Cover photo of a sixty-year-old intermission animation at the Harvest Moon Drive-In. Photo by Avery Gregurich.