Passive, Poor and White? What The Media Keeps Getting Wrong About Appalachia.

By Elizabeth Catte, via The Guardian and the Economic Hardship Reporting Project

To satisfy an elitist, narrative fetish about ‘Trump Country’, photographers from outside have long ignored my region’s diversity

In the process, we Appalachians became a symbol of political self-harm.

Appalachians were often used as both the abstract and real beneficiaries of Donald Trump’s promise to “make America great again”, and media outlets and prestige publications – from the New Yorker to Vanity Fair – sent reporters to Appalachia to extract profiles and images of the people they assumed could demystify our fractured political moment.

Their output came to form a distinct genre of writing – what I call the “Trump Country” piece – that saturated news cycles and fatigued readers with stories of complacent white woe and toxic politics. Podcaster Jayme Dale, originally from North Carolina, described 2016 as the year “the US collectively pointed a trembling finger of accusation at the Appalachian region”.

Even long after the election, Appalachia continued to receive the morbid interest of the national press…

As someone born and raised in Appalachia, in East Tennessee, I recognized the attitudes of Trump voters – some bigoted, some resigned – and experiences of hardship shared by many in the region.

But I also recognize a pattern of superficial press attention that recalled narratives produced during the 1960s “War on Poverty”, when sensational images of the poor filled the pages of newspapers and magazines.

To be Appalachian, both then and now, was to be white, deprived and spiritless.

Often, photographers and journalists capture a version of Appalachia that is not a place – a vast geographic region covering 13 states with more than 25 million people – but a social and moral dilemma that threatens the nation’s progress.

If you consider this an exaggeration, I’d invite you to perform an image search for “Appalachian photography” through the search engine of your choice.

If your results are similar to mine, you’ll find an overabundance of stark black and white portraits – a stylistic choice often made by photographers to signal that we are of the past and lost to progress – and images of white people experiencing extreme poverty and suffering because of it.

My search engine helpfully prompts me to narrow results by adding “hillbilly”, “trailer” and “inbred” to my search terms. Every time I perform this search, I notice a new element of its grim ratio. Today, for example, I calculated there are three times more images of white people in coffins than living people of color in my search results. 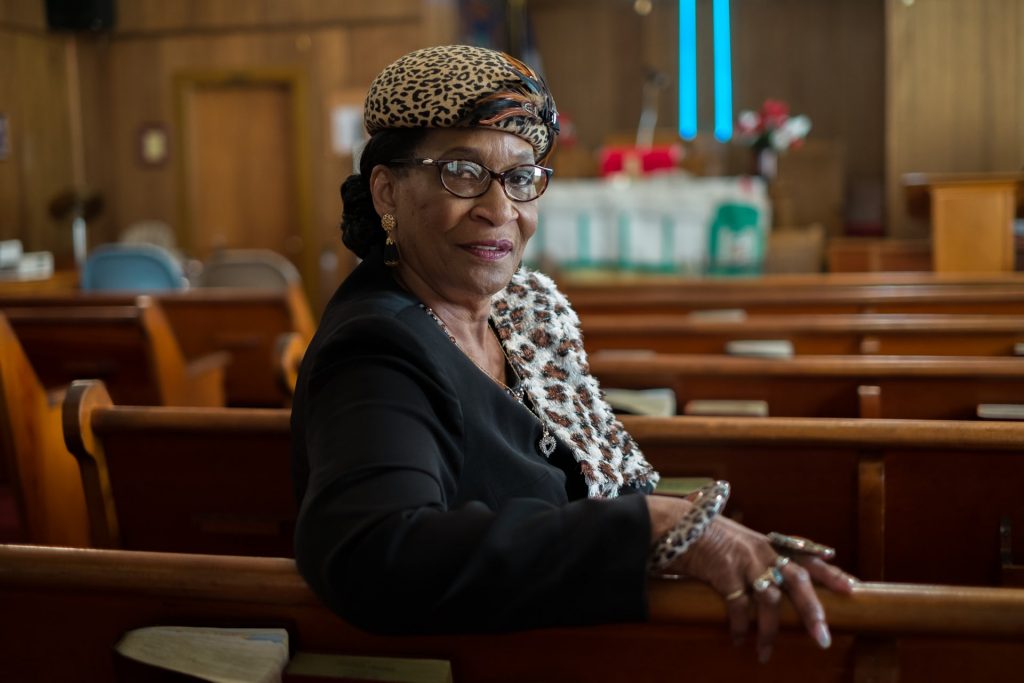 Cora Hairston, in West Virginia, photographed by Roger May. Hairston’s father surrendered his body in both life and death to coal, writes Elizabeth Catte. [Photo credit: Roger May]

The visual archive made for us is a mournful one, which stands in sharp contrast to the vivid images of youth captured by Kentucky-based photographer Meg Wilson. There is a stillness to images favored by the press, a photographic trick that confirms a narrative of our complacency and presents Appalachia as the dominion of the barely living. Wilson sets us in motion, in color, and full of life. I can see myself in her images and sense a connection to my place and history that does not occur when I gaze at those image results.

This sad tradition is enduring. Even long after the election, Appalachia continued to receive the morbid interest of the national press that, in its endless quest to discover how poor people swung an election, only succeeded in raising a question far more complex: why so many Americans needed it to be true when it wasn’t.

As I detail in my new book, the media enshrined communities with low voter turnout as the beating heart of Trump Country. There has also been a journalistic disappearance of nonwhite people in the region, seemingly to satisfy a narrative fetish about the white working class and their anxieties. And that’s before questioning why so many readers on both sides of the political aisle used a memoir (Hillbilly Elegy) written by a venture capitalist (JD Vance) to decode the political choices of the region’s poor.

Perhaps it’s because Appalachia has long been a place that, as historian Ron Eller described, convinces comfortable, distant white Americans of the “righteousness” of their own lives.

The arc of Appalachian history is filled with stories of attempts by the powerful to sever poor people from the richness of the land around them. The wealthy exonerated themselves with their insistence that their economic experiments – extractive capitalism, for example – had a positive impact on a people otherwise doomed without intervention.

The arc of Appalachian history is filled with stories of attempts by the powerful to sever poor people from the richness of the land around them.

Reformers, philanthropists and missionaries came often to the mountains to offer relief, but lacked the capacity or willingness to alter the way power and wealth worked in our world. Because we could not be fixed, we became an “other” – a “peculiar people”, as historian Henry Shapiro observed, predestined, or so many Americans came to believe, by our lack of moral character to be poor and backwards.

If we constructed a mythology for Appalachia, one of the most powerful and fickle world-makers in our pantheon would be the stranger with a camera. Ever present throughout our history, the stranger appears in the region not to capture reality but contradictions.

The stranger is a real person – our most infamous stranger, Canadian film-maker Hugh O’Connor, lost his life after a Kentucky landowner shot him for taking pictures of his poor neighbors in 1967 – but also the manifestation of an imbalance of power.

But not all photographers here put their work in direct conversation with regional stereotypes, and the images I prefer are ordinary and uneventful.

Warm and beautifully composed portraits – a specialty of West Virginia photographer Roger May – are a personal favorite. His portrait of Cora Hairston (above), from Sarah Ann, West Virginia, is particularly moving for me.

We learn that Hairston performs as Rosa Parks for her church and dreams of her late father who surrendered his body in both life and death to coal. A mining company destroyed the cemetery where he was buried, and unable to find where he was reinterred, she visits with him in her dreams instead.

Hairston reminds me of my grandmother, who also dreams of people she’s lost, some of whom, if I chose to, I could locate among the subjects of Lewis Hine’s photographs.

Hine photographed mountaineer families in East Tennessee evicted from their homes and land to facilitate the construction of rural development projects in 1933. Hine, best known for his photographs that exposed the horrors of child labor, was an incredibly skillful photographer. But because, like so many others, he came to us to photograph a problem and not a people, I stubbornly resist locating my ancestors in his archive and dwell on the loving images of other families, produced with care and trust. 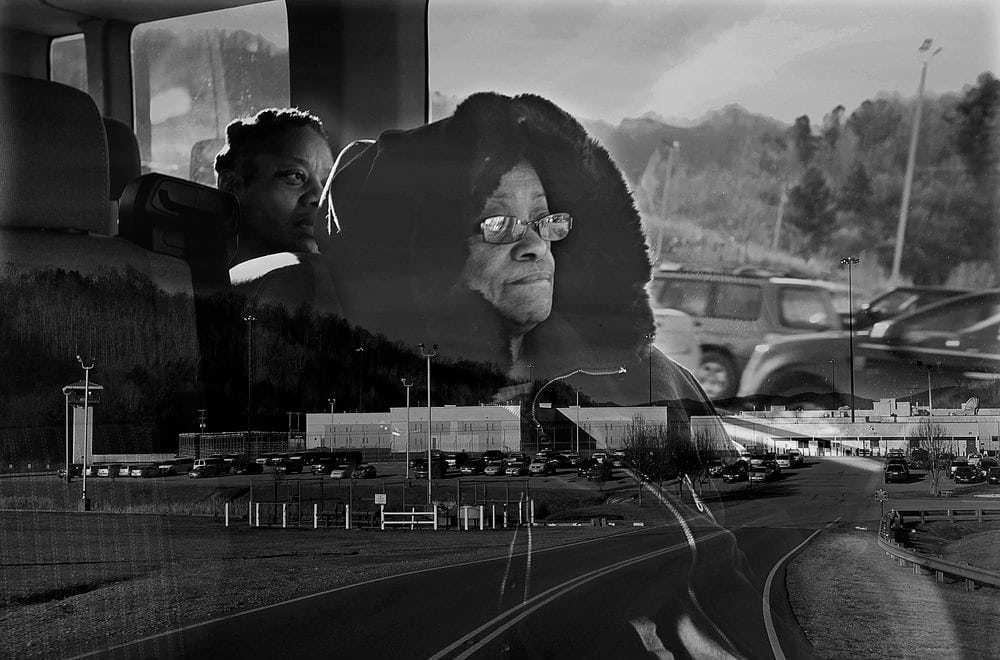 Other images in my own counter-archive of Appalachia tell the story of the region’s activism and advocacy.

Whitesburg, Kentucky, home to media organization Appalshop and its radio affiliate WMMT, has a long history of using community media to create social change by centering and elevating regional voices. One longstanding media project is the WMMT radio show Calls From Home, which broadcasts messages of news and inspiration into area prisons that receive its radio signal and provide families with a no-cost option to send a personalized message to their incarcerated loved ones.

Appalachians inspired by and organizing through WMMT and Appalshop often do other work with prison communities, developing community theater programs about incarceration, and offering assistance and fundraising help to make in-person visits possible.

I am attracted to images of contentment and freedom, an emotion not often captured by strangers with their cameras who prefer us posed in dilapidated bars and trailers or staring dejectedly at the remnants of our discarded industry.

Raymond Thompson, a West Virginia-based photographer, captured images of one such trip organized by WMMT producer Sylvia Ryerson for his documentary project The Divide, which he shot in 2016, about the human cost of incarceration on families. Louise Goode, pictured above, traveled 430 miles on that journey to visit her son whom she had not seen in three years.

Although both Thompson and Ryerson use multimedia technology to advocate for the families of those incarcerated, their work draws from a rich tradition of community organizing, outreach and activism in the region. By providing a venue and a medium, those incarcerated become real people to the communities where prisons are located.

But above all, I am attracted to images of contentment and freedom, an emotion not often captured by strangers with their cameras who prefer us posed in dilapidated bars and trailers or staring dejectedly at the remnants of our discarded industry.

If I had the power, I would break that image search and fill it with photographs of joy and youth and if you asked me how that could possibly represent our reality I’d remind you that thousands of images of passive, poor white people don’t do a very good job of that either.

Elizabeth Catte is a public historian and a regular contributor to Belt Magazine. Her book, What You are Getting Wrong About Appalachia, is out now from Belt Publishing. To get a complimentary copy, become a member of Belt Magazine starting at $5 a month.

This story was originally published by the Guardian and the Economic Hardship Reporting Project as part of their On the Ground project.

Banner photo: A young woman on a skateboard in the Appalachia. [Photo credit: Meg Wilson]