Physics From The Farm

The first thing that Ellen Vinson wanted to tell me about her aunt, physicist Melba Phillips, was that Phillips was the only person from Pike County, Indiana, to ever have an obituary in the New York Times. That turns out not to be true, but it felt right. Today’s Pike County is a landscape of corn, wheat, soybeans, and woods, occasionally broken up by coal-powered electrical plants and the strip mines that feed them. Aside from the annual floods, not much happens in Pike County.

Phillips, Vinson, and I all officially grew up in Hazleton, an old river town that straddles the line between Pike and neighboring Gibson County. With nearly 50 percent of its residents living below the poverty line — a rate higher than that of Cleveland, Detroit, or even Gary — Hazleton just doesn’t seem like the kind of place that produces famous scientists.

As mid-twentieth-century physicists go, Melba Phillips certainly qualifies as “reasonably famous.” She was one of J. Robert Oppenheimer’s first graduate students at the University of California in the 1930s, and she co-authored one of his most important papers, on how deuterons (a subatomic particle consisting of a single proton and a single neutron) react with other nuclei. The reaction bears her name: the Oppenheimer-Phillips process. She went on to become a leading physics educator; in 1966 she was elected the first woman president of the American Association of Physics Teachers. In between, she got dragged through McCarthyist politics, pled the Fifth, and lost her job at Brooklyn College.

What I wanted to know was why I, a historian of science and the Cold War, hadn’t heard of her. To the casual observer, Phillips is merely one of the hundreds of physicists who passed through Oppenheimer’s life; she shows up, in cameo, in all the Oppenheimer biographies. It took an odd series of coincidences in Ray Monk’s Robert Oppenheimer: A Life Inside the Center (2012) to make me notice this remarkable woman who grew up just six miles down the road from my parents’ farm. Apparently the only thing more unlikely than a place like Hazleton producing a theoretical physicist is convincing the locals that it sometimes happens.

Today, J. Robert Oppenheimer is most famous as the haunted man who supposedly quoted the Bhagavad Gita when he witnessed the first atomic blast in the New Mexico desert in 1945. In the 1950s, though, Oppenheimer was equally well known as a martyr to McCarthyism. Both during and after his time at the Manhattan Project, Oppenheimer made many enemies within the government, whether for his (limited) support for the international control of atomic energy or for his early opposition to the development of the hydrogen bomb. A man with better political judgment might have gotten away with this, but this was never Oppenheimer’s strong suit. In 1954, the Atomic Energy Commission stripped Oppenheimer — the father of the atomic bomb — of his national security clearance.

Most of the testimony at the Oppenheimer hearings concerned his relationships with acknowledged members of the Communist Party. Those included his brother, Frank, who would later go on to found San Francisco’s Exploratorium museum; his wife, Kitty, whose second husband had been killed while volunteering in the Spanish Civil War; and several of his graduate students.

This situation at least partially explains why Oppenheimer’s biographers spend so much time talking about his relationship to his graduate students. It was biographer Ray Monk’s discussion of Wendell Furry, one of Oppenheimer’s students who joined the Communist Party after he left Oppenheimer’s circle, that first caught my eye. Furry, Monk explained, grew up in Farmersburg, Indiana, which happens to be yet another nondescript, slowly disappearing Southern Indiana farming town. It looks a lot like Hazleton, only dryer. Hoosiers who travel US 41 know it as a speed trap just south of Terre Haute.

That describes me to a T, so I did what any modern ex-farm girl would do: I emailed my dad. He wrote back immediately. Oh, yes, he knew the Phillipses. Yes, he used to keep some cows on “the old Phillips place,” but it wasn’t those Phillipses. He didn’t know anything about an Oppenheimer student or any Gibson County communists, but there was a more “progressive” family that lived a bit further east, closer to Petersburg.

This is where things got weird. I found a long remembrance of Phillips published in the journal Physics in Perspective. Toward the end, it included a photo of an elderly Phillips, surrounded by her family, back home in Pike County. There, in the lower right-hand corner was my high school social studies teacher, Billie Longabaugh. Billie, I was sad to learn, had died in 2004. My dad said: You need to talk to Ellen Vinson. 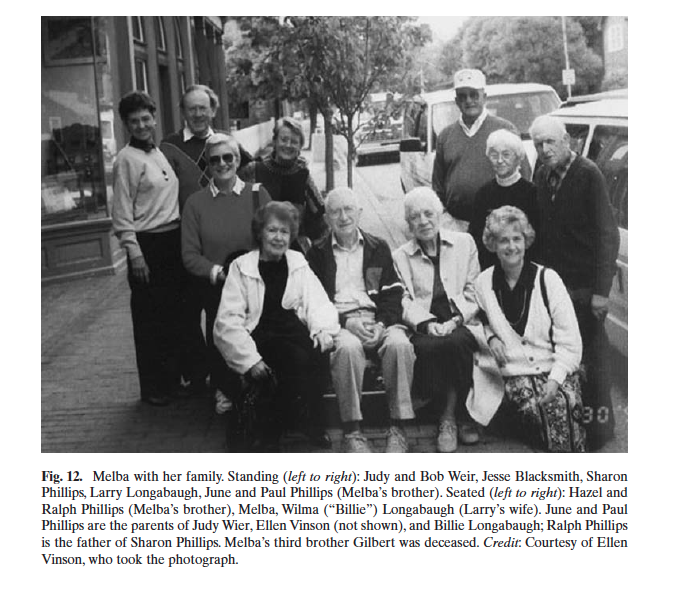 For three glorious weeks in springtime, the blooms of wild redbuds and dogwoods fill the Southern Indiana woods. They beckon to passing drivers, suggesting the possibility of wild morels. The drive from my folks’ place to Ellen Vinson’s farm takes me right past a dirt road that I suspect leads to a good foraging spot. I say “suspect” rather than “know” because my grandpa used to bring back bags and bags of mushrooms from somewhere over that way, but refused to tell use where — presumably because he didn’t have permission.

Melba Phillips loved this country. She held on to her part of the family farm, even after she had a full-time position as a professor at the University of Chicago. She returned there to live the last few years of her life with her niece, Ellen, and Ellen’s husband, John.

The Vinsons’ farm is typical of the more prosperous homes in the area. It’s a tidy brick ranch, surrounded by about an acre of lawn, a small pole barn, and several bird feeders. My conversation with Ellen Vinson, though, was unlike any I’ve ever had back home. Instead of the usual Hoosier basketball paraphernalia, her home was filled with elegant wooden bird sculptures and carefully chosen china. From the moment she answered the door, Vinson (the spitting image of her late sister, Billie) regaled me with stories of Manhattan Project scientists. She’d been to Frank Oppenheimer’s ranch in Colorado and played with Edward Condon’s kids.

Vinson, as the family spokesperson and archivist, maintains an entire shelf in her office devoted to Phillips’s memory. I was obviously not the first historian of science to ask her about her beloved aunt, though I was probably the first to recognize her frequent references to local landmarks. She sent me home three hours later with a copy of Life magazine featuring Oppenheimer on the cover, one of Phillips’s textbooks, another book mentioning Phillips’s contributions to the nuclear peace movement, and a giant binder full of documents.

I immediately realized that I couldn’t ask Vinson the thing I most wanted to know. Vinson had been telling Phillips’s story for years, so she was hardly the person to ask why I hadn’t heard it. Nor was Vinson particularly forthcoming on the obvious question of what I considered to be Phillips’s unusual background. I had the distinct impression that Vinson was tired of answering this question from historians and physicists, and why shouldn’t she be? “Melba was a remarkable person,” she told me.

Phillips herself didn’t consider her background unusual. In a talk she gave in 1978, she noted that a “surprising number” of her male contemporaries were sons of “small-town Protestant minister[s].” Instead of the ministry, her own family’s interests “ran to farming and school teaching,” with her grandmother, father, and assorted aunts and uncles all having taught in one-room schools. She grew up surrounded by books, both at home and in the public libraries that dotted the countryside. Still, she observed, “There were no physicists.”

Phillips’s trajectory was, in some ways, typical for the smart, ambitious, Midwestern farm kids of the 1910s and 1920s. Put another way: even though Hazleton didn’t produce many physicists, lots of mid-twentieth-century physicists came from places like Hazleton (see Farmersburg’s Wendell Furry). She passed the state teaching exam at age 16, obtained a degree from what she herself described as “the cheapest and nearest college,” and left for something better as soon as the opportunity presented itself — in her case, first a teaching fellowship in Battle Creek, Michigan, followed by graduate school at the University of California, Berkeley, where she met Oppenheimer.

In retrospect, I can think of lots of reasons why “no one” back home knows about Melba Phillips. Her decision to take the Fifth before the Senate’s McCarran Committee would not have seemed heroic to rural Hoosiers in 1952. She was a woman from a place more likely to celebrate male role models than women. She never married or had children in a time when both were expected. But most important: she left.

I left Vinson’s home simultaneously inspired by Phillips’s path and disturbed by my initial reaction to learning her background. Though it’s been almost twenty years since I left Indiana, I still bristle when people (from home or otherwise) express surprise at the fact that a farm girl like me ended up with a Ph.D. in history of science. Phillips almost certainly would have reacted the same way to that question of her own life.

I should know better. The uncommonly rich soil of the White River bottoms produces all sorts of things, only some of which are traded on the commodities markets. It always has, and always will.

___
Audra Wolfe is a writer, editor, and historian based in Philadelphia, though she insists on telling people she’s from Southern Indiana. She is the author of Competing with the Soviets: Science, Technology, and the State in Cold War America (Johns Hopkins Univeristy Press, 2013), and has contributed to Slate, The Atlantic, and The Guardian. She tweets as @ColdWarScience.