Picturing Pittsburgh: A Walk Through The Photo Files Of The Farm Security Administration

When the American stock market crashed on October 24, 1929, precocious Pittsburgh already knew quite a bit about roller coaster economies. The city’s laboring people had weathered the boom-bust cycles of panics and crashes that had plagued the American economy in the late nineteenth and early twentieth centuries. They also had a starring role in another American drama, labor versus capital, during the Homestead Strike in 1892 and again during the Great Steel Strike of 1919. After World War I, oil began to displace coal and automobiles began to supplant railroads. Pittsburgh, with its heavy economic dependence on coal and steel, was hurting before the crash, with unemployment at 10 percent. The city also was suffering the effects of rapid industrial growth — from unplanned urban sprawl to polluted rivers. 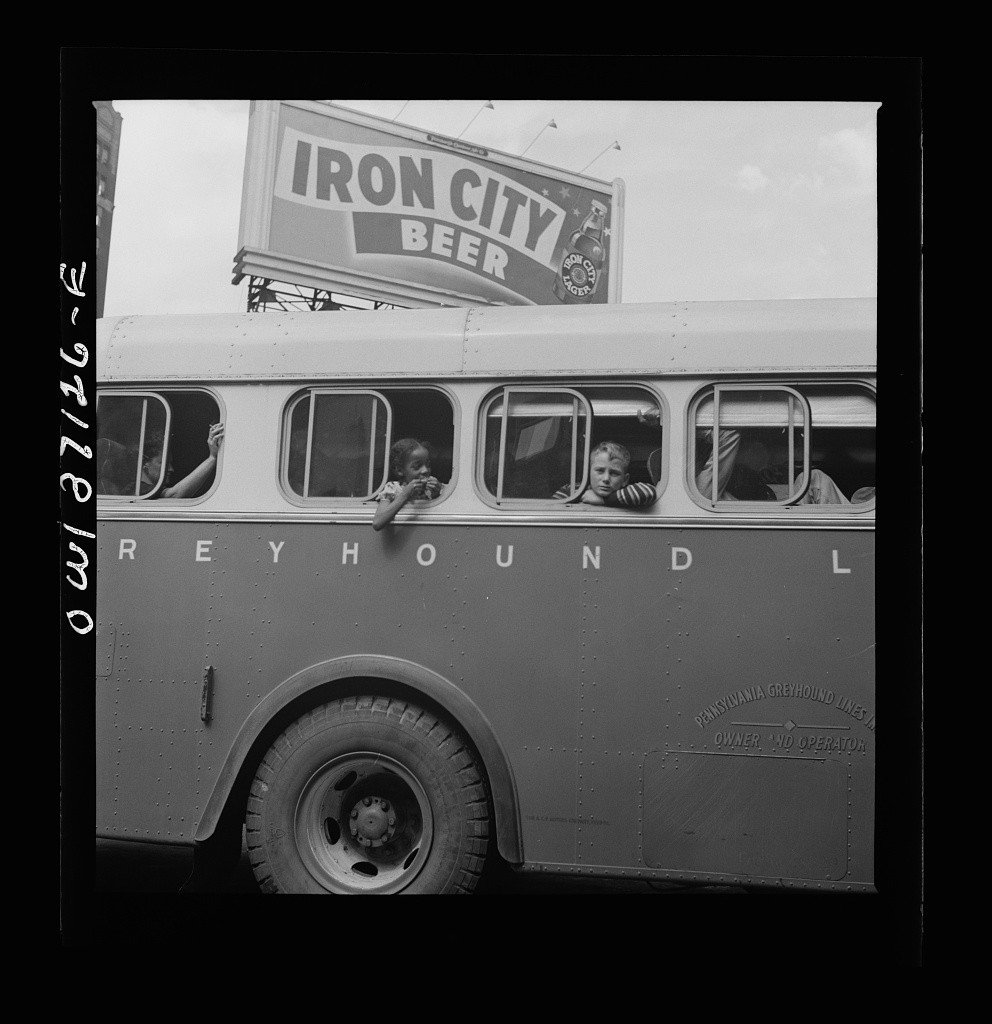 Esther Bubley, A bus ready to leave the Greyhound terminal, 1943.

All this and more shines through in the photographs of Pittsburgh produced for the Farm Security Administration. At the time these were documentary photographs, meant to serve as visual testimony of social and economic conditions. There’s a certain beauty in them, too, and much of the surprise and wonder about the FSA’s archive (which, with the start of World War II was renamed the Office of War Information and closed up shop in 1943) is the way its corps of photographers found beauty in a national economic disaster via the still-new aesthetics of small hand-held cameras like Leicas and Rolleiflexes. This year marks the 80th anniversary of the photographic survey project of the Farm Security Administration, and its precursor, the Resettlement Administration. 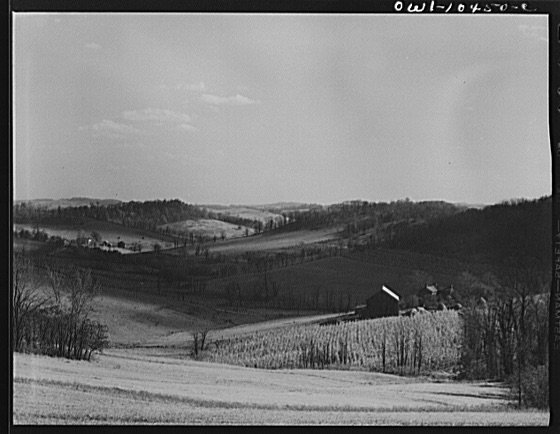 John Collier, Montour no. 4 mine of the Pittsburgh Coal Company, 1942.

Economist Roy Stryker took charge of the Historical Section’s Information Division in 1935 as Rexford Tugwell, head of the Resettlement Administration, sought out ways to document the positive effects of emergency government relief programs. This idea — of using photographs to communicate complex economic and environmental events through stories — is intuitive to us now. But in 1935 it was called social documentary, and it was new. Stryker had been drawn to photography as a way to illustrate complex economic issues since the 1920s. He was influenced by another photographer and reformer with ties to Pittsburgh, Lewis Hine, who had shot scenes of immigrant life for the Pittsburgh Survey, a full-scale sociological survey funded by the Russell Sage Foundation in 1907 meant to investigate industrial urban life and help instigate social reform. 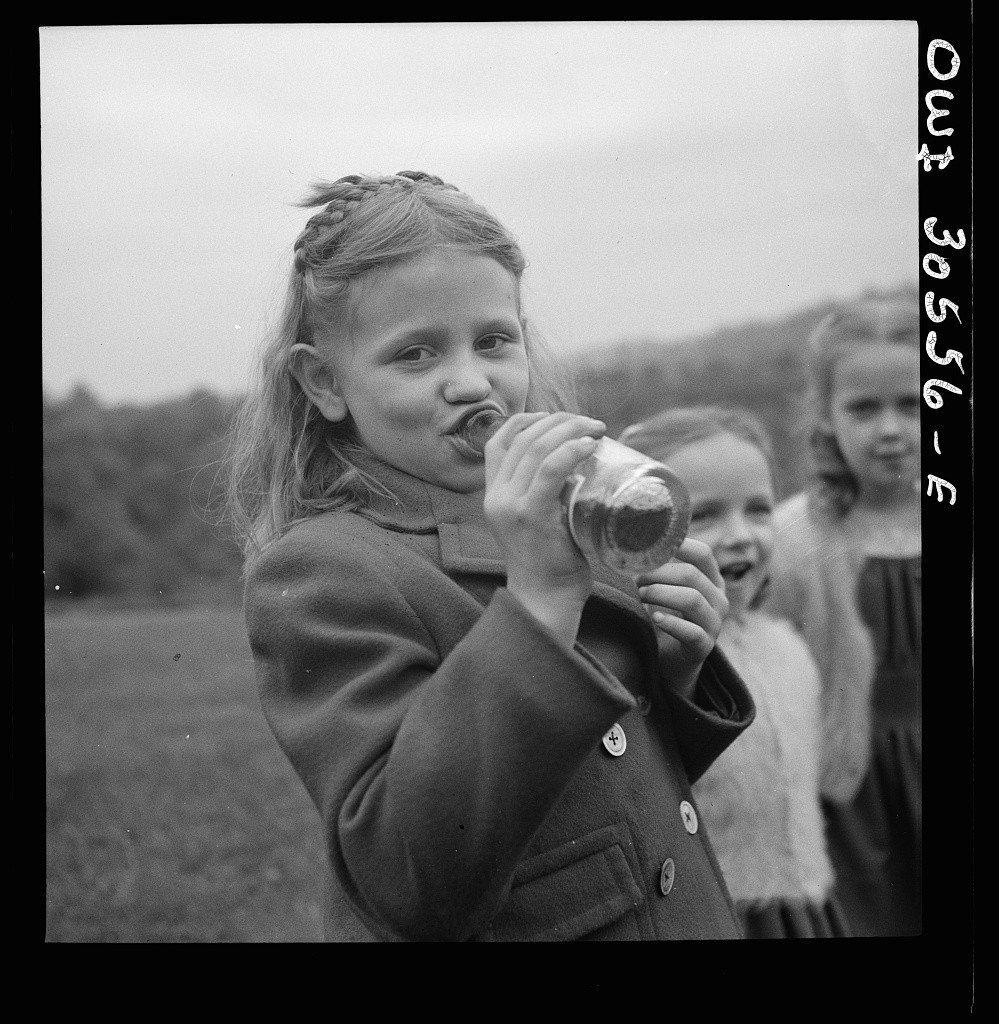 Marjory Collins, A child drinking Pepsi Cola before the service held on Memorial Day at the Lithuanian cemetery, 1943.

The FSA photographic survey began as a way to prove the worth of social services programs that were viewed as potentially socialistic and communistic. Later, after the U.S. entered World War II, the project of documenting American life continued, but this time with the intention of reflecting the country’s best qualities back to its citizens with even more nationalistic zeal. 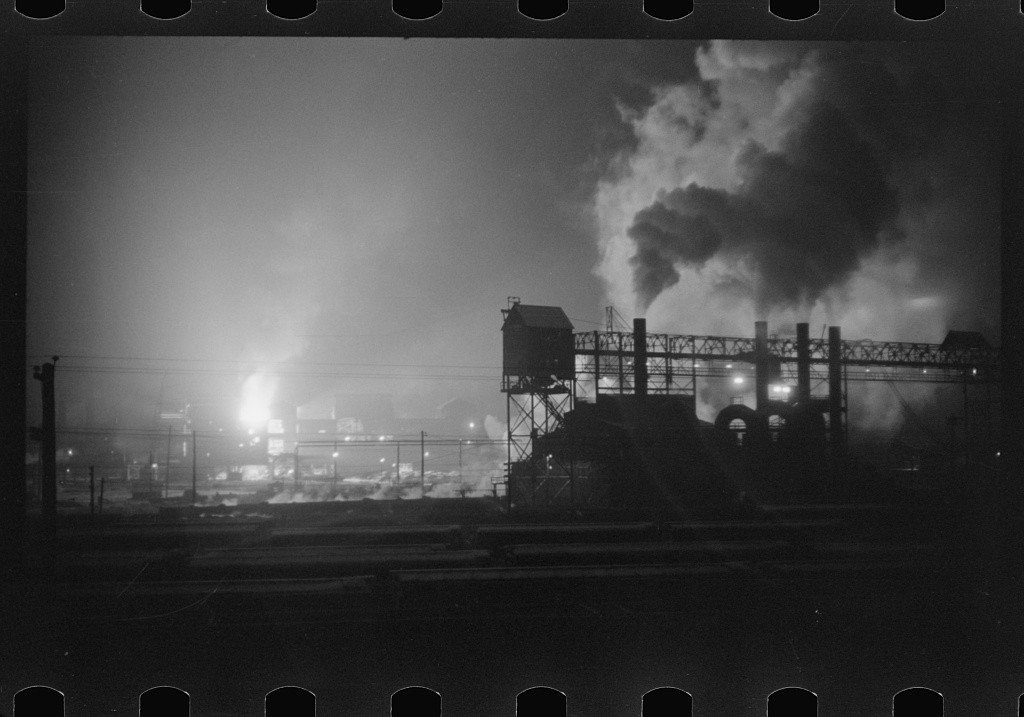 Stryker’s staff would become a who’s-who of American photographers, beginning most prominently with Walker Evans and Dorothea Lange, but also including Gordon Parks, Ben Shahn, Marjorie Collins, Marion Post Wolcott, Carl Mydans, Russell Lee, Sheldon Dick, Jack Delano, Arthur Rothstein, and John Collier. Many photographs from the FSA files are now imprinted on our collective imagination — Lange’s testament to transcendent motherhood in Migrant Mother and Walker Evans’ spare, discerning eye, directed at architecture and people, would come to define modernist photography as what he once called “lyric vernacular.” One measure of the FSA’s success might be that it elevated documentary to art. 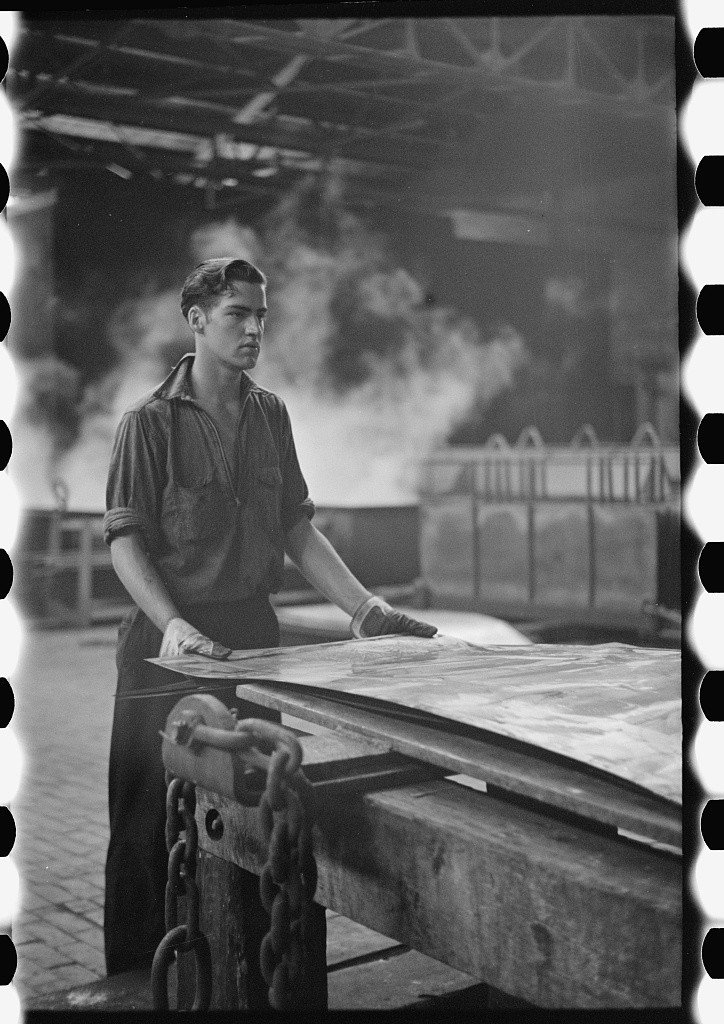 But one of the FSA’s lesser-known photographers, John Vachon, whose work is featured here, believed that the survey file was most valuable for its vast depth and breadth. Stryker was convinced that small-town life had the most stories to tell, and in many ways the Depression was a mostly rural story of failed agricultural policies and environmental degradation. 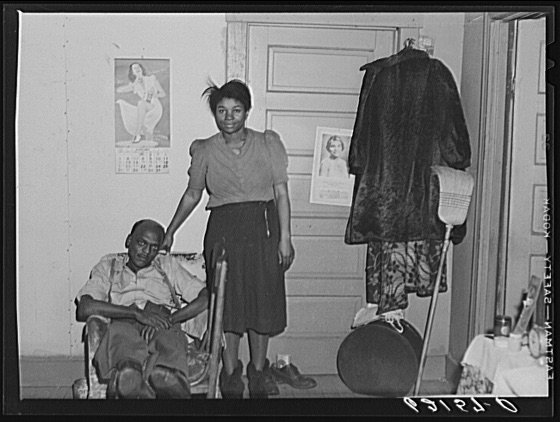 The FSA file has something to say, too, about twentieth-century urbanism and industry, although you need to dig a little deeper to find it. These photographs of Pittsburgh document not only the state of industry in the 1930s and the lives of working people, but also how national stories are projected onto smaller places—cities and regions and towns alike. Just let the words Allegheny and Monongahela and Ohio roll off your tongue and you literally hear the history of the land start to form, beginning with the Native American tribes from whom we took these place names — and the land itself. So the Rust Belt — as place and idea — is just the latest narrative to be projected onto the geography and people of what urban historian John Teaford calls the industrial heartland. 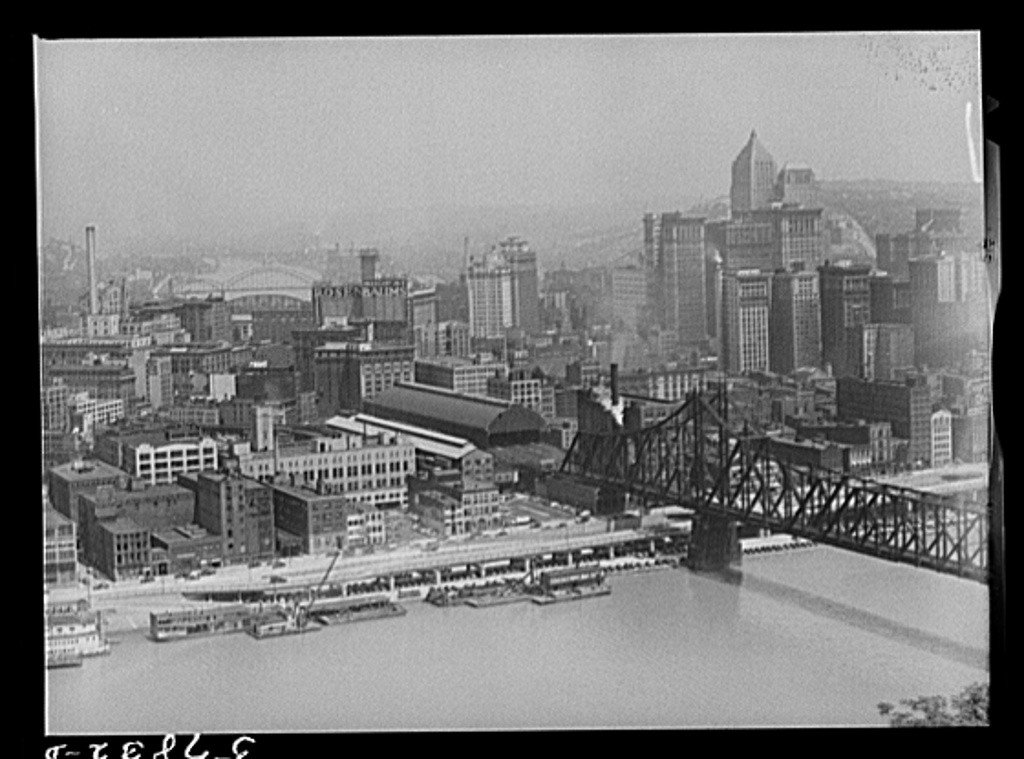 For Stryker, photographs were a means to illustrate a preconceived narrative. Using “shooting scripts” he would map out what he wanted his photographers to find and then put them on the road to find it. It’s a fitting coda that Stryker, after leaving the OWI in 1943, would go to work as a public relations man for Standard Oil, where he would lead corporate documentary and promotional projects to promote a positive image of the company until 1950. Esther Bubley and John Vachon would go on to work with him there, as well as several other FSA/OWI photographers. Stryker himself would land in Pittsburgh in 1950, to head up the Pittsburgh Photographic Project, yet another photographic survey, this time documenting Pittsburgh’s urban renewal. Stryker’s final documentary photography survey would be a public relations project on steel production for at Jones and Laughlin Steel, pictured here in photographs by John Vachon and Jack Delano. 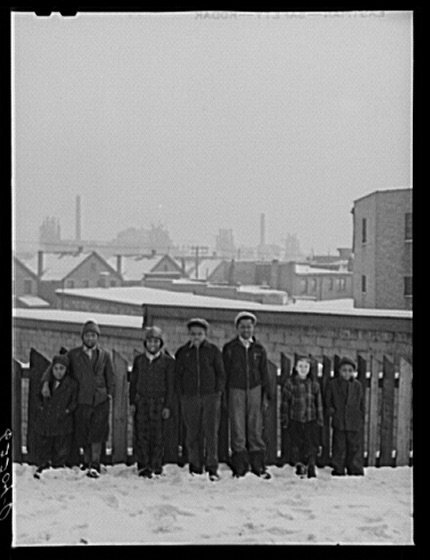 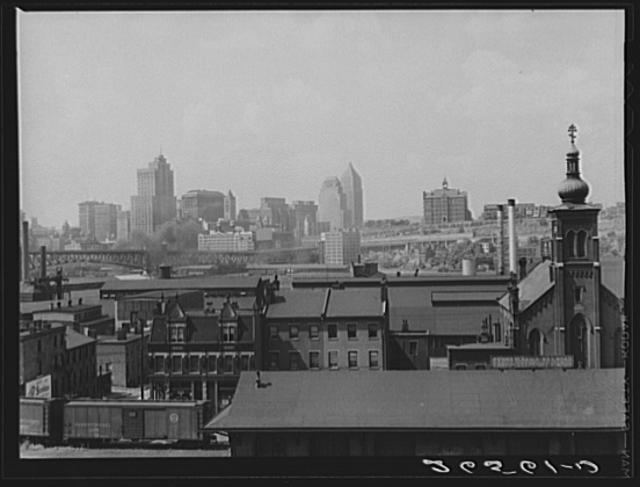 Arthur Rothstein, View of the city from Homestead, 1938. 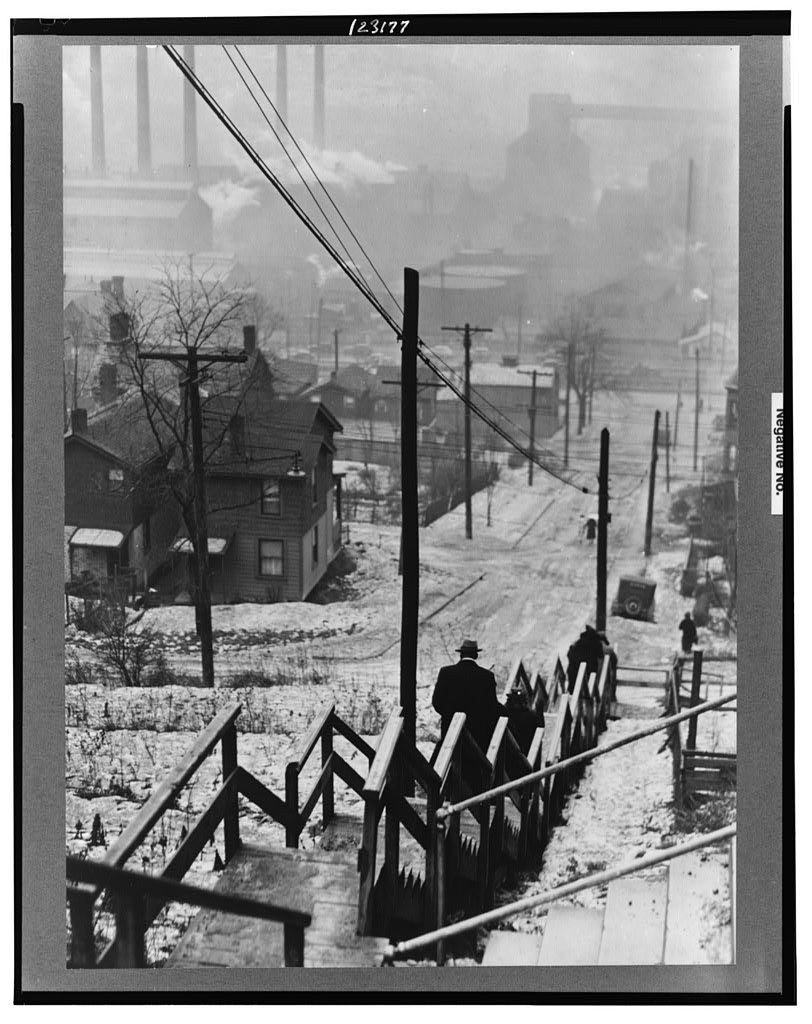 Jack Delano, In a working class section of Pittsburgh, 1941. 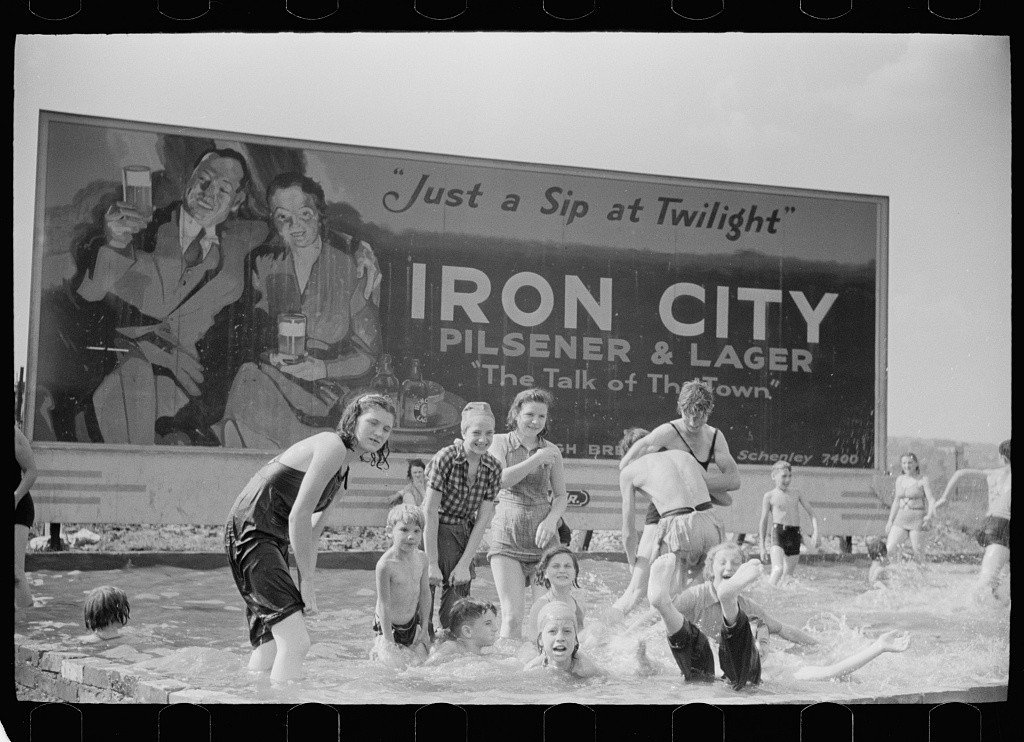 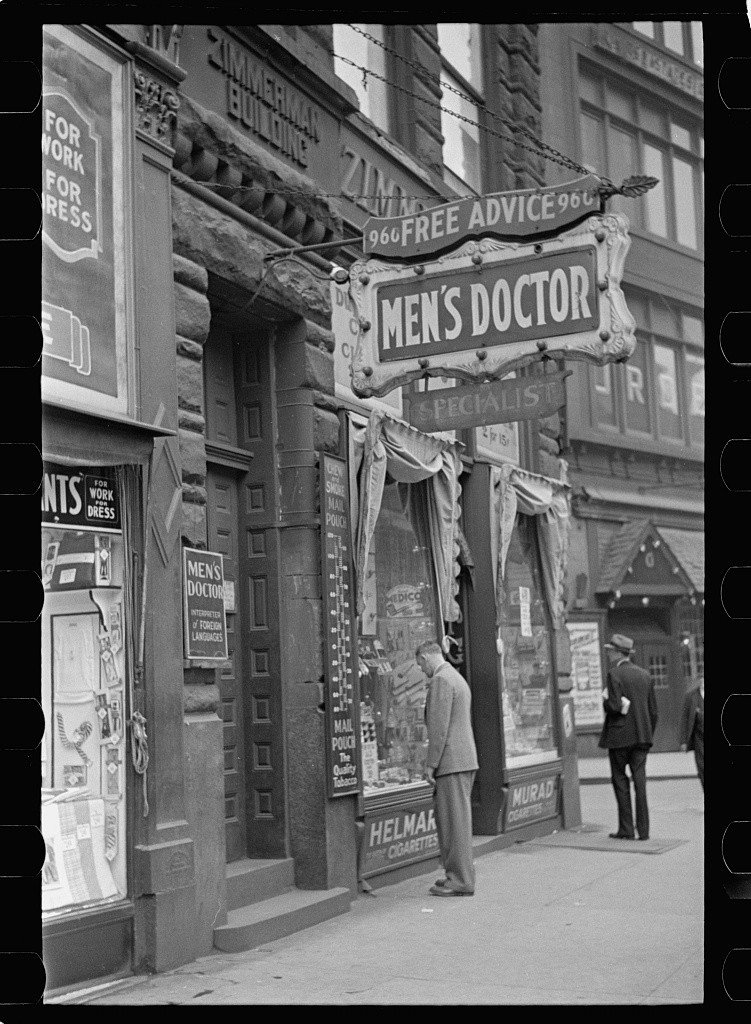 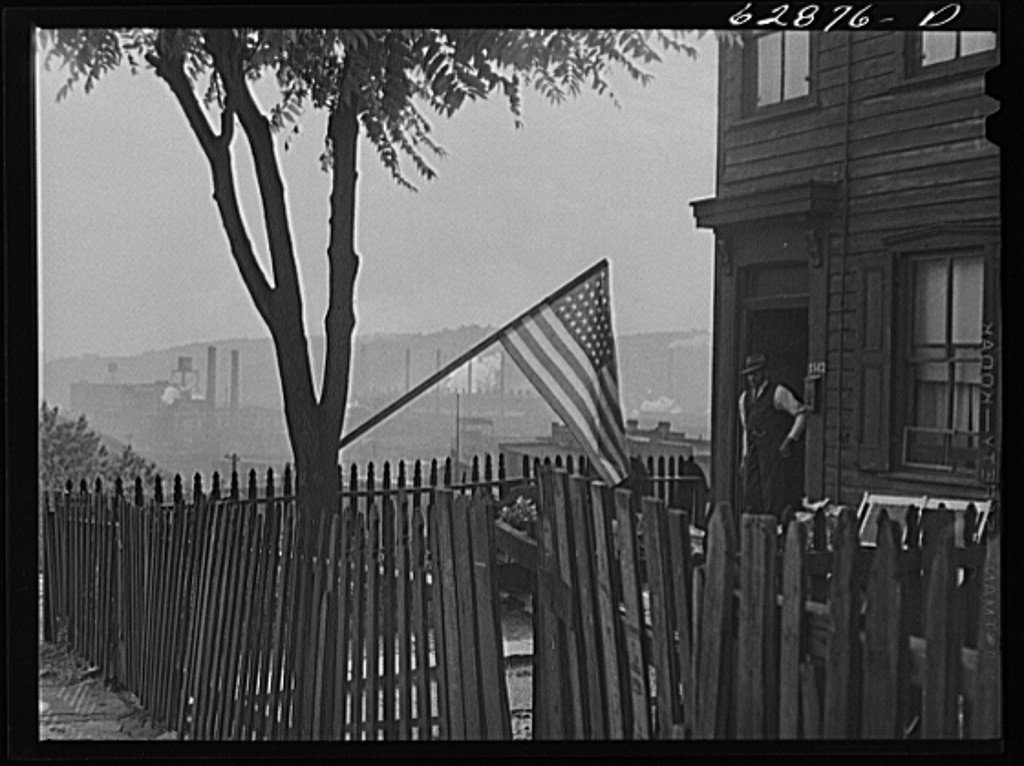 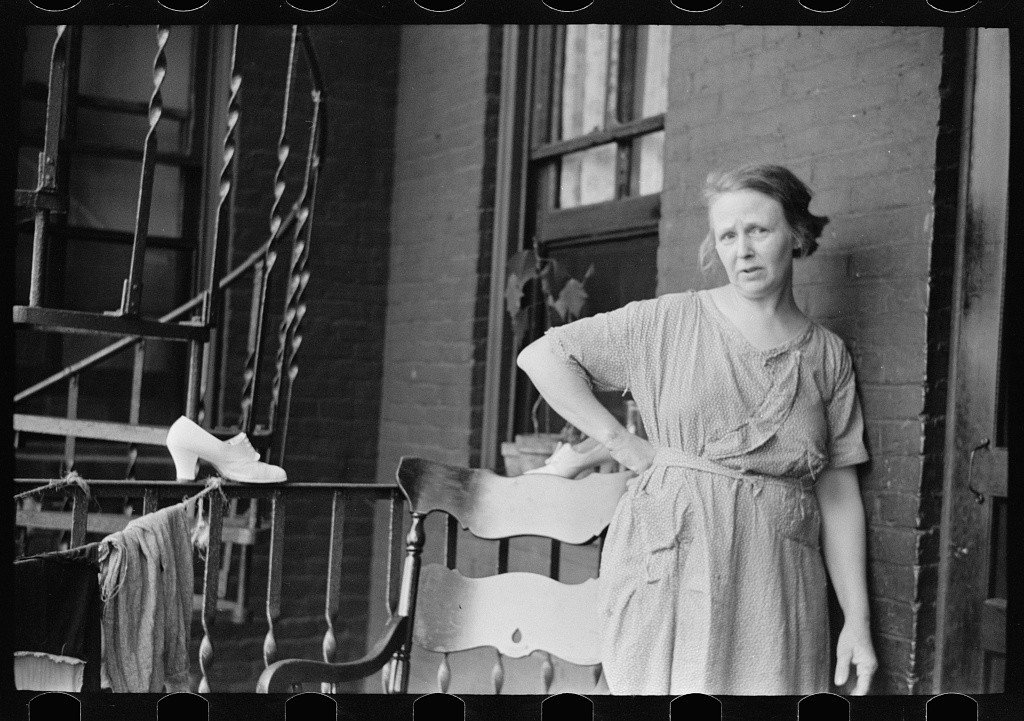 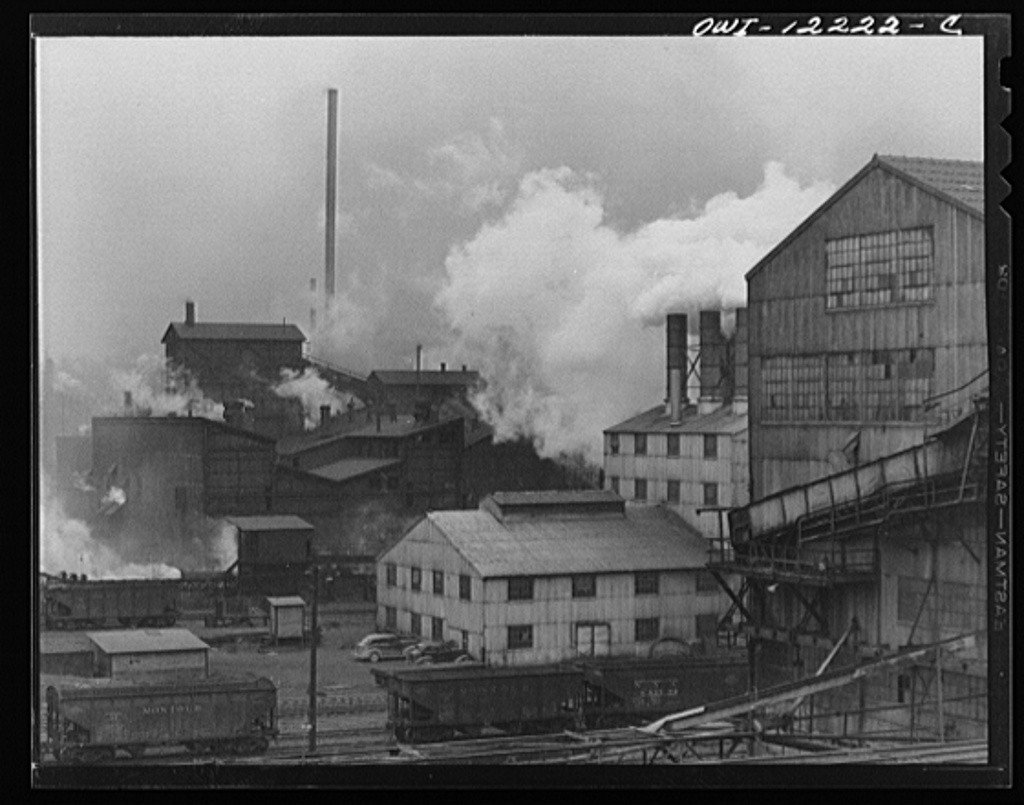 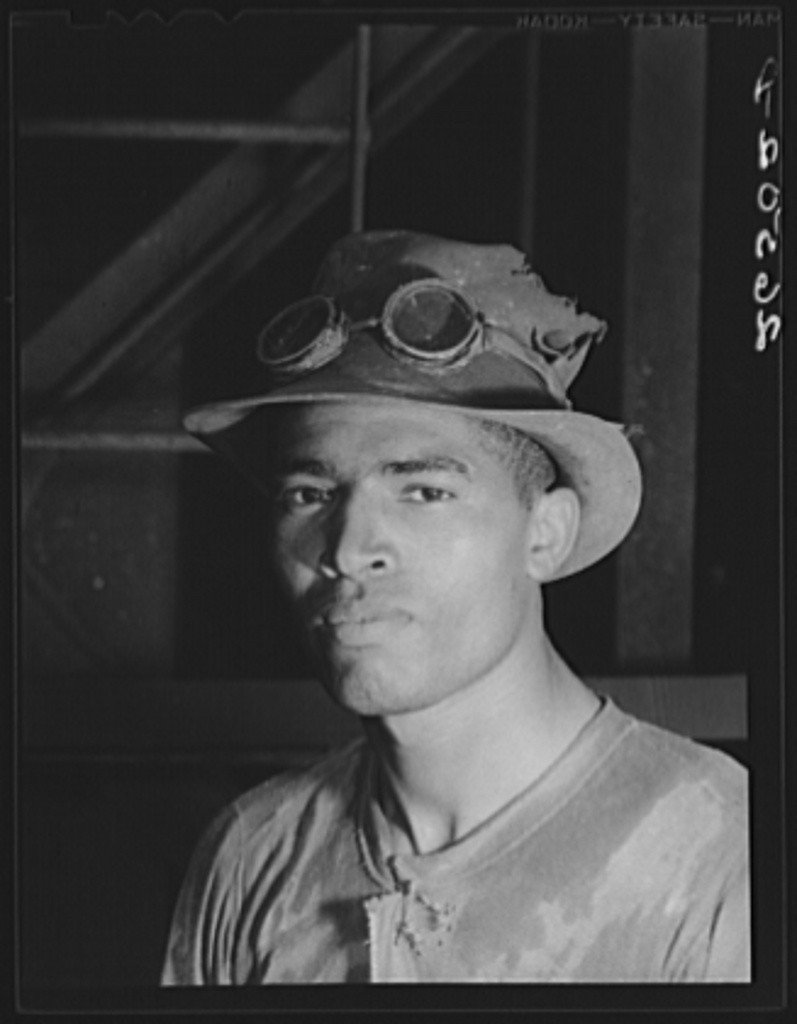 Esther Bubley studied photography at the Minneapolis School of Design, worked briefly for Vogue, and first worked for the FSA as a darkroom assistant before getting her own shooting assignments. Her photographs here are from a photo-essay of a Greyhound bus trip that started in Washington, D.C. and stopped in Pittsburgh.

John Collier studied photography at the California School of Fine Arts. While he was largely self-taught in photography he studied a bit with Dorothea Lange. His photographs here are from his work photographing the Montour No. 4 Mine near Pittsburgh. His later work essentially invented the field of visual anthropology.

Marjory Collins began her photojournalism career in New York City in the 1930s working for magazines and the major photo agencies (unusual for a woman at the time). She joined the U.S. Office of War Information to document home front activities during World War II.

Jack Delano was the Americanized name of Jacob Ovcharov, who emigrated to the U.S. from Ukraine as a child.  He studied magazine illustration at the Pennsylvania Academy of Fine Arts before picking up a camera on a trip to Europe to study art. Delano’s first documentary project of bootleg Pennsylvania coal miners was funded by the Works Project Administration-Federal Arts Projec in 1938. On the strength of those pictures, modernist photographer Paul Strand recommended him to Roy Stryker for a job with the FSA in 1940.

Arthur Rothstein was the first photographer hired when Stryker started the Resettlement Administration documentary project. He spent 5 years photographing for the RA and the FSA and then became a staff photographer at Look magazine. Like John Vachon, he concentrated on the effects of the Depression on the steel towns of Western Pennsylvania.

John Vachon was self-taught in photography. He joined the FSA in 1936 as a messenger, eventually becoming a staff photographer first for the FSA and stayed on with the OWI until it closed in 1943. His work in Pennsylvania centered on the steel towns of Western Pennsylvania. He went on to work with Stryker at Standard Oil and to shoot for Look and Life magazines.

Marion Post Wolcott was a prolific photographer for the FSA between 1938 and 1942. Wolcott worked as a freelancer and newspaper staff photographer in 1937 and 1938, and had ties to the radical and activist Photo League of New York.

Andrea Volpe writes frequently about culture and history from Cambridge, Massachusetts.  Read more at andrealvolpe.com and follow her on Twitter @andrealvolpe.