Pittsburgh was once a Black Muslim refuge. Here’s one family’s story.


Growing up as an African-American kid in Braddock, Ali R. Abdullah didn’t think too much about Islam. He had an Arabic name, and he didn’t eat pork. That was about the extent of it.

On our Zoom call, Abdullah laughs, but he’s clearly pointing to something serious, something missing from his upbringing. Now forty-seven, he’s the disability compliance administrator for the Housing Authority of the City of Pittsburgh and also the father of six kids. The “R.” in his name is important: it helps distinguish him from his father, also Ali Abdullah, who was Braddock’s first African-American mayor.

By the time Abdullah was an adult, that thin take on his Muslim identity felt less satisfying. “Imagine going through your life and only knowing one aspect of yourself,” he said. Learning about Blackness was hard enough. Learning about Islam felt near impossible. “It was like a dark hole to my life.” 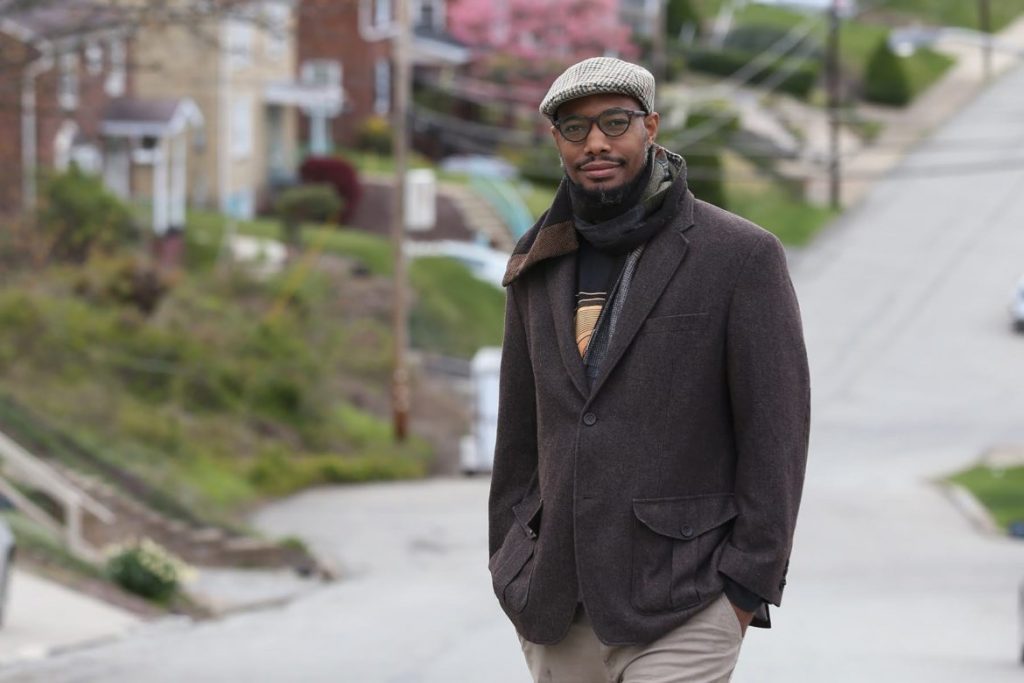 Ali R. Abdullah, forty-seven, of Lincoln Place, is the founder of the Islamic Historical Society of North America, a group dedicated to documenting the history of Black American Islam. For Abdullah, the project is personal: His grandparents helped transform Pittsburgh into a hub of Black Muslim activity in the 1930s. (Photo by Ryan Loew/PublicSource)

This story was originally published by PublicSource, a partner of Belt Magazine.

As a young adult, he decided to take matters into his own hands. He took a class in Arabic, became a regular at the masjid or mosque and listened to a lot of Black Muslim hip-hop artists. He also studied the history of slavery. To his surprise, he realized some ten to thirty percent of enslaved Africans in the United States were originally Muslim until nearly all were forced to convert to Christianity. “It just brought everything home,” he said. The seemingly disparate pieces of his identity — his race, his religion — actually fit together in a coherent story. That story had just been stamped out by racial and religious oppression.

At the same time, Abdullah began uncovering details of a second moment in Black Muslim history — a moment in which Pittsburgh played a key role. Abdullah’s introduction to that history began with his own grandfather, Ibrahim Alamed Deen.

Ibrahim Alamed Deen, then Leonard Fluker, was no more than thirteen years old when he left Alabama for Pittsburgh with his mother and sister. It was the early 1920s. His father had left them, and, facing the realities of Klan violence and discrimination in the South, his mother decided to move the family north. They became part of the mass movement of Black Americans known as the Great Migration. Soon after they arrived, his mother died, leaving him and his sister to fend for themselves in a city they hardly knew. 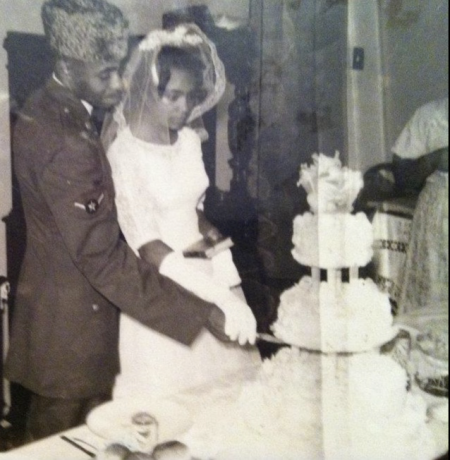 Abdullah’s parents, Ali Abdullah and Rasheeda Deen, cut the cake at their wedding in Braddock, 1961. The ceremony was officiated by a famous Sheikh from New York. (Photo courtesy of Ali R. Abdullah)

Many people would have crumbled under the pressure. But Ibrahim Deen was no ordinary figure. His curiosity was insatiable. Once he set his mind to learning something, not much was going to stop him.

That curiosity may help explain his conversion to Islam, which is otherwise something of a mystery. Possibly he and his sister learned about Islam through an organization like the Universal Negro Improvement Association, which taught pan-African unity and celebrated African history. In any case, by age fourteen, Deen was dabbling in several pseudo-Muslim sects. Within a decade, he would identify as Sunni Muslim, an orthodox tradition.

Islam wasn’t an easy faith to access at the time. Most Islamic texts of the era were written in Arabic. But Deen was determined. He taught himself the language. He attended lectures when visiting scholars came to town. He began to study under Dr. Yusef Khan, an Ahmadi Muslim scholar from India who took on several Black American students and trained them to be local community leaders and ambassadors to other cities.

Deen’s advanced learning made him invaluable in Pittsburgh’s growing Muslim community. There had been Black Muslims in Pittsburgh since at least the early 1900s. (Some tombstones of the era bear traditional Black Islamic names, names also scratched on the walls of slave ships from the Middle Passage.) Yet, prior to the 1930s, most Black Muslim activity in Pittsburgh was decentralized: a person here, a small group there.

Through Deen’s and others’ leadership, these individuals began to organize.

In the early 1930s, Pittsburghers established one of the first Black-supported mosques in the United States: al-Masjid al-Awwal, or the First Muslim Mosque. Although it wouldn’t acquire its name and charter until 1945, by 1934, the community already had more than a thousand members. 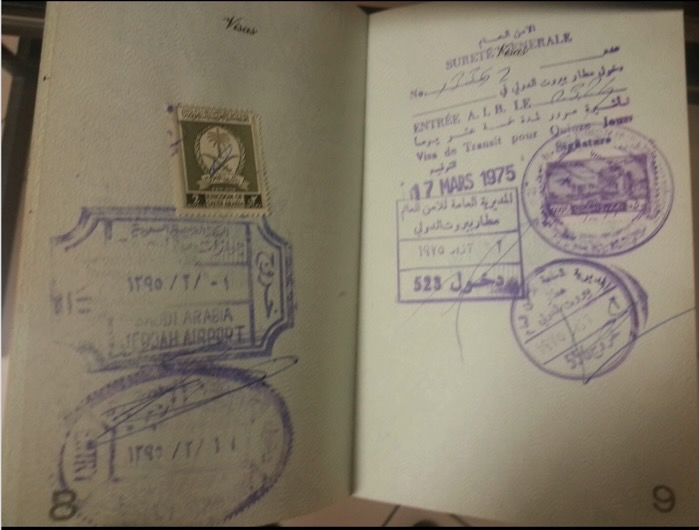 The stamps in Ibrahim Deen’s passport show the extent of his travel, including a holy pilgrimage to Saudia Arabia in 1975. (Photo courtesy of Ali R. Abdullah)

As for Deen, Islam afforded him opportunities he never would have imagined, growing up in the South. The people in his community came to call him Sheikh Deen, an honorific title usually reserved for Muslim religious scholars. He networked with religious leaders in New York, Cleveland, New Jersey and Chicago. He ate new foods from multiple cultures. In the 1970s, he made the Umrah, a holy pilgrimage to Mecca.

Through it all, Pittsburgh offered a hub of intellectual, spiritual and social energy. The city was a refuge, said Sarah Jameela Martin, a local historian of Black Islam. It had a reputation. Black Muslims in the early 1900s would come there looking to be part of its pioneering community.

Years after Ibrahim Deen died, his spouse Maneera Deen wrote a memoir about her family’s experiences. Born Adelaide Douglas to a conservative Christian household, Maneera Deen had no obvious reason to convert to Islam. It was socially taboo. It would create tension in her family. It would make her a “double minority,” an “other within an other.”

Yet she still made the decision. In the memoir, she chronicles her own leadership in Pittsburgh’s early Muslim community: her volunteer work with the Red Crescent Club, a Muslim charity, for example, and her role hosting prayer groups in her home.

Abdullah turns the pages of the handwritten memoir carefully. Perhaps, he speculates, looking at the faded writing, her turn to Islam felt more like a return, a “natural migration” to an ancestral place. 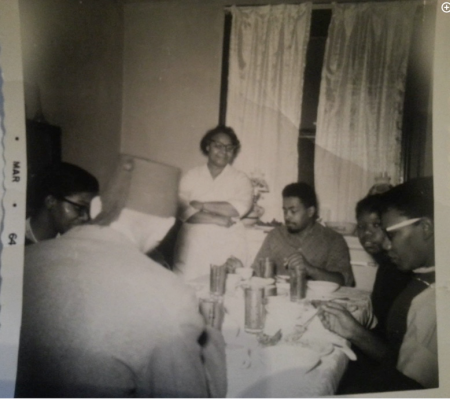 Then again, he admits, perhaps that’s just a projection of his own convictions.

Today, almost a century after Ibrahim Deen arrived in Pittsburgh, Abdullah is the founder and director of the Islamic Historical Society of North America, an online community dedicated to preserving and sharing the history of Black Islam, especially its orthodox varieties. In the 1950s and 60s, Malcolm X and Muhammed Ali helped popularize the Nation of Islam, a militant Black nationalist movement that has since, sometimes, been designated a supremacist group. Abdullah senses the Nation’s prominence in the public eye overshadows orthodox Black Islam’s longer, more complex history. He wishes to recover that other story.

His current project is a digital archive of family photographs. His dream project? A physical museum dedicated to preserving Pittsburgh’s early Black Muslim history. He hopes his work as a historian lends visibility to stories that need to be heard. Knowledge shouldn’t just be theoretical, he said. “Hopefully it can benefit people in a constructive way.” ■

To learn more about Ali R. Abdullah’s story, check out PublicSource’s podcast From the Source. In the episode “Pittsburgh’s Black Muslim history uncovered,” host Jourdan Hicks and Abdullah discuss his experiences as an African-American Muslim man in Pittsburgh and whose versions of Pittsburgh history get told.

Chris Hedlin is PublicSource’s faith and religion reporter. She can be reached at chris@publicsource.org.

Cover image: Abdullah has organized and digitized photos of his family members and their Pittsburgh Muslim community from the mid-twentieth century. (Photo by Ryan Loew/PublicSource)