Why Pittsburgh Needs the Paris Agreement

On the city’s long history of industrial pollution, and how Ted Cruz gets it wrong


In the 1950s, the author Stefan Lorant asked former Life magazine photojournalist W. Eugene Smith to create a series of photographs for his book Pittsburgh: The Story of an American City. Smith, one of the most talented photographers of his generation, had already produced stunning portfolios chronicling subjects like the Battle of Okinawa, the work of a country doctor in rural Colorado, and Albert Schweitzer’s practice in west Africa, and expected the Pittsburgh project would take a few weeks. He ended up spending three years on the project. And rather than producing the agreed upon hundred photos, he delivered more than seventeen thousand negatives. As an artist, Smith had the eye of an Italian Renaissance painter, a sense of chiaroscuro that made him like Caravaggio with a camera.

“Smoky City,” a photograph from the series taken in 1955 or 1956, is a tutorial in Smith’s sense of light and dark. Appearing to have possibly been taken from Schenley Park’s Panther Hallow Bridge, the central neighborhood of Oakland—which had been a preeminent example of the City Beautiful movement at the turn of the century—is laid out before the viewer, a neo-classical landscape framed by the gothic skyscraper of the University of Pittsburgh’s Cathedral of Learning. No detail is visible on that building, however, nor on the Catholic Church’s diocesan seat of St. Paul’s Cathedral, her twin spires punctuating the horizon. For across Oakland’s landscape is smeared a thick glop of smokestack black. The photograph was taken at noon, but the sky is as dark as night. When I say that we know something of pollution in Pittsburgh, it is born from experience.

Last week, Texas Senator Ted Cruz, preeminent whip in the Sedition Caucus of the United States Congress, perhaps in an attempt to be named new King Troll of Twitter, tweeted, “By rejoining the Paris Climate Agreement, President Biden indicates he’s more interested in the views of the citizens of Paris than in the jobs of the citizens of Pittsburgh.” There are all sorts of problems with this statement, beginning with the rank hypocrisy of a man who, just a few weeks ago, tried to overrule the will of Pennsylvania voters (and inspired an insurrection in the process) suddenly pretending to care about the people of this city. But there is even more to unpack, from the elite Harvard graduate’s willful misunderstanding of the Paris Agreement (which, of course, is not about the opinions of the residents of France’s capital) to the sycophantic, embarrassing mimicry of a 2017 speech by Trump (which I commented on that year in this magazine).

Pittsburgh was then, and is now, a victim of alliteration. Had the climate accords been signed in Berlin or London, then Buffalo or Lansing would now be getting this attention. It’s an important lesson in the problems with rhetorical affectation, especially when it’s as hollow and ill-informed as Cruz’s. The struggle to improve air quality in Pittsburgh is real, and in that sense Cruz’s symbolic Paris and the real Pittsburgh have much more in common than he could ever know. Because here is what Cruz doesn’t understand about this city; here’s why he should take a good look at the Gotham in Eugene Smith’s photograph: Pittsburgh was, and in many ways still is, the poster city for a world without environmental regulation. And we want things to get better, not worse.

We don’t come to this environmental advocacy lightly. In Devastation and Renewal: An Environmental History of Pittsburgh and its Region, Joel Tarr gives a visceral description of Pittsburgh during the halcyon days of several decades ago, describing “flaring of waste gases and columns of black smoke… plumes of white steam that rose as the red-hot coke was cooled… Since the plants worked twenty-four hours a day, these plumes constantly appeared in the visible landscape,” where on a “windy day, the odor of sulphur would carry far beyond the mill communities into middle-class neighborhoods.”

By the time Smith’s photograph was taken, Pittsburgh had actually already seen a ninety percent decrease in air pollution from a decade before, thanks in large part to the advocacy of New Deal Democratic Mayor David L. Lawrence. A half-century earlier, a 1906 Chamber of Commerce report read: “With the palls of smoke which darken our sky continually and the almost continuous deposits of soot, our dirty streets and grimy buildings are simply evidences of the difficulty under which we labor in any endeavor to present Pittsburgh as an ideal home city.” 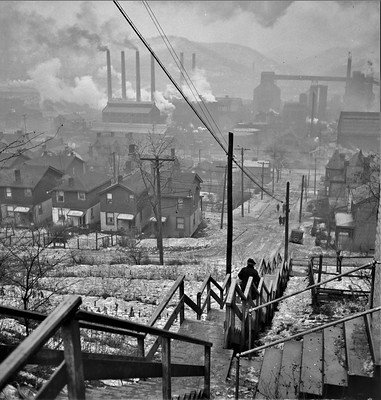 In the Pittsburgh of the first half of the twentieth century, it was impossible to wear clothing that by mid-day wouldn’t be covered in a thick layer of grimy, black soot; in that Pittsburgh, every surface—in homes, businesses, places of worship—would be dyed black by the smog; in that city, residences required a separate basement entrance (often with a shower and almost always a toilet) so that people wouldn’t sully their homes with filth from the mills’ exhaust. In 1948, industrial effluent from American Steel and Wire Works got trapped in an air inversion in the Monongahela River, and when the resultant bubble rose to the surface it suffocated to death nearly a hundred women and men in the town of Donora.

In my upcoming book An Alternative History of Pittsburgh, I describe a landscape that was an “oily, dark, dirty, grimy, besotted and coal-filled valley of concrete and brick; a city of perpetual midnight.” The city has tried, in recent decades, to wash away that image—sometimes literally. During the years of big steel’s collapse, I recall the University of Pittsburgh’s beautification project in Oakland, the Cathedral of Learning’s Indiana limestone sandblasted clean from its previous color of midnight. But on the Carnegie Library across the street, one divot in its outside wall is black, left as a reminder of what the city was like some five decades ago.

Pittsburghers embrace a mythology of economic reinvention—there is, after all, much to be proud of in the city that produced more steel than any other place in the country, that acted as the Arsenal of Democracy during the Second World War, that helped birth the modern labor movement. But when outsiders play with those tropes, they’re inevitably condescending. As Cruz’s goofy Twitter rhetoric has it, Pittsburgh is a lunch-pail, six-pack, shot-and-a-chaser, rough-and-tumble, blue-collar town where the mere mention of a place like France—coded by Republicans as prissy, uppity, cosmopolitan—would drive us to a foaming rage. But—and I write this as someone whose grandfathers were both members of the United Steelworkers (one was also in the Young Person’s Socialist League)—asking us to ignore climate change by appealing to our industrial past is as offensive as pretending that everyone in Seattle is a logger, or all of Texas is composed of cowboys.

Certainly, the current city leaders prefer a different view, one of a Pittsburgh transformed by the “Eds and Meds” of higher education and the health industry. But that can be similarly misleading. Pittsburgh is more pristine looking today than it was in 1955, but even though we no longer have to wipe the soot from our faces and the dirt from our clothes, that doesn’t mean that the city is some unspoiled Eden. In terms of short-term particle pollution, we rank number sixteen for metropolitan areas in the United States, and for ozone smog we’re at twenty-six. For year-round particle pollution (essentially soot), Pittsburgh is eighth worst city in the country, beating out Detroit, Cleveland, and notoriously smoggy Atlanta, and closing in on Bakersfield, Fresno, and Los Angeles. The city’s abysmal record on pollution is almost single-handedly due to the output of the Clairton Coke Works, the Edgar Thomson Steel Works, and the Irvin Plant. And climate change affects—and will continue to affect—Pittsburgh just like every place else. So, the concerns of Pittsburghers and Parisians are not so different.

In fact, Pittsburghers desperately need massive environmental action. The city has yet to reckon with how our industrial past contributed to the poisoning of land and water, particularly in Black, brown, and poor communities, which suffer disproportionately from the effects of environmental racism. In 2017, Pittsburgh Mayor Bill Peduto, and the mayor of Paris, Anne Hidalgo, co-authored an editorial in the New York Times in response to Trump’s original crime against alliteration. It included the following claim: “We Pittsburghers are proud of our industrial history, but we are preparing for a prosperous future. That means addressing our air quality, which remains among the worst in the nation. That means ensuring that the shift to sustainable infrastructure tackles inequality between communities. And that means taking climate change seriously.” (It should be said that many of us also wish the mayor’s office was taking inequality more seriously in the past four years).

No amount of Lone Star grandstanding can scrub the soot of Pittsburgh’s industrial legacy from our homes and bodies. The house I grew up in was built of white granite, but it remains black. At least a quarter of the homes on my childhood street have been similarly affected by whatever is in our air, our water. It’s the legacy that built the United States, and the legacy of the third most incidents of cancer in the country, where half of the residents know somebody who has died of the disease, and an astounding twenty percent will ultimately succumb to it. I would need three hands to count the number of my friends who have, in their twenties and thirties, had to bury a parent with cancer. My own father passed from a rare form of blood cancer a half-decade ago.

This is the sacrifice Pittsburghers made for the strength of the nation—and not always willingly. That Cruz and Trump would symbolically enlist us in a campaign to make the whole world kindling for rapacious economic growth, one that would return us to our grimier, sootier former days, is so offensive as to be obscene. ■

Ed Simon is a staff writer for The Millions and author of An Alternative History of Pittsburgh, forthcoming from Belt Publishing.