Of course, I’ve been saying “Fuck Donald Trump” pretty much every day over the last eighteen months, ever since he descended that gaudy, gilded elevator on Fifth Avenue in New York to announce his candidacy. And as president, he’s done a hell of a lot more than tweet stupid things. He’s put forth an unconstitutional, un-American religious test for immigrants; handed out government jobs to family members and Goldman Sachs executives; and recently announced that he’ll be doing his damndest to ensure climate change kills most of us over the next century. Plus, you know, the whole treasonous collusion with Russia thing. In the grand scheme, Trump’s declaration that he “was elected to represent the citizens of Pittsburgh, not Paris” is relatively minor.

[blocktext align=”right”]If Trump is going to pretend that he represents Pittsburgh, then I want him to understand what Pittsburgh really is.[/blocktext]But goddamnit, when he said that stuff about Pittsburgh it pissed me off in a special, yinzer kind of way.

Trump’s goofy rhetorical construction reflects how little he knows about the city of my birth, the city that raised me and nurtured me. He was happy to use us as a convenient signifier for some bullshit Rust Belt nostalgia that bears no resemblance to this place, the one that overcame the collapse of steel (which, I’ll add, was brought on not by environmental legislation but by Reaganite economic policies); a place that’s scrappy and tough, yes, but also creative; a place built by immigrants like my grandparents, which sometimes falls short of being as diverse or tolerant as it could be, but which — like the country it’s part of — is always trying to attain a more perfect union.

Trump reduces Pittsburgh to the area that surrounds it, ignoring the fact that the city went 80% for Hillary Clinton (who also garnered three million more votes that Trump nationally). His understanding of the city is a Budweiser ad — all flags and eagles and bullshit. Trump touts the identity politics of “beleaguered” white men, and seems to only care about representing what he thinks he knows about that group. If, as Trump claims, he “represents the citizens of Pittsburgh,” does that include a hijab-wearing young woman making nightly prayers at a mosque in Oakland? Does that include the Mexican grocer who lives in Brookline? The drag queen renting an apartment off Ellsworth? The anarchist book study group in Bloomfield? Or does it only refer to his sepia-toned fantasies of burly, blue-collar steelworkers? 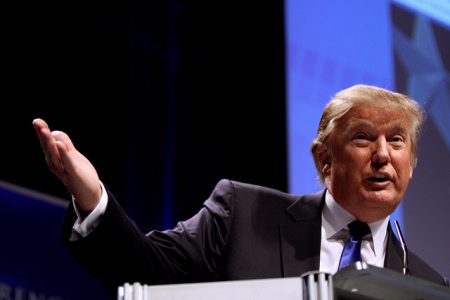 Fine. I’ll put on my imaginary hard hat and play along. I come from Pittsburgh, even if I’ve since become part of the ‘coastal liberal elite’. I am still a voting citizen of today’s Pittsburgh, am aware of the city’s past, and mostly proud of it. There is my grandfather, who immigrated to this country from Abruzzi and worked alongside his father as a stonemason. Or his wife, my grandmother, who told me about a cross burnt by the Klan on the lawn of her Italian Catholic Church. Or my godfather and great uncle, whom we called ‘Sunday,’ a proud union worker at Rolling Rock Beer, a Democratic organizer in Latrobe, and an endlessly joyful man. Though he was born in the 1920’s, Sunday told me in 2001 that he looked forward to one day voting for Hillary Clinton as the first woman president of the United States.

If Trump is going to pretend that he represents Pittsburgh, then I want him to understand what Pittsburgh really is. And Pittsburgh isn’t just people like me. Cities are made by the endless shifting, the ever-arriving immigrants, and the mercurial magnificence of change. It’s that girl in the hijab, the Mexican grocer, and the drag queen. And, thankfully, Pittsburgh’s population has finally been growing again, precisely because she has figured out how to be a new city in a new economy. Fitfully, and not without some pain, Pittsburgh has been trying to become a city for all her citizens (in a way that Trump could never be a president for all Americans). Pittsburgh is simply too broad for Trump to get those little hands around.

I know about the anger at ‘flyover country,’ and I get it. There can be a sense that Trump’s victory is solely the responsibility of those that live in Pennsylvania, or Michigan, or Wisconsin. For those of us who grew up in the Rust Belt – which, for its many faults, also historically had a strong strain of its own left-wing politics – it was upsetting to wake up on November 11thin a state newly red. But that anger over who is responsible for a creature like Trump is the same anger that I sometimes feel when I’m in New York and see the Trump name on so many hotels and apartment buildings. It’s the sense that Trump as American monstrosity is our collective responsibility.

Pittsburgh was great in the past; it’s better now. Trump, in rejecting the Paris Accord, seems to want to turn the entire world into what Pittsburgh finally pulled itself away from a half-century ago. So when Trump says he wants to be a president for “the citizens of Pittsburgh,” we did, have, and will continue to say, “No thanks.”

Ed Simon is the assistant editor of The Marginalia Review of Books, a channel of The Los Angeles Review of Books. His work has appeared, in among other places, The Atlantic, The Paris Review, Salon, Nautilus, Aeon, LitHub, and Belt Magazine. He holds a PhD in English from Lehigh University, and can be followed at his website, or on Twitter @WithEdSimon.