The record store was about two miles from our neighborhood and about one mile beyond the city limits. As teenagers a friend and I would go there whenever we had a little money – or even when we didn’t but instead had some records we were willing to trade in or sell. Soon after he and I crossed the border between Detroit and its northern suburbs on our bikes one summer afternoon, two police cars, lights flashing, stopped in front of us, blocking our path. One of the officers said a bike like the one my friend was riding had been reported stolen and that my friend fit the description of the thief. I don’t know what we said to convince them that my friend was indeed riding his own bike, but we were eventually permitted to continue on our way. I don’t recall if we went on to the record store that day or turned around and headed home. 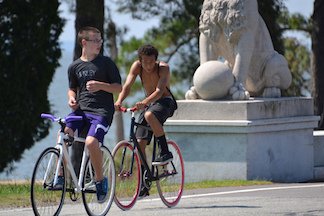 I never went to dances at my high school. My closest friends then went to other schools, and those kinds of events weren’t really our scene. Nevertheless, one night, when a friend and I were heading to the home of another friend who lived near my school, we noticed some teenagers milling around in the parking area and decided to stop. Soon after we got out of my car, someone grabbed the Kangol cap off my friend’s head and refused to return it. During the mild tussling that ensued, the police arrived. They immediately grabbed my friend and slammed him into my car, demanding to know what he was doing, as if they knew he were the one that started the trouble. Once they were told what had happened, the police let my friend go. I don’t recall if he got his hat back. The next school day, I was called into the principal’s office and told not to bring my friend onto the school grounds again.

I don’t want to create the false impression that my youthful run-ins with police exclusively saw white cops harassing black male teenagers. Consider another episode: While our peers attended school dances or did whatever they it was they did, my friends and I went off to punk shows in small venues around Detroit. The police abruptly ended one of those shows early. The U.K. Subs had played their full set, but before the Exploited finished theirs, the lights popped on and in the middle of a song the sound was shut off. Amid an a cappella attempt at the headliner’s anthem “Sex and Violence,” attendees were herded outside, where several ended up being pushed to the ground. Had the police received complaints about the volume, or did they just not like the looks of Wattie Buchan, the Exploited singer with a tall multicolor mohawk, and his clan as they stood outside the hall before the show? Who knows? The police weren’t in the mood to explain themselves. The punks who asked questions tended to get knocked down, regardless of their race. 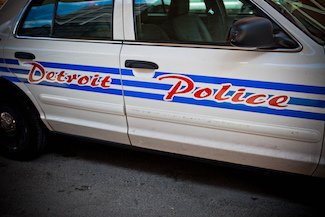 After such shows (which usually ended without the cops showing up), my friends and I regularly headed to a Denny’s not far from our favorite record store. Why we went to this particular suburban spot for coffee instead of someplace in our city I can’t say, but it was reasonably close to where we lived, and it was open 24 hours. Once, in the parking lot behind the restaurant, I stepped behind a garbage dumpster to urinate. At just that moment, a police car appeared. When asked for identification after zipping up, I handed over my high school ID. I noticed the officer’s surprise at the fact that this leather-clad pisser with the peculiar haircut went to a well-regarded parochial school with a dress code. He let me go with no more than an instruction to use the facilities inside in the future. Fortunately, my friend (the one with the hat) had been astute enough to roll the 40-ounce bottle of malt liquor we’d been finishing under the seat before the lenient police officer’s partner shone his flashlight inside the car.

These events happened long before anyone carried phones with cameras, and compared to the videos of police brutality that are all-too-common today, they were minor. My friend with the hat was treated roughly, but he was not hurt, let alone choked to death like Eric Garner would be three decades later. Yet, having seen a police officer overreact to a trivial matter and immediately resort to harsh physical restraint of an African American, in a predominantly black city like Detroit, I wasn’t surprised when I learned what happened to Garner in New York. My bike-riding friend was suspected of robbery, I have no doubt, simply because he was black, but at least he was merely questioned and let go rather than detained only to die in police custody like Freddie Gray and Sandra Bland three decades later. At least he wasn’t shot like Michael Brown or Walter Scott. Or like Tamir Rice, who when he was killed in Cleveland last year was only a few years younger than my friend was when he and I attempted to ride or bikes to the record store.

Unnecessary use of force made distrust of the police common among crowds at shows like that one the Exploited tried to play. Police harassment was so frequent at another (far superior) band’s performances that it gave rise to a song about it; Black Flag’s “Police Story” opens with these lines: “This fucking city / Is run by pigs / They take the rights away / From all the kids.” Lashing out at anyone who does not immediately, and politely, submit to your authority is a sure way to make people question your authority, yet police seem prone to doing precisely that. (The video recording of Bland’s arrest after having been pulled over for a traffic violation gives the impression that Texas state trooper Brian Encinia became annoyed, and then confrontational, when she wouldn’t extinguish her cigarette.)

Of course, police officers don’t always resort to violence. Despite what Black Flag asserted, they don’t all “hate us.” I’m sure that one at Denny’s could at the very least have issued me a ticket, but he decided to be kind instead.

[blocktext align=”right”]Police abuse, ranging from simple humiliation to the brutality occurring now with sickening frequency, won’t stop until those who aren’t victims themselves hear, really hear, the police stories of those who have been victims, and those who currently are.[/blocktext] But would he have done the same if it had been my friend with the hat urinating behind a dumpster? After all, my friend was black (and attended a public school). I can’t help but wonder.

I also can’t help but wonder if people who have never personally experienced or witnessed police misbehavior are less likely to believe allegations of it. I don’t know if, as a rebellious teenager who wore his rebelliousness openly, I was any more likely to see police acting poorly than other teens were, but I don’t remember hearing of any school dances being shut down by surly cops. I knew people who got arrested after they actually broke laws, but I also had my friend with the bike and my friend with the hat, who broke none. I was fortunate, but I wasn’t so sheltered that I could ever assume that the police were always the good guys and that anyone who was arrested or, like Walter Scott, tried to run away must have done something wrong. I certainly couldn’t assume that those injured or killed by police must have done something to deserve whatever officers of the law doled out.

Lately, I’ve started to see young black men in Detroit wearing T-shirts bearing the Warner Bros. logo and the words, “If you see da police warn a brother.” Years ago, when the episodes involving my teenage friends occurred, Black Flag asserted, “we’re fighting a war that we can’t win” against the police. While even then I thought that was an exaggeration, I understood why they said it. Police abuse, ranging from simple humiliation to the brutality occurring now with sickening frequency, won’t stop until those who aren’t victims themselves hear, really hear, the police stories of those who have been victims, and those who currently are.