Population Ain’t Nothing But a Number: Standardizing the Size of the Great American City

By Ben Schulman and Xiaoran Li

Conventional wisdom holds that the larger the population of a city, the more successful the place must be. If the population’s growing, that city must be doing something right. If it’s withering, it must be in decline.

Seeing as so many of the feelings that are collectively construed to form a perception of a place – and inform many of the policies used to influence the design of such places – are derived from this basic fact, the question of what is actually being compared when looking at the population of cities begs to be asked.

While the health of cities is often discussed in terms of population, what’s often lost in the discussion, at least outside of certain wonky urbanist circles, is the size of cities in geographic terms. (Unless that city is Detroit, whose 139 square miles seem to be lambasted at times as one of the central causes for the city’s steady decline.) Putting density and urban design aside, simply taking a quick look at the square mileage of American cities reveals a wide disparity, from the 757.7 square miles of Jacksonville, FL to the 14.79 square miles of Jersey City, NJ.

Although cities are often judged prima facie, not to mention showered with congressional dollars via census results, based on population figures, perhaps a straight reading of the numbers isn’t a good barometer of the merits or demerits of a place given the wild variances in the geographic size of cities.

Cities are arbitrarily constructed entities with culturally loaded boundaries. So what would happen if every city shared the same geographic borders? Would population numbers reflect different realities? Would the perceptions of places change, defining which cities are viewed as declining or prospering?

To try and answer these questions, we decided to conduct a thought experiment. Using census and GIS data, we sought to standardize the size of the American city and find out the population that would reside within that uniform sq. mileage figure.

Using our average sq. mileage figure, we then used GIS software to graft a 355 sq. mile radius in the shape of a box from the downtown core of select cities and metropolitan areas across the country. The GIS software compiled the population within the box to arrive at a population figure if all cities were sized to the average. For example, we set our zero coordinates at the intersection of State and Madison Streets in the heart of downtown Chicago and drew out a 355 sq. mile tract from there, compiling the population figures within the newly drawn perimeter of the standardized-sized city.

Here are our results:

A few interesting findings immediately pop out. Redrawn at 355 sq. miles, Chicago’s population jumps over 3 million, a number last crossed in the 1980 census. Some quirks of geography and the presence of independent enclaves reveal that some cities can see their footprints shrink and their populations grow, such as San Antonio. Conversely – and perhaps tellingly, revealing how arbitrary the process of drawing borders is – New York’s population would shrink by over 150,000 even as its sq. mileage increased. [Note: Obviously, drawing cities at a 355 sq. mile box is just as capricious as present practices. It does however offer a framework in which to view cities as comparable units of analysis.] 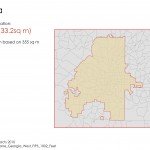 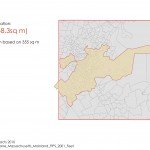 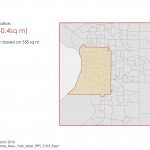 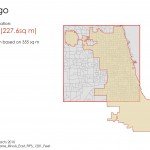 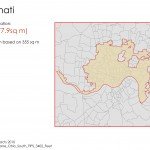 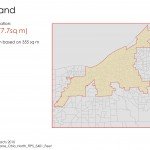 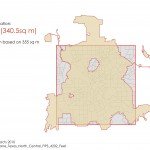 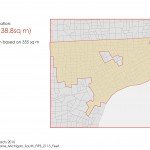 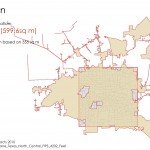 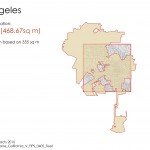 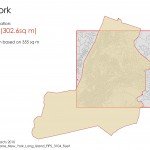 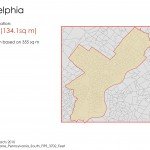 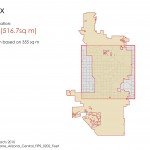 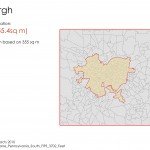 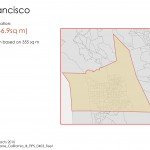 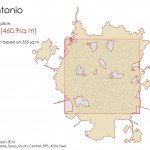 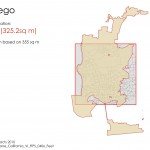 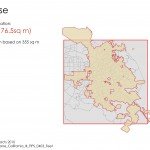 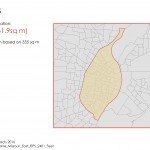 Where the altered numbers are most revealing though is for cities constrained by the legacy of their geographic confines. Enter the Rust Belt City.

For Rust Belt cities who have experienced massive population loss and whose recent histories read as exemplars of post-industrial urban failure, the numbers seem to reveal a story of dispersal, rather than absolute decline. (A few years ago, the Buffalo-based planner Chuck Banas delved into this very issue.) Rust Belt cities taken at the standardized size no longer look universally like dying vines, but rather large agglomerations of people positioned at the same relative scale as more “successful” urban areas.

These points do not negate the economic insolvency and vacancy that plague certain neighborhoods that reside within the current, or imagined, bounds of Rust Belt (or otherwise) cities. And it should be noted that these findings and discussion offer nothing in terms of concrete policy prescriptions, nor do they posit that any particular form or design typology serves cities in a more beneficial fashion. Nor, although the numbers would seem to imply it, do we state that a certain density per sq. mile is essential for success. The authors may have opinions to share on such matters, but all elements of those discussions are topics for other debates.

What this exercise illustrates is that popular opinion puts a lot of faith into a metric that in actuality reveals an inaccurate depiction of the places condemned as shrinking and failing, and for that matter, as growing and successful. These assumptions tend to have a disproportionate effect on Rust Belt locales, as population trends that in reality point towards transference are read as absolute indicators of a place’s worth, or lack thereof.

What would it mean if cities were redrawn at a standardized scale?

A lot more goes into economic and human development than just geography, but if the city were standardized at the same geographic scale, it may affect the perception of place in terms of what economic geographer Jim Russell has deemed “the mesofacts.” Mesofacts relegate a place to the constraints of its own history, even if the reality of the present paints a different picture than the overarching popular narrative that defines it.

A simple exercise such as this, altering the lens in which population is measured, could help challenge the outdated narratives that reinforce negatively-charged imaginaries of what we think places to be. Doing so may help governing bodies on the federal, state, regional and municipal levels design policies that are attuned to the realities of what places are, and therefore, comport themselves to more realistic notions of what should be done to address their attendant problems.

Ben Schulman is the Communications Director for the American Institute of Architects Chicago (AIA Chicago) and the co-creator of the Contraphonic Sound Series, a project that documents cities through sound.

Xiaoran Li is an urban planning intern for Skidmore, Owings and Merrill and a master’s student in the Department of Urban Planning and Policy at the University of Illinois-Chicago.